In its first on-campus protest in 10 months, Fossil Fuel Divest Harvard held a rally calling for Harvard to divest from fossil fuels on Tuesday afternoon.

Roughly 80 student protestors with Divest Harvard — a student organization calling for the University to sell its investments in the fossil fuel industry — staged a “visual waterline” outside University Hall to represent the rally’s focus on rising sea levels, floods, and hurricanes that have hit the United States in the past two months. Students lined up outside the building holding up a blue sheet to represent water levels.

In front of the John Harvard statue, students held several banners and signs with slogans in support of divestment. “Harvard’s gates can’t keep out rising tides,” one poster read.

In total, six current and former students delivered speeches and shared with attendees how the climate crisis has touched their own communities. Many of the speeches ended with a direct call for the President and Fellows of Harvard College and the Harvard Corporation to dump the endowment’s holdings in fossil fuel stocks and options.

University spokesperson Jason A. Newton did not immediately respond to a request for comment on the rally.

Suhaas M. Bhat ’23-’24, who has been involved in the divest movement for two years, said in an interview at the rally that he is frustrated with institutions’ failures to act to mitigate the effects of climate change.

“I go to Harvard, and I strongly believe in this institution’s mission; I very firmly believe that Harvard is one of the greatest forces for intellectual good on earth,” Bhat said. “That being said, I think that Harvard’s current investment in fossil fuels is this utterly disgusting moral failure, and I believe in Harvard so strongly that I feel compelled to say something.” 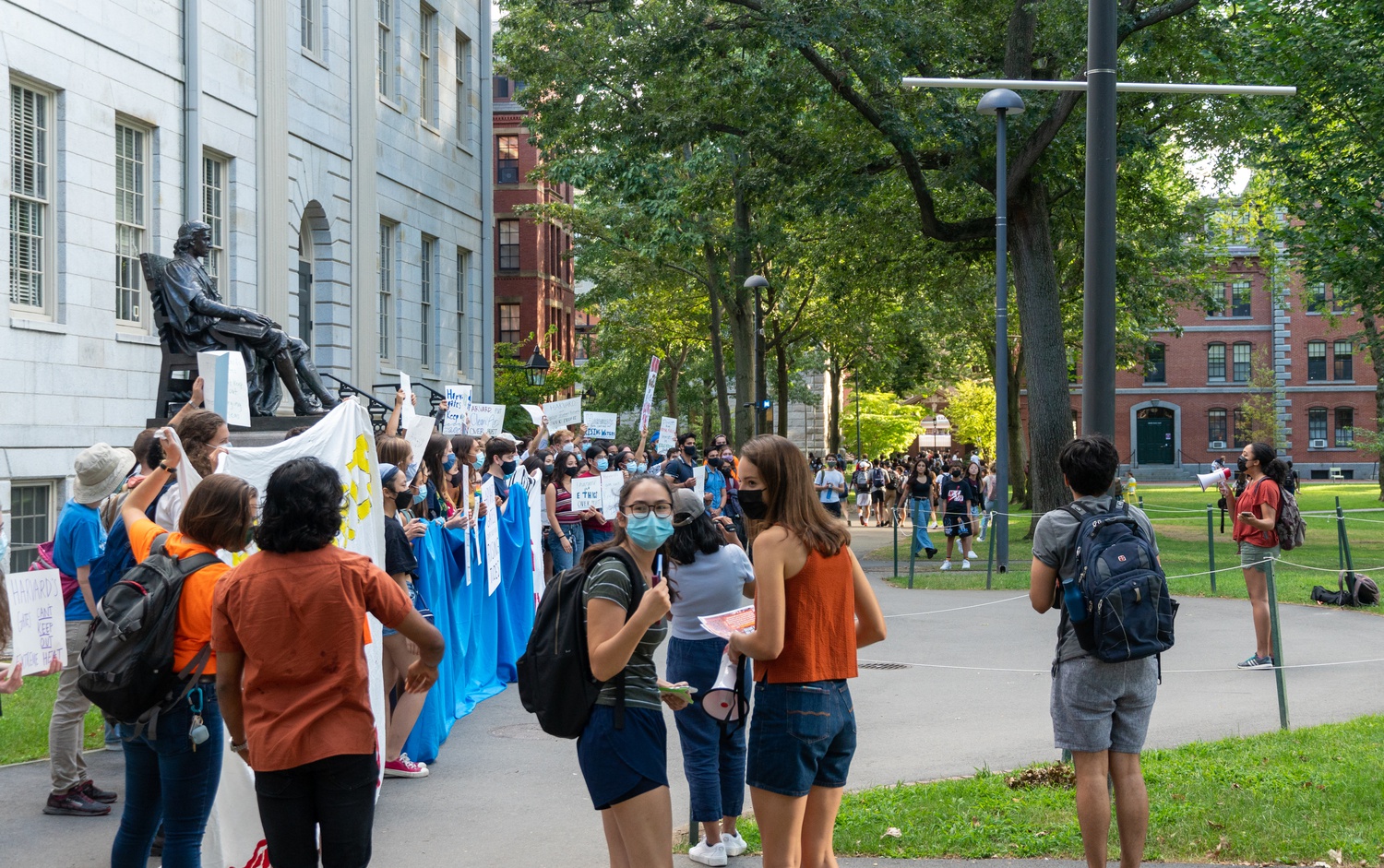 Students gathered for a rally in front of University Hall Tuesday demanding Harvard to divest from fossil fuels. By Zadoc I. N. Gee

Mai N. X. Hoang ’25, who was one of the speakers at the rally, said she chose to join Divest Harvard after learning Harvard has not fully disclosed the details of its holdings in the fossil fuel industry. The University’s investments in fossil fuels totaled less than 2 percent of its $41.9 billion endowment at the close of fiscal year 2020.

During her speech, Hoang shared how a village in her home country of Vietnam turned to solar power and renewable energy while facing climate challenges such as heat waves and rising sea levels.

“They made the sustainable choice, and that’s what we’re calling on Harvard to do,” she said.

“For so many people, including current students and students in high school, Harvard is a dream school, and I think it’s disgusting that so many people glamorize the school when they have no idea what they do behind the scenes,” she said.

Another freshman who joined the rally, Carter G. Demaray ’25, said he hopes University administrators realize Harvard Divest is not going away.