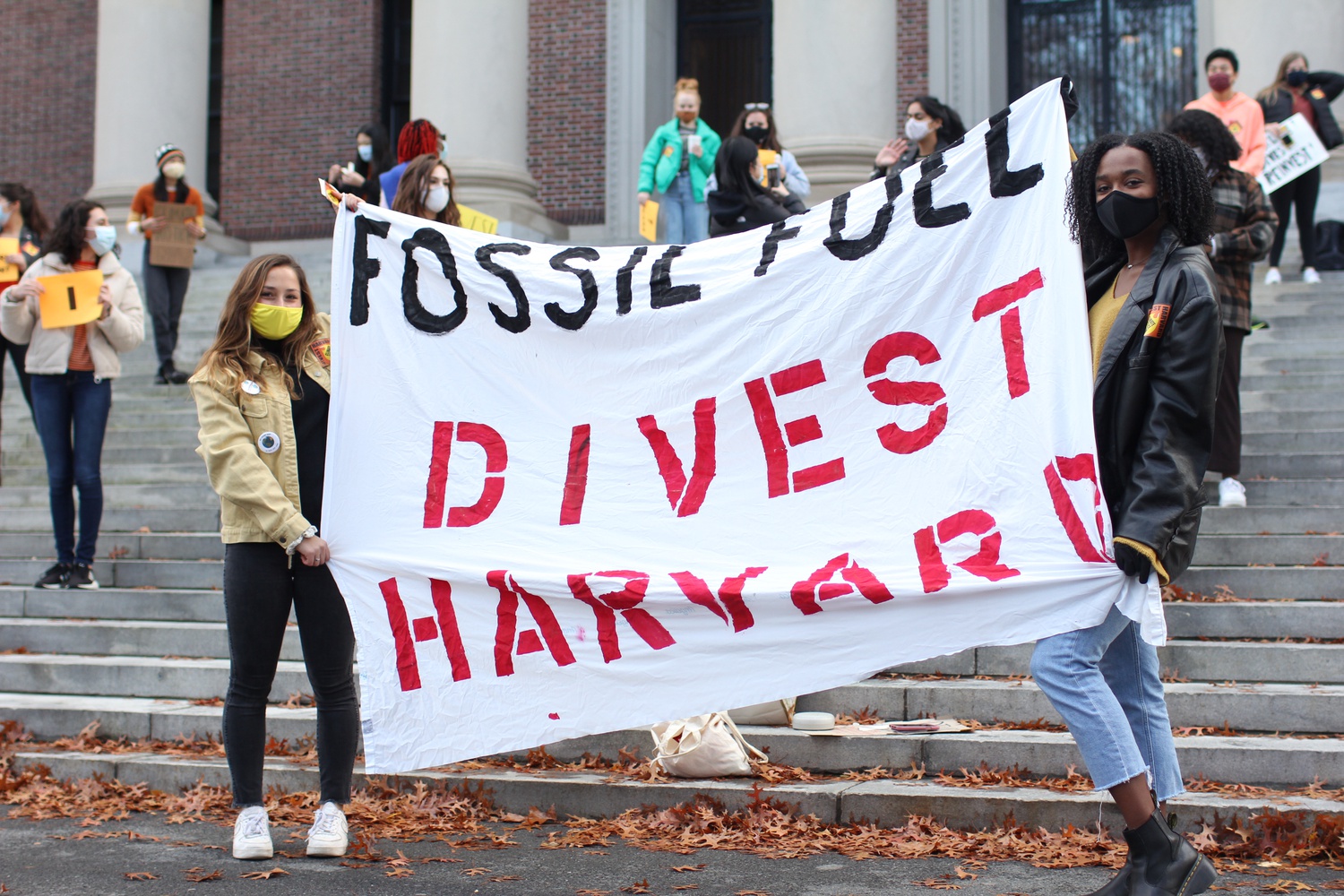 Students on campus held a pro-divestment rally on the steps of Widener Library, one of Divest Harvard's first in-person events this fall. By Claire H. Guo
By Claire H. Guo, Crimson Staff Writer

Roughly 50 freshmen gathered on the Widener steps Saturday to call on the University to divest its endowment from the fossil fuel industry.

The rally was organized by freshmen members of the student group Fossil Fuel Divest Harvard to re-emphasize the group’s commitment to the movement, even during the pandemic.

Across the steps, socially-distanced students held banners and signs with individual messages in support of divestment. After reading a statement to be delivered to administrators, organizers asked the protestors to write down their own personal reasons for supporting divestment on the back of paper signs, which are now hung up around campus.

Kari A. Traylor ’24, a member of Divest Harvard who helped organize the rally, said she hopes the rally showed the administration her class cares about divestment, even amid a pandemic.

“The role of the rally was just to say… that even if the first-years haven’t been involved in FFDH past semesters and even though we just are getting started, our class will be holding them accountable,” Traylor said. “And in the midst of this pandemic, divesting is still one of the top priorities for our class.”

Two students also delivered speeches about the climate change crisis and the need to divest.

In her speech, Klara A. Kuemmerle ’24 emphasized that students cannot become complacent about Harvard’s actions.

“It's just like this gut-wrenching feeling that the University is investing against my future, when they invest in so much for my future — like all of my classes are incredible and I feel so fulfilled,” Kuemmerle said in an interview after the event. “It’s this paradox of this University is giving me so much to live for, but at the same time, using the fossil fuel industry to kind of like bet against my future.”

“That is not something that I want to look up to when I think of my University,” she added. 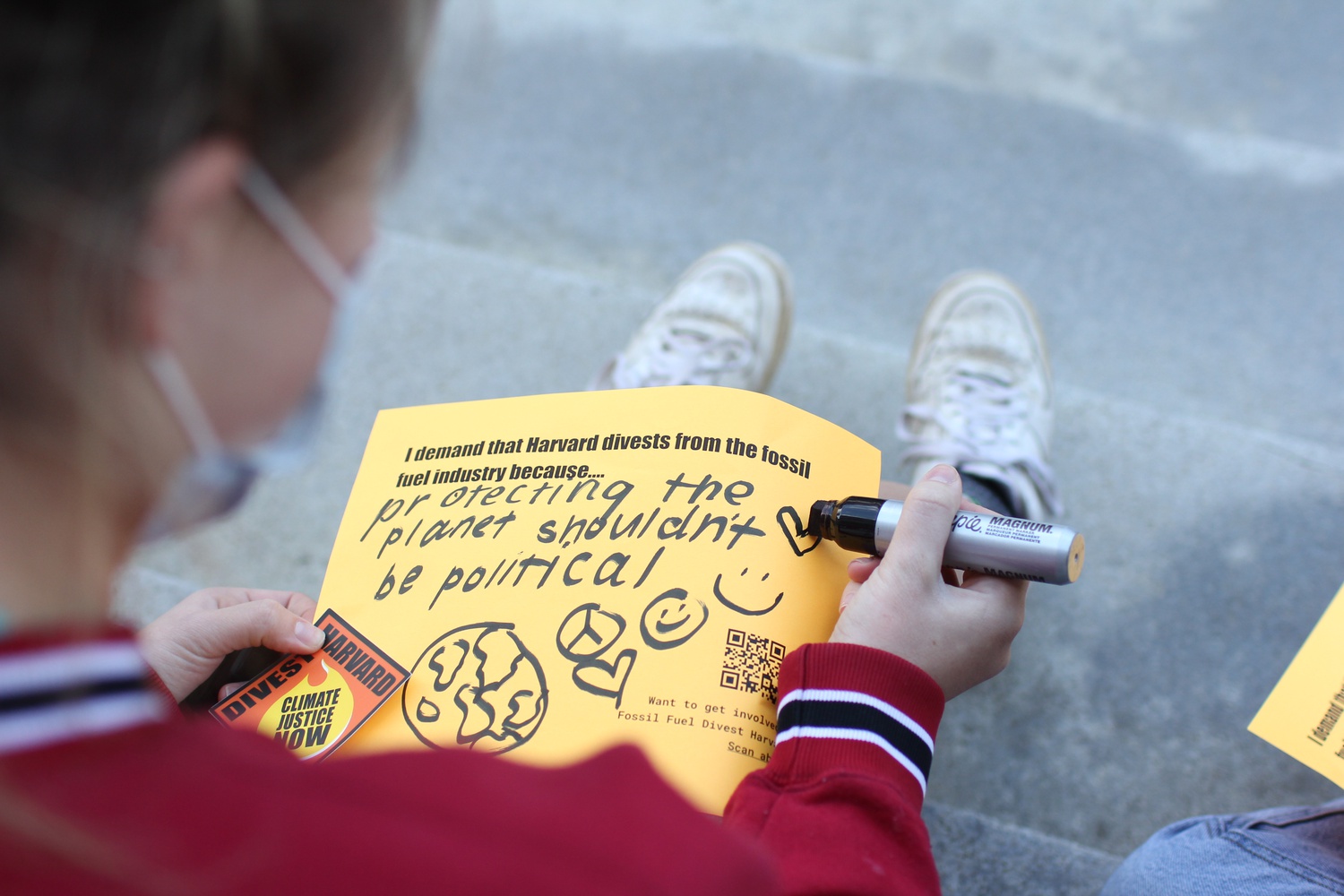 A student makes a sign at a Divest Harvard rally in front of Widener Library. By Claire H. Guo

During the rally, students sat in silence for seven minutes to represent the seven years until our current rate of emissions will inevitably result in global warming beyond 1.5 degrees Celsius above pre-industrial levels, according to New York City’s newly activated Climate Clock and calculations made by the Mercator Research Institute on Global Commons and Climate Change in Berlin.

“The clock counting down represents our shrinking time interval to avert the worst effects of the climate emergency,” Traylor said.

“While we agree on the urgency of this global challenge, we respectfully disagree with divestment activists on the means by which a university should confront it,” Newton wrote in an emailed statement. “Universities like Harvard have a crucial role to play in tackling climate change and Harvard is fully committed to leadership in this area through research, education, community engagement, dramatically reducing its own carbon footprint, and using our campus as a test bed for piloting and proving solutions.”

In addition to showcasing Divest Harvard’s commitment to their cause, Kuemmerle said she felt that another goal of the rally was to highlight the group to freshmen on campus during an online semester.

“Because of the hindrances of Zoom, it's been really hard to kind of show who we are to the freshmen and just get awareness about our organization in the first place,” Kuemmerle said. “I know so many people who walked past the rally were like, ‘Oh I didn't even know that you guys existed,’ and so to be something that people can remember and actually visualize as an organization I think is really important.”