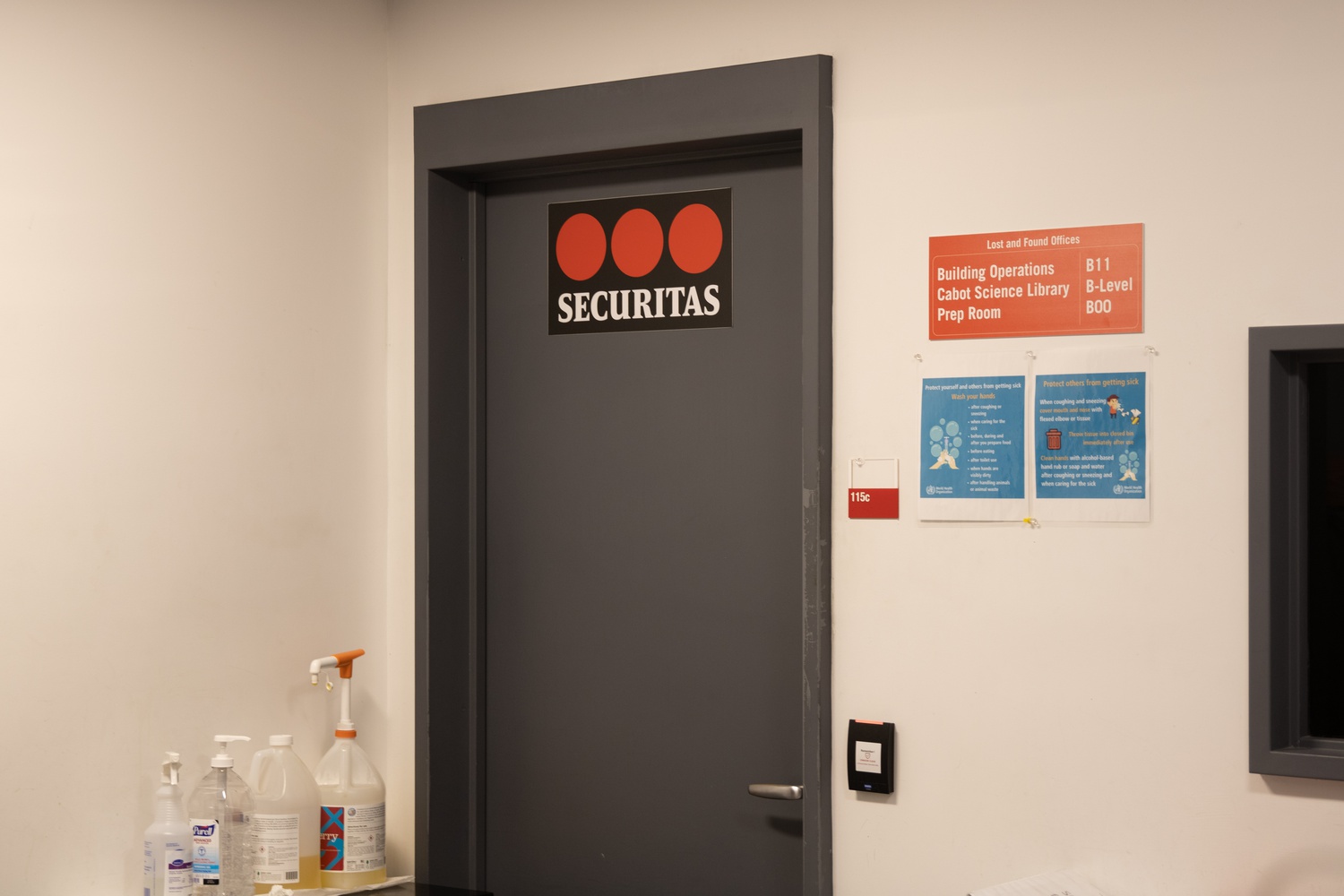 Harvard security guards, who are employed by international security firm Securitas, are at odds with their union leadership over contract negotiations. By Pei Chao Zhuo
By Sophia C. Scott and Claire Yuan, Crimson Staff Writers

When Harvard security guards voted down a contract offer from Securitas last week, it came as no surprise to members of their union’s bargaining committee.

The group, elected to represent general members in negotiations, had pleaded for weeks with leaders of their union — Service Employees International Union 32BJ — to reject the proposal.

But despite the eight-person committee’s objections, the union brought the proposal to a vote anyway. It failed, 127-84.

Tensions within 32BJ — which represents around 300 Harvard security workers and 700 custodians — have come to a head in recent months, with the union’s bargaining committee openly denouncing its leadership.

“We don’t get to have a voice at the table, even right now,” said Amel A. Ahmed, a bargaining committee member.

In interviews with The Crimson this week, seven members of the bargaining committee said they have been shut out of negotiations by 32BJ leaders.

“We’re just asking for fair treatment — to be represented by the union that we pay dues to — and I don’t think we’re getting that,” Ahmed said.

Bargaining committee member Michael A. Nowiszewski wrote in an email that the committee’s push for a better contract is the “the fight of our lives.”

The internal dispute comes three months after Harvard custodians, who are also represented by 32BJ, rallied in public against the union’s leadership. The rally-goers, who gathered on Harvard’s Science Center Plaza, voiced similar concerns — namely, that their elected bargaining committee was being iced out of negotiations.

32BJ is set to go back to the bargaining table with Securitas as negotiations drag into their fourth month. Guards employed by Securitas are currently working without a contract.

In a statement Thursday, 32BJ SEIU Executive Vice President Roxana Rivera wrote that the union “remains determined to reach a contract agreement that our Harvard Security Officers support and deserve.”

“When Securitas presented their offer on January 13 – nearly two months after the previous contract was originally set to expire on November 15 – they stated that this was their final offer,” she wrote. “Therefore, we believed the best course of action was to put the final offer to a membership vote.”

“Now that Securitas is aware that members aren’t satisfied with their ‘final offer,’ we are hopeful that they will come back to the table so we can achieve a contract our Security Officers are satisfied with during this difficult time for working families,” Rivera added.

But bargaining committee members say the first proposal never should have come to a union-wide vote. The committee voted 8-0 to reject the contract before it was brought to general members.

“We believe there’s more to be obtained,” Arun K. Malik, a member of the bargaining committee, said. “Our demands were not excessive.”

32BJ is one of more than 150 SEIU-affiliated union branches across the United States and Canada. Some members of the security workers’ bargaining committee have threatened to ask the union’s headquarters to step in to settle the dispute.

“If this union cannot bring some real leadership on the table, we will summon the whole international headquarters … so we can have better people to help us negotiate a better contract,” Dominick B. De Loretta said.

The union is planning to host a virtual town hall with members next Friday to discuss the state of negotiations.

Committee members argue that Securitas’ proposal fails to raise wages with the rate of inflation. They say Securitas and Harvard owe them more given that many guards have worked through the pandemic.

“We believe that we’ve gone far beyond our normal duties, and that therefore we deserve to at least break even,” Malik said.

The guards also said their starting wages are lower than other schools in the area, including MIT and Boston University.

Union members said they hope to appeal directly to University President Lawrence S. Bacow. But Bacow has previously said that the school would not intervene in intra-union disputes.

“We’re basically being left to hang dry, and we don’t know why,” Ahmed said.