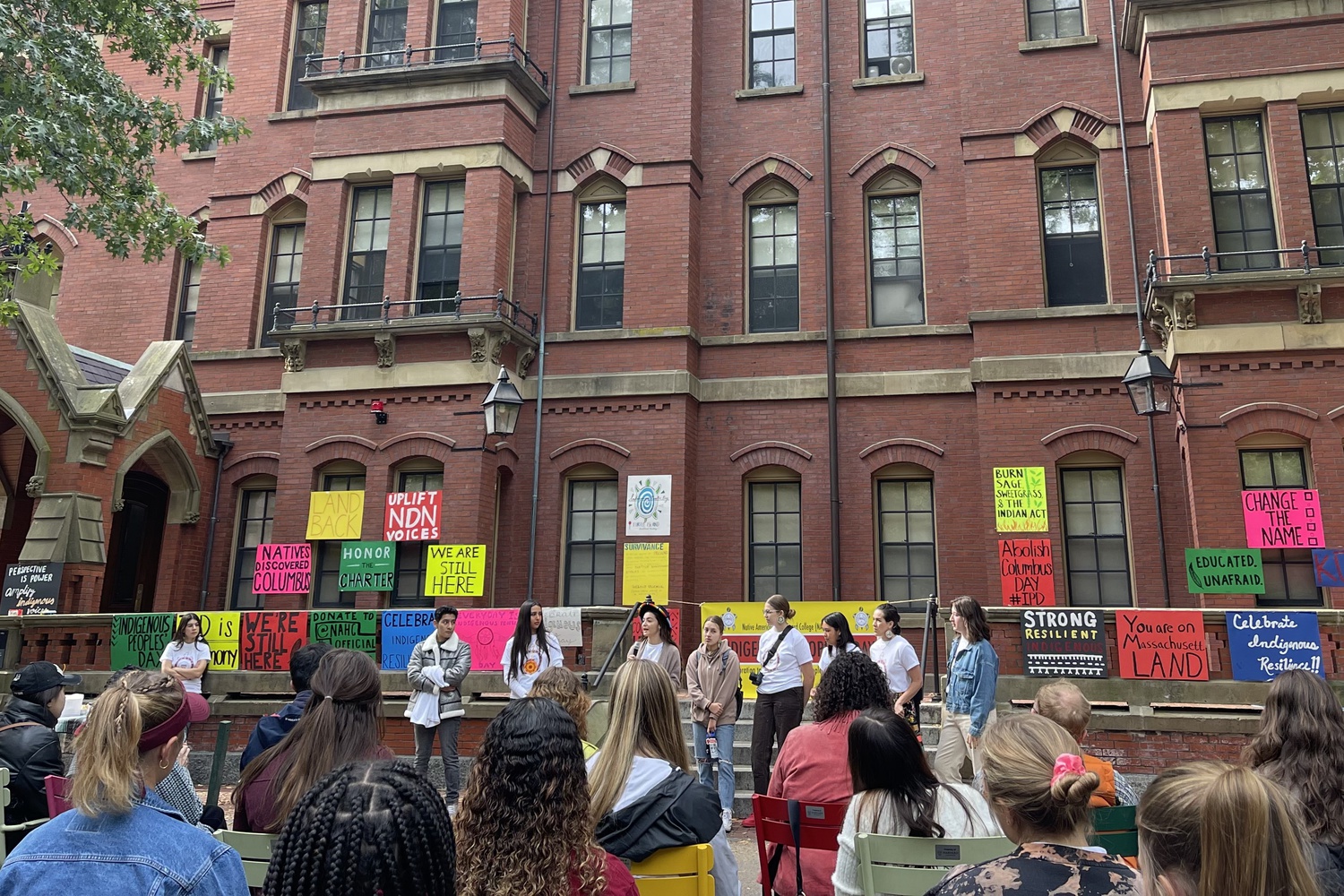 The event, held in front of Matthews Hall, featured speeches, a dance performance and snacktime to encourage community building.

In a statement, the NaHC wrote it was “so excited” about the turnout.

“IPD is NaHC’s largest event of the year, and we work for months in advance to organize for the day,” the organization’s board wrote in a statement sent via text. “Our goal is to elevate the voices of the Indigenous community on campus and emphasize the importance of recognizing, celebrating, and listening to Indigenous people.”

Jovan Lim ’25, an international student from Singapore, said the event was important to showcase Indigenous history.

“There are not many platforms in Harvard through which we can know more about the indigenous peoples community, and I’m not from the community,” he said. “Harvard has had a very tumultuous history with Indigenous peoples, and it’s important to recognize that.”

Anthony M. Trujillo, a Ph.D. candidate and History Department teaching fellow from the Ohkay Owingeh Pueblo tribe in New Mexico, said Indigenous People’s Day is a “celebration of Indigenous life and presence” and a show of solidarity towards Native students.

“This university just can’t ignore Indigenous life, thought, creativity, if it wants to be a leading institution in the next years and decades, centuries to come,” he said.

The NaHC organizers criticized Harvard, saying the University “harms Indigenous people on campus and around the globe in many” ways.

NaHC board members added that they are “very grateful for the amazing work that the Harvard University Native American Program does to support Native students.”

“The funding, programming, and community they provide really supports our community,” they wrote.

Sami E. Turner ’25, a resident of Lawrence, Kansas, said her proximity to Indigenous people in her hometown gave her more opportunities to learn about Native history and culture.

“There’s a pretty substantial indigenous population in my hometown, because of the [Haskell’s Indian Nations] University, and so I felt like there were much more opportunities to learn about the community,” she said. “But I don’t feel like, on Harvard’s campus, I’ve seen as much.”

“I don’t think Harvard has offered a lot of resources or events to talk about Indigenous history and culture, as it pertains specifically to Harvard's history,” Turner added.

The NaHC hosts other events throughout the year such as open mics, fundraisers and community meals.

Olyvia L. Snyder ’26, a freshman on the Women’s Rugby team, said she and others attended the event to support a Native Hawaiian teammate who helped organize the event.

“She has done a great job of bringing awareness to this event as a whole and to Indigenous people,” she said.