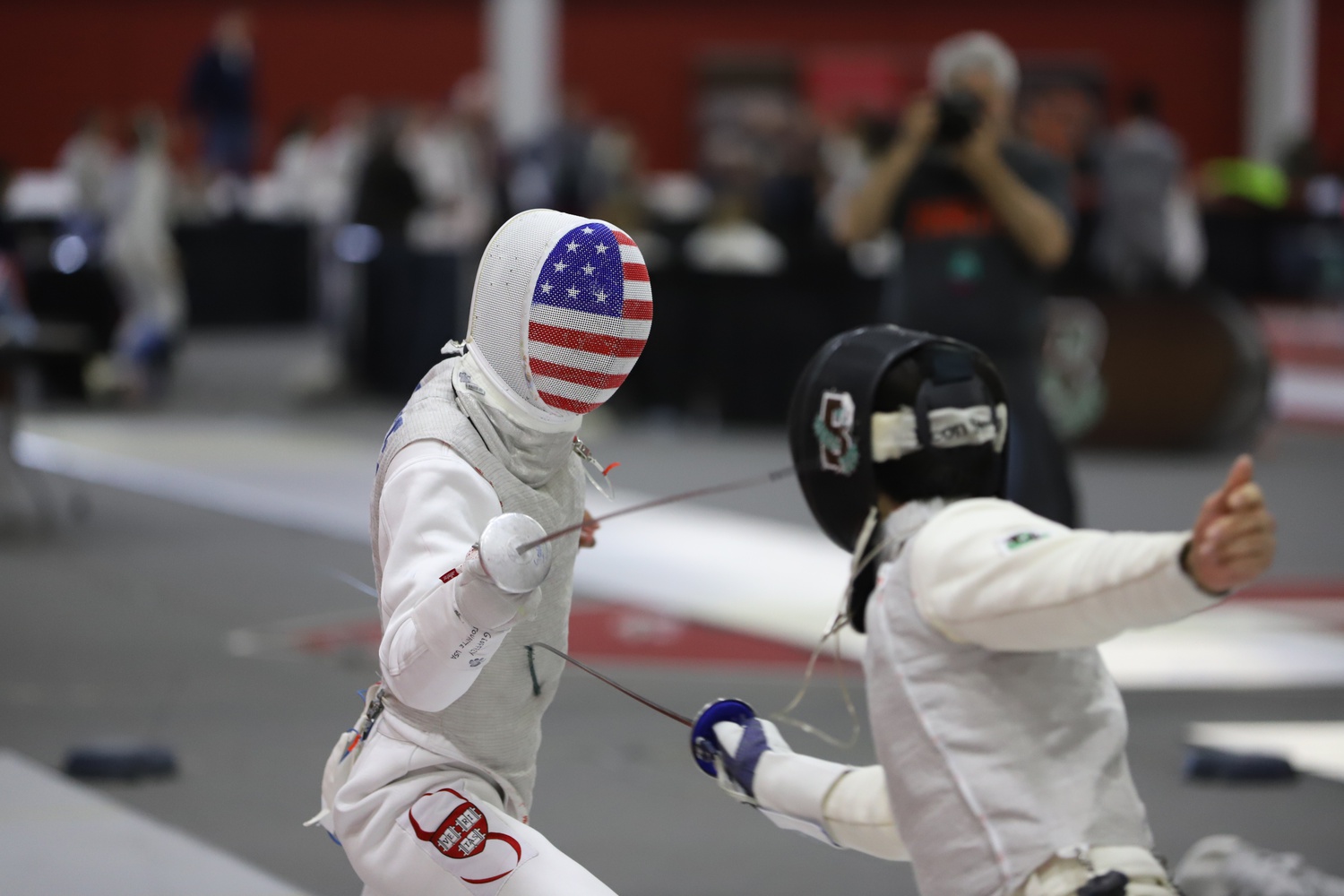 A Harvard fencer competes at the 2020 Ivy League Championships. The Crimson swept that tournament, extending a dominant run that has continued through at least the first tournament of the 2022-23 season. By Owen A. Berger
By Nadia A. Fairfax, Contributing Writer

Both the men’s and women’s fencing teams faced off against three Boston teams at the Beanpot Invitational, hosted by Boston College in Chestnut Hill on Wednesday, November 16th. The Crimson went up against Brandeis, Boston College, and MIT and came out victorious for both divisions. Both of the team’s wins make this the men’s and women’s 14th and 15th BeanPot win respectively.

The Harvard women’s fencing team (11-0) kept its undefeated record this season with a dominant day in Chestnut Hill. The Crimson’s first opponent was Brandeis (6-4), where it eventually pulled out with a win, going 25-2. The win was led by its saber team, which went 9-0 in match wins after a stellar performance from first years Zoe Kim and Chloe Williams, as well as senior captain Elizabeth Tartavosky, where each member of the team went 8-1.

“Overall, it was really nice to see us dominating and working really well together as a team,” first-year Chloe Williams said. “As always, I think the energy was really high.”

This energy from Brandeis was carried into the next match against MIT (7-3, 5-2 conference?), where the Crimson went 22-5 in its closest match of the invitational. The foil squad showed up and was led by sophomore Ever Marinelli, who went 3-0 to contribute to an 8-1 win. In the final match against Boston College, the saber and epee squads both went 9-0 in their matchups, which won Harvard the Beanpot Invitational for the 15th time in a row.

Throughout the match, team camaraderie and support from teammates helped the Crimson to victory.

“I think overall, one of our big values is professionalism,” said Williams about the mindset going into the invitational. “I specifically remember right before the meet with our head coach, Daria, was reiterating how important it was for us to have good energy and good discipline throughout the match. I think all of us keeping that in mind and really focusing on one touch at a time and not thinking too ahead throughout the matches really helped bring out the win.”

Tartavosky especially helped to make a huge impact, winning nine of her bouts alongside teammates sophomore Emily Vermuele and Kim.

“I think [Tartakovsky] obviously had an amazing performance, but even outside of her scores, I can always hear her words of encouragement while I’m fencing,” Williams said. “I remember right before my last touch, I could hear her saying, ‘Lock in Chloe. Have confidence and energy’ from my first touch. I think her doing that, especially for our squad specifically, really helped a lot.”

Harvard’s three wins makes it 11-0 this season. Looking forward to future invitationals, and even the national championship, the Crimson hopes to keep its winning streak alive.

“I think Princeton’s team is pretty strong,” Williams said. “But I think either way, we’re prepared. We’re putting in the work that we need to be doing to get ready for those matches. We’re in good shape for the season, so I’m excited to compete against them.”

While the women’s side had a spectacular showing at Beanpot, the men’s squad also had a victorious day, taking its 14th consecutive Beanpot win.

The men’s team (9-1) faced off Brandeis (5-3) as its first opponent, taking it down 18-9. Sophomores James Chen and Justin Liu of the foil squad led the Crimson, each going 3-0.

However, the most noteworthy match of the day was when the Crimson went up against MIT (5-3, 4-1 Ivy League and defeated the Engineers 22-5. The saber squad led Harvard to victory, with sophomores Anthony Malysz and Mihir Kumashi from the epee squad both going 2-0 in their matchups to secure a win.

“I’d say with the MIT fencers, they have a very unique style and are very aggressive from the start,” Chen said. “They don’t give you a break to reset after an action.”

Harvard’s final match of the day was against Boston College and ended in a 17-10 win. The saber squad helped the Crimson with this victory as seniors Filip Dolegiewicz and Daniel Solomon secured three wins and ensured that the Beanpot trophy would return home to Harvard.

During all of its competitions, Harvard has kept the same high intensity.

“I’d say we definitely stayed focused throughout the whole competition because in the space of five captures, anything can happen, so we definitely fenced to the level that we trained,” Chen said.

“Our team is getting stronger and stronger,” Chen said. “Every week it’s like we beat our own team from a week ago. Columbia is a very strong team that I’d say is our biggest competitor in the Ivy League. I’m super pumped to face off with them and super pumped to see Harvard bring its A-game.”