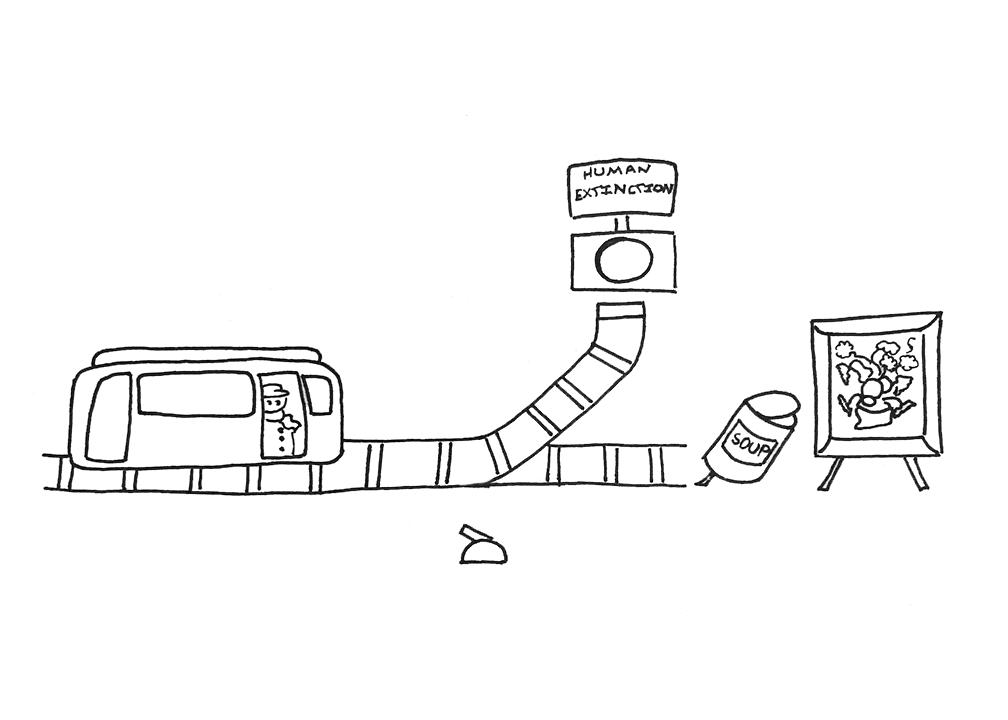 One October afternoon, as has become habit, I found myself walking to a nearby coffee shop between classes. Amid all the busyness of life, I have gratefully welcomed these momentary, unscheduled strolls. They promise time for reflection, a chance to feel the autumn air as it gradually cools and yields to winter, and, of course, a warm, tasty beverage to stave off a caffeine-deprivation-induced headache.

On this particular autumn day, I especially welcomed the chance to let my mind wander — I had just read about yet another set of climate activists throwing food at famous paintings, and as I began to process my initial shock and anger, I was beginning to find this form of unconventional protest intriguing.

As someone in love with the visual arts, the sight of a van Gogh drenched in tomato soup or a Monet coated in mashed potatoes had my stomach in knots. But equally troubling to me was the ultimatum one of the climate activists professed: Art or life? A moral quandary as profound as this one should neither be problematized nor answered in so few words. When the food was cleaned and the paintings restored, the difficult question of art or life lingered. I had to deal with it.

I do not find this question pressing because the answer is obviously life; rather, I find it pressing precisely because I have a sneaking suspicion that maybe it isn’t. Part of what makes life worth preserving is that life is valuable, and it’s hard not to feel that what makes human life valuable is our species’ profound legacy, artistic creation included. Sure, these protests targeting art come at a time when the planet is quickly inching toward inhabitability, and one could argue that they shed light and urgency on the climate crisis. But putting the politics aside for a moment, I invite you to consider the complex debate over the values at play.

The age-old question of balancing moral judgments evokes a philosophical classic: the Trolley Problem. In the classical construction, a trolley is about to run over a few people tied to its tracks. You can save their lives only by pulling a lever, diverting the trolley onto another track where it will run over just one person instead. In the situation at hand, it’s as though a trolley is barreling toward a button that, if pushed, will realize the suffering and eventual extinction of all of humanity, and the only way for us to divert its path is throwing humanity’s most valuable creations on the tracks.

To me, it’s not obvious how we should act. If we do choose to save human life, letting the trolley destroy humanity’s finest work, we corner ourselves into a conclusion not unreasonably felt incorrect. Is a desert society that can last long into the future, devoid of all that makes human culture what it presently is, more valuable than the short-term existence of all we have grown to love about our absurd, vibrant species — more valuable than our paintings, sculptures, music, food, traditions, strolls to buy coffee? My intuition tells me no.

But it seems some activists would answer life and mean it. Some would say that a world without art would be justified if it meant humans would have a few more centuries on their beloved planet. And as much as I cannot seem to share this sentiment, I can’t shake my empathy for it, either. The tomato soup throwers are but another part of the culture I admire so profoundly — a culture that is often political. Rarities, they remind me of Franz Kafka’s Gregor Samsa who, after metamorphosing into a bug, finds himself condemned and on the outskirts of a society once home to him. They are another idea in humanity’s bottomless reservoir of emotional and creative capital, competing to survive, sustain itself, and make itself heard, just like the rest of the world.

How could I condemn such a fundamental facet of humanity’s beautiful absurdity? I feel I cannot.

To be clear, I'm not advocating for or against these protests. I know that they do not, in actuality, represent a dichotomous choice between art and life, and indeed, that they did not intend to destroy the targeted artworks. And I know that preserving the world also allows us to continue the production of art. All I mean to say is: A certain beautiful irrationality makes human life what it is, and to condemn irrationality in favor of our rational, pragmatic stratagems for preserving life, effective as they may be, would be to miss something innate to humanity’s value.

Especially at a university where being apolitical feels like a crime, we carefully weigh our options to ensure we act according to the values most dear to us. For some, this may include engaging in unconventional forms of protest. For others, it may mean remaining uninvolved. Whatever side we end up endorsing, we must acknowledge that hypocrisy and irrationality are inevitable, as much a staple of our species as the creativity that has allowed us to paint Sunflowers and Grainstacks. Maybe at the end of it all, there’s something to value in the disagreement — as much beauty, strangely, in the discord and quagmire as in what each of us views as progress.