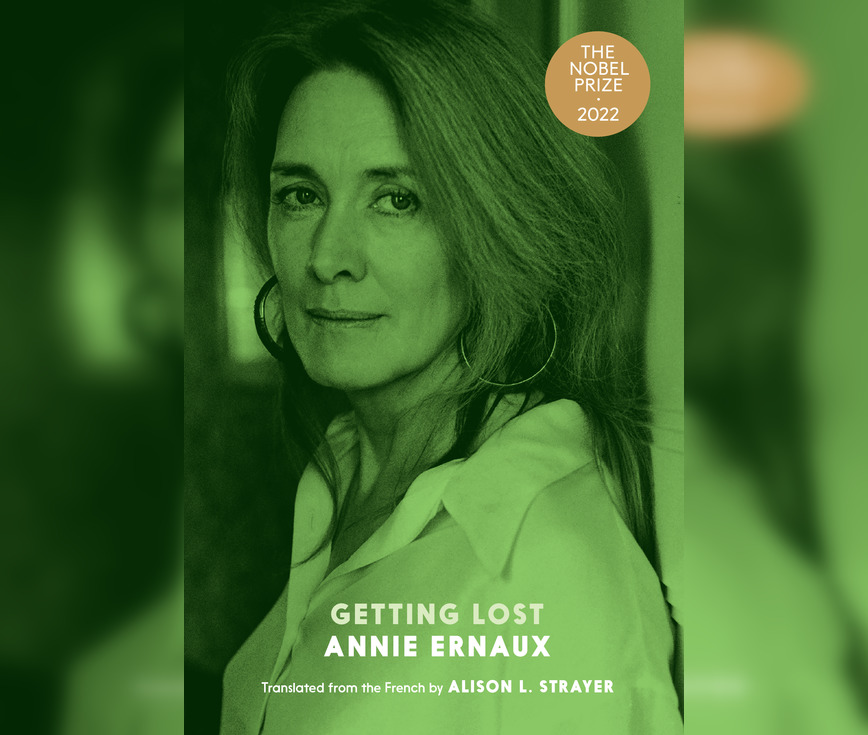 The cover of Annie Ernaux's "Getting Lost." By Courtesy of Seven Stories Press
By Carmine J. Passarella, Crimson Staff Writer

Writer Annie Ernaux was awarded the 2022 Nobel Prize in Literature “for the courage and clinical acuity with which she uncovers the roots, estrangements and collective restraints of personal memory.” Nowhere does that ring more true than in “Se perdre,” Ernaux’s 2001 French-language novel translated into English this year by Alison L. Strayer.

“Getting Lost” is a collection of Ernaux’s journal entries from September 1988 to April 1990, artifacts of her intense and one-sided love affair with a married Soviet diplomat. The diplomat, referred to as S, loudly dons Saint Laurent and Guy Laroche yet relies on Ernaux for packs of Marlboros; he is younger and actively avoids reciprocating her romantic affections.

The man himself is nothing special. He leans unflinchingly into the stereotypes of Cold War-era envoy and disavowed lover. Alongside Ernaux, especially — a woman who was already decades into an established literary career at the start of their entanglement — he appears even more unremarkable. S’s attitude lays the groundwork for Ernaux’s book, as she incisively recounts the metaphorical chokehold that an ordinary, inattentive lover can have on their partner.

A major feeling that pervades the novel is that of being reduced. Reduced to docility and servitude; to the role of a supportive, slender mistress in his presence and, in his absence, of a wide-eyed girl wasting the day away waiting for a phone call that may never come.

S was not the first man to provoke such behavior in Ernaux. She recalls similarly enchanting men from her earlier years with wistful nostalgia, as well as her ex-husband — though with much less affection. These flashbacks come with a sense of dreadful anxiety: Ernaux questions why she is like this, and if she will ever stop. What is it about her, or about these men, that forces her into a supporting role in the story of her own life, even if only for a while?

It’s a fascinating question to observe a human being grappling with, made even more fascinating by the journal entry format. These entries — meticulous reflections of the day’s events or attempts to gather Ernaux’s lovelorn thoughts — were not intended to be read by anyone else. Aside from necessary revisions like obscuring identities, these entries remain timeless testaments to Ernaux’s reality at a given moment.

In this way, “Getting Lost” is the closest one can get to observing an author’s thoughts as they develop in real time. Ernaux’s self-awareness and shrewd writing make her the ideal subject for such an exercise: The reader can be assured that the feelings she conveys are wholly authentic, and their nuances are unforgotten, represented as best as possible by the words on the page.

The book is suitable for anyone intrigued by such an exercise, but will be more biting for those who can relate to Ernaux’s position of unrequited lover. A major triumph of the novel is that it shows the reader what it looks like to make space for the shameful and worrisome parts of oneself; those who have been in her position may see some of these parts of themselves reflected in the text.

“Getting Lost” might also strike a particular chord with women. She calls back often to her identity as a woman, questioning the extent to which it’s shaped her personality and caused her to become an obsessive romantic partner.

Whether or not this English-language translation captured the precise essence of Ernaux’s every sentiment is yet to be seen. But Strayer, Ernaux’s latest translator, works very hard to disentangle emotionally and linguistically complex constructions at every turn, in addition to providing footnotes that helpfully contextualize Ernaux’s shorthand as well as the historical background of the time.

At the end of the day, Ernaux’s soul-bearing source text and Strayer’s expertise combine to produce a resounding, gripping work of art that proves to be more than worth its weight in salt. What could have been nothing more than a personal diary detailing a secretive and ultimately inconsequential mid-life love affair has, by virtue of excellent storytelling, become a representation of what it means to be human, in all of its embarrassing and reductive glory.