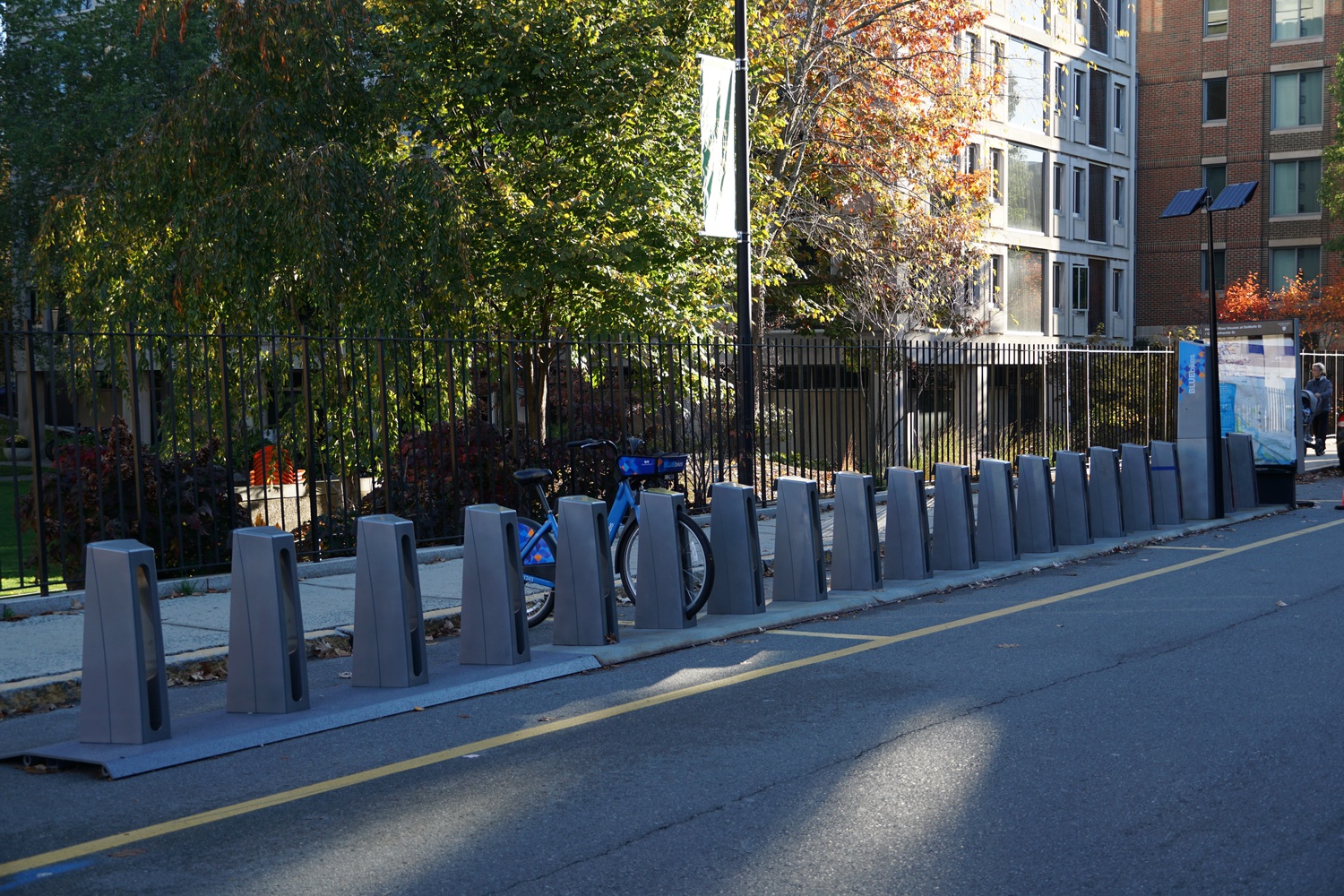 A lone Bluebike populates a station near Leverett House. The growth of Boston's bikeshare system hasn't come without logistical challenges — chief among them a mismatch in supply and demand between stations. By Claire Yuan
Advertisement
Advertisement

Solving the Wheelie Hard Logistics of the Boston’s Bluebike System

Bluebikes — Greater Boston’s dock-based bikeshare system — was first installed in Cambridge in 2012. Now the fleet is over 4,000-strong, divided between more than 400 dock stations around Greater Boston and enabling residents to travel affordably and sustainably.
By Nicolas Dominguez Carrero and Julian K. Li

As the sun rises over Harvard’s campus, thousands of stressed students, restless tourists, and groggy Cambridge residents begin their morning commutes. Out of this blurry sea of movement, an azure figure emerges, weaving in and out of the traffic.

Bluebikes — Greater Boston’s dock-based bikeshare system — was first installed in Cambridge in 2012. Now the fleet is over 4,000-strong, divided between more than 400 dock stations around Greater Boston and enabling residents to travel affordably and sustainably.

The Cambridge City Government, the Metropolitan Area Planning Council, and twelve other municipalities in the Greater Boston area work to coordinate the system. The collaboration has “resulted in one of the most highly-utilized bikeshare programs in the country,” Susanne Rasmussen, director of environmental and transportation planning in Cambridge’s Community Development Department, wrote in an email.

Of course, this growth hasn’t come without logistical challenges — chief among them a mismatch in supply and demand between stations. Hidden behind Bluebikes’ fairly straightforward user experience is a complex operation, running day and night to keep bikes rolling and stations stocked.

Currier resident Shiv Chandra ’24 is one of the many riders for whom Bluebikes are a main form of transportation. Though Chandra “didn't really know how to ride a bike until sophomore year of college,” he realized Bluebikes could alleviate the isolation of the Quad.

The Quad boasts proximity to two Bluebike stations. On most mornings, Chandra unlocks a bike with the Bluebikes app and pedals haphazardly to class.“I’m cutting across streets, not stopping on reds,” he admits. “As a Bluebiker, I take it as if I am both a pedestrian and a car.” By now, he’s ridden over 140 miles, according to the app’s tracking.

But Chandra’s biggest qualm is the discrepancy insupply and demand of Bluebikes across different locations. Once, while running late for lunch by the Charles, Chandra had to bargain for the last Bluebike with a fellow Quad resident, only to arrive at the River and find a full station with no spots to dock his bike. “I ended up biking back to the Quad, parking back there, and then walking back,” he says. “It took me half an hour.”

The Bluebike system has grown tremendously in popularity over the last ten years as Boston and its neighbors expanded alternatives to carbon-heavy forms of transit. But even with increased supply, certain stations — especially those near Harvard and MIT — are busier than others, creating a need for a streamlined organization system behind the scenes.

Bluebikes workers are organized into three teams General Manager Dominick A. Tribone terms the “three-legged stool of the Bluebike operation”: one dedicated to maintaining the bike fleet, another for the stations, and one for service delivery. The workers are contracted through Motivate, a Lyft-owned bike-sharing logistics company that operates many major bikeshare systems across the country. 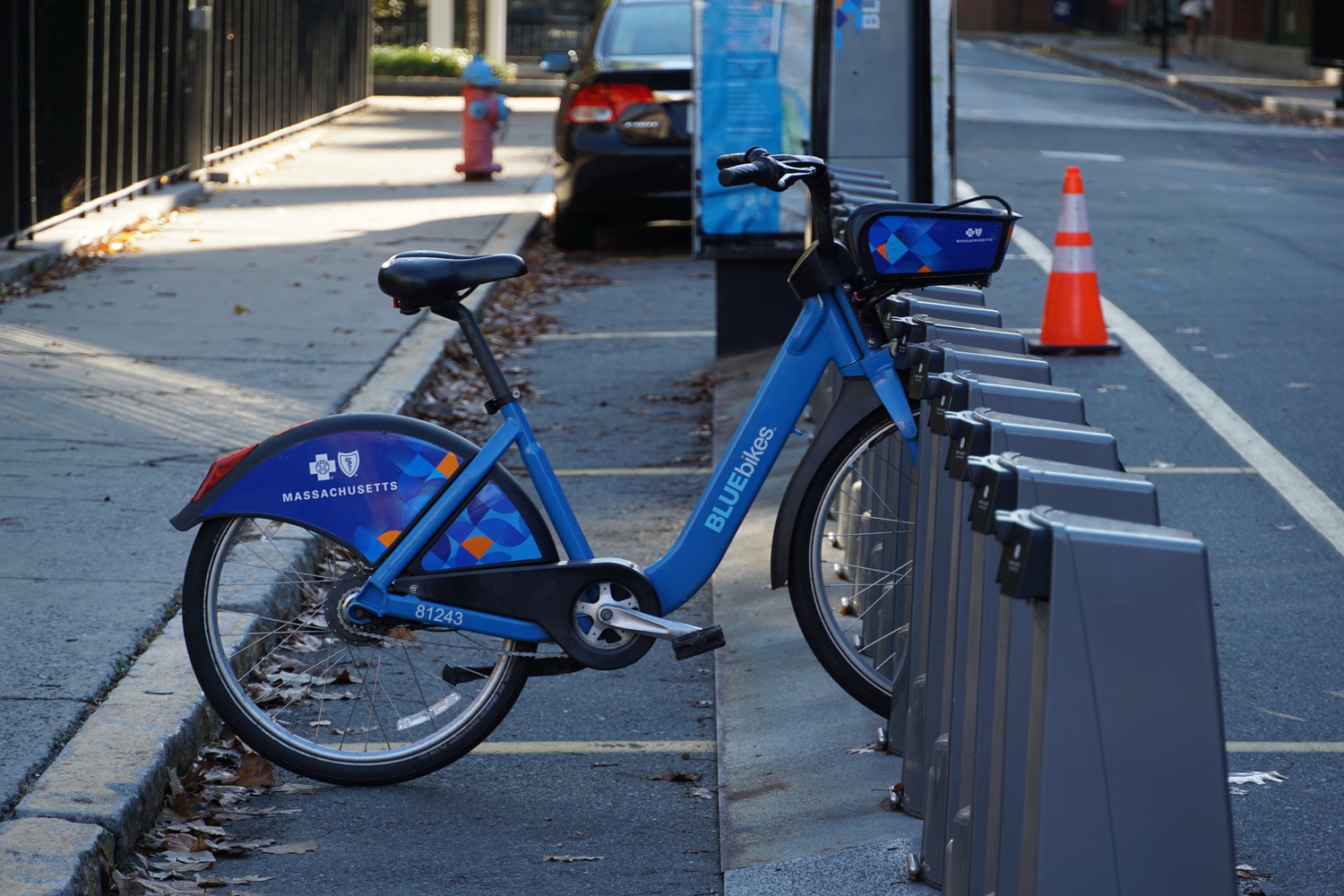 Battered by Boston’s weather and reckless riding, it’s difficult to keep the Bluebikes in perfect condition, but the bike fleet team makes sure they remain rideable. Split between a mobile team that performs light fixes out in the field and a depot team that services heavier repairs, the mechanics ensure each bike is assessed every 45 days or immediately if a user reports an issue.

Luckily these fixes are purely mechanical; Unlike bikes in other cities’ dockless bike share systems, Bluebikes do not contain any digital technology like embedded GPS chips or power sources.

“One of the beauties of the system is that the bikes are completely dumb,” Tribone says. Even the lights on the bikes do not require a battery, powered instead by electricity generated from the spinning of the front wheel. Keeping bikes “dumb,” or mechanically basic, simplifies the system by consolidating all the technology for locking and ride-tracking in immobile dock stations.

Often seen around town in their royal blue logoed vans, the service delivery team handles retrieving lost bikes, most of which are just improperly docked.

Tribone notes that the majority of missing bikes are rented for single trips by people unfamiliar with the system, emphasizing that informational outreach initiatives will help solve the problem.

An imbalance of bikes between stations, which leaves riders like Chandra unable to find a bike at empty stations or dock their bike at full ones, is also tackled in part by the service delivery team.

Tribone attributes this issue to “peaky flows” — where parts of the city have significant inflows and outflows of people at different times of day — that arise from variations in land use. For example, Kendall Square has a lot of commercial spaces and relatively low residential land use, resulting in a massive inflow of workers in the morning and a massive outflow in the evening. This trendovercrowds docks early and leaves them emptylater in the day. Similarly, stations at the Quad empty as students travel from dorms to class, filling up stations by the Yard.

High-traffic stations may employ a valet, who can take bikes off the dock and stash them on the side to temporarily increase the bike capacity of a particular dock. Bluebikes also loops in users: riders can sign-up through the Bluebikes app to be a Bike Angel, where you can earn trip credit for taking bikes from crowded stations and riding them to empty ones. Bike rebalancing vans run 20 hours a day to move bikes from full stations to empty ones, responding in real time to changes in demand observed from station data.

Despite these rebalancing efforts, Tribone concedes that more permanent solutions to system-wide imbalances are needed.

“One of the fundamental tenets of a bike share system is that it's going to reduce car usage in dense places but we have to use vans to move the bikes around,” he says.

But the solutions to some of these problems lie outside of the scope of Tribone’s team and instead in the hands of local government entities.

For Cara Seiderman, Transportation Program Manager at Cambridge’s Community Development Department, one solution to the supply bottlenecks includes expanding the system.“Our goal is that there is a Bluebikes station within one-eighth of a mile of every resident or worker,” she wrote in an email.

“Not everyone can peddle a bike constantly,” Zondervan says. “Having an electronic assist can make the bikes available to a larger group of people.” He also points to peddle bikes and scooters as other more accessible options.

But a complicated system with many moving parts has stagnated new initiatives, he admits.

“It's not so easy for us to just snap our fingers and have something different. It's a contract that involves multiple cities and towns which further complicates making changes,” he says. “If we introduce E-bikes, how does that work with other cities and towns if they don't want to approve it?”

Despite these complexities, working with other municipalities “to create and operate the bikeshare system across municipal boundaries has been enormously positive,” Rasmussen wrote. In the face of climate change, which transcends political boundaries, this kind of collaboration could be “a model for how other regional mobility services could be provided in the future,” she adds.

After more than a decade in Cambridge, Bluebikes are now an indispensable service for many Cantabrigians. The click of bikes docking and undocking is a fixture, and while the City works out the kinks in the logistics of their fleet, Chandra has advice for students looking for a Bluebike amidst supply gaps. “Selfishly, don’t go near them,” he says. “They’re mine!”