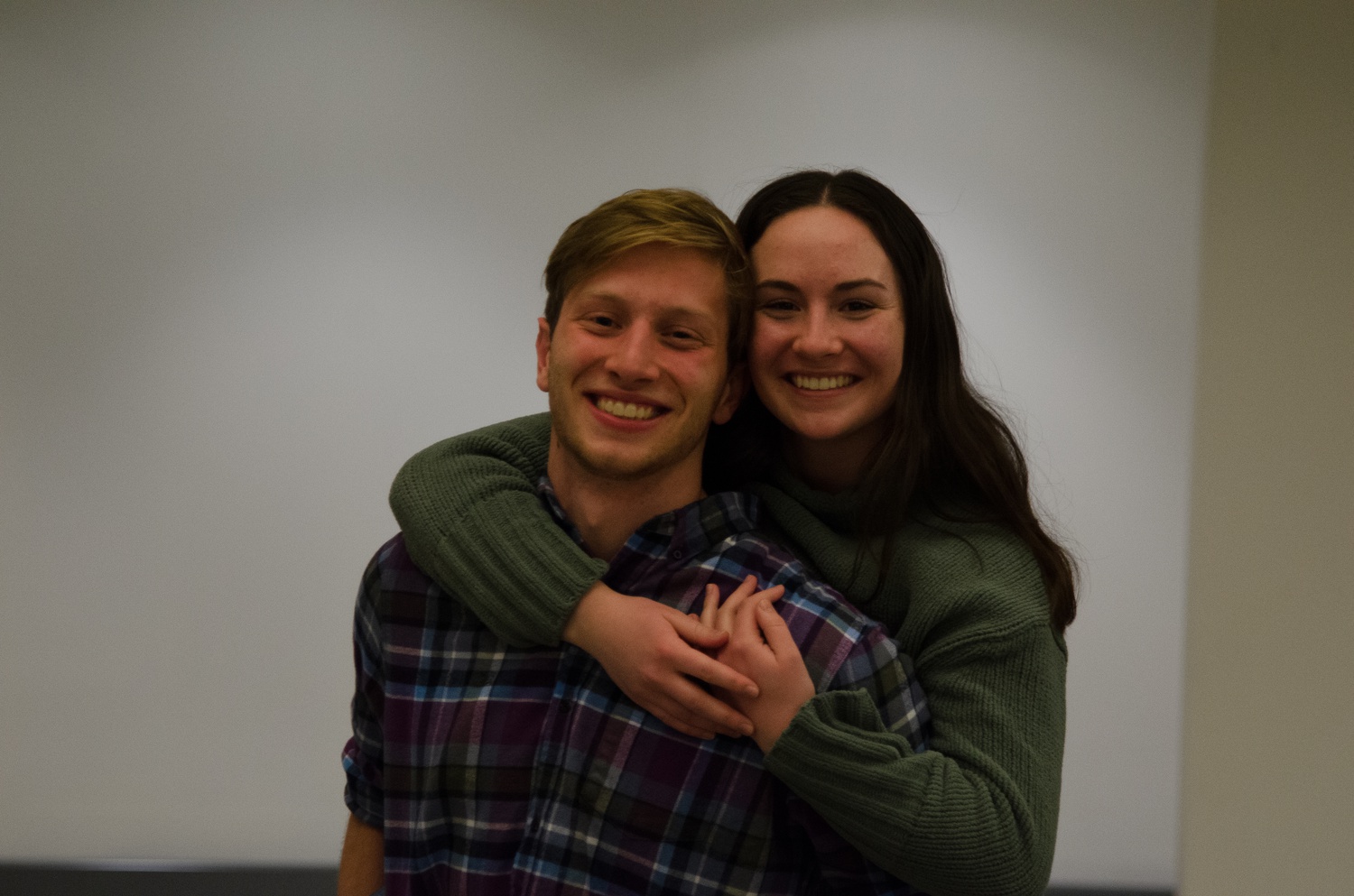 In the basement of the Northwest Building, the bright red plastic desk chairs are the only splash of color amid dull gray concrete floors, plain white tables, and bare walls. But Chris P. Wirth ’23 and Amy E. Benedetto ’23 see more than an austere room — they see the place where they bonded over lunches, raced chairs when they got tired of studying, and began their three-years-and-counting relationship.

Wirth and Benedetto met during a section of Math 23 the first week of freshman year, but they lost touch after Wirth was assigned to a different section. They only reconnected after running into each other at a party in Pfoho’s Igloo and exchanged contact information.

After they started talking, Benedetto decided to make a “bold move” and invite Wirth to her performance with the Harvard Ballet Company. “Most guys in college probably wouldn’t want to come see a ballet show,” Benedetto says. “So I was fully expecting him to be like, ‘Oh, no, I’m busy.’”

Instead, Wirth showed up early, sending a picture of his ticket when he found a seat and giving her flowers after the show. Soon after the performance, they started dating.

Midway through their freshman spring, though, the pandemic struck, so they did a year and a half of long-distance. During their virtual sophomore year, they both returned as course assistants for Math 23, running review sessions on Zoom together.

Wirth and Benedetto attribute their lasting relationship to their similar interests and perspectives. “We’re always on the same page about everything,” Benedetto says. Whether it’s how much they’re willing to shell out on Taylor Swift tickets, or their opinion on the latest TV show they’re watching, they say they often find themselves coming to the same conclusion before talking to each other.

When they go on dates, they like to get Italian food or Pokeworks. And for Valentine’s Day, their tradition is to order in Thai food and “chill together.” They like to take a break from work to cuddle up and watch an episode of a TV show — “Friends,” “Brooklyn Nine-Nine,” and “New Girl” are favorites.

One of their most memorable dates was for their two-year anniversary last fall. Wirth took Benedetto to various places that were important in their relationship and gave her a small gift at each one — pens at Northwest to represent the proofs they wrote in Math 23, a rose where her ballet performance took place, and so on. “Every time I tell people this story, they freak out over it,” Benedetto says. “That was pretty cute,” Wirth says. “I’m proud of that one.”

Wirth and Benedetto also spend time together with their friend group, formed through their freshman year math and physics classes. Nowadays, the group likes to play Nintendo Switch Sports Volleyball, where Wirth and Benedetto say they make a great team.

They appreciate how their shared friend group gives them more time together. “It’s nice to be with your friends and also with the person that you care about the most,” Benedetto says.

Wirth and Benedetto acknowledge that to some degree they were lucky to find each other. But they also think that Harvard can be a good place to find a relationship. “Harvard brings a lot of people together that are all hard working, they’re driven, all really intelligent people that care about similar things and care about other people,” Benedetto says. “I think being in that Harvard environment definitely helped me find a cute little smart Harvard boy.”

“We’re very driven people,” Wirth says. “And so if that drive is to get cuffed, it’ll happen.”

However, Wirth and Benedetto say their busy Harvard schedules can keep them apart. They usually set fixed times to hang out — at least once during the week and once on weekends — and figure out when they have shared lunch times. “We see each other outside of those times for spontaneous hangouts when we don’t have work for some reason,” Benedetto says, “but we definitely have to set times to make sure we get to see each other.” Sometimes even fixed times fall through, though, when someone has a midterm or big assignment.

With graduation approaching, Wirth and Benedetto intend to stay close even as they work towards doctoral degrees in chemistry and astrophysics, respectively. They hope to end up at the same graduate school, or at least on the same coast. “It will depend on what schools we get into but we’re definitely optimistic,” Wirth says. 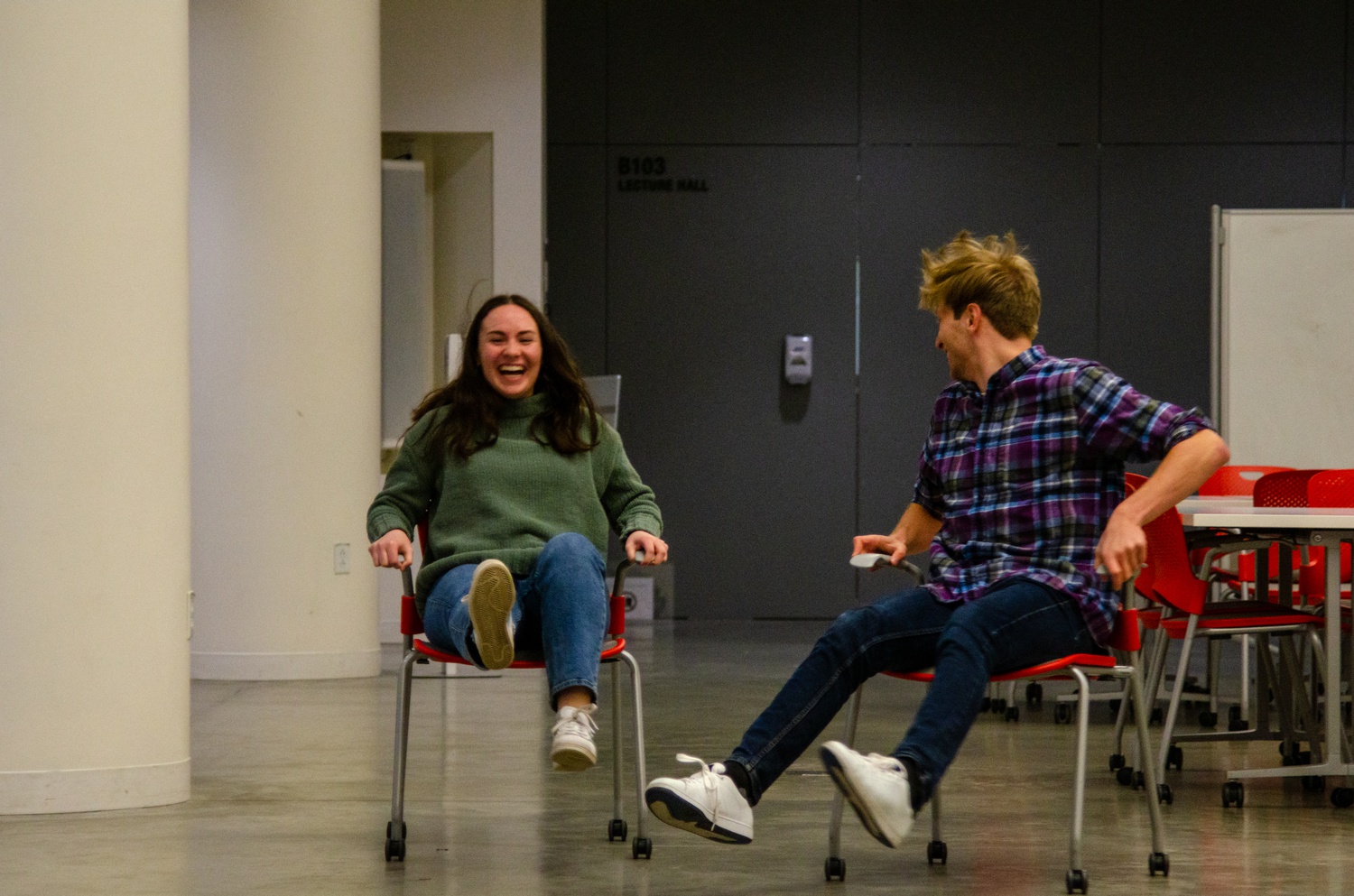 Their friends frequently talk about them getting married, even planning their roles as bridesmaids and groomsmen. Wirth and Benedetto aren’t planning on getting married any time soon, though, so the talk can be “a little bit nerve-racking,” Benedetto says.

“What if we disappoint our friends?” she says, laughing.

But ultimately, they are grateful to have each other’s support. Wirth says he loves “having someone you always feel like you can come back to and always talk to about anything and is there to support you and knows exactly what you’re going through.”

And they were happy to be chosen for the superlative: “We think we’re pretty iconic.”