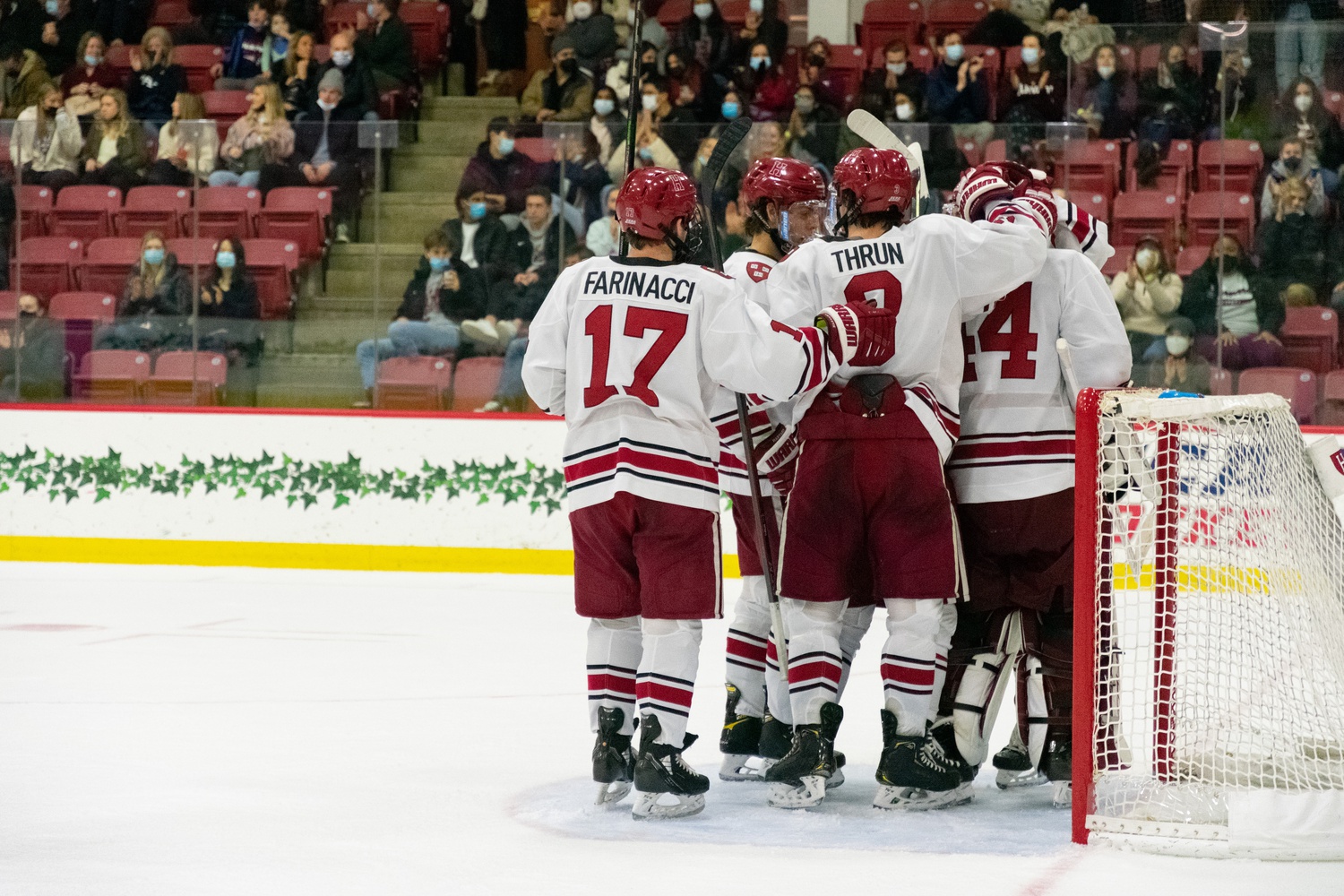 Junior forward John Farinacci, junior defenseman Henry Thrun and the Crimson huddle around the goal in a 2-0 victory over Yale on Feb. 11. On Monday, Harvard played to a 3-3 draw in the third-place match of the 69th Beanpot Tournament. By Julian J. Giordano
By Bridget T. Sands and Aaron B. Shuchman, Crimson Staff Writers

On a frigid Monday night in Boston, the Harvard Men’s Hockey team took on the Boston College Eagles in the consolation game of the 69th Annual Beanpot Collegiate Hockey Tournament. After three 20-minute periods and a five-minute additional overtime, the teams remained tied at three.

Sophomore goalkeeper Derek Mullahy started between the posts, a change from junior Mitchell Gibson, who had started the last eight games. Mullahy recorded 26 saves over the course of the contest.

“I thought it was a hard fought game,” head coach Ted Donato said. “Both teams really battled all the way to the end.”

The Crimson started the game flat and with a low intensity level. Within the first two minutes, junior forward Austin Wong was charged with a major penalty for contact to the head. Harvard was subsequently sent to the penalty kill for the next five minutes, and Wong was ejected from the game.

After Wong’s critical error, the Eagles dominated possession. They opened up the scoring at 8:24, as junior forward Liam Izyk found the net, assisted by graduate student forward Brendon Kruse.

BC played a very physical game, as many Harvard players, including first-year Alex Gaffney, found themselves up against the boards after being crushed by checks.

“I don’t think we played a particularly intelligent game. We chased the game a bit,” said Ted Donato, particularly lamenting the early penalty.

The Crimson had a power play opportunity after the Eagles’ Jack St. Ivany was called for tripping first-year defenseman Ian Moore. During the man-advantage, it was able to record a few more shots, but was unable to convert. Overall, the Eagles led in shots on goal in the period just eight to six, but they dominated shot attempts and possession by a much larger margin.

The second period began slowly, with the physicality of the game preventing any dangerous offensive chances. However, 12:24 into the second, Harvard was able to turn the tide shorthanded. With first-year defenseman Jack Bar in the box for slashing, first-year Zakary Karpa evened the score, tying the game off of a beautifully executed two-on-one breakaway with first-year forward Matthew Coronato.

However, despite allowing the shorthanded goal, BC was able to successfully execute in the remaining power play time, as sophomore forward Colby Ambrosio found twine to put the Eagles back in front 2-1.

The Eagles rode this momentum and added another goal, this time Izyk again, with 2:17 left in the period, sending the teams back to the locker room with BC in front by a score of 3-1.

The third period was the Crimson’s strongest. It came out quick, with Gaffney finding the net just over a minute into the period. Sophomore forward Alex Laferriere was credited with the assist, as Gaffney, driving hard to the net, redirected Lafferiere’s strong pass from the top of the circle past Eagles goaltender Eric Dop.

Mullahy, although strong throughout the game, had a particularly excellent third. His most crucial save came about eight and a half minutes into the period, a stop of an Ambrosio breakaway that would have given the Eagles a two-goal lead.

Harvard continued its energy, maintaining possession and taking time to properly set up its offense to set up good scoring chances. Eventually, its work bore fruit; with about five minutes remaining in the game, senior forward Jack Donato tied the game up when he corralled a loose puck in front of the net and slid it past Dop.

Jack Donato, who had spoken previously about the significance of the Beanpot to him and his graduating senior class, said, “We thought we didn’t play our best [at the Beanpot], so we just have to compartmentalize it…Every game from here on in is important.”

After Jack Donato’s goal, neither team would record another score, forcing a three-on-three, five-minute overtime period. Overtime brought very similar intensity from the Crimson, who again maintained control of the puck for the majority of the time.

Moore drew a penalty after his strong drive to the net inclined a BC defenseman to foul, giving Harvard an extra skater. However, the Crimson were unable to utilize its advantage, as the Eagles’ masked man Dop came up with some huge saves under pressure.

The team has a homestand doubleheader this weekend at Bright-Landry Hockey Center, taking on Princeton on Friday at 7 p.m. before a critical matchup Saturday against No.2 Quinnipiac, also at 7 p.m.

-Staff writer Bridget T. Sands can be reached at bridget.sands@thecrimson.com.

-Staff writer Aaron B. Shuchman can be reached at aaron.shuchman@thecrimson.com.