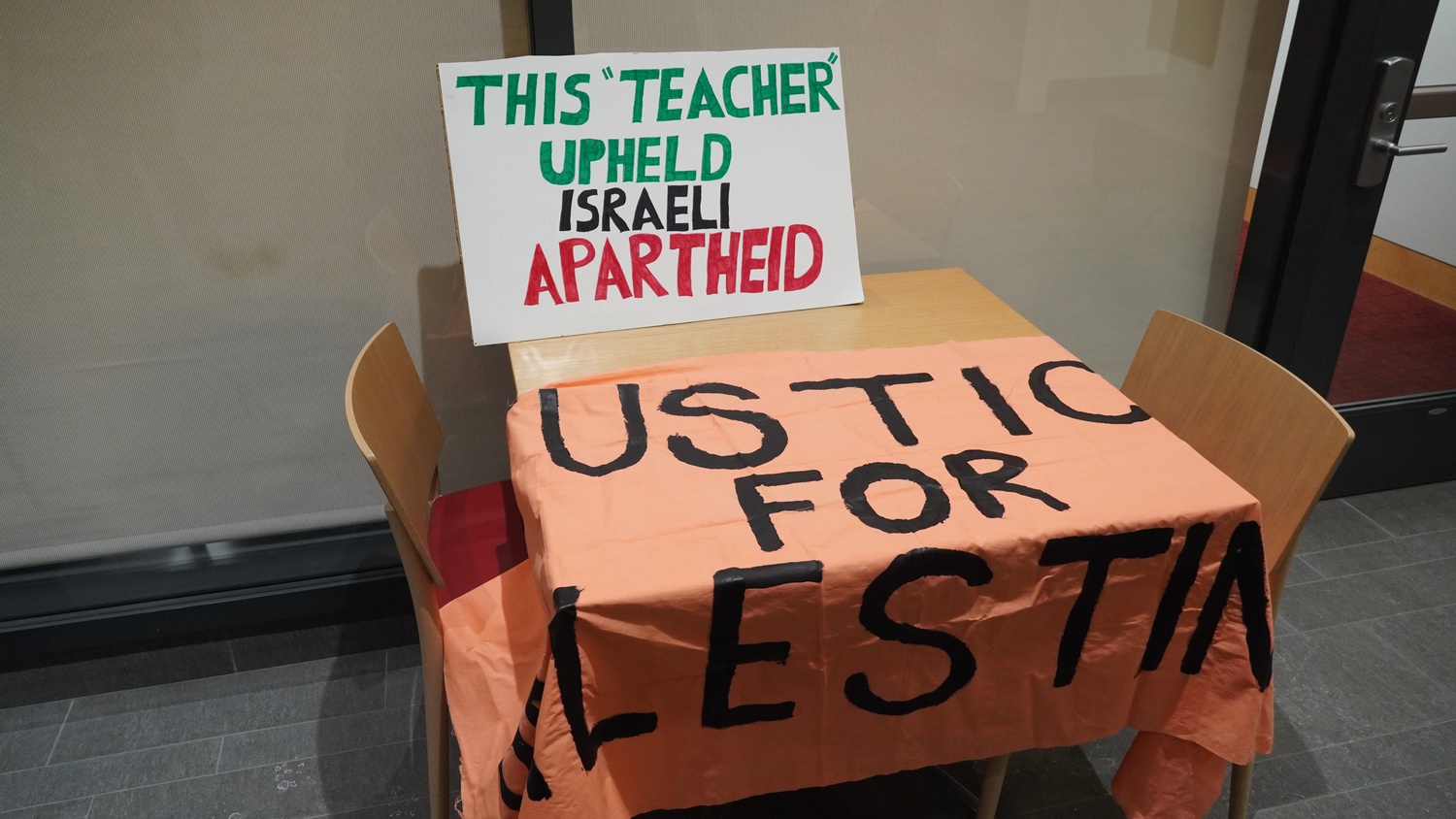 Members of the student group Harvard Out of Occupied Palestine held a protest Tuesday condemning Amos Yadlin, a retired Israeli Defense Forces general who is serving as a senior fellow at the Harvard Kennedy School’s Belfer Center this semester.

Six supporters of the student group rallied outside an HKS classroom where Yadlin led the first meeting of his semester-long study group about Israeli national security.

Christian B. Tabash ’22, a Palestinian student, called Yadlin a “war criminal” and denounced Harvard’s appointment of a top official in the Israeli military, which Tabash said is “responsible for decades of ethnic cleansing and dispossession of Palestinians.”

Shraddha Joshi ’24, a member of Harvard Out of Occupied Palestine, said Yadlin’s study group “speaks to the University’s lack of regard for Palestinian narratives.”

Protestors pressed signs criticizing Yaldin against the windows of the study group’s classroom and handed out flyers to students leaving the event. 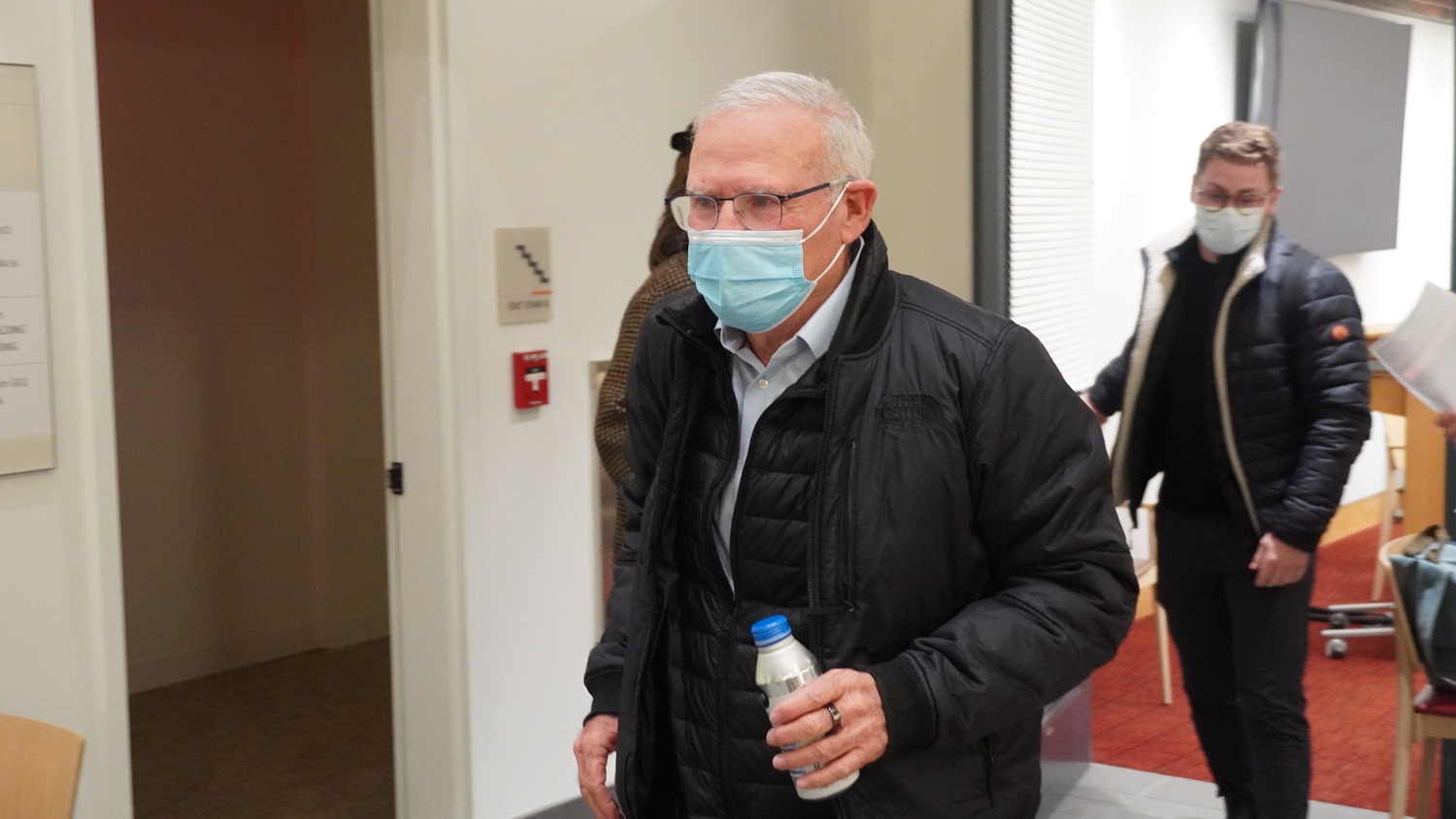 Amos Yadlin, a retired Israeli Defense Force general, pictured in February at the Harvard Kennedy School's Belfer Center, where he is serving as a fellow this semester. By Miles J. Herszenhorn

In an interview after the end of the study group, Yadlin said he stood by his career in the Israeli military.

“I’m very proud [of] my service to my country to defend Israel from those who want to destroy it,” he said. “All I have done in my service was according to the international law.”

Yadlin served in the IDF for 40 years, including 33 as a fighter pilot, eventually rising to become deputy commander of the Israeli Air Force. He was promoted to major general in 2002 and later worked as defense attaché to the United States.

“I came to the Kennedy School to share my experience with the students,” Yadlin said. “And I’m very happy to do it and willing to discuss every issue with everybody in my office.”

Joshi said she attended the rally to protest the students attending the study group, in addition to Yadlin himself.

“We want to give a message to the students that they should be really mindful of the kind of people that they’re platforming,” Joshi said. “It’s also a larger message to the University, to sort of think about how Harvard has been — and is complicit in — issues of colonialism and apartheid.”

Joseph G. Leone, an HKS student who attended the protests, called Yadlin’s appointment as a senior fellow “shocking and disgusting” and criticized HKS for giving a platform to someone “whose career is entirely premised on the violence and dispossession against Palestinians.”

Leone said the Yadlin invitation is “part of a pattern that the Kennedy School is engaged in.”

“They brought so many figures that have had a direct role in apartheid and settler colonialism and Palestine,” he said. “I don’t like to see my institution and my school and this place of learning to celebrate those atrocities through fellowships like this.”

Leone also called on participants in the study group to stop attending its meetings.

“I think they should withdraw from the class and should not be complicit in the celebration of this war criminal,” he said.

“We intend to maintain a sustained effort to spread awareness about HOOP and push back against Harvard’s choice to platform the fellow,” she wrote in a statement.