An honest look into the food — and bathroom — at Harvard Square’s newest, Wusong Road. 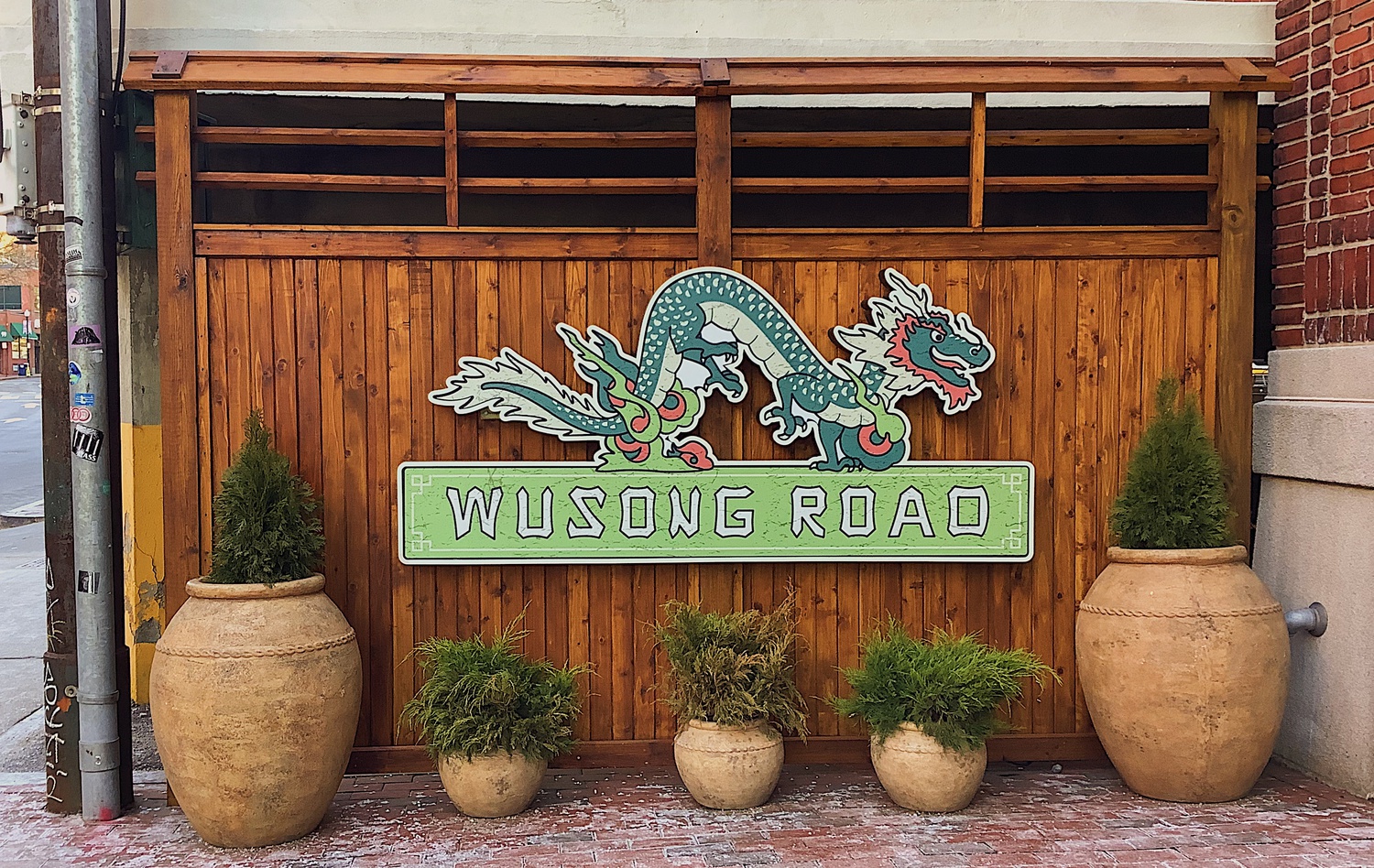 You can read the quality of food at a Chinese restaurant by the quality of its bathroom. Every stunning bathroom may indeed bring with it a dinner of mediocre takes on Chinese classics.

Escaping the simultaneously colorful yet dimly lit and overwhelmingly decorated seating area in Harvard Square’s newest restaurant and bar, Wusong Road, one may find refuge in the bathroom, taking time to admire the pristine, patterned tiles on the floor and the playful wallpaper of monkeys drinking vodka. Some sort of arbitrary house music plays above, and a large window tints the bathroom with the purple-blue of nightfall. But despite its spick-and-span bathroom, flashy decor, and beautiful cocktails, Wusong Road’s food failed to dazzle — it was a confusing disappointment. To the dismay of students across campus, the restaurant reaffirms the fear that good Chinese food in Harvard Square remains a faraway pipe dream.

For some Asian American students, their new college environment means leaving behind the endless stretches of strip malls where Mexican, Chinese, Vietnamese, Thai, or Korean restaurants serve as safe havens and meeting spots for immigrants and refugees who long for the tastes and smells and textures of home. After reading about the opening of Wusong Road last semester, one ought to have been intrigued by the chef owner, Jason Doo, a child of Chinese restaurant owners in Malden, MA. Some Cambridge and Boston foodies, however, remained skeptical after hearing announcements about a Tiki bar, let alone a Chinese restaurant and Tiki bar all-in-one.

At their 5:00 p.m. opening on a weekday, hosts at the new establishment welcomed in a crowd of punctual customers eager to decide for themselves what all the buzz was about. Within a few disorienting minutes, the atmosphere was filled with a shared sense of confusion among customers: was this Asian fusion? Chinese-Hawaiian? 1950s Tiki exotica? On the second floor, which houses the Tiki bar and sit-down restaurant, one is met with a mish-mash of embellishments displaying Chinese and Hawaiian iconography.

Up for tasting were the Spam and Egg Musubi, Madam Wu’s Salad, and the Dan Dan Ragu, each dish popular Hawaiian and American Chinese culinary classics. To my dismay, each dish lacked distinct, comforting flavors and proved rather unfulfilling. Spam Musubi, a popular snack in Hawa’ii with heavy influence from Japanese presence on the archipelago, is an easy home favorite. To one’s surprise, Wusong Road’s Spam and Egg Musubi did not resemble the staple snack, replacing the familiar notes of umami with a lack of flavor and odd textures that also characterized the Dan Dan Ragu.

More on the Dan Dan Ragu: dàndàn miàn (担担面) is a popular Sichuan noodle dish found in many forms, with different families, restaurants, and communities putting their own spin on the flour noodles drenched in creamy, spicy sauce. Often, the dish is garnished with peanuts, minced pork, and Sichuan chili oil. Wusong Road’s attempt at everyday American Chinese failed to satisfy, serving instead a dry and sauceless heap of noodles with chunks of pork at the bottom of the bowl. The magical sounds and aromas of creamy, spicy noodles from traditional and beloved Chinese cafes failed to appear in this Wusong Road version, reaffirming their marked divergence from traditional Chinese cuisine.

Perhaps most indicative of the experience is Madam Wu’s salad, which promised a zesty blend of crispy wontons, edamame, onions, carrots, scallions, and mandarin-orange vinaigrette, but arrived soggy and akin to an American side salad. A lot of flare, but not a lot of substance.

While Wusong Road’s attempt at American Chinese has potential for improvement with the addition of more traditional species and techniques, one may find themselves still wishing for tasty, affordable, accessible Chinese food (besides Dumpling House) at the end of the day. Wusong Road’s food and interior photographs beautifully, but Harvard Square’s newest establishment did not provide the fulfilling gastronomic experience one could have hoped for. After such an adventure gone awry, one can at least leave with good bathroom selfies.

Stay tuned next week for the second installment of my Wusong Road review, diving into the cultural politics behind the restaurant’s concept and hype.

—Staff writer Hannah Tsai Kim can be reached at hannah.kim@thecrimson.com.