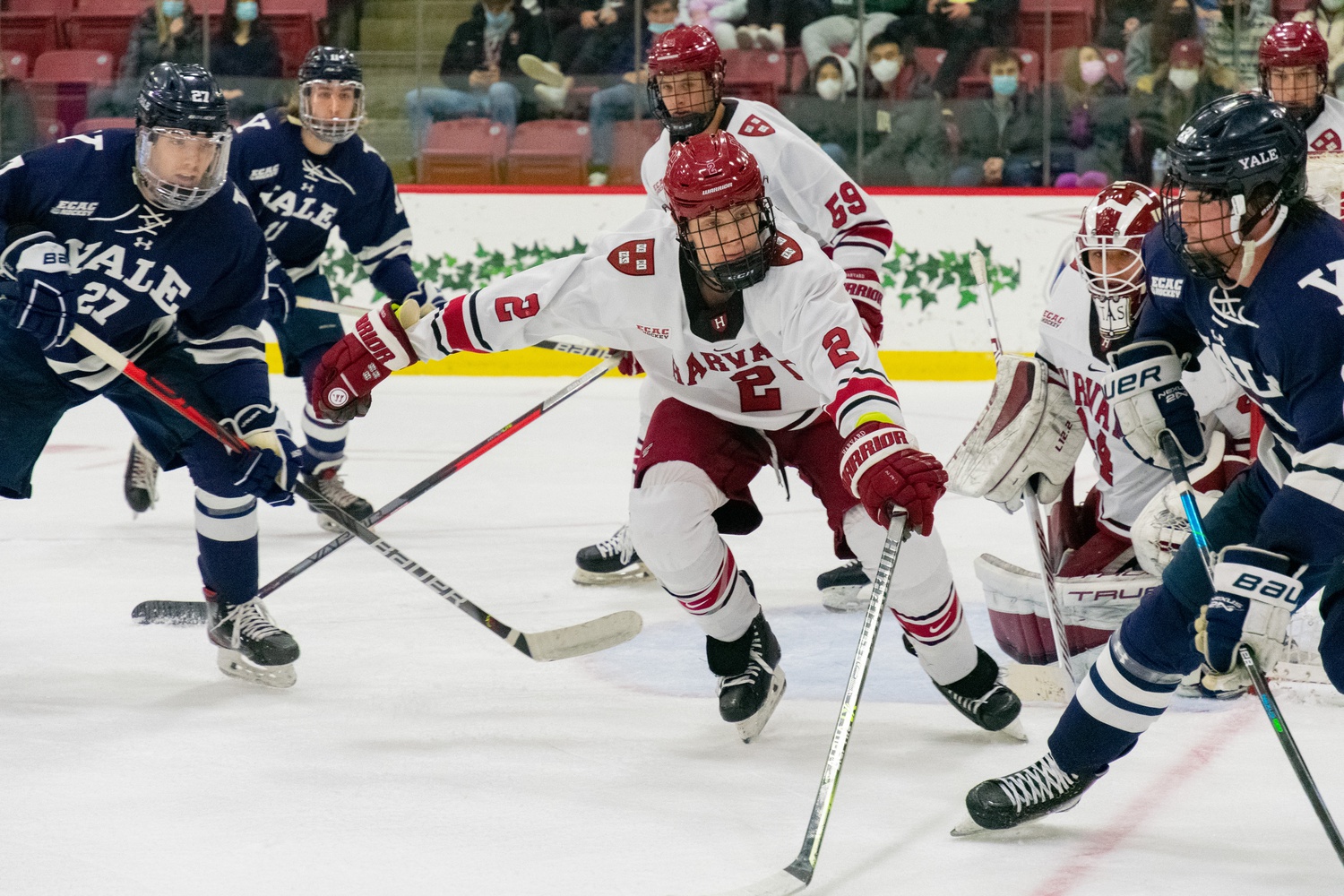 First-year defenseman Ian Moore chases after the puck in a 2-0 win over Yale on Feb. 11. On Sunday, Moore managed an assist in a 3-0 victory over Princeton in the regular season finale. By Julian J. Giordano
By Bridget T. Sands and Aaron B. Shuchman

In the last weekend before the ECAC playoffs begin, the Harvard Men’s Hockey team was on the road for a back-to-back-to-back set against conference opponents to close out the regular season. All three were games that were rescheduled, having been originally postponed due to Covid-19 in January.

The Crimson jumped around the northeast on the road trip, first taking on the Union College Dutchmen in Schenectady, N.Y. on Friday night, then heading to Troy, N.Y. to face the Rensselaer Polytechnic Institute (RPI) Engineers on Saturday night, before wrapping up the regular season in Princeton, N.J. against the Princeton Tigers on Sunday afternoon.

Harvard went 2-1 on the weekend, losing to Union 5-3, beating RPI 5-1, and defeating Princeton 3-0. The Crimson finished the regular season with a 17-9-3 record, good for third in the Eastern College Athletic Conference (ECAC).

“We wanted to try to manage the energy level as much as possible with the three games and the travel,” head coach Ted Donato said. “We know that as we get down to the end of the season here, if we’re able to have some success, we’re gonna need to have confidence in guys coming in and out of the lineup.”

The Crimson played the three games without sophomore forward Sean Farrell, who remains out with an upper-body injury. However, there is optimism that Farrell, who played for the United States national team during the 2022 Beijing Olympics, will be ready to return when the team opens the ECAC playoffs on March 11, according to Donato.

Before returning back to campus, Harvard concluded its season in Princeton, N.J. The Crimson scored a goal in each period, shutting out its Ivy League rival 3-0.

Throughout the game, possession was dominated by Harvard; however, it only outshot their opponents by three, 33 to 29. Senior forward Jack Donato opened up the scoring, assisted by junior forward Baker Shore and junior defenseman Henry Thrun, just over eight minutes into the contest.

Play stayed consistently aggressive, escalating in roughness in the second. Players from both sides allowed frustration to boil over – in the second period alone, seven different players were called for penalties. The Crimson was forced to the penalty kill four times while having two power play opportunities of its own.

The first two penalties came from hooking by first-year defenseman Jack Bar and a tripping call on junior defenseman Ryan Siedem, respectively. Harvard was able to diffuse the disadvantages, as Thrun, Jack Donato, and junior goaltender Mitchell Gibson came up with big plays on the penalty kill.

“Playoff hockey is just a different animal, and two major components of that are that you gotta be good on special teams and you’ve gotta have a hot goaltender,” Thrun said.

The Crimson failed to convert its first power play of the second, and just over ten seconds after the advantage was over, found itself down a man again, with first-year forward Alex Gaffney being sent to the box for hooking with 4:30 remaining. After again preventing the Tigers from finding the twine, the man-up advantage flipped in Harvard’s favor, and this time they were able to successfully execute. Sophomore forward Alex Laferriere scored with just over two minutes remaining in the second, assisted by junior forward and captain Nick Abruzzese and first-year defenseman Ian Moore.

The Crimson maintained its aggression into the third period, as it started off a man down with the continuation of first-year forward Matthew Coronato’s roughing penalty from the end of the second. Its defensive domination continued as well, as Harvard was able to prevent a goal. Desperate for an extra offensive skater, Princeton pulled its goalie early, with about 4:30 remaining. This allowed senior defenseman Marshall Rifai to drill an unassisted open-netter, solidifying the 3-0 win.

The three-goal lead inclined Ted Donato to pull starter Gibson from the game with 2:32 left, giving senior goaltender Derek Schaedig the chance to finish out his last regular season game between the posts. Schaedig recorded one save.

“The guys were really battling for him to make sure he closed the game off,” Jack Donato said of Schaedig. “It’s a good message for the younger guys that maybe aren’t playing as much that you could get those moments whenever your number is called.” 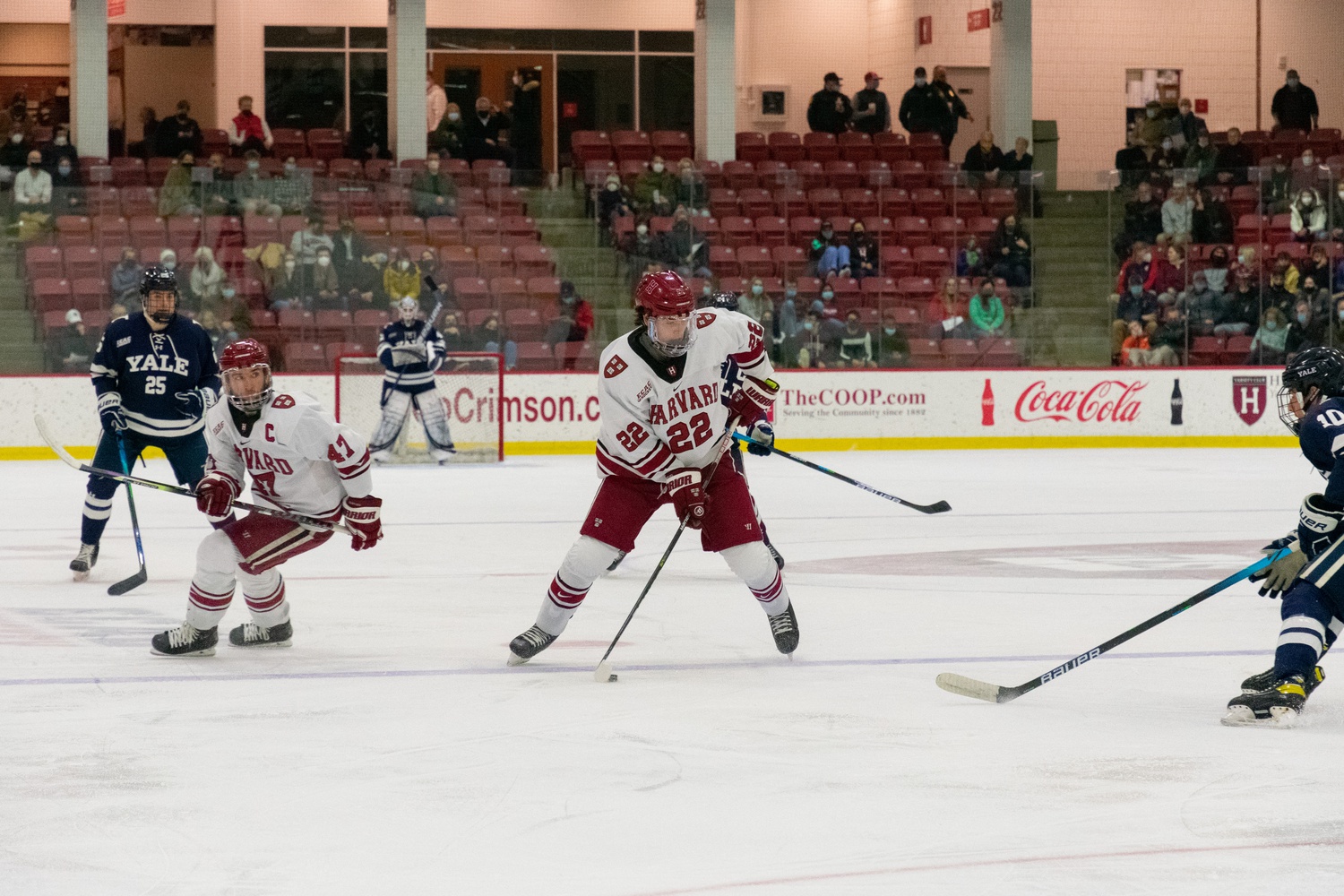 Junior defenseman Ryan Siedem controls the puck near the edge of the defensive zone. In the 5-3 loss to Union on Friday, Siedem managed a pair of assists. By Julian J. Giordano

After dropping a close 2-0 decision to the Engineers on January 25th at home, the Crimson earned its redemption, coming out flying after the puck drop to put the game to bed shortly after the first intermission.

Coronato opened the scoring eight minutes into the game on an odd-man rush. After breaking through the neutral zone to create a two-on-one, Coronato dragged the puck around the sliding RPI defenseman and fired a wrist shot past goaltender Linden Marshall to give Harvard the 1-0 lead.

Two minutes later, Laferriere and Thrun created another rush opportunity, and Laferriere’s slick pass found a streaking Thrun, who made a quick move and roofed the puck over Marshall’s shoulder to extend the Crimson lead to 2-0.

The momentum wouldn’t stop there, as four minutes later, on another rush chance, first-year forward Zakary Karpa strode down the left wing and ripped a wrist shot past Marshall, extending the Harvard lead to 3-0.

“We know with RPI, they sometimes fall into a one-three-one, which is a more passive neutral zone,” said Thrun, regarding the team’s rush offense. “We were aware of it and we kinda knew what was coming at us.”

Towards the end of the period, on a power play created by Siedem’s strong stickhandling, Laferriere made a perfect cross ice pass to Abruzzese, who hammered a one-time slap shot from the faceoff circle past Marshall, stretching the Crimson lead to 4-0. With the four-goal first period, Harvard recorded its best start to a game since a five-goal first period against Bentley on Oct. 30.

“Coach always talks about starting the game on time and not having to chase the game,” Thrun said. “You run into a lot of hot goalies late in the season here so it's important to get off to good starts.”

The Crimson carried its strong start into the second period, as only five minutes into the second frame, Thrun scored his second goal of the game, this time on the power play. Karpa’s hard shot from the slot rebounded out wide to the circle, where Thrun found the puck and hammered it past Linden, who could not slide across the crease in time. With the goal, Thrun recorded his first career multi-goal game and extended the Harvard lead to 5-0.

The Crimson remained stout on defense despite possessing a five-goal lead, as sophomore goaltender Derek Mullahy, playing for the first time in nearly two weeks, was solid in the net. Engineers’ forward Ture Linden was able to break up the shutout bid with a goal early in the third period, but Mullahy and a strong defensive effort were able to lock down from there, preserving a 5-1 victory.

“We were really able to spread the minutes out,” Ted Donato said. “We didn’t have anyone that was forced into playing huge minutes upfront.”

The Crimson hoped to start the weekend off strong against Union, having beaten the Dutchmen 4-1 earlier this season. However, after giving up a goal within the first ten minutes of the game, Harvard found itself playing a game of catch-up.

Gaffney evened the score later in the first, assisted by Siedem and Coronato. After giving up a power-play goal in the second period, as Bar was in the box for cross-checking, Coronato tied the score again within the first thirty seconds of the third. He was assisted by Abruzzesse and Karpa.

However, Union responded quickly, notching two goals within two minutes of each other, putting the Dutchmen up 4-2. By this point, there was about 13 minutes remaining; however, gameplay was far from over. Both teams remained aggressive offensively, putting shots on goal, and Harvard’s Shore tipped in a pass by Siedem, pulling the Crimson within one.

Harvard continued to create offensive opportunities late in the game, hoping to get to overtime. Ted Donato pulled Gibson with 1:15 remaining, for an extra offensive skater. However, Union intercepted the Crimson’s possession and scored on the empty net, solidifying its win.

Having wrapped up the regular season this weekend, Harvard will enjoy a bye week next weekend before hosting an ECAC quarterfinal best-of-three series starting March 11.

“The last month, we've established an identity that we know can win hockey games for us,” Jack Donato said. “Every game we play from here on out is playoff hockey.”