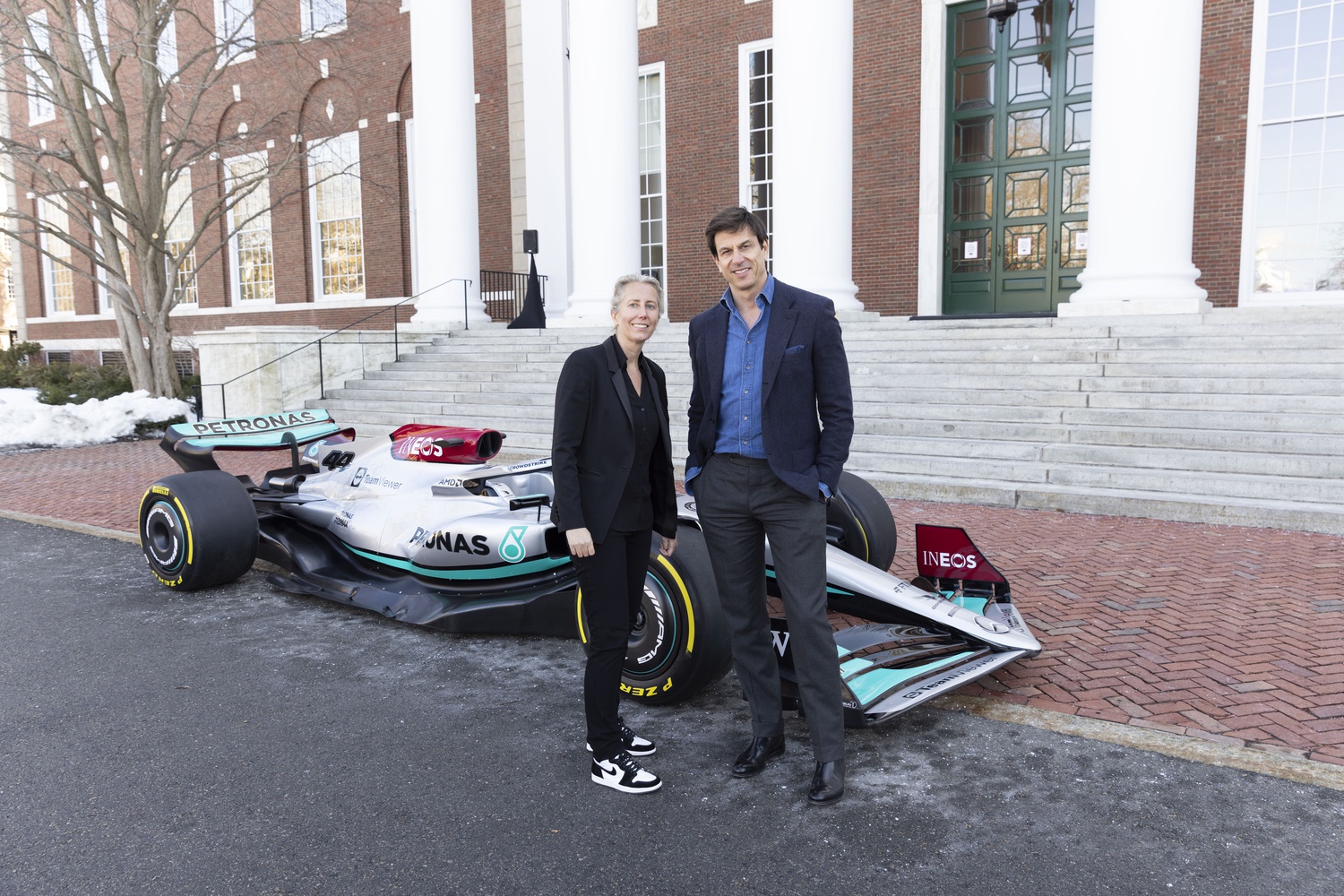 A figure almost as tall as the door, dressed in a navy blue trench coat, slowly emerges from the library. It’s the man of the hour — Torger “Toto” C. Wolff.
By Saba Mehrzad

On Wednesday, March 2, a crowd of Harvard students clusters around the newest Mercedes AMG Petronas Formula One race car. Flown in from Luxembourg that morning, the silver and green race car, expected to be one of the fastest F1 cars this season, is parked outside the Harvard Business School’s Baker Library.

The library doors swing open. Harvard Way, bustling with excitement, falls silent. A figure almost as tall as the door, dressed in a navy blue trench coat, slowly emerges from the library. It’s the man of the hour — Torger “Toto” C. Wolff.

After an introduction from Professor Anita Elberse of HBS, Wolff — the Mercedes AMG-Petronas F1 Team’s Team Principal and CEO — faces the crowd of energized students and jokes, “I thought Harvard was a smart university, not a group of fans.”

The Mercedes F1 Team is the most successful F1 team in the world with eight consecutive world championship wins, a feat that has not been achieved by any other team. Wolff leads a team of 1,400 employees, including drivers Lewis C. D. Hamilton and George W. Russell.

In February of this year, Elberse, who teaches “The Business of Entertainment, Media, and Sports” at HBS, published a case study on Wolff’s team in which she analyzes the “secret to his and his team’s success.” She went to races in the past F1 season and interviewed people within the Mercedes organization, including the drivers. 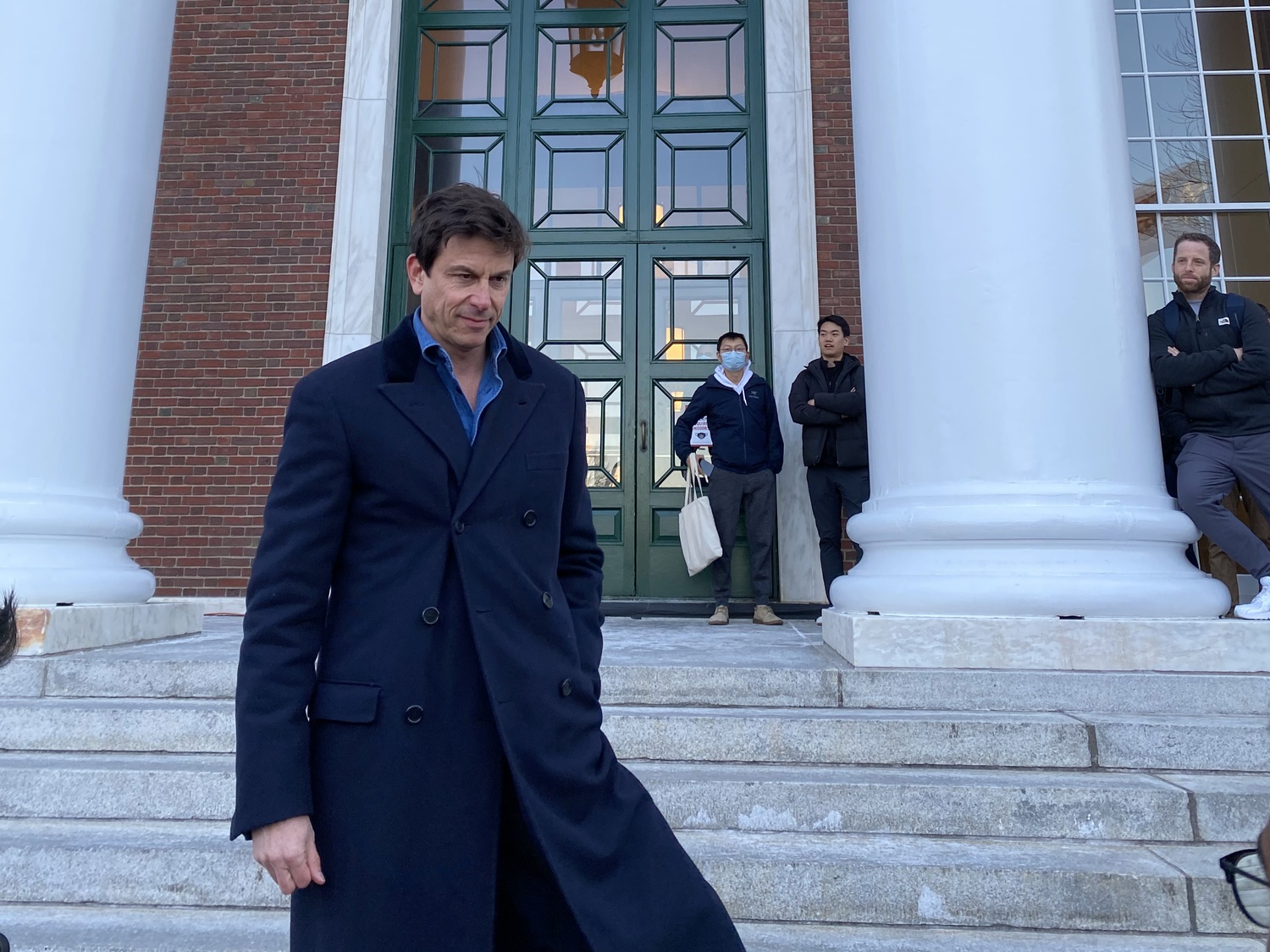 Torger "Toto" C. Wolff has led the Mercedes F1 Team to eight consecutive world championship wins, a feat that has not been achieved by any other team. By Saba Mehrzad

“It’s really difficult to find a team that has won what is effectively a world championship eight times in a row,” Elberse says. “Usually complacency sets in, or some other factor makes it impossible for the team to perform at the highest level. We tend to see very short life cycles for teams, but [Wolff] has kept his team at the top for eight years now. I find that really fascinating.”

Elberse invited Wolff to be a guest in her lectures and teach the case study with her. Afterwards, they led a meet and greet with the broader Harvard community, giving students the opportunity to view the Mercedes Team’s newest F1 car and ask Wolff questions.

During the Q&A period, Wolff answered questions on a variety of subjects, from racial and gender diversity in F1 to rivalries within the sport to his leadership skills.

However, he reveals that he was not always the confident leader he is now. “I remember distinctly a moment in my 30s when I was a guest at the Monte Carlo Grand Prix and I felt so shit because all these people were so successful and working in Formula One and I couldn’t imagine myself in that environment,” Wolff says. “I think we should speak about it. I think we should seek help.”

Wolff’s commitment to mental health awareness resonated with many students in the audience. Sean P.L. Finamore ’23, the Co-Founder and Vice President of the Harvard Undergraduate Automotive Society says, “I think that was particularly powerful for me, hearing him say that, and also being able to relate to a lot of those feelings.” 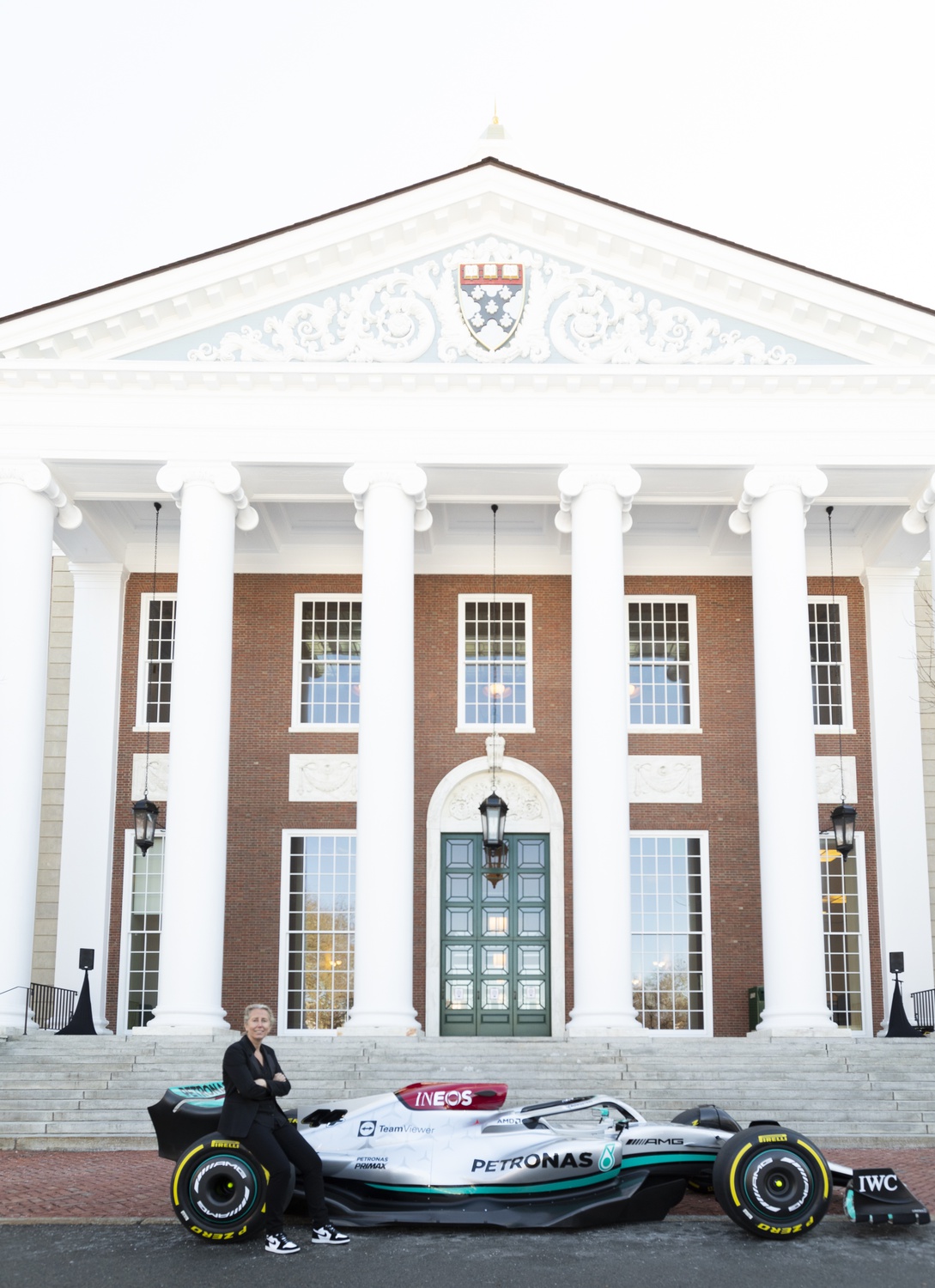 Professor Anita Elberse, who teaches "The Business of Entertainment, Media, and Sports" at HBS, poses with the newest Mercedes AMG Petronas Formula One race car in front of Baker Library. By Courtesy of Anita Elberse

Hiromu R. Rose ’22, Co-Founder and President of HUAS, was surprised at how many people came to the meet-and-greet. “I was very excited about [the turnout] because it shows that we do have a lot of interest and traction for future events,” Rose says.

After almost 20 minutes of jumping around with my hand raised, I was chosen to ask Wolff one of the last questions of the day. In a 2019 interview with BBC, Wolff said “relentless curiosity” drives him to keep winning — how, I asked, does he maintain his curiosity?

“I try to be curious like a child every day,” Wolf answered.“Every day the world opens up in front of us. We just need to have open eyes and be curious about it.”