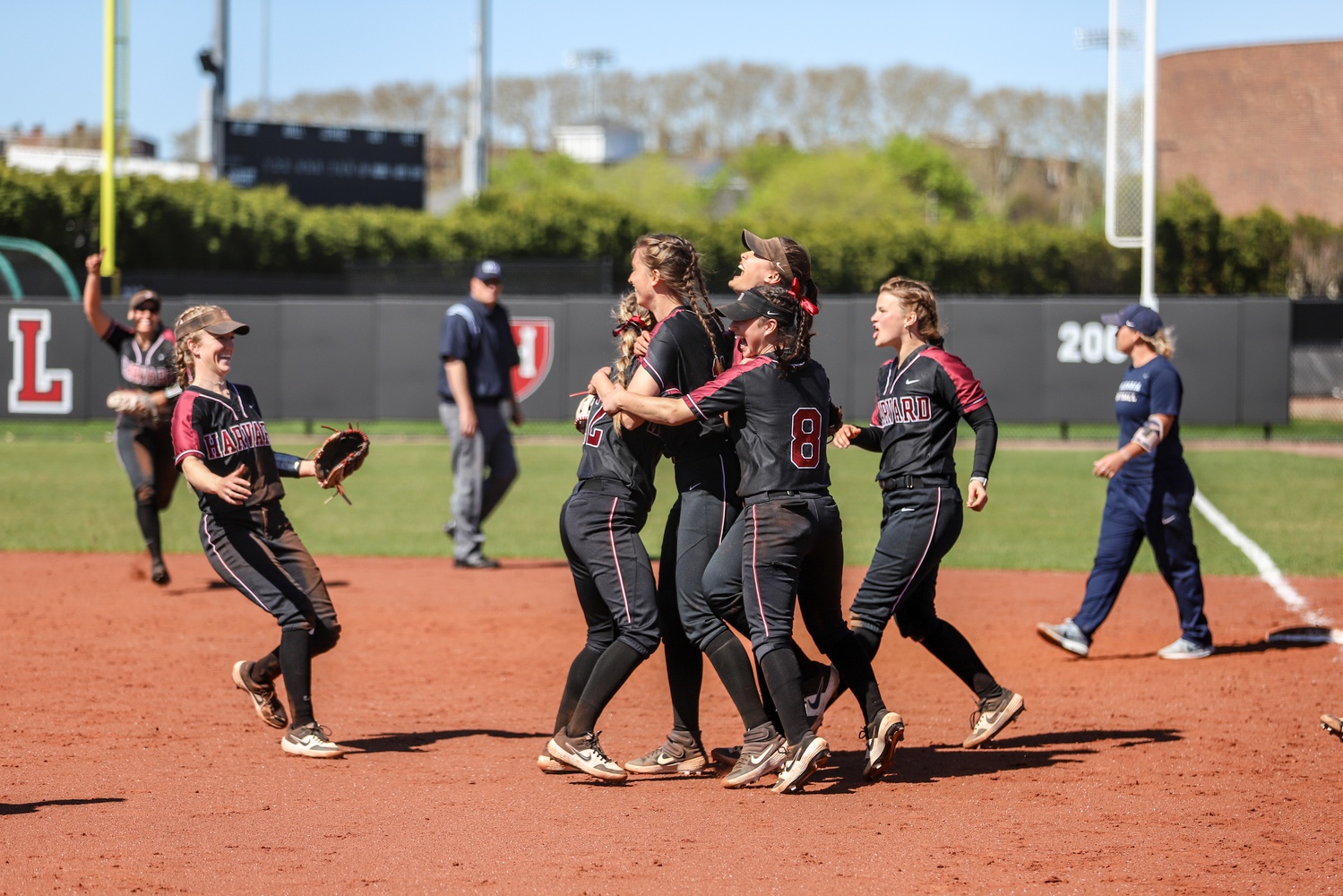 By Quinn G. Perini
By Lucy Connor and Elizabeth Pachus

Jetting off to California to start a non-stop onslaught of competition, Harvard (8-11, 2-1 Ivy) competed in the UCR/CBU Classic against the University of North Dakota (10-22), California Baptist University (18-16), and Saint Mary’s College (11-10).

Opening with a double header at John C. Funk Stadium on March 11th, the Crimson prevailed against the University of North Dakota with a 3-0 win, but later fell 4-3 to California Baptist University.

Harvard’s pitching squad was essential for the early win, with sophomore pitcher Anna Reed earning her and Harvard’s first shutout of the season in the 3-0 win over the Fighting Hawks. Her standout performance earned the team another accolade in the league, as she was recognized as the Ivy League Pitcher of the Week.

Coming off from a challenge set of games in Alabama the week prior, Reed returned with a vengeance to the mound, and credited Harvard’s strong defense to her success.

“Our defense is really amazing,” Reed commented. “They’re a lot of fun to have behind me and I know they’re going to get it done.”

Along with a strong defensive showing, Harvard’s offense was quick to attack against California Baptist, with junior centerfielder/utility Megan Welsh scoring her first home run of the season to open scoring for the Crimson.

“Once the opportunity strikes for some offense to step in, and somebody gets a clutch hit or some smart base running happens, then we're able to pull through and get some wins,'' Welsh commented. “Definitely was a big job for our pitchers, and they really stepped up their full ability.”

Harvard ended the UCR/CBU Classic in a pair of games against Saint Mary’s, winning the first game on a ground out 3-2. Harvard’s offensive attack was thwarted in the second game, however, and the Crimson fell to the Gaels 7-5.

The games didn’t end there, and softball faced some of their toughest competition yet against experienced Loyola Marymount University. Harvard suffered a twin pair of losses in five innings, 10-0, and 10-2, respectively.

“LMU is pretty tough, definitely going to be one of the best teams we face all season,” Reed admitted.

After an exhausting schedule in California, the team finally returned to the east coast for their first big tilt in the Ivy League, against longtime rival Yale (3-10, 1-2 Ivy) in New Haven, CT. Showing up ready to win, Harvard did just that, besting the Bulldogs twice in one day, with 3-1 and 1-0 wins in the afternoon on March 18th.

“The strong competition that we faced in California definitely prepared us for Ivy League play,” Welsh remarked. “It was good for us to elevate our game and head into Yale with that mindset of being greedy and really trying to play the same at a faster pace and control the game.”

The only run scored in the second matchup occurred after junior outfielder/infielder Trina Hoang stole second base. Hoang subsequently scored on a fly out by Welsh.

The final game of spring break posed a tough loss for the Crimson, despite a late game offensive push. Down four runs in the 5th inning, junior Teagan Shaw’s home run changed the pace of the game for Harvard. RBIs from sophomore pitcher/infielder Madi Mays and junior catcher Allison Heffley continued Harvard’s offensive push. But even with a valiant comeback effort, Harvard couldn’t pull off a clean sweep of Yale, ending in a final score of 4-3.

This marked Shaw’s third home run of the season, causing her to inch past senior infielder Morgan Melito and Heffley to lead the team standings. May notched her first RBI of the season, and Melito’s RBI kept her leading the team with eleven to date.

The team is acutely aware of its play in the Ivy Conference, as it remains in the hunt to regain its championship status from the 2019 and 2020 seasons.

“In the Ivy League games, every game matters, whether it's a win or a loss, that's how it happens,” said Welsh, who was a first-year on the 2019 Ivy Championship team.

After being on the road for a majority of the season, the Crimson is eager to return to home field advantage this weekend. It hosts the Princeton Tigers (8-9, 3-0 Ivy) back at Soldiers Field at 12:30pm on Saturday, March 26th. This will mark its first home game since 2019, and the stands should be filled with Harvard fans and parents alike, as it coincides with the College’s junior parents’ weekend.

“We’re excited to continue what we played on Friday and move forward into next weekend,“ Reed said. “Just keep it going.”

—Staff writer Lucy Connor can be reached at lucy.connor@thecrimson.com.