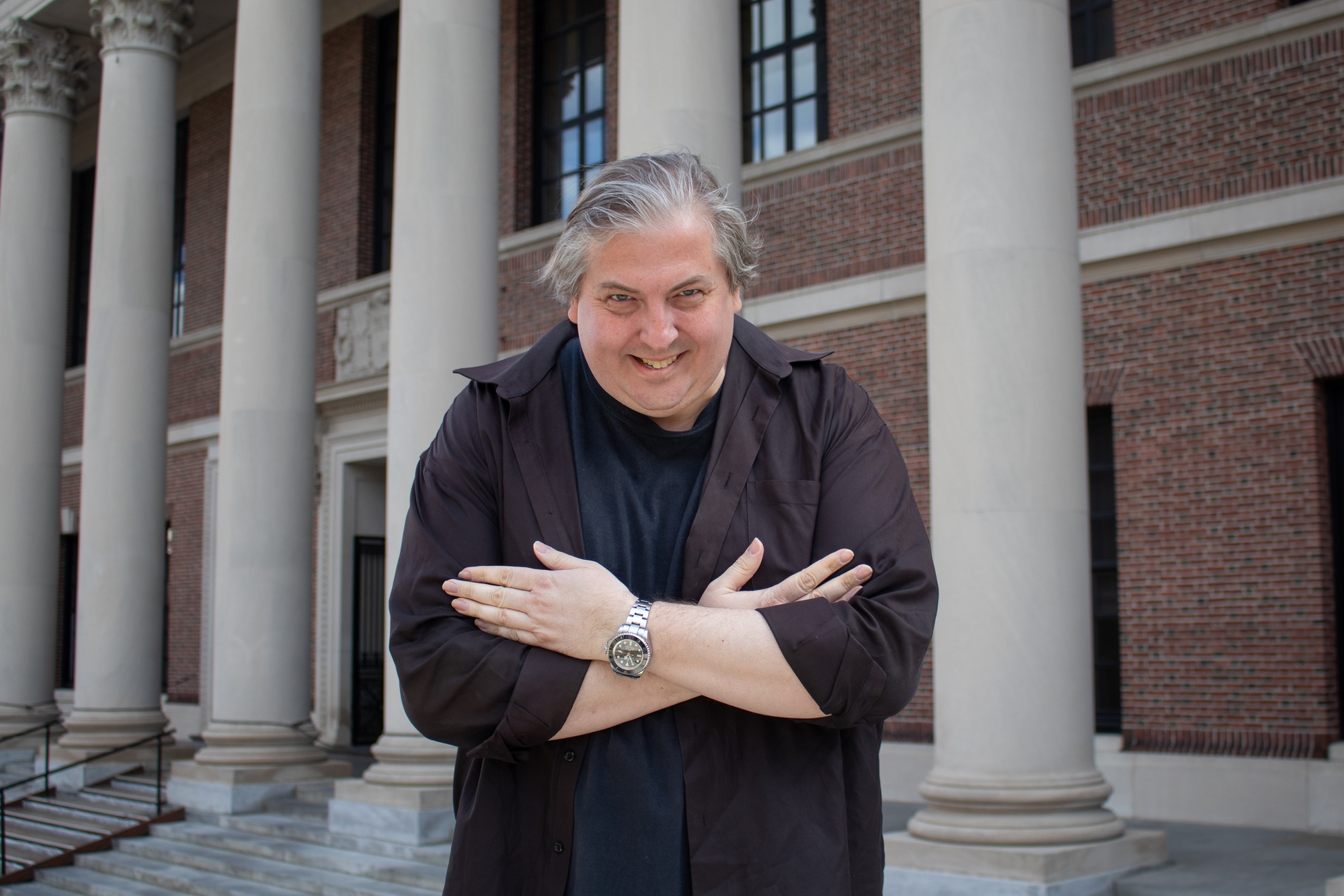 Benjamin B. Bolger holds 16 post-graduate degrees from some of academia's most prestigious institutions from Harvard to Oxford.
Advertisement
Advertisement

Benjamin Bolger Has No Post-Graduation Plans

“Other people might read a magazine article in The Economist,” Bolger says. “Maybe I'll do a master’s degree instead on the topic.”
By June K. Fergus and Graham R. Weber

Benjamin B. Bolger never bothered to collect his diploma from Dartmouth College. He could easily retrieve his degree — a Master of Arts in Liberal Studies — from the administrative office, but he is satisfied with the symbolic green tube that he received during his 2004 commencement ceremony. At some point, Bolger explains, he’ll probably pick up his certificate when he returns for a Dartmouth football game. “I have the education. That’s what I’m most concerned about,” he says.

Bolger’s Dartmouth degree was just another addition to his veritable arsenal of academic qualifications. He has graduated from some of the world’s most prestigious institutions, including Harvard, Brown, Columbia, Stanford, Dartmouth, Cambridge, Stanford, and Oxford. He now lives in Cambridge, Mass., where he is the head teaching fellow for a course in Harvard College’s General Education Program. He is also working virtually towards his 17th degree — in writing for performance from the University of Cambridge.

“Other people might read a magazine article in The Economist,” Bolger says. “Maybe I'll do a master’s degree instead on the topic.”

Academic achievement did not always come easily for the perpetual student. Bolger says he was expelled from his preschool, called Noah’s Ark, because of his curiosity about the school’s namesake story. Unsatisfied with the teacher’s responses, Bolger kept asking follow-up questions. “The lions are gonna get hungry. I mean, how does this work?” he recalls asking.

Diagnosed with severe dyslexia as a child, Bolger struggled to find his footing in various elementary schools and finally dropped out in the third grade. Bolger’s mother, a teacher, decided to homeschool him. They would drive in their 1978 Ford pickup truck on field trips to Gettysburg or the Air and Space Museum. At age 12, Bolger enrolled in courses at Muskegon Community College near his home in Grand Haven, Mich.

Bolger’s childhood was also marked by personal tragedy. At age two-and-a-half, Bolger and his family suffered a devastating car crash that left both his mother and father in intensive care. Though his parents survived, defying doctors’ predictions, he witnessed their harrowing recoveries throughout his childhood. “I hope a lot of children have carefree childhoods,” Bolger says. “But, I really, at a young age, realized that I could have been orphaned. And so that really made me understand truly how fragile life is.”

Ever since the accident, Bolger has forced himself to sleep just four or five hours a night. “If I die at an early age,” Bolger says, “I will have at least experienced more life because I’ve been awake more, both literally and figuratively.”

While awake, he exerts a superhuman level of attention that showcases his extensive knowledge on wide-ranging topics. In just an hour-and-a-half interview, Bolger discussed telemedicine in rural communities, the prison system, gravity, Paulo Freire’s “Pedagogy of the Oppressed,” and brutalist architecture. Asked to select his favorite national park, Bolger mentions that he loves the Grand Canyon. But rather than admiring its beauty, Bolger emphasizes how water cutting through rocks “speaks to plate tectonics” and is a “metaphorically powerful statement,” especially given that “a big part of our bodies are water.”

Bolger constantly looks for opportunities to learn from his surroundings — be it the Grand Canyon and his professors or the laundry list of celebrities he has encountered. At Harvard alone, Bolger recalls overhearing the Winklevoss twins complain about Mark Zuckerberg and having many “unbelievably great conversations” with Amanda Gorman ’20. “I try to be humble,” Bolger tells us, before sharing a digital copy of his award from Harvard University’s Derek Bok Center for Teaching and Learning — his 13th distinction from the Center, he notes.

Bolger funds his unique lifestyle with revenue from Bolger Strategic, an admissions consulting firm that he describes as “highly successful” in an email. Bolger is quick to add that, because of his financial success, he holds an Amex Personal Black Card and an Amex Business Black Card, making him “one of a very select group of people in the world” with this honor.

Today, Bolger shares his passion for learning with his two children, seven-year-old Benjamina Brook Bolger and two-year-old Benjamin Blitz Bolger. (“We love ‘B’s,” he says.) Their education began long before their homeschooling, as Bolger read books to them from outside the womb. “From day one, we’ve been focused on a comprehensive education,” Bolger says.

Benjamina and Benjamin Jr.’s educations also include access to many notable figures, such as writer and activist Gloria Steinem, whom Bolger introduced to Benjamina so that she would learn not to “accept the status quo.” Bolger’s dedication to his children’s education has seemingly paid off. At age six, Benjamina published her first book, “Guri: The Very Friendly Owl.”

For Bolger, education is not a means to an end but the end itself. Bolger has a slew of qualifications, but if there’s one thing he can teach us, it is about the endless pursuit of curiosity. “Embrace being eccentric,” he says.