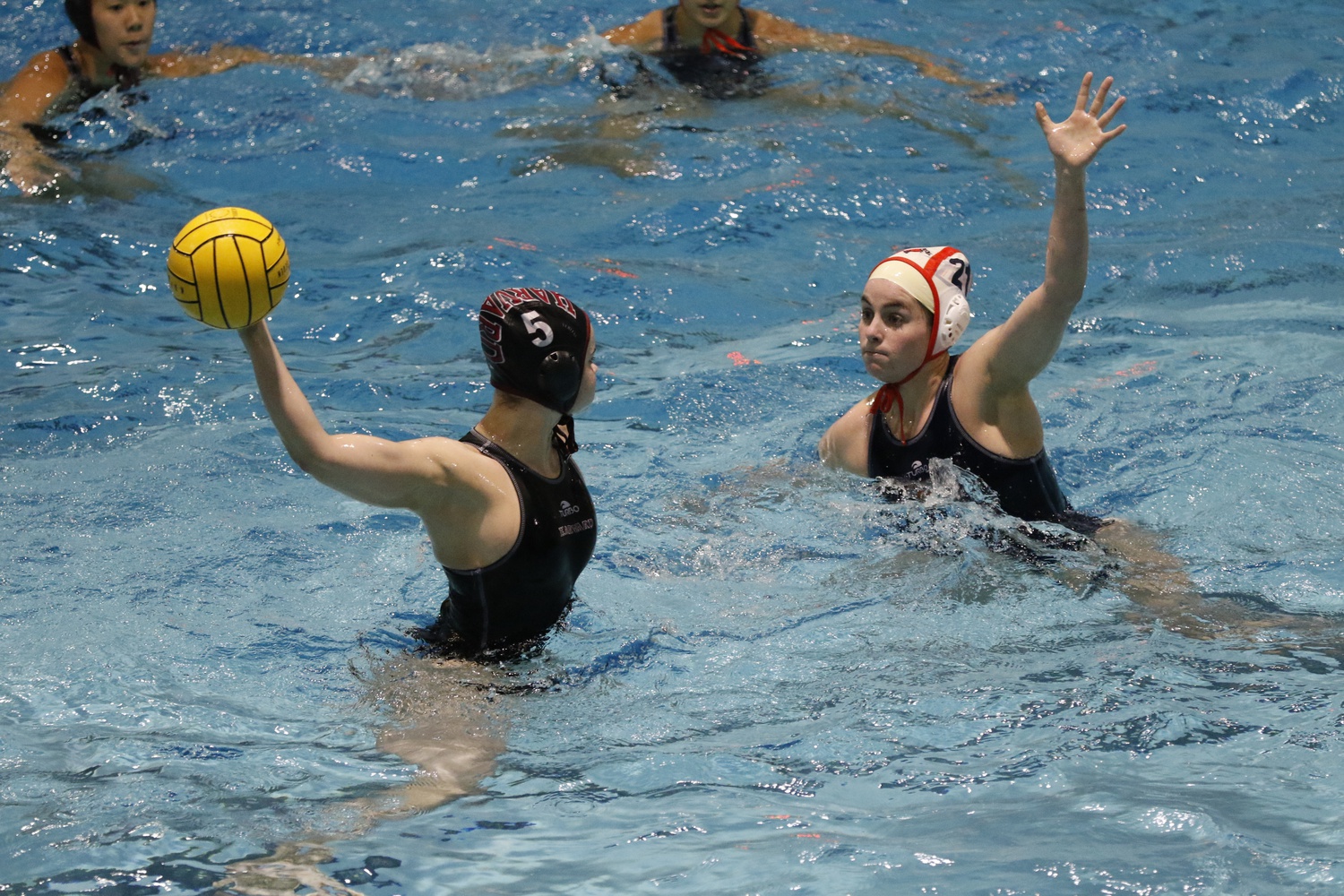 Then-first year attacker Borden Wahl readies to shoot in a March 3, 2019, battle against Bucknell, which the Crimson won, 8-6. This weekend, Wahl and Harvard won a trio of games to open conference play. By Timothy R. O'Meara
By Ever A. Marinelli

No. 19 women’s water polo clinched its second-ever shutout in varsity history this weekend in Pennsylvania, coupled with an impressive overtime victory and a challenging shallow-deep win that tallied another three victories for the Crimson.

“I’m so proud of this team for sticking to what we had talked about all week and sticking to the game plan and just really being there for each other,” head coach Ted Minnis said, “[The weekend] was a great team effort with great team wins.”

Harvard (12-1, 3-0 CWPA) began its weekend of conference games with an 11-4 win over Saint Francis University (5-9, 0-2 CWPA). The game was played in a shallow-deep pool, which demands a serious adjustment in playing style. Since the Crimson does not train in a shallow-deep pool, the win against St. Francis was doubly impressive.

“It’s like playing a half-court basketball game,” Coach Minnis said, “I was very happy, I can’t remember a time where we only gave up four goals in such a small pool size … that first game set the tone for the weekend.”

The success continued with an exceptional game against Mount St. Mary’s (4-11, 0-2 CWPA) later that day, ending in a score of 18-0. The incredible shutout with nine saves by junior goalie Zoe Banks was the second in varsity history for Harvard women’s water polo – the first was also by Banks in 2019.

“Although externally I get the credit for the shutout, it is a huge team effort,” Banks said, “Obviously, I’m the last line of defense so the fact that my defense was able to make sure I was set up for success really allowed us to shut them out.”

Coach Minnis also commented on the Crimson’s defensive strength this weekend, noting that they were able to support Banks by shutting down the opponents’ power play and strong center. The offensive resilience paired with diligent and consistent defense allowed for a high-scoring shutout that brought positive energy and confidence to the second day of competition.

The weekend concluded with a 8-7 win in overtime over No. 25 Bucknell University (6-5, 2-4 CWPA). The Bucknell triumph was the squad’s 10th consecutive win of the season.

“I think we really held our composure throughout the whole [Bucknell] game,” Coach Minnis said, “We really didn’t worry about things we couldn’t control and we stuck together and we got the job done.”

Despite some offensive difficulties during the Bucknell game, the team was able to come out on top, noting that they pride themselves on being able to recognize setbacks and adjust moving forward. Senior center defender Indie Halligan and junior attacker Borden Wahl were able to net two goals each, and junior center defender Jaiden Miller scored the winning goal in the first possession of the first overtime period, allowing the Crimson’s strong defense to close out the last six minutes.

“On offense today we were putting up a lot of shots, but they were going over the cage and the goalie was blocking them,” Banks said, “We didn’t stop shooting and the ferocity we came out with was really important against a good team today.”

Harvard will face Mount St. Mary’s again at the upcoming Harvard Invitational and will meet both Bucknell and St. Francis later in the season during the heat of conference play. The Harvard Invitation this weekend will see the Crimson face off against four teams – including ranked No. 17 Indiana and No. 24 Brown – where it hopes to continue its winning streak and undefeated conference record.

—Staff writer Ever A. Marinelli can be reached at ever.marinelli@thecrimson.com.