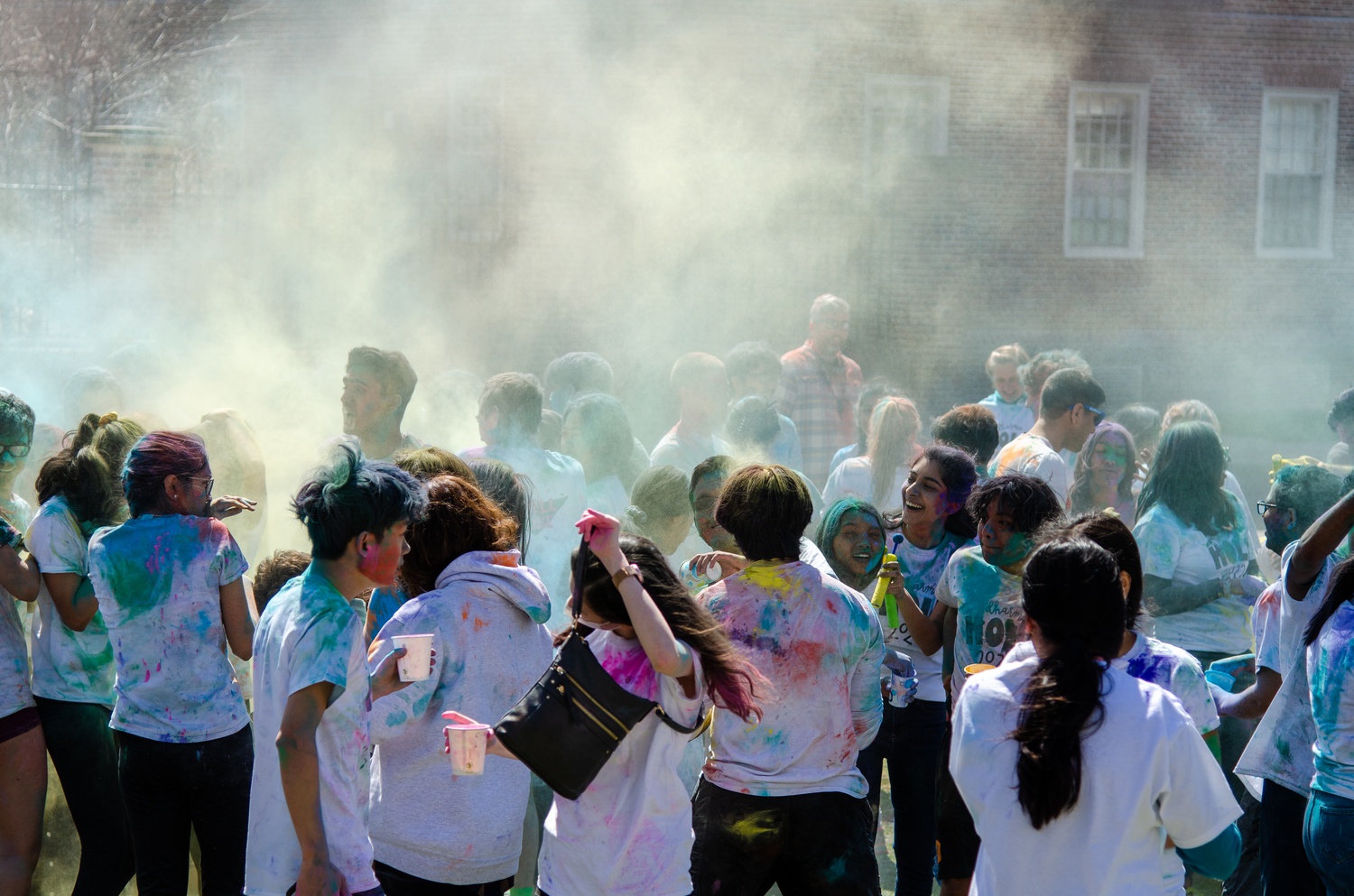 While Holi is associated around the world with joyous celebration and beginnings, there is a lesser-known history surrounding its origins. This history has informed protests and calls for more socially conscious discussions to accompany the holiday’s festivities.
By Addea Gupta and Huong T. Le

Holi, also known as the Festival of Colors, is a Hindu celebration of the end of winter and the onset of spring. It is meant to invoke a good harvest and is predominantly celebrated in the Indian subcontinent. Over the years, however, it has found its way into the Western world and beyond through the South Asian diaspora. Now, individuals from all over the world participate in the joyous celebration involving “rang,” or colorful powder, as well as music and delicious sweets.

While Holi is associated around the world with joyous celebration and beginnings, there is a lesser-known history surrounding its origins. This history has informed protests and calls for more socially conscious discussions to accompany the holiday’s festivities.

The tradition is thought to derive from the myth of Holika, a Bahujan, or low caste, woman who was burned when assisting her brother Hiranyakashipu, a demon king, in plotting his son's murder. Hiranyakashipu was enraged over his son’s devotion to Lord Vishnu, one of the principal deities of Hinduism who had killed his younger brother.

The celebration of the transition from winter to spring is premised on this myth about burning a Bahujan woman to symbolize the triumph of good over evil. Some argue that this myth has contributed to the burning and sexual abuse of Bahujan women during Holi in modern-day India. Thus, many question the ethics of celebrating Holi, especially when the celebrations are not accompanied by an acknowledgement of the holiday’s history.

Issues of casteism extend beyond these violent burnings during Holi. They appear in everyday disparities in education, employment, and other resources, as well as social stigma against lower-caste individuals across the South Asian subcontinent. According to the U.S. State Department, these cases of caste-based violence, as well as violence against religious minorities, have been increasing under the administration of Indian Prime Minister Narenda Modi. Modi’s administration is commonly associated with promoting Hindutva, a form of Hindu nationalism that is associated with attitudes that contribute to casteism and the resulting violence.

In 2020, members of the South Asian diaspora joined in nationwide protests aimed to oppose various policies and forms of violence associated with Hindutva. One such group, the Students Against Hindutva Ideology, an “inter-university, interfaith, progressive student coalition,” gained significant traction. During the month of Holi celebrations, students led protests on over twenty college campuses, including Harvard, both in the United States and England, to protest India’s Citizenship Amendment Act, which restricts Indian citizenship for religious minorities in the subcontinent.

“We understand the deep socio-cultural issues associated with caste and their representation in the festival of Holi,” says Navin S. Durbhakula ’25, who helped put together this year’s Holi event at Harvard. Keeping these issues in mind, Abhi S. Patel ’25 led a talk on caste inequalities in India earlier this month for the attendees of a weekly event hosted by Dharma, Harvard’s Hindu Students’ Association.

“Our goal was to present as unbiased a perspective on Holi and caste as possible using reputable sources to back our presentation. At the same time, we also wanted to emphasize that Dharma condemns all forms of caste discrimination, whether it take[s] place in Holi or otherwise,” Patel writes in an emailed statement. 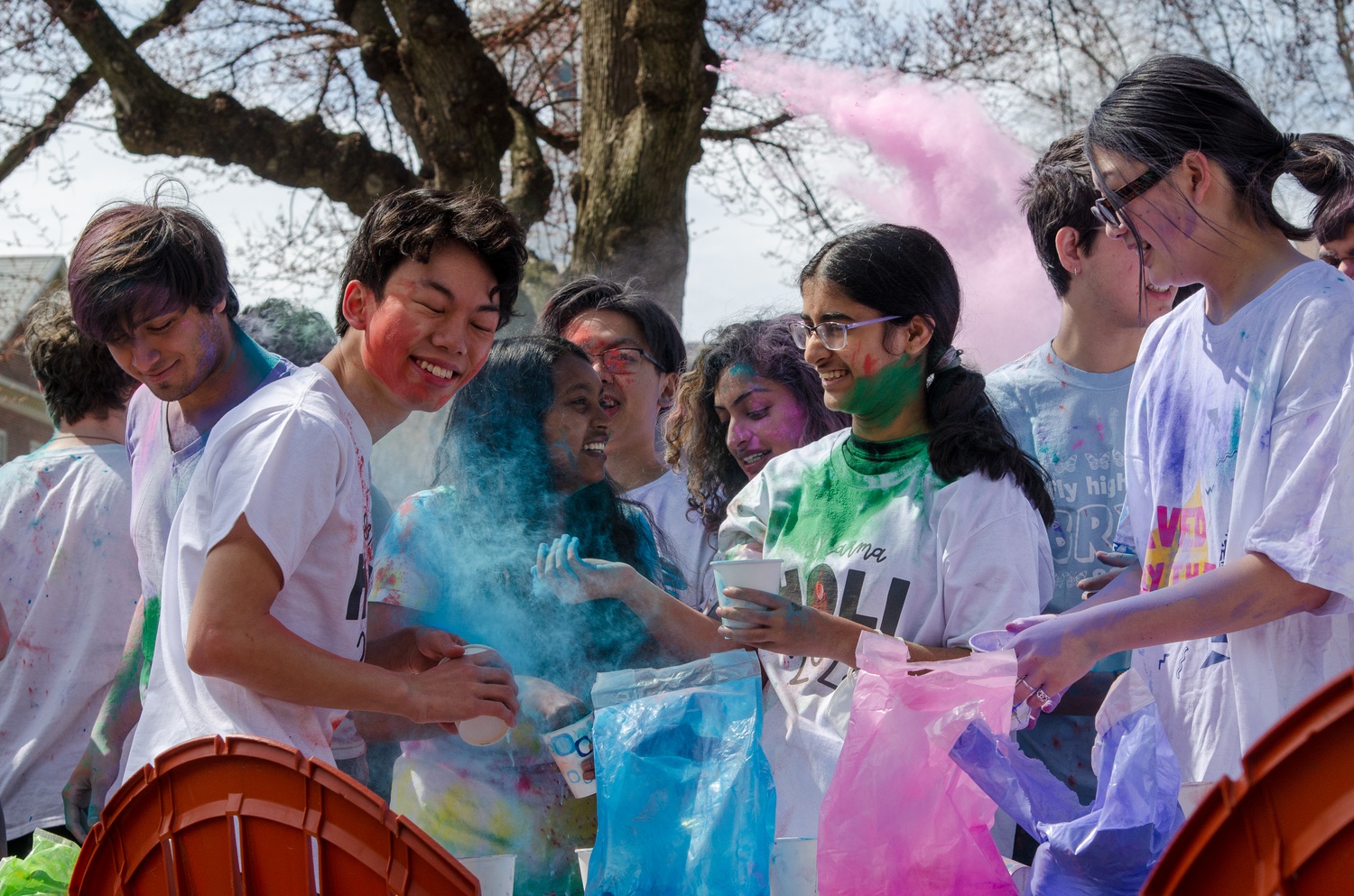 At Holi, students throw "rang," or colorful powders, to celebrate the arrival of spring. By Joey Huang
Advertisement

While they were cognizant of the issues surrounding the interpretations of Holi in the modern world and set aside time for these discussions, their goal was also to revive a celebratory spring tradition after two years of being off-campus in April, when Dharma typically hosts Holi. Organizers Durbhakula, Karina J. Mahida ’25, and Suhanee S. Mitragotri ’25 had been hard at work for the past three weeks to gather all the supplies for the event, design custom t-shirts for attendees, order snacks, curate a playlist, and plan additional events.

“One of our traditions is that every night before Holi celebrations, Dharma’s nearly 40-person board — known as DBoard — gets together to play a game of Jeopardy,” Kavya M. Shah ’23 says.

“The morning of, DBoard throws rang on the John Harvard Statue and goes for a picnic where the food is sourced from Flour Bakery,” Dhwani Bharvad ’22 says. “We then go over to the Malkin Athletic Center Lawn to set up the tables full of colors, snacks and water guns. Before celebrating with colors, we play a game of Kabaddi, a traditional South Asian sport.”

On April 3, a crowd of at least 100 students gathered in a circle at the MAC Lawn and at exactly 1:30 p.m. kicked off Holi by throwing rang at each other. Within the next hour, the numerous plastic bags full of colors were emptied, people were drenched by buckets of water, and all the samosas ordered had been relished by hungry participants.

“We will not be ashamed to celebrate Holi the proper way it was originally meant to be celebrated,” Patel writes. “However, as Hindus, we will do our best to understand that this does not always happen and that many Bahujans and women are harassed and discriminated against by some groups’ Holi celebrations.”

“It is our duty to call out [discrimination] and ensure that our space is welcoming and lives up to promoting the original message,” Patel adds.