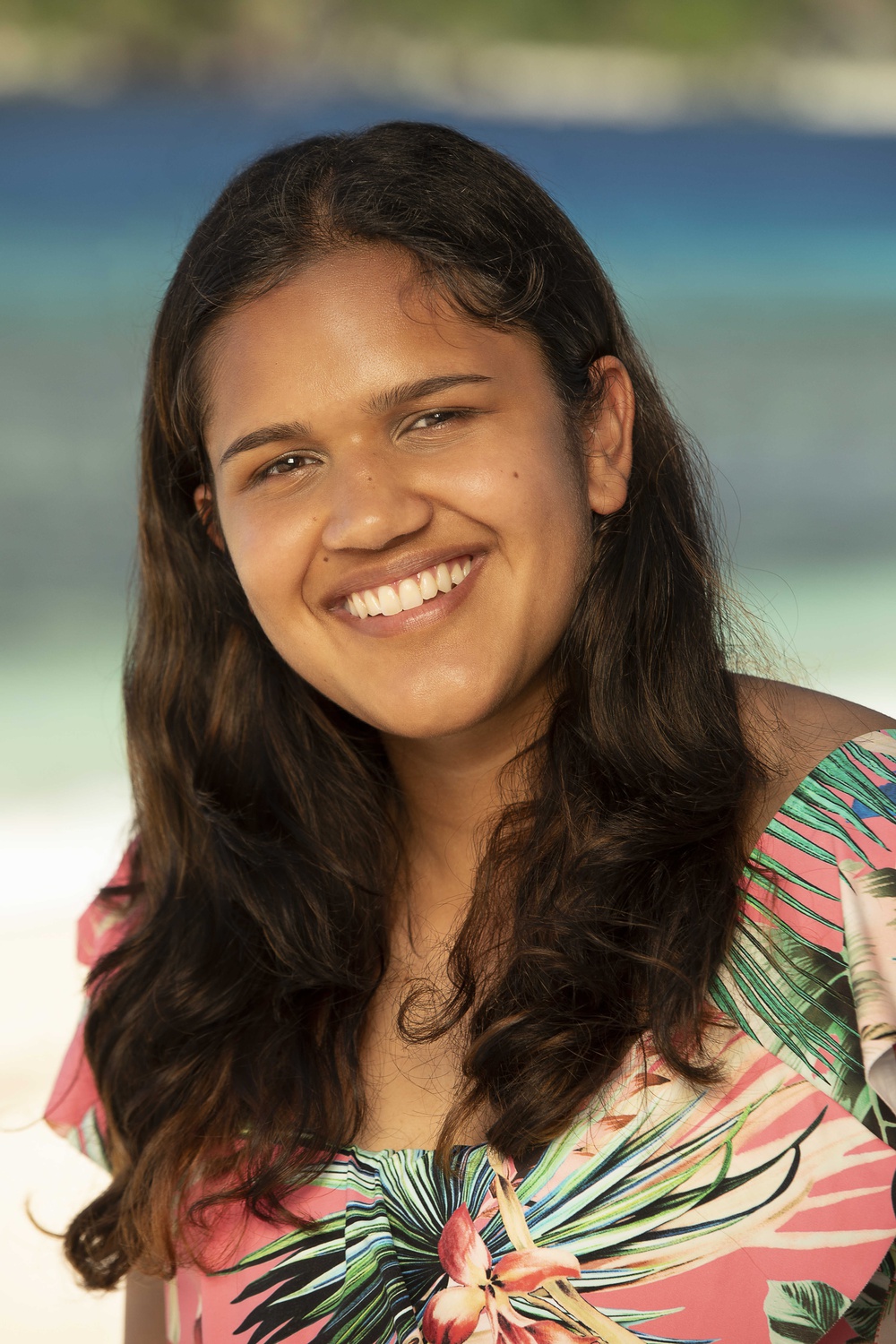 Fueled by Coconuts and Adrenaline, Swati Goel '25 Lives Her 'Biggest Dream' on Survivor

For Goel, the show has been a comfort since middle school — like “chicken soup,” she says. “It’s just the thing I would watch whenever I was upset or sad.” Auditioning for the show was a bucket-list item for her.
By Jade Lozada and Dina R. Zeldin

As she waited to fall asleep on her first night in her new home, Swati Goel ’25 says, “The biggest emotion I felt was scared.” She had always dreamed of being there, but her first day was overwhelming. “It’s truly like being lifted from reality and being put in this little alternate world that is completely cut off from everything else.”

Goel was not speaking about her first night at Harvard. She was reflecting on her first hours fending for herself on the Mamanuca Islands of Fiji as a contestant on the 42nd season of the hit CBS reality competition show “Survivor.”

“Survivor” isolates a group of strangers in a remote location where they must endure the wild with self-made shelter and limited food. Contestants are split into “tribes” to compete against each other in grueling challenges.

But “Survivor” is more than just a physical test. Players are voted out one at a time, necessitating shrewd strategies and alliances between contestants all vying to win $1 million. It’s this element of wit that has gained the show its cult following of over 5 million viewers per episode. “That’s something that people who aren’t ‘Survivor’ fans don’t understand,” Goel says. “Yes, it’s like reality TV, but this show to people is a lot more than just something they watch.”

For Goel, the show has been a comfort since middle school — like “chicken soup,” she says. “It’s just the thing I would watch whenever I was upset or sad.” Auditioning for the show was a bucket-list item for her. “I was so afraid for all of high school that ‘Survivor’ would stop airing by the time I graduated,” she recalls. So Goel submitted a video audition, and the waiting began.

Months passed before she heard back, until one day, sitting in a parking lot, she received a call from a producer. “This has to be a joke,” she remembers thinking, but her disbelief immediately turned to resolve. “As soon as I got that call, I just had this sense of ‘this is gonna happen for me, I’m gonna make this happen.’”

Goel sat for a stressful whirlwind of interviews before finally getting cast, and she wasted no time in preparing for the show. She spent the weeks leading up to filming completing basic training for the Army National Guard, which she had joined at the end of high school. Filming for the show took place from May to June of 2021, when Goel says she was “in the best shape of my life.”

Despite the preparation, Goel found herself mentally unprepared for the reality of island life.

“A small part of me was like, ‘this is fake,’” Goel says. “They truly just left us on an island … There are coconuts, here’s a machete, go kill things and eat.” Goel primarily ate coconuts and crabs, but she often chose to forgo eating so as to not waste energy hunting or finding food.

Against a background of lush palms, white sand, cyan seas — as well as dirt, grime, and island creatures — viewers were invited to watch Goel’s strong early game. From the get-go, Goel and the other younger contestants on her tribe seemed to bond over generational interests like “Harry Potter.” But their fooling around often seemed to frustrate older contestants on the team who wanted to focus on building up a campsite.

As the youngest contestant that season, Goel knew her age could be a liability. “Young women are often viewed as easy targets to pick off at the beginning of ‘Survivor,’ and I wanted to be viewed as someone who can be an asset,” she says. To counteract the stereotype, she emphasized her military background. She was glad to represent young women, as well as the South Asian community, she says. “These are those demographics that haven’t been represented super well on this show.” 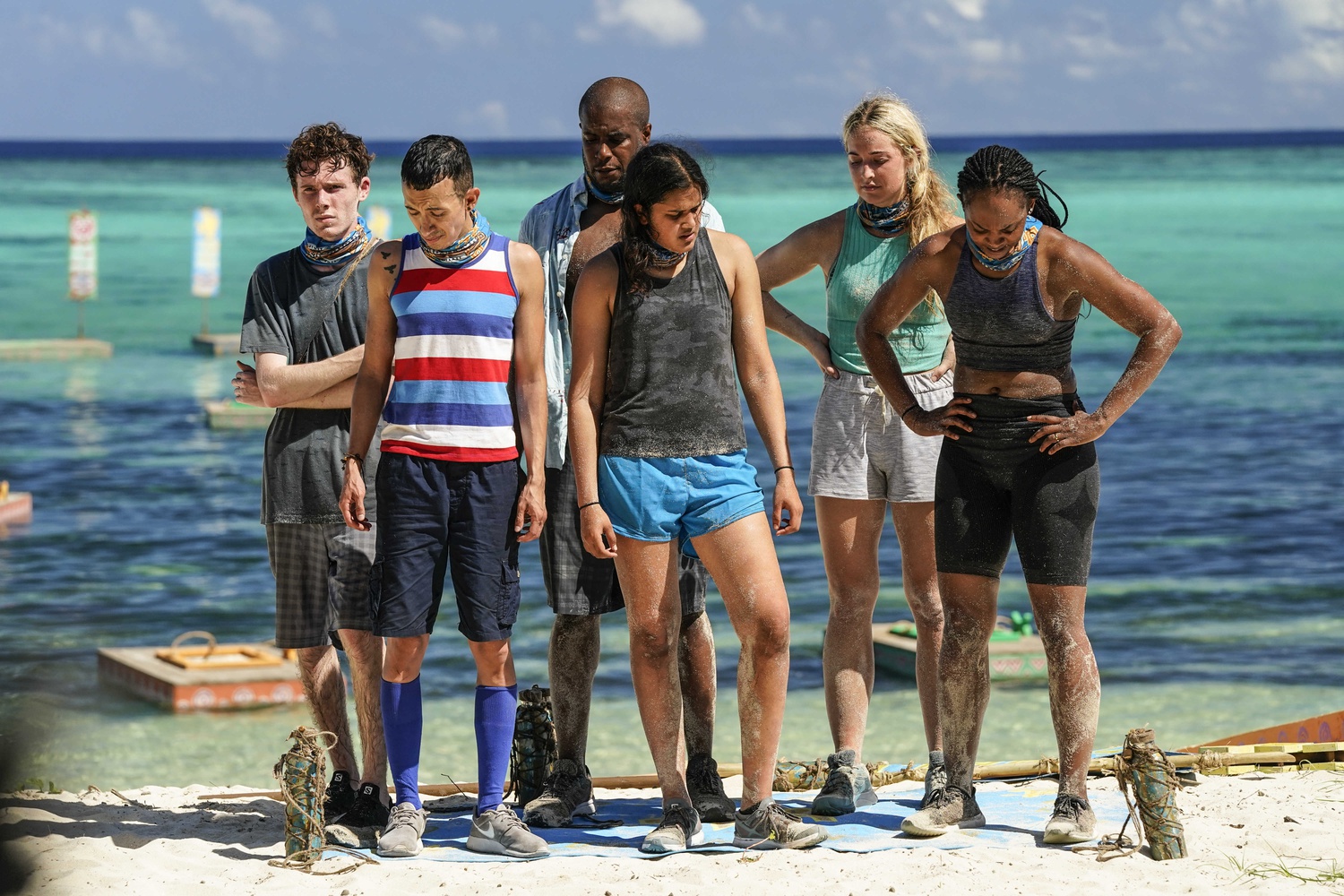 For Swati Goel '25, competing on Survivor was the realization of a long-held dream. By Robert Voets/CBS ©2021 CBS Broadcasting, Inc. All Rights Reserved.

Despite their strong start, Goel’s tribe lost the second challenge and had to go to Tribal Council on Night 3, an experience so dreadful that Goel admitted to the camera, “If I could cut off a finger to not be at Tribal [Council] tonight, I would,” slicing the air with her hand.

Although the team had been faring well, when the team finished last in a challenge, the blame game began as players scrambled to form voting blocs for the upcoming Tribal Council. This is when Goel realized she “ got caught in the middle of too many things,” having promised to three of her tribe members that they were her “Number 1.” Soon, her alleged allies had their own meeting where they discovered her dishonesty. It was an unexpected turn in the social dynamic.

“Everyone likes Swati,” remarks contestant Romeo Escobar in Episode 4. “She’s this innocent 20-year-old. You think she’s just out here for self discovery, she’s scared.” A montage of Goel squatting in the rainforest and beating a coconut with a machete plays on screen, and then Escobar has his epiphany: “Wait a minute. She’s playing, and she’s playing hard.”

Soon after, Goel was voted off. Although her time on “Survivor” was shorter than she had hoped, she refuses to hold any regrets. “I got to live out my dream,” she says. “I’m not gonna sit here spending my life thinking about what I could have done differently.”

Instead, she set her sights on her next dream. “Before I started school, I wanted to go do something for either the country or the world that I could be proud of,” she says. She is now enlisted in the Army National Guard, for which she is currently completing training on weekends.

At the same time, Goel is planning for an initiative called the Open Doors Project, through which she hopes to leverage her “Survivor” fame to “do good” and start conversations about mental health among young people through a podcast and video series.

Her initiative is personal. Although her lifelong dream came true, Goel says she also experienced mental health challenges during her gap year and in her first semester of college. But after “Survivor,” she had the confidence to open up about these struggles. “I think I grew a lot as a person,” she says. “I like the person that I am now a lot more than the person I was before.”

— Magazine writer Dina R. Zeldin can be reached at dina.zeldin@thecrimson.com.