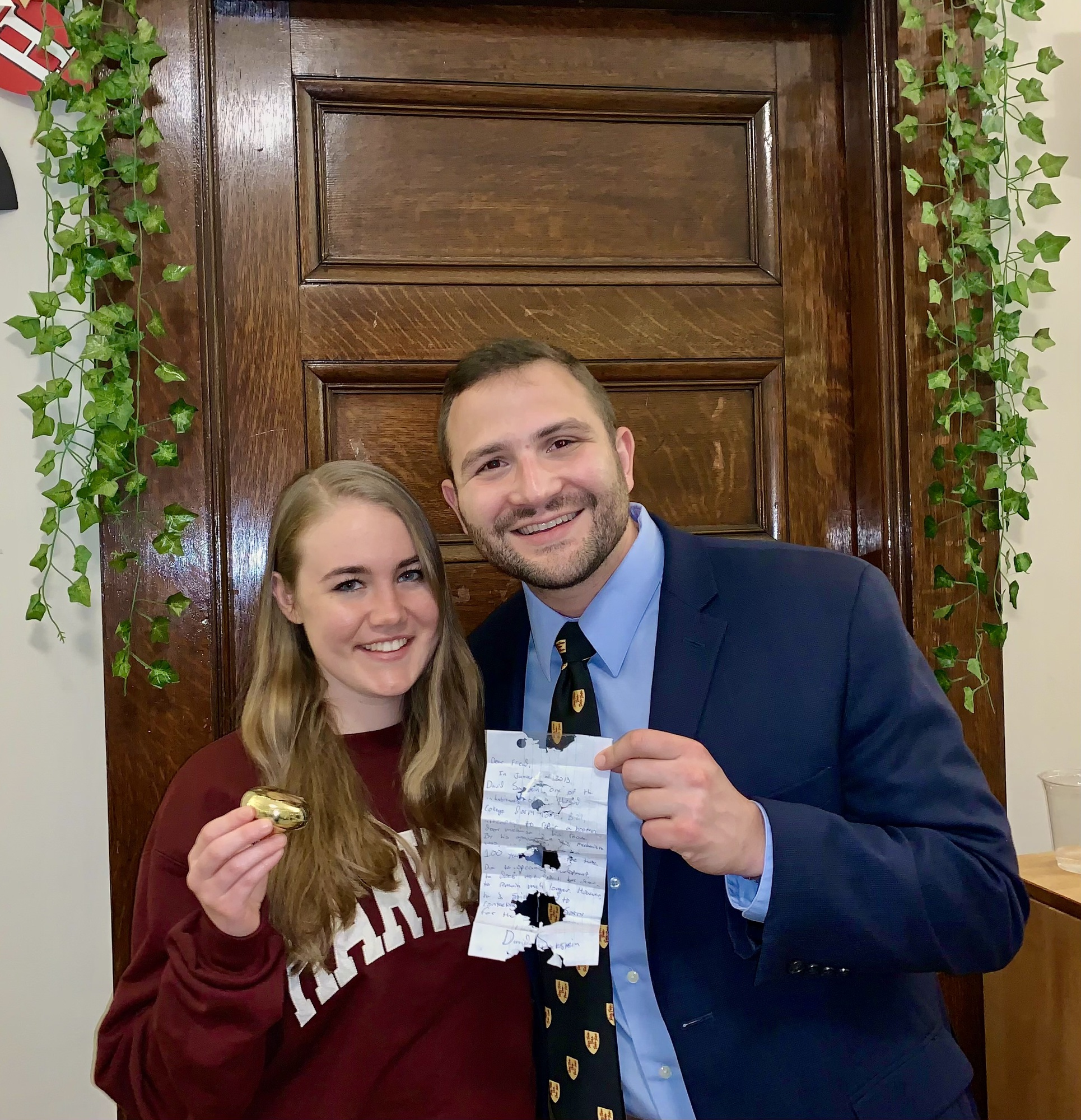 Alexa C. Jordan '22 (left) found a note inside her broken doorknob — planted as a gift to future residents by David F. Sackstein '14 (right). The two have since bonded over the unlikely time capsule.
Advertisement
Advertisement

When the Past Comes Knocking

Sackstein takes a piece of paper off his notepad, writes a few sentences, then folds it up and scrawls a title on the front: “A Gift from the Past.” The two of them take a pair of pliers and slip it into the crevice. Place the panel back on. Tighten the screws. Reinstall the knob. Their very own message in a bottle has just set sail.
By Kya I. Brooks and Chloe E. Gambol 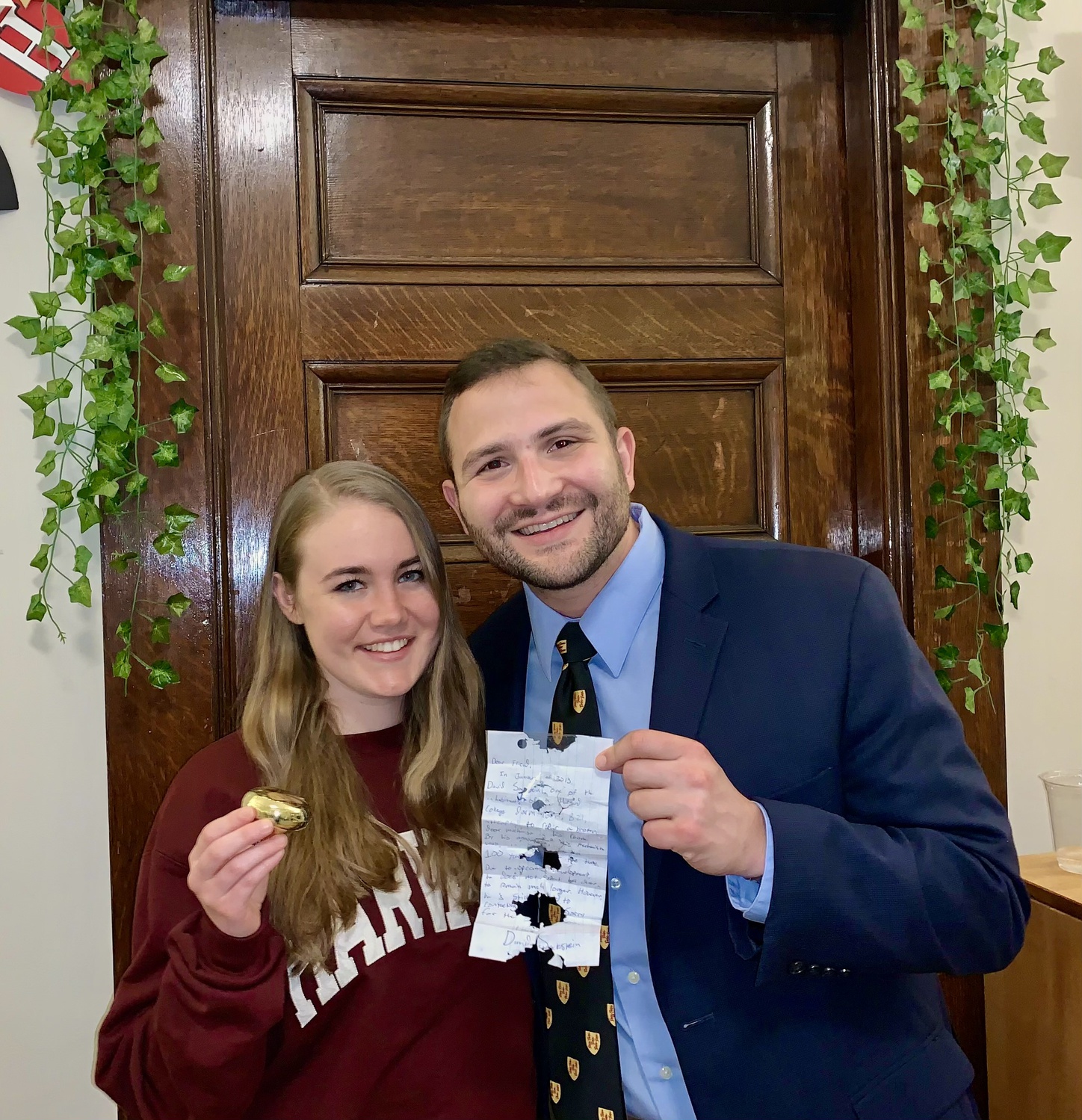 Alexa C. Jordan '22 (left) found a note inside her broken doorknob — planted as a gift to future residents by David F. Sackstein '14 (right). The two have since bonded over the unlikely time capsule. By Courtesy of Alexa C. Jordan

The year is 2013, and roommates David F. Sackstein ’14 and Jose A. Bengochea ’13 are facing the prospect of a broken doorknob in their Adams House double.

In the spirit of Adams House quirk, rather than calling anyone, they decide to tinker around with it themselves.

They toss the knob to the side. Take out the screws. Remove the bronze panel.

They peer inside the dark cavity. An idea arises.

Sackstein takes a piece of paper off his notepad, writes a few sentences, then folds it up and scrawls a title on the front: “A Gift from the Past.” The two of them take a pair of pliers and slip it into the crevice. Place the panel back on. Tighten the screws. Reinstall the knob. Their very own message in a bottle has just set sail.

Right after, Sackstein made a Facebook post, playfully telling his friends about the note he had left to future residents. They didn’t expect anyone to ever read it. Why would anyone bother to look inside of a doorknob? 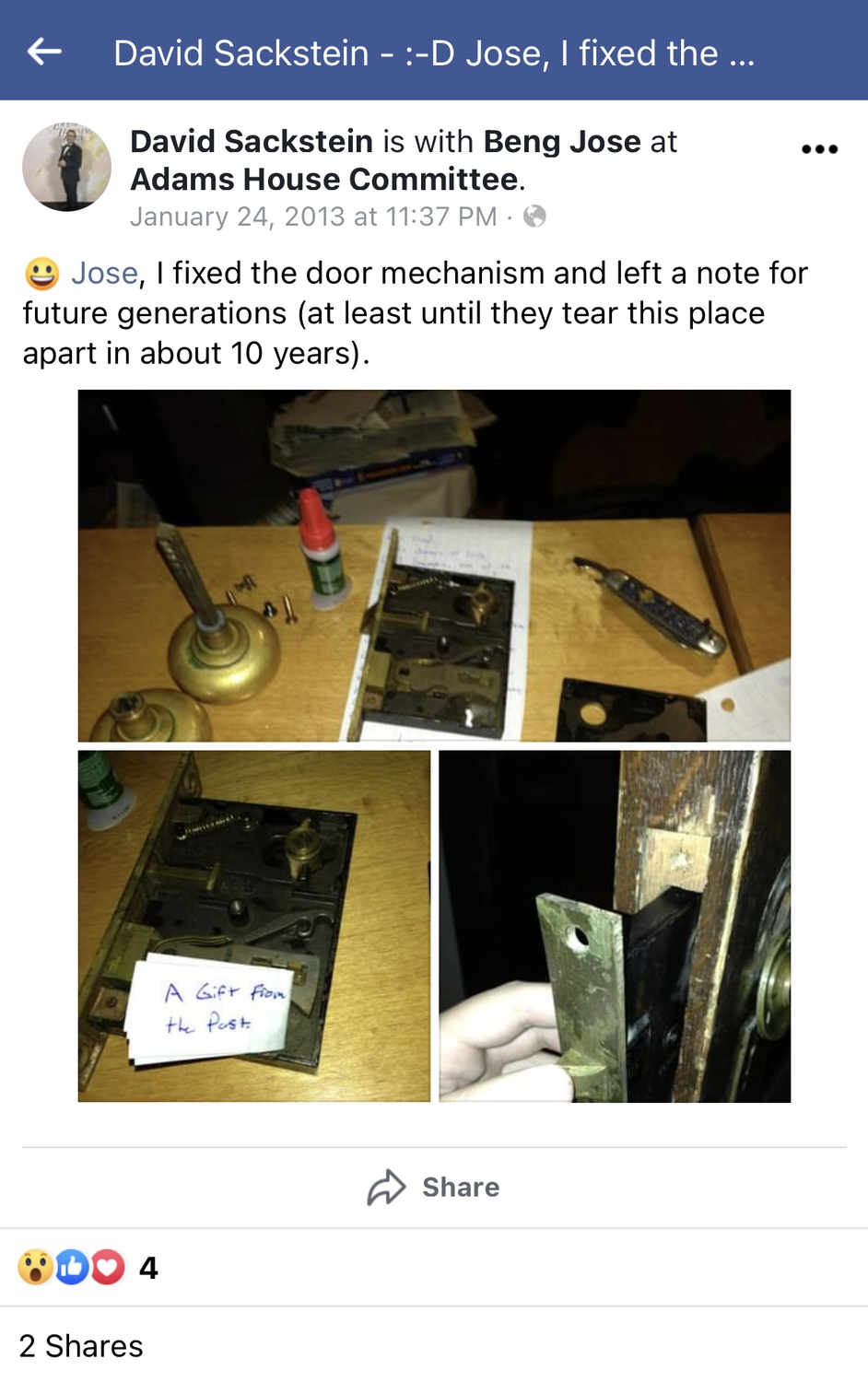 In 2013, Sackstein posted on Facebook about the note to future residents, but never expected anyone to actually find it. By Courtesy of David F. Sackstein

Nine years later, Alexa C. Jordan ’22 and Sophie M. Woodward ’22 finally decide to do something about their pesky doorknob.

On the morning of the first day of spring classes, Carlos Miranda, a custodian in Adams House, is in the room dismantling the device when Jordan, standing by the fireplace in her common room, spots scraps of paper littering the rug on her bedroom floor.

She immediately walks over to investigate. Reaching inside, she pulls out a small folded piece of paper.

“A Gift from the Past” is written on it.

She unfurls the letter.The paper is littered with dirt and holes, disrupting the text, but she is able to decipher most of it. It reads:

In January of 2013, David Sackstein, one of the inhabitants of a Harvard College dorm room, B21, attempted to repair a broken door mechanism in his room. By this assumption, this mechanism was [indecipherable] close to 100 years old at the time. Due to upcoming development, he does not expect his door to remain much longer. However, he is still [indecipherable] to contacting [indecipherable]. Sorry for the [indecipherable]. 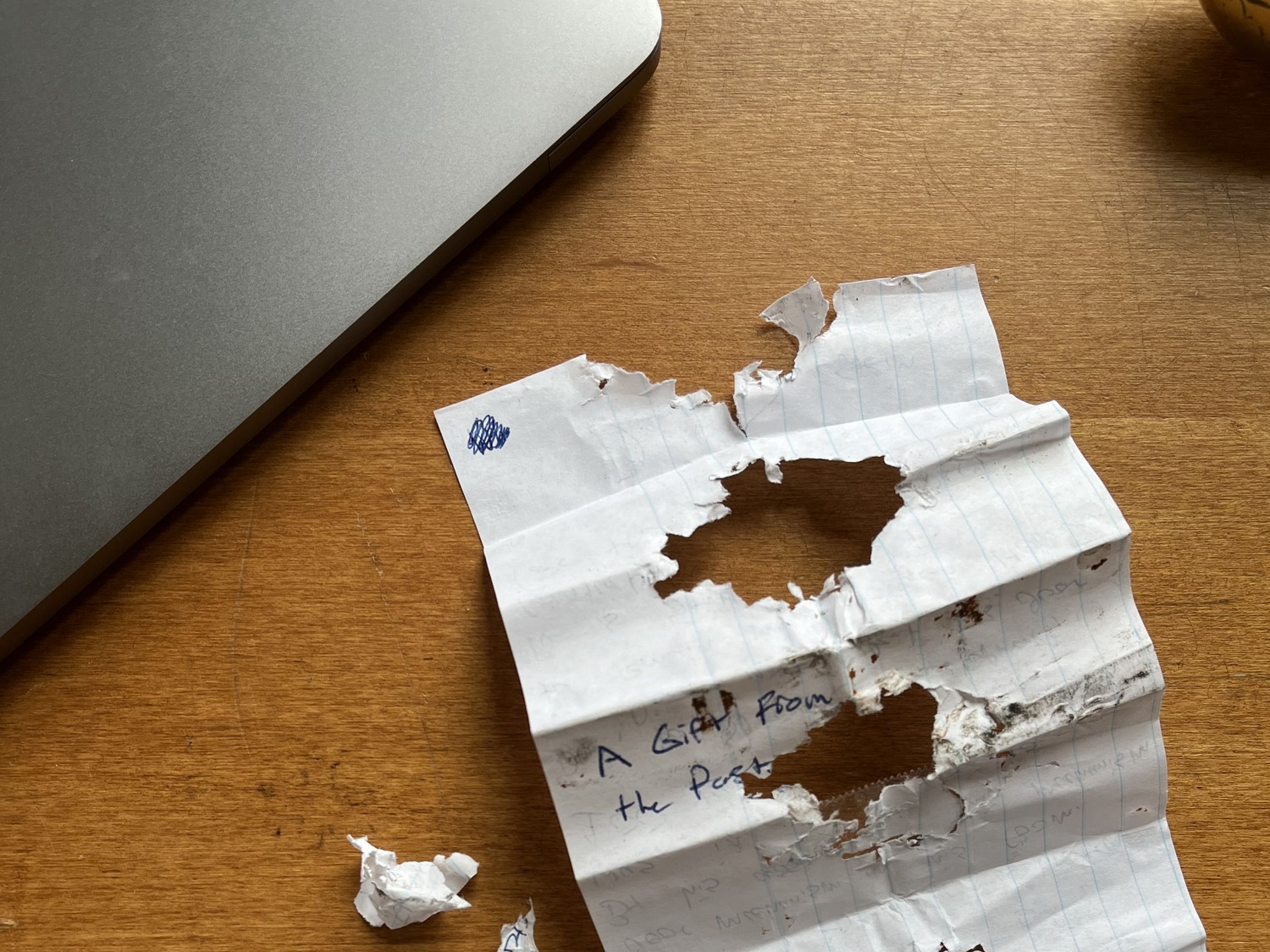 The note, entitled "A Gift from the Past," was weathered and torn, but still legible. By Courtesy of Alexa C. Jordan

Jordan and Woodward couldn’t believe what they had found.

“It was a gold mine, you know? This is something that doesn’t happen. It was a gift from the past,” Jordan says. “It was like the ecstasy you feel on a Christmas morning when you find something so surprising, so fun.”

The next weeks of her and Woodward’s life were dominated by searching for the writers.

With only Sackstein’s full name and graduation year, Jordan tracked him down on LinkedIn, where she reached out to his company email.

“Once again, it felt like a jackpot, and I felt like a sleuth,” she says. “It also reminds me that we are able to connect with alumni much easier than we might think, and it’s up to us to utilize those connections and really a fantastic network that we are so blessed to now be able to benefit from.”

Sackstein responded immediately to Jordan’s cold email. “We never expected in a million years anyone to find it, but when Alexa reached out and Sophie reached out, it was a real treat,” he says.

Westmorly Court, the Adams dorm where Jordan and Woodward live, is the next Harvard dorm building in line for renovation, so they discovered the note in the nick of time.

“We’re both kind of sentimental people,” Sackstein says. He adds: “We weren’t sure what little Easter eggs and marks and time capsules we might be able to leave behind, thinking that house renovation was on the horizon.”

Adams House’s legacy of historical and artistic traditions inspired Sackstein and Woodward to create their note. For example, beneath the dining hall run tunnels painted with art and poetry and filled with introspective musings and hopeful messages from generations of Harvard students past.

“We just thought, ‘Oh, this is our little way to add to the history of everybody who’s had a chance to have a relationship with this institution and has been shaped by it but has also shaped it in their own way,’” Sackstein says.

In the grand scheme of things, the nine-year lifespan of Sackstein’s letter does not seem so long. Yet, it’s half a lifetime for many Harvard undergraduates. “It felt like it was bridging two generations,” Jordan says. She adds: “I was 13 years old when this letter was being written, and I’m now at Harvard. I had no idea I would be at Harvard nine years ago, right? That wasn't on my radar.”

Nine years after writing the note, Bengochea now lives in California and works for his own company, while Sackstein is currently a tutor in DeWolfe but plans to step away next year to further his law career. The email they received from Jordan, however, was a pleasant reminder of their time as undergraduates. Sackstein was touched to know that “there’s two people living in that suite again, and that they’re enjoying their time there.” He adds: “I think that’s one of the more touching parts of what’s happened, for me at least, to know that this is something that maybe helped make two undergrads who are just returning to campus feel a little bit more at home and a little bit more a part of things.”

The discovery of the note also sparked a friendship between Jordan and Miranda, the custodian. When they see each other in the hallways of Westmorly Court, they stop to chat like old friends who share a secret.

For Jordan and Woodward, finding the letter has sparked a conversation about what it means to exist here at Harvard — an institution that often seems too old for current students to comprehend.

“I think we all want to leave something behind at Harvard. It’s just such a big place and such a big institution in which sometimes it feels hard to make our mark,” Jordan says. She adds: “I will never forget when I found a hidden note inside of my dorm.”