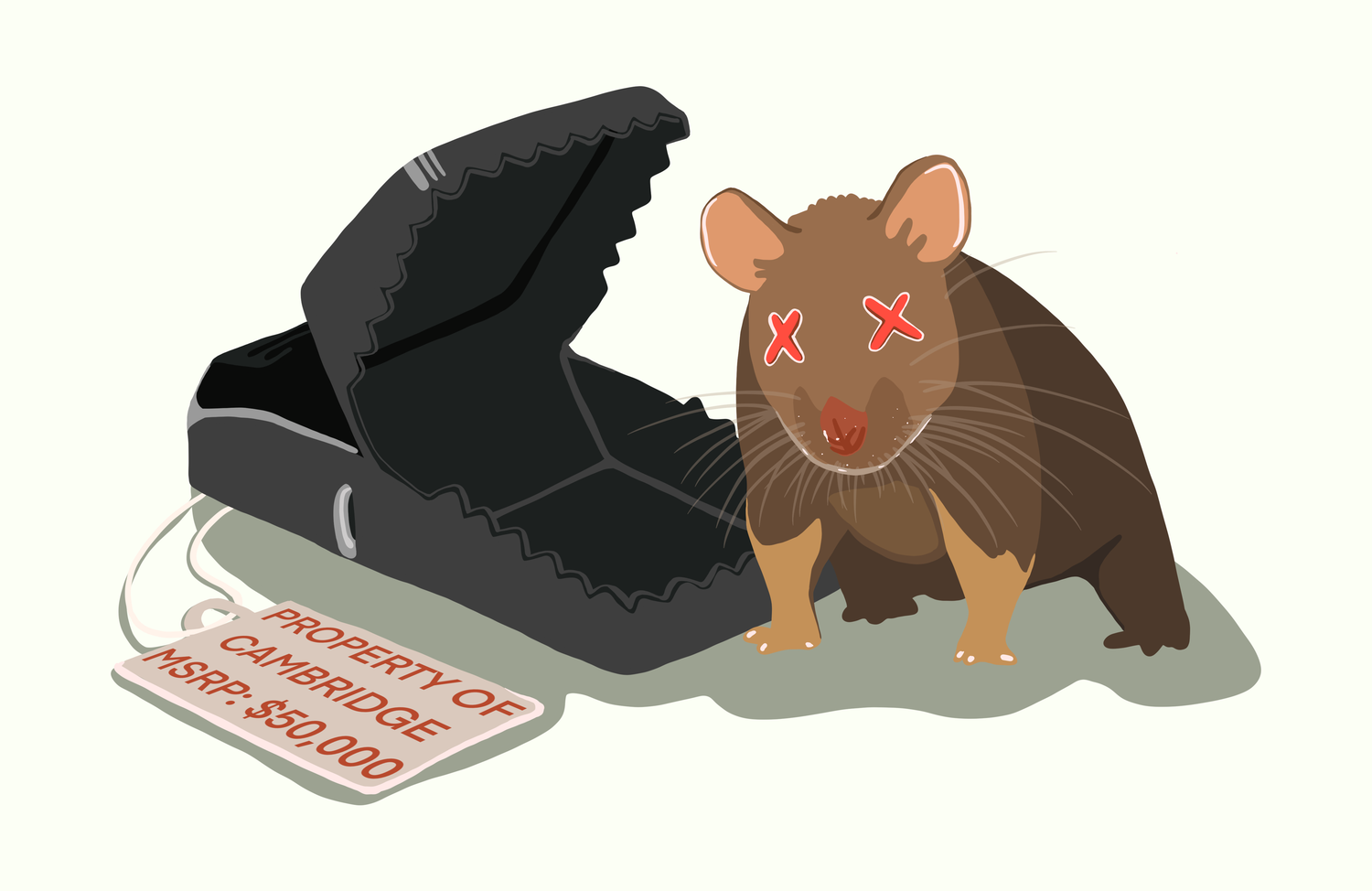 Cambridge is shelling out $50,000 for high-tech rat traps. But will they be enough to stop the ultra-savvy rats that roam Harvard's halls? By Karen Choi
Advertisement
Advertisement

I dream of a college experience where I can walk the streets of Mass. Ave without the fear of encountering one of these monstrous creatures careening toward me during a late-night CVS run. Even so, I know better than to underestimate what the rats around here are capable of, and I worry that our little friends here might be clever enough to evade the devices poised to eliminate them.
By Kyle L. Mandell

I can take on a cockroach. If I saw one crawling around my room, I would be disturbed, but capable of disposing of it. Ethically, of course.

But the few times that I’ve encountered a Cambridge rat — which, I swear, are more robust and vicious-looking than any rodent you’ve ever encountered before — have sent me shrieking, spiraling, and begging for mercy on the cold, red-brick sidewalk.

So that’s why I was immensely relieved when the city of Cambridge announced that it plans to install $50,000 worth of high-tech rat traps around town. These “Smart Boxes” will electrocute their victims after luring them inside, and some will even be placed in “Smart Pipes” that flush the grisly remains away.

I dream of a college experience where I can walk the streets of Mass. Ave without the fear of encountering one of these monstrous creatures careening toward me during a late-night CVS run. Even so, I know better than to underestimate what the rats around here are capable of, and I worry that our little friends here might be clever enough to evade the devices poised to eliminate them.

Much like the students they scamper amongst, Harvard rats are a diverse and exceptional crop. Take the Kirkland rats for example, who live in a building that stands almost exactly as it was built in 1931. The few times I’ve walked through Kirkland’s crumbling (charming?) halls, I’ve heard the rodents scurrying across the ceilings and walls around me — an unmistakable heavy pitter-patter. After living in this painfully “historic” building, those rats have become scrappy. Like all Kirkland residents, they have learned to settle for less, and with such resourcefulness and grit, it would take more than a Smart Box to capture them.

And don’t even get me started on the Adams rats — they’ve probably built empires down in the tunnels. Having recently won The Battle for the D-Hall over encroaching an fruit fly offensive, Adams rats have undoubtedly developed an advanced, tactical military force, unlikely to be stopped by a Smart Box.

Here at The Crimson, too, I fear we may have trained our rats to be too smart for our own good. Lounging safely within the archaic walls of 14 Plympton St., these rats have certainly learned a thing or two from the writers, reporters, and editors whose leftover Jefe’s they enjoy in the wee hours of the morning. I worry that they’ll hear news of the latest method to outsmart a Smart Box before it even comes to print. At least they’d definitely fare better than the Lampoon rats, though. Poor fellas over there haven’t slept a lick since construction started over a century ago.

Across the river is an elusive bunch. The athlete rats are tough — maybe even strong enough to withstand the electric shock promised by the inventive Smart Box technology. But capturing a rat on a scooter? Impossible. Our rodent friends at the Business School are quite clever as well. Maybe the traps were just part of their scheme to get Cambridge to spend more money on an unfeasible venture.

So as the rat trap installation comes under way in June 2022, you’ll see me walking through campus with a new stride in my step — as long as we remain one step ahead of these pestilent critters at all times. Maybe then we’ll reach the vermin-free Harvard experience we all dream of.