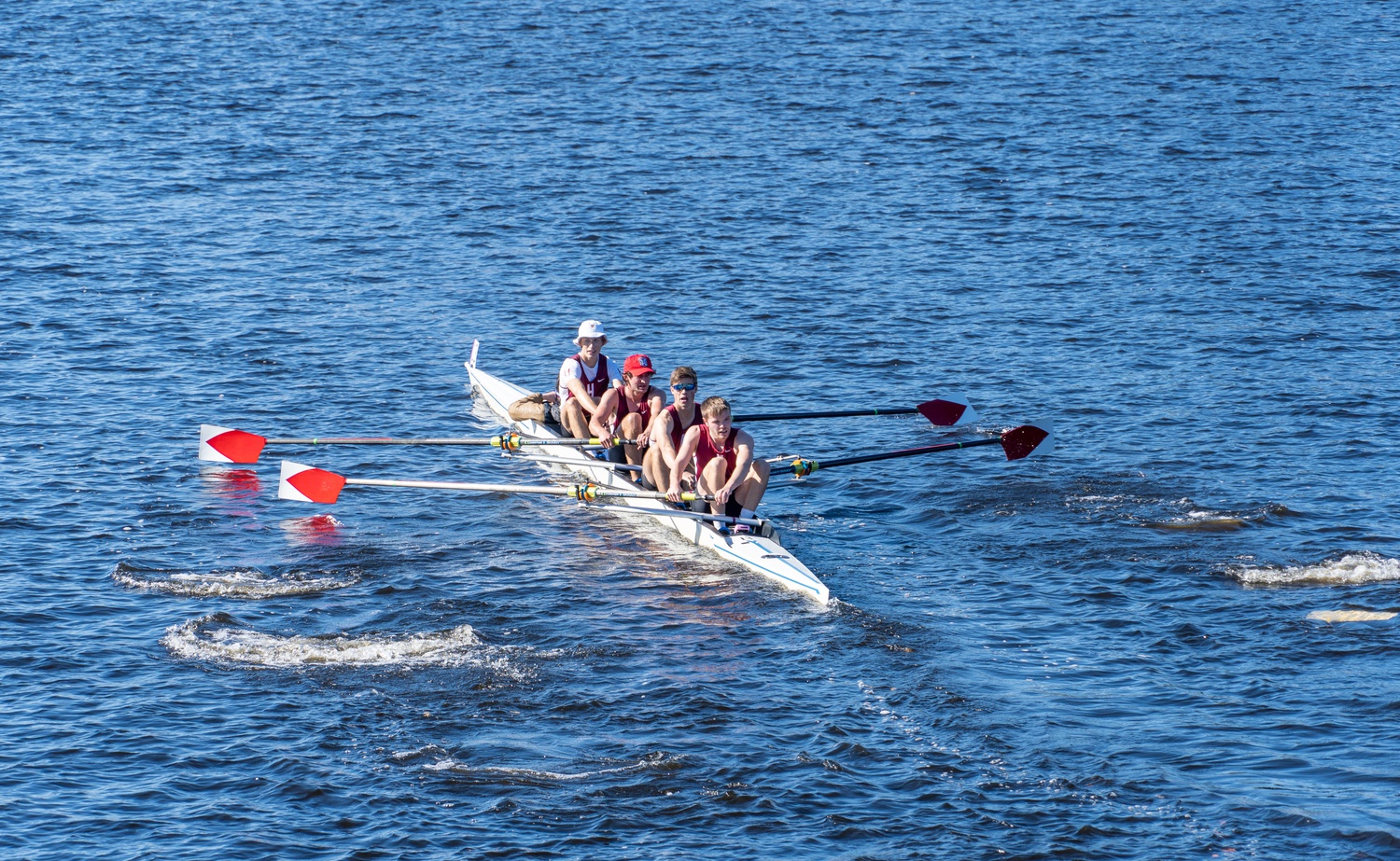 It wasn’t the triumphant return it may have hoped for, but for the first time in almost three years the men’s lightweight rowing team raced the 2,000 meters along the Charles River this past Saturday, fielding five boats in a competitive bout against Dartmouth and MIT.

The No. 8 Crimson fell to Dartmouth in the Biglin Bowl, with the first varsity boat being edged out by the No. 9 Big Green by a margin of six seconds. From front to back, that boat featured first-years Brahm Erdmann and James Stevenson, sophomores Ryan McCarthy and Harrison Schofield, juniors Henry Bellew, Greg Cain, and Cameron McInroy, and senior Jake Marlo, and first-year coxswain Anya Cheng. The boat finished with a time of 6:36.4, good enough to beat third-place No. 11 MIT by a comfortable margin.

“It’s early in the season,” said Bellew in an interview. “So even though the result in this regular season race wasn’t what we wanted, we learned a lot, and we’ll take those lessons and apply them to our practices this week.”

One factor working against the Crimson in the race was the weather, which deteriorated as the early-morning races went on. The boats faced persistent headwinds, increasing the toll on the rowers. Bellew pointed to Dartmouth’s ability to adjust immediately to the conditions and row strongly through the wind as the decisive factor in its victory, with the Crimson struggling to adjust to the unfamiliar challenge. Dartmouth was able to cling on to its early lead in the race despite a furious comeback attempt by the Crimson.

With this narrow loss, the Crimson broke a streak of 11 consecutive Biglin Bowl victories, the last of which came in 2019. Named after the famous rowing brothers John and Barney Biglin, the race has brought Harvard, Dartmouth, and MIT together each year since 1955 to compete. In total, the Crimson has won the event 57 times, the Engineers five times, and with this victory the Big Green earned its fifth title as well.

Before the first varsity race launched at 7:30 am, the fourth and fifth varsity boats for Harvard teed off against Dartmouth’s fourth varsity team (the Big Green only fields four boats). In that race, the 4V team barely fell to Dartmouth by one boat length, finishing with a time of 7:17.7 to Dartmouth’s 7:15.4. The 5V boat for Harvard rounded out the race in just over 8 minutes.

In a bright spot for the lightweight squad, both the second varsity and third varsity teams prevailed in their races. The 2V boat bested the Engineers with a time of 6:47.6, while the 3V boat trounced its Cambridge neighbors by almost a 30-second margin. This victory was especially impressive as it came amid significantly declining conditions outside, with the wind raging for the final race of the morning.

“[The second team boat] had a difficult race two weeks ago,” said Bellew referring to the team’s regatta at Overpeck Park, NJ two weeks prior. “They didn’t perform the way they wanted to at that race, but they made a huge amount of improvement in the bye week that we had last week and in the lead-up to the Dartmouth race.”

Despite the narrow defeat for the first varsity boat, the Crimson can take solace in finally being able to return to the Charles River to compete in front of a home crowd, an experience that was new not only to the first-years on the team but to many of the upperclassmen.

“There’s nothing better,” Bellew said. “There are certain things you can only do at certain points in your life and you realize how special they are.”

The lightweight rowers will have the chance to show what they learned about rowing in rough weather when they travel to race against Delaware and Navy on the Severn River in Annapolis, Md this weekend. The Crimson’s quest for redemption will start Saturday morning, April 23.