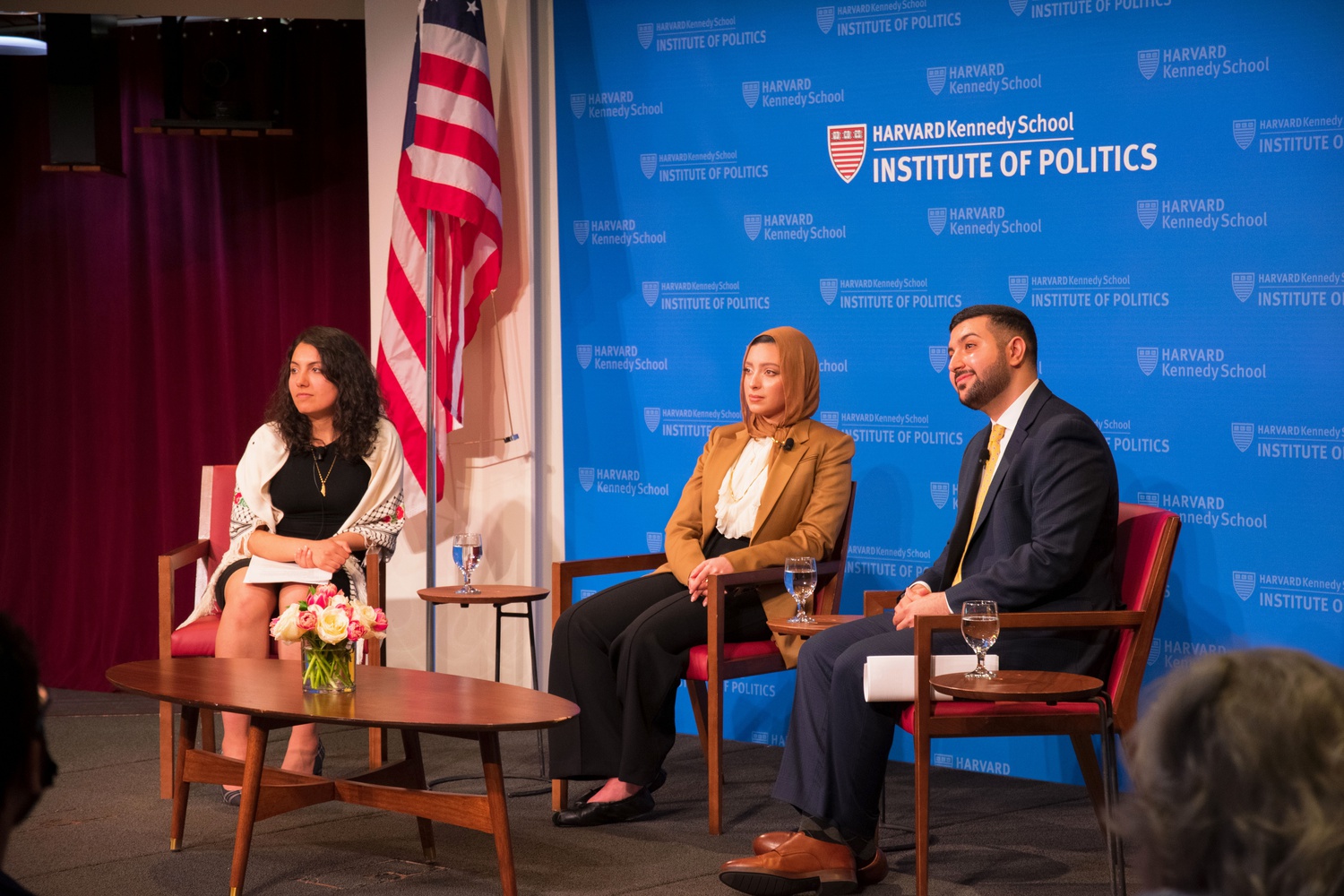 Noor Tagouri, a journalist and podcast producer, and James Zogby, president of the Arab American Institute, spoke about their experiences with storytelling and political activism as Arab Americans at a Harvard Institute of Politics forum on Monday evening.

“We wanted to create an audio experience for people to be able to — while listening — feel like they’re listening to stories that their ancestors are telling them,” Tagouri added.

Zogby said he was inspired to become a political activist after causing an uproar for reporting Palestinian stories.

“My wife and I spent a summer in ’71 living in refugee camps in Lebanon and Jordan as I was collecting stories to write my dissertation,” Zogby said.

“I came back and I wrote articles on it and all hell broke loose because I had done what wasn’t supposed to be done — I humanized the Palestinian story,” he added.

Zogby said he founded the Palestine Human Rights Campaign because other human rights organizations refused to advocate for the cases Zogby brought to their attention.

“We have enormous compassion for Ukraine,” Zogby said. “What we did to Iraq was so much worse, and never understood and never felt in the same way because the human lives don’t count there.”

Tagouri said at the onset of her journalism career, she was constantly labeled an activist whenever she spoke at public events because of her identity.

“The only reason I was referred to as an activist was because I wore the hijab,” Tagouri said. “I couldn’t shake it because I knew that it was me being put into a box based on what my perceived identity was.”

In an interview after the event, Ramadan said an incoming freshman student whom she met at an open house event embodied the significance to her of having an Arab American Heritage Month event.

“I can’t imagine what her experience was like to look at the IOP and the forum, and for the first people she ever sees on a stage to be a Muslim woman wearing a hijab — and the prefrosh also wore a hijab — and then a Lebanese Arab man on the TV screen,” Ramadan said.

“I’m in my third year at Harvard, and this is the first time I’ve ever seen people with my identity — that are Muslim or Arab, that speak in this way — to be on a forum stage,” she added. “It felt really emotional because it felt like I was seen.”

The starting point for Tagouri’s current podcast series came from a personal family story. She said that an errant U.S. airstrike killed five members of her family in Libya in 1986.

“The trauma of that incident had carried on throughout generations in our family,” she said.

Tagouri said Western media did not report on the deaths of her family members when she searched the archives.

“When you look into the story of the the airstrike, the acknowledgement of their deaths is nowhere,” she said.

Barbara Rosewicz — a longtime journalist whose husband, Gerald F. Seib, is an IOP resident fellow — told Tagouri during the audience Q&A that she visited the aftermath of the airstrike that killed Tagouri’s family while reporting for The Wall Street Journal.

“I stood in that house the morning after the bombing,” Rosewicz said, leaving Tagouri speechless.

“I would love to know, just from your perspective,” Rosewicz asked, “What happened with the family?”

With Tagouri and other members of the audience in tears, Zogby jumped in.

“I’ll tell you one thing that happened to the family,” he said. “A representative of that family is sitting here on stage telling her story.”