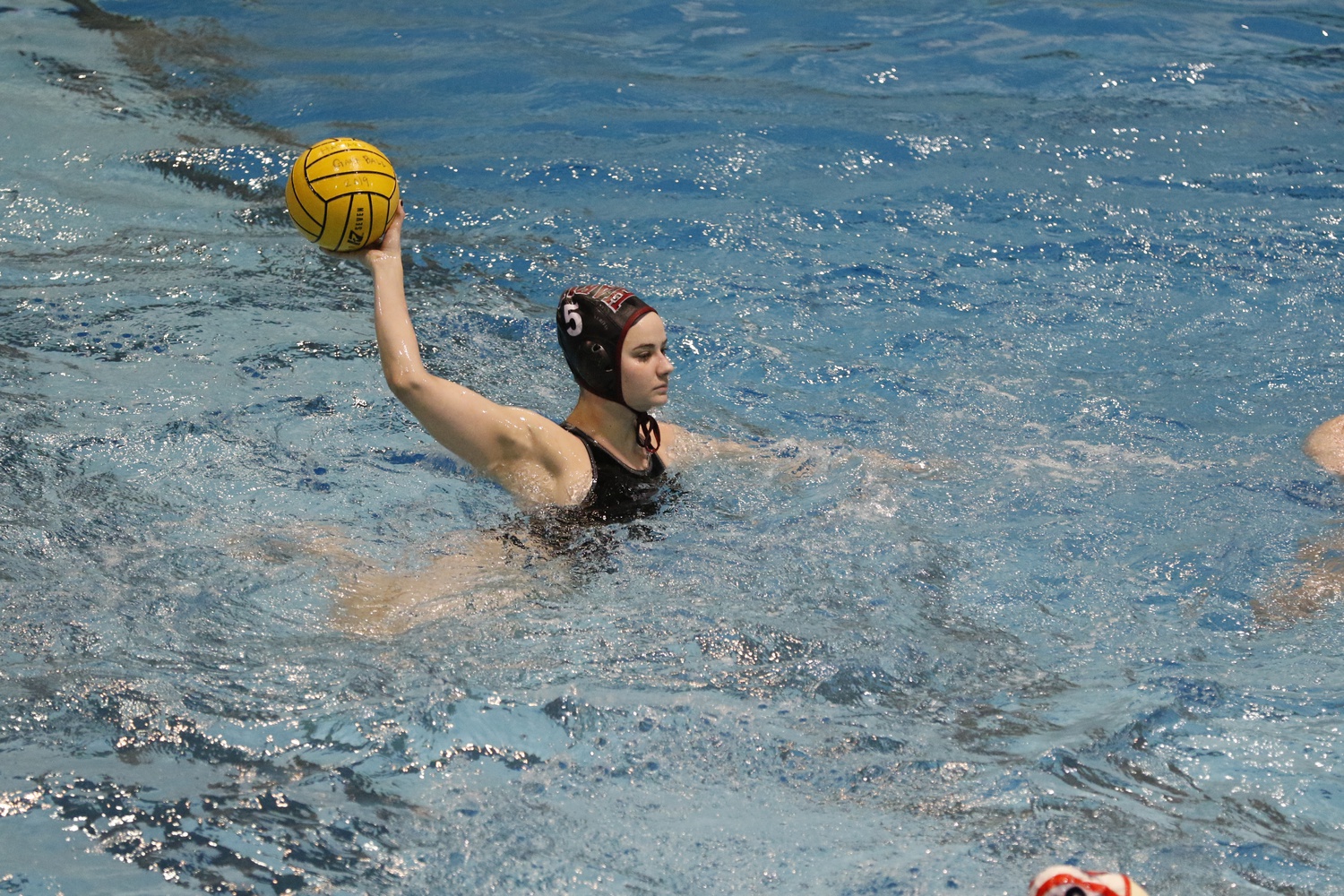 Harvard women's water polo faced off against Bucknell on March 3, 2019. This past weekend, they played in the Crimson's first-ever College Water Polo Association (CWPA) championship game and fell to No. 7 Michigan. By Timothy R. O'Meara
By Ever A. Marinelli

Last Sunday marked the end of a historic record-breaking season for Harvard women’s water polo. The Crimson finished with the highest number of victories and lowest number of defeats in program history, bested rival Princeton for a third time in the semifinal, and advanced to its first championship game, where the team ultimately fell to No. 7 Michigan.

“This team is the best women’s team I have coached at Harvard,” head coach Ted Minnis stated confidently. “I am very proud of our group … and playing in a championship game was pretty special.”

No. 17 Harvard (23-7, 9-3 CWPA) began the weekend with a decisive 16-0 win against Mount Saint Mary's (8-24, 1-11 CWPA). The shutout from junior goalie Zoe Banks and freshman goalie Anne-Charlotte Gillard was the second this season – the first also from Banks against Mount Saint Mary’s at the start of conference play in February – and the third shutout in the Crimson’s varsity history.

That confidence carried into the next day, where the squad locked in an 11-9 victory over its rival, No. 20 Princeton (20-10, 8-4 CWPA). Saturday’s win was Harvard’s third consecutive victory over Princeton, a definitive change of pace from the Crimson’s 0-4 record with the Tigers prior to this season.

Though Princeton closed the gap slightly in the fourth quarter, Harvard maintained a comfortable three to four point lead for a majority of the game. Junior attacker Evan Tingler tallied three goals, and senior center defender Inde Halligan, junior center Grace Thawley, and freshman attacker Erin Kim scored two each. The squad started off strong and was able to put pressure on the Tigers from the first quarter while maintaining their usual solid defense.

Against a challenging opponent like Princeton, the team needed more than just their excellent gameplay and coordination between defense and offense. Tingler highlighted the importance of the mental game, and noted that a confident mentality – which she’s seen develop considerably since her freshman year – was a critical factor in toppling their rival.

“Coming in after COVID … [we realized] this is a blank slate and an opportunity to make Harvard women’s water polo whatever we want it to be,” Tingler said. “We were like, ‘this team right here is not going to lose to Princeton,’ and no longer are we a team that loses to Princeton every time. In fact, it’s the opposite.”

The win sent the team to their first ever championship game, where they faced off against No. 7 Michigan (26-8, 12-0 CWPA). Despite an incredible effort and a strong defensive plan, the Crimson suffered on offense and fell 10-4 to the Wolverines, who were highly favored to win.

“Obviously, Michigan is number seven in the nation, full scholarships, they’re very heavily funded, and they have really really good players from all over the world,” Tingler said. “We needed to shut them down defensively and so we came in with a solid defensive plan, but in that game our offense was lacking.”

Minnis also noted that he felt the team missed some shots they should have made, but emphasized how proud he was of his players and their tenacity while rivaling for the conference title – a high-stakes position they had not played in before.

Though the loss itself was certainly hard, harder still was the conclusion of such a momentous season. Minnis and players alike noted that the truly difficult task was saying goodbye to such an excellent group of players.

“You know it’s going to end at some point but this group is one that I have thoroughly enjoyed coaching and I won’t coach this exact group again,” Minnis said. “So [the loss] isn’t sad, it’s just more sad that we won’t compete together again.”

“We had incredible upperclassmen coaching us and guiding the team,” said Gillard, reflecting back on her first year. “Our teammates served an integral role in helping us succeed this season.”

The team looks forward to welcoming its new members in the fall and continuing that drive and enthusiasm that made the 2022 season so exceptional.

“It’s a very special team that loves each other and fights for each other in and out of the pool,” Tingler said. “We look around in the water and everyone’s smiling, laughing, having a good time with each other. It’s just really special.”

—Staff writer Ever A. Marinelli can be reached at ever.marinelli@thecrimson.com.