No. 12 Men's Lacrosse Set for Suspenseful Final Weekend After 19-16 Comeback over No. 3 Princeton 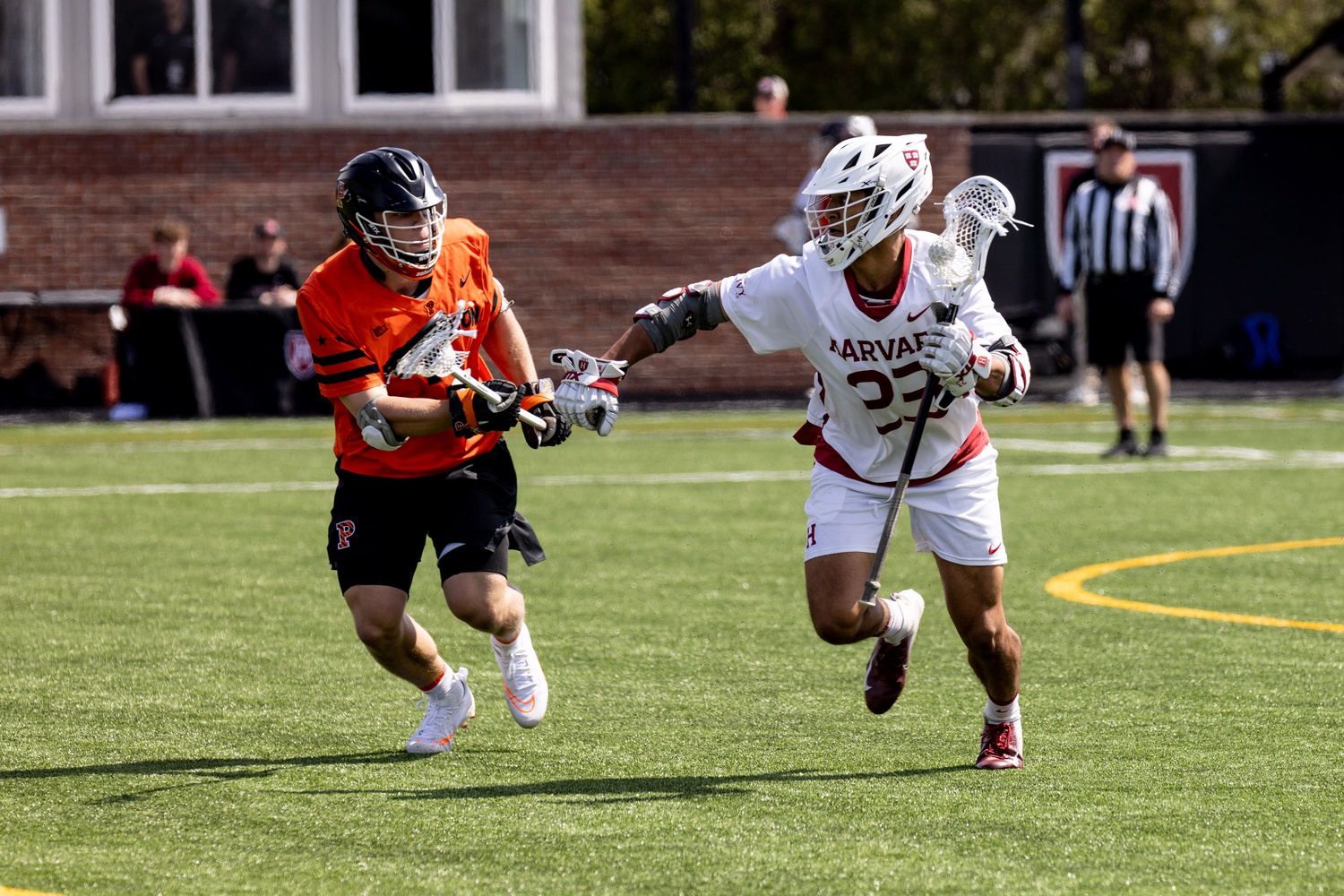 Junior midfielder Isaiah Dawson sizes up his Princeton defender during a 19-16 victory over the Tigers on Saturday. Dawson helped Harvard to an epic comeback, ensuring that the Crimson will control its playoff destiny next week against Yale. By Dylan J. Goodman
By Katharine Forst and Thomas Harris, Crimson Staff Writers

On Saturday, April 25, Jordan Field was electrified by the presence of over 2,400 fans as the No. 12 men's lacrosse team toppled the No. 3 Princeton Tigers. Alumni, fans, and families were there to celebrate the team’s 2020, 2021, and 2022 senior classes, and the energy they brought was pivotal in the team’s victory. The win catapulted Harvard into a five-way tie with Yale, Brown, Princeton and Cornell for first place in the Ivy League and set the stage for a pivotal game against the Bulldogs this upcoming weekend. It will be the last contest of regular season play, a matchup between two historic rivals with massive title implications.

“It’s an epic rivalry in every sport in Division I athletics. Going down there, it might be their senior day as well. I think that it is just another chance to get better, another chance to compete, and maybe give us a chance to keep on playing,” head coach Gerry Byrne stated.

Of the Ancient Eight lacrosse teams, all but Dartmouth rank in the top 20 of Division I. This upcoming weekend of play will determine which four teams qualify for the Ivy League Tournament to determine the conference champion. The qualifying process will be a hard-fought battle that comes down to not just win-loss percentage, but the quality of those wins, timing of the wins, as well as a number of other statistical factors. There is no clear number one team in the league, with each program making a run at different points throughout the season.

On Saturday, Harvard struck first on a goal from first-year midfielder Owen Gaffney, who drove down the left alley before burying it in the back of the net. The first quarter saw both teams compete evenly, and by the last whistle Princeton was on top 5-4. Princeton picked up momentum at the start of the second, scoring four straight to make it a 9-4 lead. However, the Crimson chipped away at the lead, gaining some steam with goals from first-year midfielder Miles Botkiss to break the run, and junior defensive-midfielder Bryn Evans.

Harvard worked well in its sets on both ends. The offense, led by its trio of attackers – senior Austin Madronic, junior Hayden Cheek and first-year Sam King – spread out well, utilized space, and played patiently, not forcing its shots or feeds in the middle.

“We played with confidence. We went into this game knowing that if we played our game the right way we were going to come out with a dub. And that’s exactly what we did. So, we executed our gameplan,” Botkiss noted.

The middies had a great impact on offensive movement, and a number of players stepped up with impactful plays in pivotal moments. Byrne emphasized that a key to the team’s success was the cohesion of younger players alongside veterans. This was clear in midfield play, with first-years Andrew Perry and Lucas Hillsenrath working alongside players like junior Isaiah Dawson and senior Charlie Olmert to facilitate ball movement from the top.

On the other side of the field, the defense, which showcased the communication of first-years Tommy Martinson and Collin Bergstrom , as well as junior Chase Strupp, played one of its strongest games of the season. The unit did well talking through rotations on the man-down, and had confidence clearing 23 of 26 takes. First-year Ray Dearth and junior Chase Yager were instrumental in clearing the ball across midfield, and played well in their one-on-one matchups.

“I think this game our defense played well as a cohesive unit and our communication was on point; we excelled at our man-down play,” noted first-year LSM Vince Cresci. “After getting stops we were able to push transition through our d-middies which gave us tons of opportunities to push the fast break and get early offense going.” 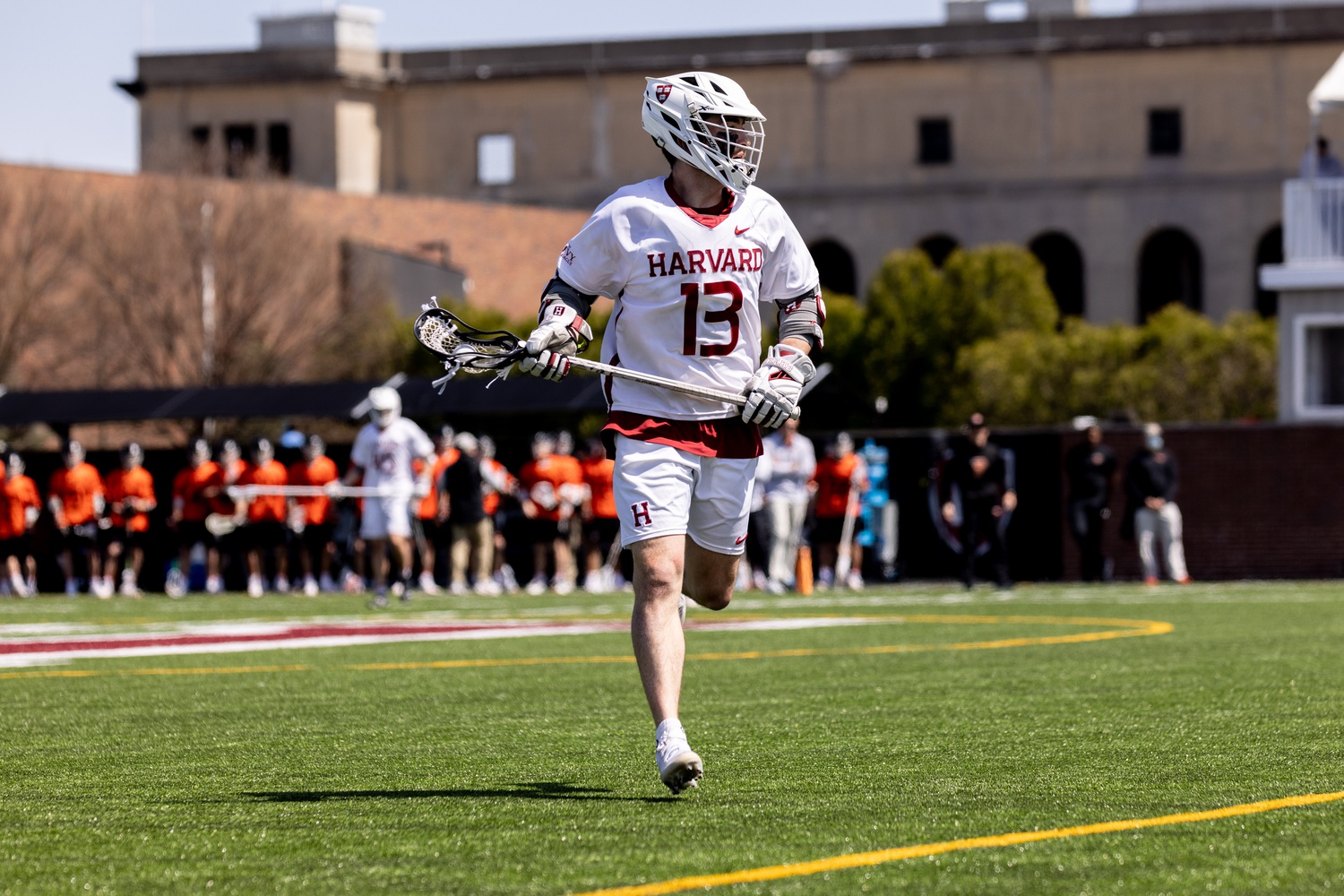 First year attacker/midfielder Owen Gaffney runs up the field during the 19-16 comeback win over Princeton on Saturday. Next weekend, the Crimson, currently in a five-way tie for first, will face Yale in New Haven, Conn. By Dylan J. Goodman

Senior goalie Kyle Mullin had another standout performance, saving 18 shots at a 53% rate, with many of those being diving plays on the doorstep. He also led the clearing attempts, facilitating both outlets down low and long-bombs across midfield. His leadership was needed in turning around the deficit of the second quarter, and some clutch saves by the senior did indeed turn the tide.

Another senior who turned in a strong last game on Jordan was FOGO Steven Cuccurullo, who had one of his best performances of the season, winning 15 of 28 face off takes. His clamping was consistent, and he was able to dish it out to the wings to make big plays in the scrum. Senior FOGO Kyle Massimilian also came in clutch, winning three for eight.
“Really great bounce back for the faceoff unit. Lots of guys stepped up on the wing. [Sophomore LSM Greg Campisi] played great as always and [Cresci] stepped up and made some really good plays in his first game action which was awesome,” Cuccurullo said.

Cuccurullo had chemistry with wings like Campisi and first-year midfielder Andrew O’Berry, who played both ways in the game. Campisi looked strong in the middle of the field, showing off his crafty back-handed passes and one-handed ground balls, along with junior LSM Ollie Hollo, who yardsaled his Princeton midfielder with a beautiful check at the fifty.

“We did really well on ground balls. We started to defend a lot better at one side of the field and offense was getting the looks all day. Everything was kind of just put together today, it was awesome to see,” Campisi stated.

The third quarter was a hard-fought battle, and Harvard was able to claw Princeton’s lead to just one goal, 12-11. The Crimson, cheered on by the 400 raucous alumni who came to celebrate the team, ratcheted up play over the final fifteen minutes to earn a 19-16 victory. When asked about how fans’ presence set the game over the edge, players Campisi, King, Olmert, and head coach Byrne all emphasized that they had a tangible impact on the team’s energy during its second-half comeback.

“There was the intersection of a beautiful day, with 400 alums, honoring our current seniors and past seniors … I think that the calculus of all that makes you bring an extra level of effort and energy,” Byrne commented.

Campisi emphasized this statement, saying: “When you have the crowd packed, you have all the boys over at one end of the field … it gives you a little push on the back, a little extra energy to make all the plays that matter.”

All is left to play for in the team’s final game of the season on Saturday, April 30. The contest against Yale, which will take place at Reese Stadium in New Haven, Conn. at 2 p.m., will help determine Harvard’s playoff fate. The game will be streamed live on ESPNU.

Said Campisi: “We know we can win any game … against anybody, we just need to play our game. We need to do all the little plays that build up to the big plays. It starts with every man on the roster, from the bottom to the top.”