In Up and Down Weekend, Women's Water Polo Claims Narrow Victory Over Princeton and Suffers Narrow Defeat to Michigan 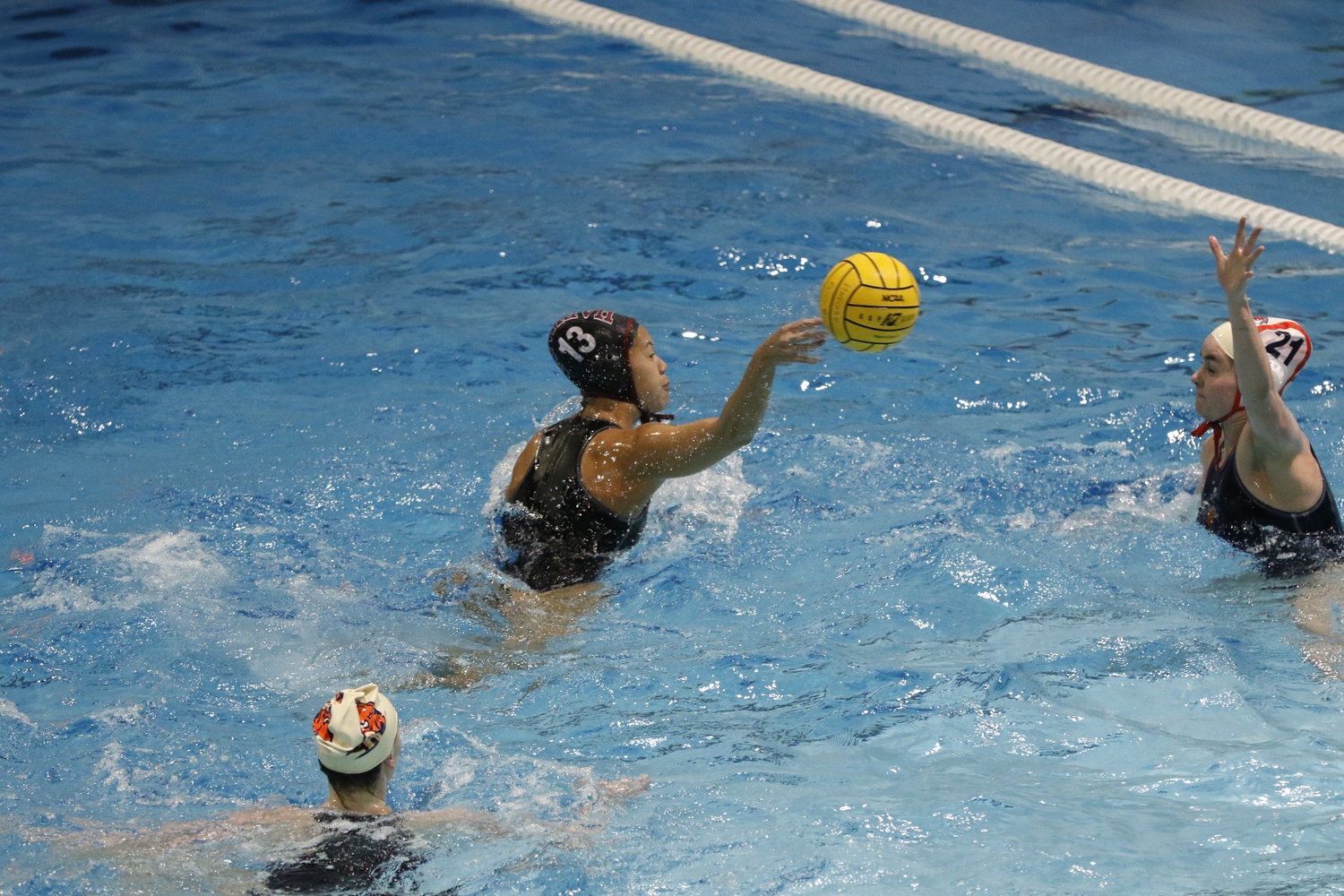 Then-senior attacker Kristen Hong fires a shot in an 8-6 victory over Bucknell on March 3, 2019. This past weekend, the Crimson again won by two goals in the pool, this time over Princeton on Saturday. By Timothy R. O'Meara
By Ever A. Marinelli, Crimson Staff Writer

This past weekend, Harvard women’s water polo competed in an exciting double header against a pair of conference opponents on Saturday, with a narrow two-point loss to No. 7 Michigan and an equally hard-fought two-point victory over No. 19 Princeton.

“[Michigan and Princeton] were definitely our two most anticipated games of the season,” junior goalie Zoe Banks said. “They’re the two teams we’ve been chasing for the longest, so it was really exciting to play two really close games against them.”

The No. 22 Crimson (17-5, 5-2 CWPA) began the day with a 12-10 defeat against the Wolverines (18-8, 6-0 CWPA), which is currently undefeated in conference play. Harvard came out of the gates slowly, conceding two goals in the first two minutes.

“We started off a little slow,” Banks said. “Next time, we know what to expect and we know we have to come out with ten times the amount of energy that we did in the first quarter of that game.”

Despite the difficult start and eventual defeat, both the players and head coach Ted Minnis saw the game as a success. Both emphasized the importance of learning from setbacks while still focusing on the positives and keeping a good attitude.

“Personally, my favorite moment from the whole day was against Michigan,” said senior center defender Inde Halligan. “It was a six-on-five, so we had a power play going, and my teammate [first-year attacker Erin Kim] threw me the most perfect pass that has ever been thrown in water polo, which ended up setting up a really nice shot for me.”

After the Michigan game, the team shifted its focus to its Ivy League rival, Princeton. For double headers, being able to reset mentally and prepare for the second opponent is critical to maintain a high level of play. However, it can be a daunting task.

“I definitely was nervous to have two games in the same day, there’s always the chance of having your mind on the second game and not playing the first game right,” Halligan said. “It’s hard to deal with them separately.”

On Saturday, the Crimson succeeded in moving past the Michigan loss in order to focus all its efforts on the Tigers.

“We are moving on to the next game, [the first] game is finished. There’s nothing to be done about it and there’s no point in thinking too hard about any negatives you might feel,” Banks said. “Stick with the positive energy … take the positive things from the first game and bring them into the next one.”

That positive energy from the Michigan game carried over to Harvard’s showdown with Princeton (17-6, 6-1 CWPA), where the Crimson put away a 10-8 win.

“To play and beat Princeton for the first time with 0-4 [against them] as a program, and do it in their senior game – it was pretty great,” Minnis said.

As it did against the Wolverines, Harvard allowed the Tigers to score the game’s first two goals, but after changing the lines and doing some substituting, the team was able to tie up the game at 2-2. The first quarter ended with a frustrating two-goal run by Princeton, but Harvard picked up significant momentum in the second quarter, as it headed into halftime with a 7-4 edge.

“Our second quarter against Princeton was really great,” Banks said. “It was a 5-0 quarter, so that was really exciting, especially since at the end of the first quarter we were down 4-2.”

Though the Princeton game was undoubtedly a success for the Crimson, the team will continue making adjustments before the second round of conference play. The double round robin format means that Harvard plays each conference opponent twice, giving both teams a chance to strategize and hone their play before the second matchup.

“Especially against Michigan, I did not like our five-on-six defense,” Minnis said. “We gave up a lot of goals to both Princeton and Michigan in that phase of the game … When we’re playing down a woman, that’s when teams are scoring on us.”

Minnis declined to comment on specific strategic changes he’ll be making, but noted that the team is always adjusting and will be spending the coming weeks watching film of its games and preparing to face off against Michigan and Princeton again this coming weekend.

The Princeton win left the Crimson with plenty to build off of. It hopes to carry its momentum over to the four conference games this weekend. After its rematch with Princeton on Saturday at 11 a.m., Harvard will face Bucknell (Saturday, 3 p.m.) and Saint Francis (Sunday, 9 a.m.) before attempting to exact revenge on the Wolverines on Sunday at 12 p.m.

–Staff writer Ever A. Marinelli can be reached at ever.marinelli@thecrimson.com.