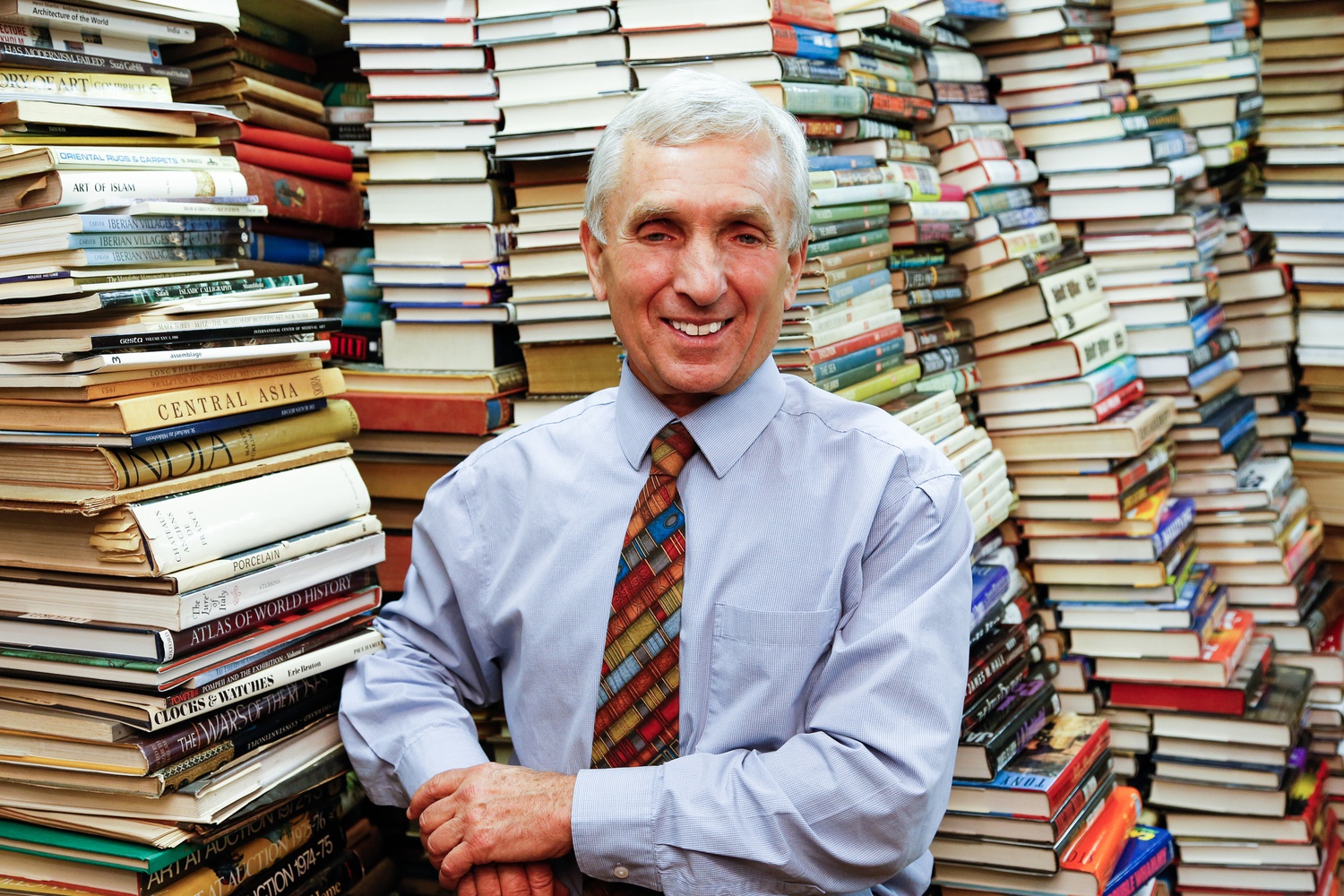 An Antique Bookstore for the 21st Century

The Brattle Book Shop in Boston, full of rare and antique books, is one of America’s oldest and largest used bookstores.
By Susanna B. Freudenheim and Addea Gupta

“I have never looked back,” Kenneth Gloss says as he talks about working at his family’s beloved Brattle Book Shop – one of America’s oldest and largest used bookstores — full of rare and antique books on West St. in Boston.

Gloss’s father acquired the business in 1949, and Gloss himself took it over in the early 1970s. Since then, the business has grown to ​​an extensive collection stretching across three floors and an outside lot, and he has had to adapt to dramatic changes in the bookselling world.

Gloss’s parents bought the already-established Brattle Book Shop, located on Brattle Street at the time, in 1949. Over the years they moved to several different locations, primarily as a result of urban renewal. They relocated to West St. in 1969, but in 1980, a fire burned the entire building down.

“We wanted to keep going, but we basically had almost no insurance,” Gloss says. After finding a place a couple of stores from their original location on West St., they slowly rebuilt themselves. “People either donated or sold us books. The mayor of Boston, Kevin H. White at the time, came down with a carload of books.”

Gloss started working at the Brattle Book Shop when he was in third grade, fueled by his father’s love of books. He went to houses with his father to purchase books for the store, helped him carry them back, and cleaned up at the bookstore. “I think my father just wanted me there,” he says.

However, Gloss had not imagined that his life would follow this trajectory. He studied chemistry during his time as an undergraduate at the University of Massachusetts Amherst. He was on his way to get his doctoral degree at the University of Wisconsin when his father fell ill, and Gloss had to take a year off before graduate school.

“That year off now has been almost 50 years,” he says.

But Gloss has never regretted his change of career. The bookstore and the work he has to do for it is a source of constant excitement for him. He describes the experience of going to estates to buy books as being “... like Jim Hopkins on Treasure Island everyday, not knowing who you’re gonna meet, what you’re gonna see, the people, the places, the characters.” He states that he has “hundreds and hundreds of stories” as a result of these visits and watching customers in the bookstore. Sometimes these are new customers, but there are also customers who return again and again: “We had one customer who calls in sick when he’s not going to come in!”

Beyond enjoying his relationships with customers, Gloss recognizes that “it’s a business, and you’ve got to do the business part of it.” This aspect constitutes more of a focus for him than it did for his father, whom Gloss describes as less “orderly” and “organized” than he is. Still, his father did teach him the importance of owning their own property as opposed to renting a space. He cites freedom from unstable rent prices as “one of the reasons that [the Brattle Book Shop] can be here” today.

Rent is not the only aspect to have changed since Gloss’s father began running the business. With the rise of retailers like Amazon — which controls at least 50 percent of the American market for print books — small bookstores today certainly face a more difficult task of attracting customers than they used to. In the face of these changes, Gloss adopts a pragmatic approach. He understands that the presence of so much information freely available online is “fabulous for the world” and argues that as a bookshop owner “you just have to adjust.”

Gloss himself has adjusted with fervor. Finding novel ways to bring attention to the bookstore, building on his father’s approach, is another reason Gloss believes the bookshop has been able to last so long. He has recorded over 100 episodes for his podcast, brattlecast, appeared on PBS’s Antiques Roadshow for the last 20 years, and frequently lectures and does radio interviews. Moreover, the Brattle Book Shop’s outside lot is now, Gloss states, “one of the most Instagrammable sites in Boston.” 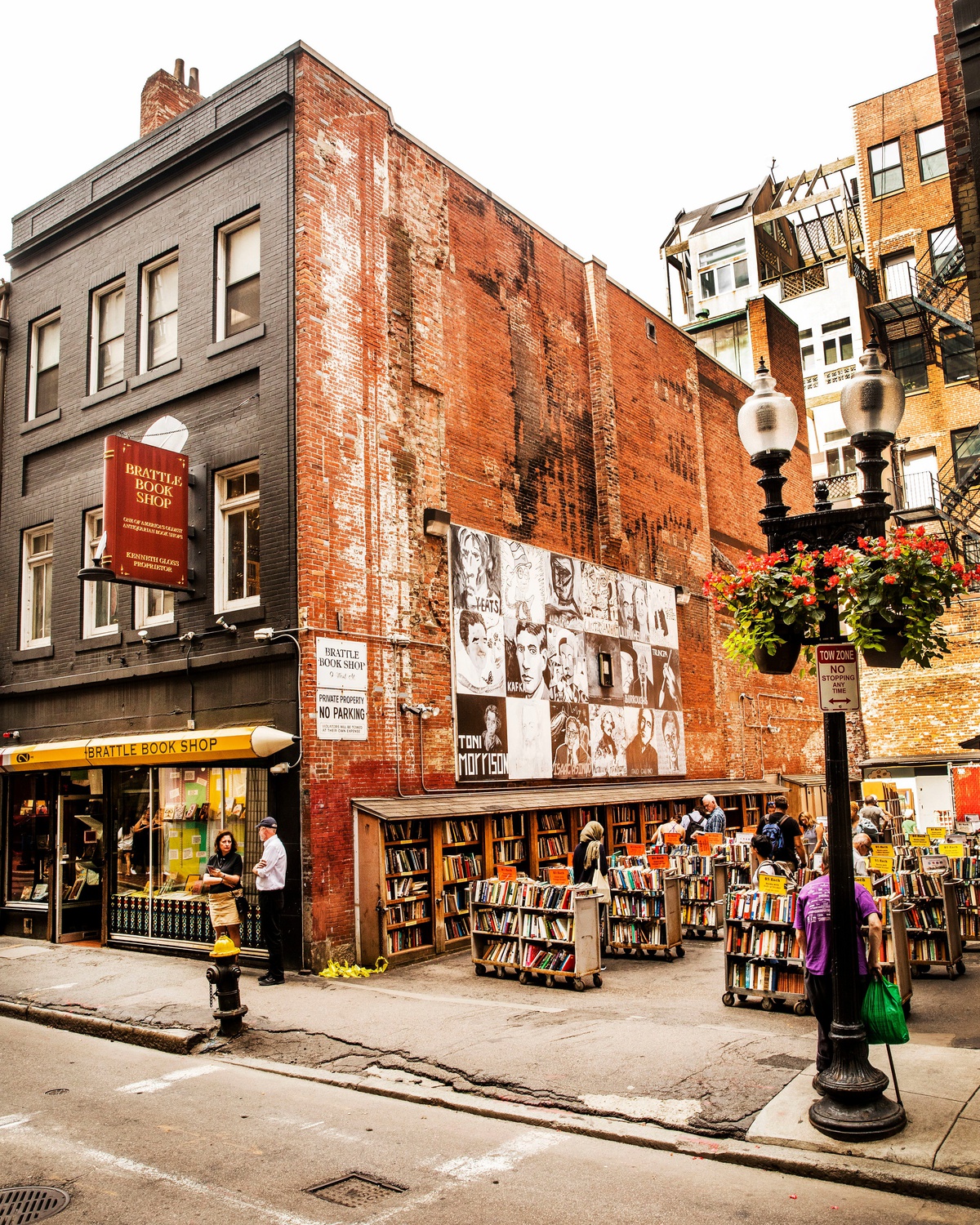 The Brattle Book Shop may be filled with antique books, but its exterior is "one of the most Instagrammable sites in Boston," says Gloss. By Courtesy of Alex Gagne

Gloss credits this publicity strategy with his ability to gain increased access to highly valuable texts. People “have to know of us to call us,” he says.

He describes one time when he went to do a book appraisal north of Austin, Texas in a “little ranch house, nothing great”. On the kitchen table was Jack Kerouac’s actual manuscript of On the Road. He’s also held Isaac Newton’s Principia Mathematica with Newton’s original marginal notes

Yet it turns out that Gloss’s “most precious book” is a normal, non-rare copy of The Night Before Christmas. “It is the copy that I have read to my daughters every Christmas Eve since they were born,” he says. “I now read the same copy to my grandchildren.”