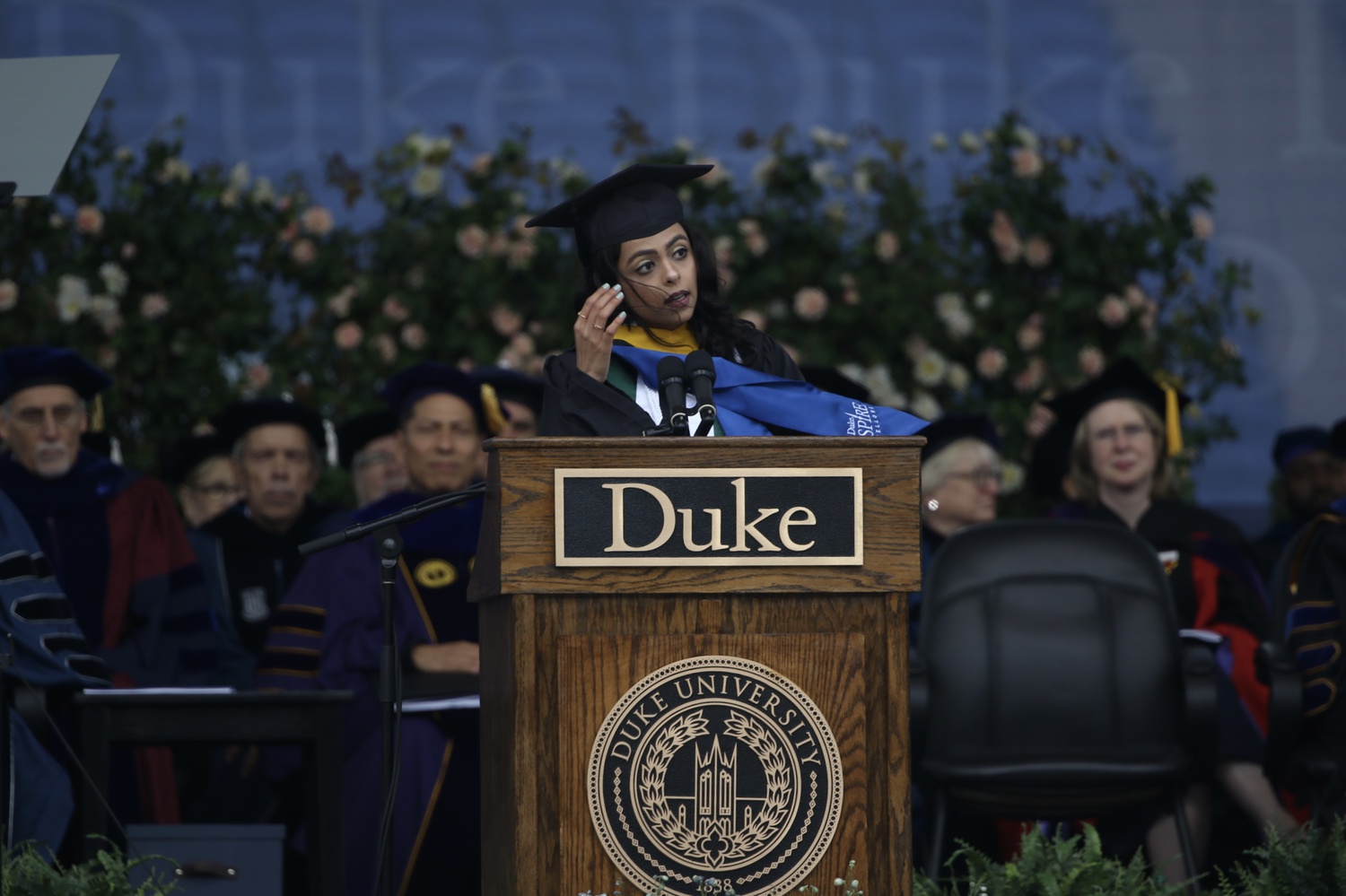 Duke University’s 2022 undergraduate commencement speaker, Priya Parkash, told her classmates to pursue their own individual “revolutions” at the school’s graduation ceremony on Sunday, reflecting on how the university could be its own “Duke nation.”

If an attendee of the ceremony had a relative in Harvard’s Class of 2014, the message may have rung a bell.

Parkash’s speech appears to have been plagiarized from a 2014 student commencement address at Harvard delivered by Sarah F. Abushaar ’14. The central themes of the two speeches were indistinguishable, and significant portions of the language were nearly identical.

The Duke Chronicle, the school’s independent student newspaper, first reported the similarities between the two speeches on Monday.

In Abushaar’s 2014 speech at Harvard, titled “The Harvard Spring,” she described a revelation she had during her time in college after growing up in Kuwait.

“If Harvard shut its gates, it could be its own country,” she recalled someone telling her, leading her to view the school as “the Harvard Nation.”

On Sunday, Parkash, who is Pakistani, told a crowd at Duke’s Wallace Wade Stadium that she had a similar realization during her time in college.

“She soon came to realize that if Duke were to dig a moat around its perimeter and fill that with water, it could be its own tiny island nation, like Cuba or maybe even Sri Lanka,” Parkash said, referring to herself in the third person. A name she coined for the imaginary country: “the Duke nation.”

In a statement sent Tuesday via a public relations firm, Parkash acknowledged the similarities between her speech and the 2014 Harvard address.

“When I was asked to give the commencement speech, I was thrilled by such an honor and I sought advice from respected friends and family about topics I might address,” Parkash wrote. “I was embarrassed and confused to find out too late that some of the suggested passages were taken from a recent commencement speech at another university. I take full responsibility for this oversight and I regret if this incident has in any way distracted from the accomplishments of the Duke class of 2022.”

To apply to deliver a commencement address, Duke students were required to submit a 250-word “speech outline” in March, according to a notice posted in February by the school. A selection committee picked finalists, who were subsequently asked to deliver a full draft.

Abushaar’s Harvard speech came on the heels of the Arab Spring, a series of pro-democracy uprisings that took place in the Middle East and North Africa between 2010 and 2013.

In a statement to The Crimson on Tuesday night, Abushaar wrote that she hopes the incident can be a learning opportunity for Parkash.

“The goal of my address was to inspire young people, and especially young women, from all backgrounds to break barriers in striving for their aims and to have the courage to use their voices to share their stories and serve as forces of good,” she wrote. “I hope that this incident was a serious error in judgment and that the student can take this opportunity to learn and grow from it.”

Throughout the speech, Parkash used language and rhetoric that appears to have been pulled directly from Abushaar’s 2014 remarks at Harvard.

In Abushaar’s “Harvard Nation,” the iconic John Harvard Statue was the Statue of Liberty. The Harvard Alumni Association was its tax collection agency. The University’s endowment, Abushaar quipped during the address, was larger than the gross domestic product of more than half the world’s countries.

Parkash’s description of the “Duke nation” was strikingly similar: She compared the James Buchanan Duke Statue — which sits in front of the school’s chapel — to Christ the Redeemer in Brazil. The tax collection agency, she said, was the Duke Alumni Association. And she noted that Duke’s $12.7 billion endowment is larger than the GDP of one-third of the world’s countries.

Both speakers referred to “diplomatic passports” from their schools that helped them get through U.S. immigration.

“I made sure I dressed like our overly proud Harvard dads, with Harvard hat, Harvard shirt, Harvard shorts, and Harvard underwear,” Abushaar said in 2014.

After dressing in college gear, each speaker said they were no longer seen as a “national security threat.” Once making it past immigration, “suddenly all the gates to the American Dream opened wide,” Abushaar said in 2014. For Parkash, “the doors to this whole new world of possibilities flung wide open.”

The similarities did not end there.

“Over the past four years, the skin of our feet collecting a world of experiences, we each become this place in a strange way, each of us picking up bits of people and history and ideas that changed the way we saw the world,” Abushaar continued in her 2014 speech, which has garnered 3.8 million views on YouTube.

“Over the last four years, as the sole of our shoes have collected a world of experiences, we all have become this place in rather perplexing ways, each one of us internalizing pieces of people, perspectives, and the past, all of which have transformed our outlook on the world,” Parkash said.

On Sunday, Parkash said: “Soon the overtly visible, the concrete institutions, melted into the background and the unseen wiring that holds our school together began to scream out loud.”

The “invisible institutions” Abushaar described in 2014 included the “quarreling columns of The Crimson” and their “potency to propel policy changes.” Parkash pointed to the “dissenting opinion pieces of the Duke Chronicle, ripe with the potency to make you rethink your beliefs.”

Parkash said her “cluttered inbox” was “a testament to the beating heart of my Duke citizens” — similar to the way in which Abushaar said she saw “a heartbeat of civic community’s vivacity” in Harvard’s “cluttered bulletin boards” eight years earlier.

The transcript of Parkash’s speech was taken down from the website of Duke Today, a publication run by the school, on Tuesday.

Duke spokesperson Michael J. Schoenfeld wrote in a statement that the university has “initiated a process to understand the facts of the situation.”

“We are aware of and concerned about these allegations,” Schoenfeld wrote.

“Duke University expects all students to abide by their commitment to the Duke Community Standard in everything they do as students,” he added.