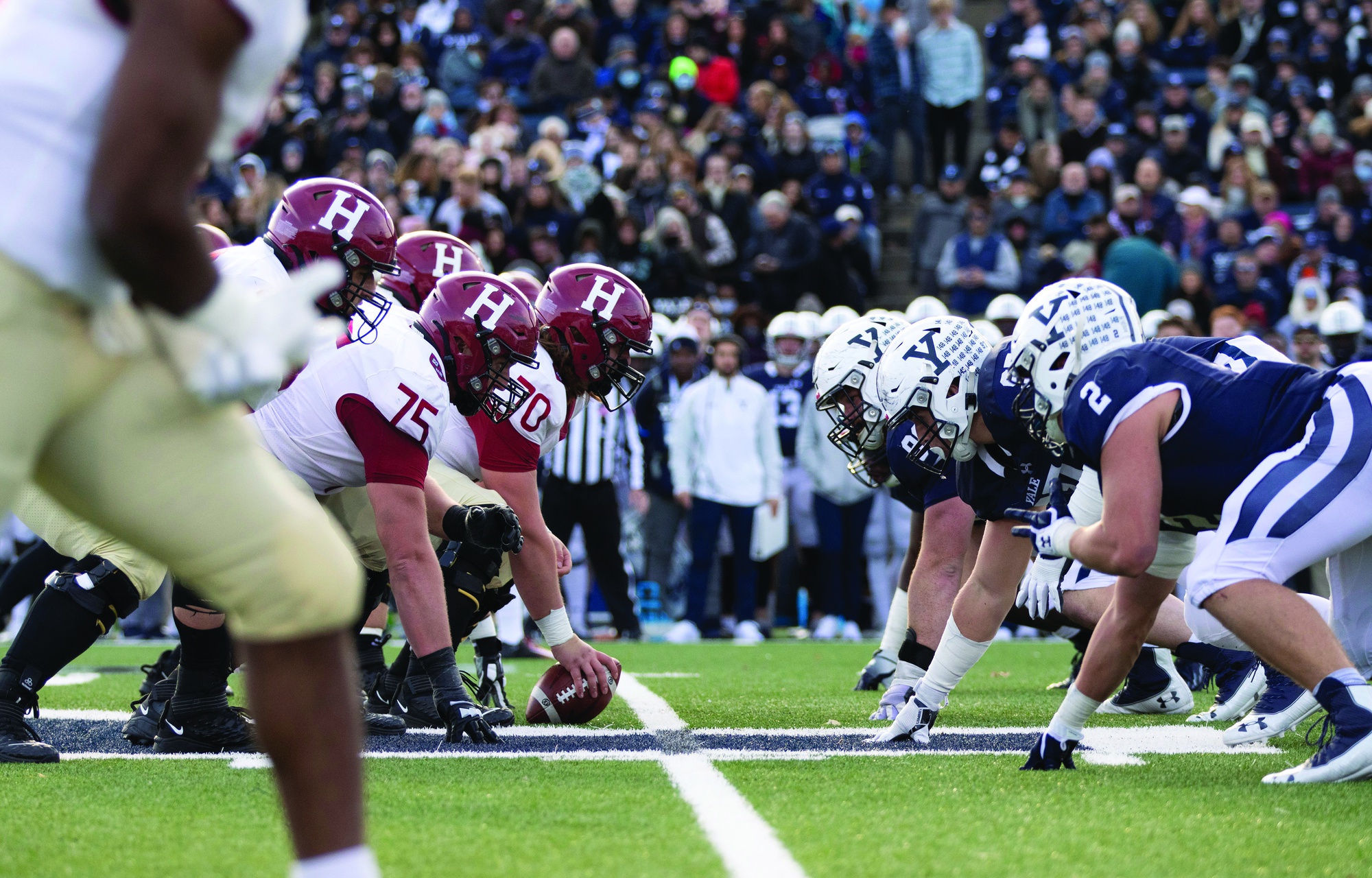 A Fade Not Forgotten: Football v. Yale, Game of the Year

The ball was in the air for what felt like 30 seconds to Harvard junior quarterback Luke Emge. As Emge’s 3rd and 10 fade to the back left corner of the end zone at the Yale Bowl descended towards a leaping junior wide receiver Kym Wimberly, much hung in the balance. There were 22 seconds left in the 137th rendition of The Game, with Yale clinging to a 68-60-8 series edge and a 31-27 lead in the contest. 49,500 fans, half clad in crimson and the other half in navy blue, had descended upon New Haven, Conn., from all around the country.

For head coach Tim Murphy, a catch would mean his 20th victory in 28 tries against the Crimson’s archrivals. If it scored a touchdown, the team would finish with an 8-2 record, its best performance since 2015, when it went 9-1 to claim the Ivy League title. But if the football fell to the turf, Harvard would have to reset and go back to the line of scrimmage to draw up another play — on fourth down. A failure to score on that play would send throngs of Harvard fans returning to Cambridge in disappointment. Revenge would not be exacted for Yale’s 50-43 double overtime victory in 2019 at the same venue.

But Emge never let himself entertain the possibility of failure.

“I threw the ball having confidence he would come down with it,” he said of Wimberly.

Emge had reason to be confident. All season, the six-foot Wimberly had made play after play, hauling in 34 passes for 453 yards and four touchdowns to end the year as Harvard’s leading receiver. None was bigger than the twisting catch he made over the top of Bulldogs defensive backs Wande Owens and Dathan Hickey that Saturday.

As the Slidell, La., native came down in the back of the end zone, with Hickey crashing down on top of him, tens of thousands of Harvard fans screamed in exaltation. After a 60 minute back-and-forth battle that saw neither team hold more than a 10-point lead, the Crimson stood on the doorstep of victory.

“Initially, I couldn’t believe myself when I saw him make that catch,” said junior kicker Jonah Lipel, an All-Ivy First Team selection whose pair of first-half field goals were critical in helping Harvard to victory. “It was so filthy, right over the top of that defender.” 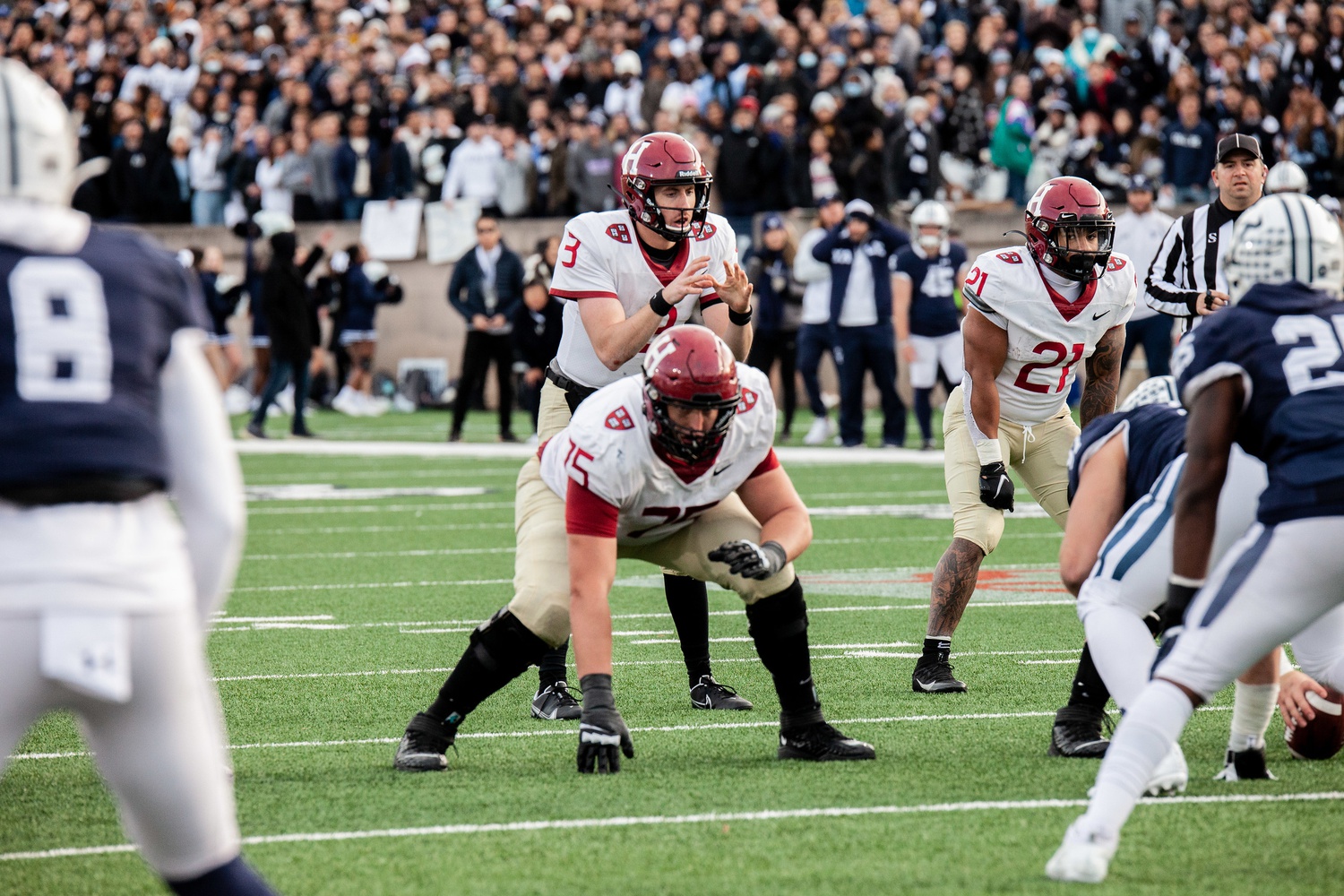 Junior quarterback Luke Emge readies for the snap in Harvard's 34-31 victory over Yale on Nov. 20, 2021. By Dylan J. Goodman

The win didn’t come easily for the Crimson, which had scored on five of its nine opening drives prior to the Yale contest. Instead, it got off to about the slowest possible start, with three false start penalties in the first four plays. Then, Harvard’s fifth-ranked defense allowed its opponent to score on its opening drive for the first time all season, as Bulldogs sophomore quarterback Nolan Grooms found senior wide receiver Darrion Carrington for a 17-yard score to give Yale a 7-0 lead. On the next possession, Emge was strip-sacked by junior defensive lineman Reid Nickerson deep in the Bulldogs’ red zone.

“It was crazy,” Wimberly recalled. “We [couldn’t] really hear. They were doing some weird snap counts. That is one of the few moments of the game that stuck out. To start off the game with three false starts is kind of like, ‘Man, we’ve gotta get going, boys.’ … It turned out pretty well.”

“Pretty well” would prove to be a modest way of describing the rest of the game, which turned out to be one of the most dramatic clashes in the 137-year history of the rivalry. The contest featured three lead changes, a blocked punt returned for a touchdown — the Crimson’s first since Oct. 5, 2019 against Howard — and saw Lipel set the program record for most field goals in a single season. He broke it on his first of two 47-yarders, which cut the deficit to 7-3 late in the first quarter. The 47 yards also marked his career long. He later smashed one through the uprights from the same distance on the opposite end of the field to give Harvard a 13-10 lead in the second quarter.

“As a kicker, I really just [have to] do my job when I’m called upon, no matter the situation,” Lipel said. “That warmup for Yale was probably one of the best warmups I’d had all season, my pregame, and I just felt amazing, and so walking up to both of those kicks I knew I was going to make them.”

The arc of the game largely mirrored the Crimson’s season: Harvard came out the gates firing, trouncing Georgetown, 44-9, in its opening appearance. It then maintained its hot form all the way up to an Oct. 23 clash at Princeton, when a timeout was granted to Tigers head coach Bob Surace after Wimberly had found the end zone, improperly negating what would have been the game-winning score in triple overtime (the Ivy League later acknowledged the officiating error). It fell in quintuple overtime and went on to lose to Dartmouth the following week at home.

Similarly, at the Yale Bowl, Lipel’s field goals and the measured play of Emge, junior running back Aaron Shampklin, and the Harvard defense helped the Crimson outpace its nemesis for most of the game. After Murphy’s squad gained the lead for the first time with 37 seconds left in the first quarter, Yale would not lead again until seven minutes, 48 seconds were left on the clock. Harvard was buoyed by unlikely heroes, like sophomore linebacker Kobe Joseph, a converted tight end who returned junior safety James Herring’s second blocked punt of the season for 35 yards and a wild score to extend the team’s edge to 20-10.

The Crimson’s lead did not last, however, as the Bulldogs, led by Grooms and junior running back Spencer Alston, systematically dissected the Crimson defense. Grooms and Alston consistently stepped up, with the signal-caller launching a 30-yard touchdown pass just before halftime that cut into the Harvard lead and the running back finding a hole up the middle of the field on a third-and-18 play early in the fourth quarter, keeping alive a drive that would ultimately result in the Bulldogs’ go-ahead score. The Crimson’s mid-game struggles were emblematic of its consecutive heartbreaking losses to the eventual Ivy League co-champions in late October.

“What resonates for me was the extreme and somewhat unlikely shifts in the game,” Murphy wrote in an email. “It was very exciting and unpredictable for the fans, coaches and TV audience.”

When Yale head coach Tony Reno, staked to a four-point lead, opted to punt on 4th and 1 from his own 35-yard line with just under three minutes remaining in the game, it seemed as if Harvard had one drive to produce a game-winning score. Thus, when Emge’s 4th and 6 pass to Wimberly was broken up, Harvard fans appeared visibly deflated. Seemingly the only people at the Yale Bowl not convinced of the hosts’ impending victory were Murphy and his team. 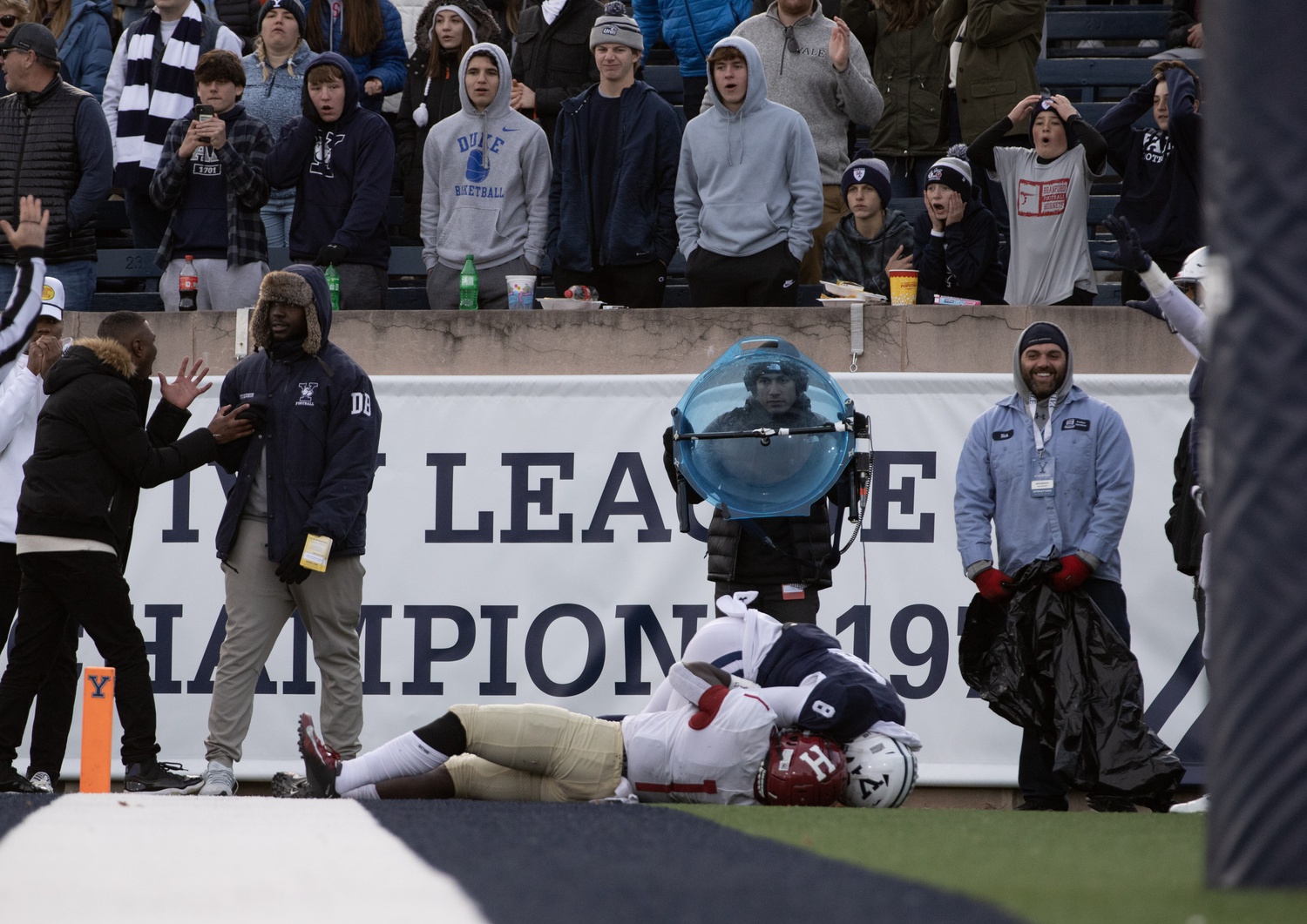 Junior wide receiver Kym Wimberly lies in the back of the end zone after making a 12-yard touchdown reception to secure the Crimson's 34-31 victory over Yale on Nov. 20, 2021. By Angela Dela Cruz

“Having been part of 28 [Harvard-Yale] games, you expect the unexpected,” wrote Murphy, the winningest head coach in Ivy League history. “Having been fortunate to have been part of 19 out of 27 Harvard-Yale victories, I never, ever feel like we are not going to win it.”

“Coming off the field, I remember [assistant head coach Joel Lamb ’93] just saying to me, ‘Hey, keep your helmet on, our defense is going to get a stop, we’re going to get the ball back,’” Emge added.

After three short rushes by Alston and Grooms, Reno was faced with a 4th and 8 from Harvard’s 34-yard line. Instead of punting, Reno opted to let Grooms attempt a hero play to ice Yale’s win. But amid suffocating pressure from Harvard’s front seven, the southpaw was forced to throw it away. The Crimson was left with just 59 seconds — and no timeouts — to orchestrate a 66-yard drive.

Weeks of practice had helped Harvard prepare for the moment.

“We are constantly running two-minute drills, repping it in practice, knowing what to do in the situation,” Emge said.

Of course, a season in which the Crimson rallied from defeats to the Tigers and the Big Green to conclude with victories in each of its final three games had to end on a comeback. In its final drive, as it had all season, Harvard received contributions from the top and bottom of its roster. It was Wimberly who made the catch on the third and 12. But a similarly valuable play was made by two less heralded players: sophomore safety Jelani Machen and first-year safety Garrett Sharp combined to tackle Pantelis on the ensuing return.

And, as the remaining seconds ticked off the clock, Harvard came together as a unified team — as a unified school — with the stands emptying to admit tens of thousands of fans onto the field. It marked a fitting culmination of not just a trying game but of a trying few years for the Crimson, which saw the 2020 season canceled due to Covid-19.

Amid the chaos stood Wimberly, looking for his parents. But instead of falling into their arms in exhilaration, the star wide receiver found his coach. 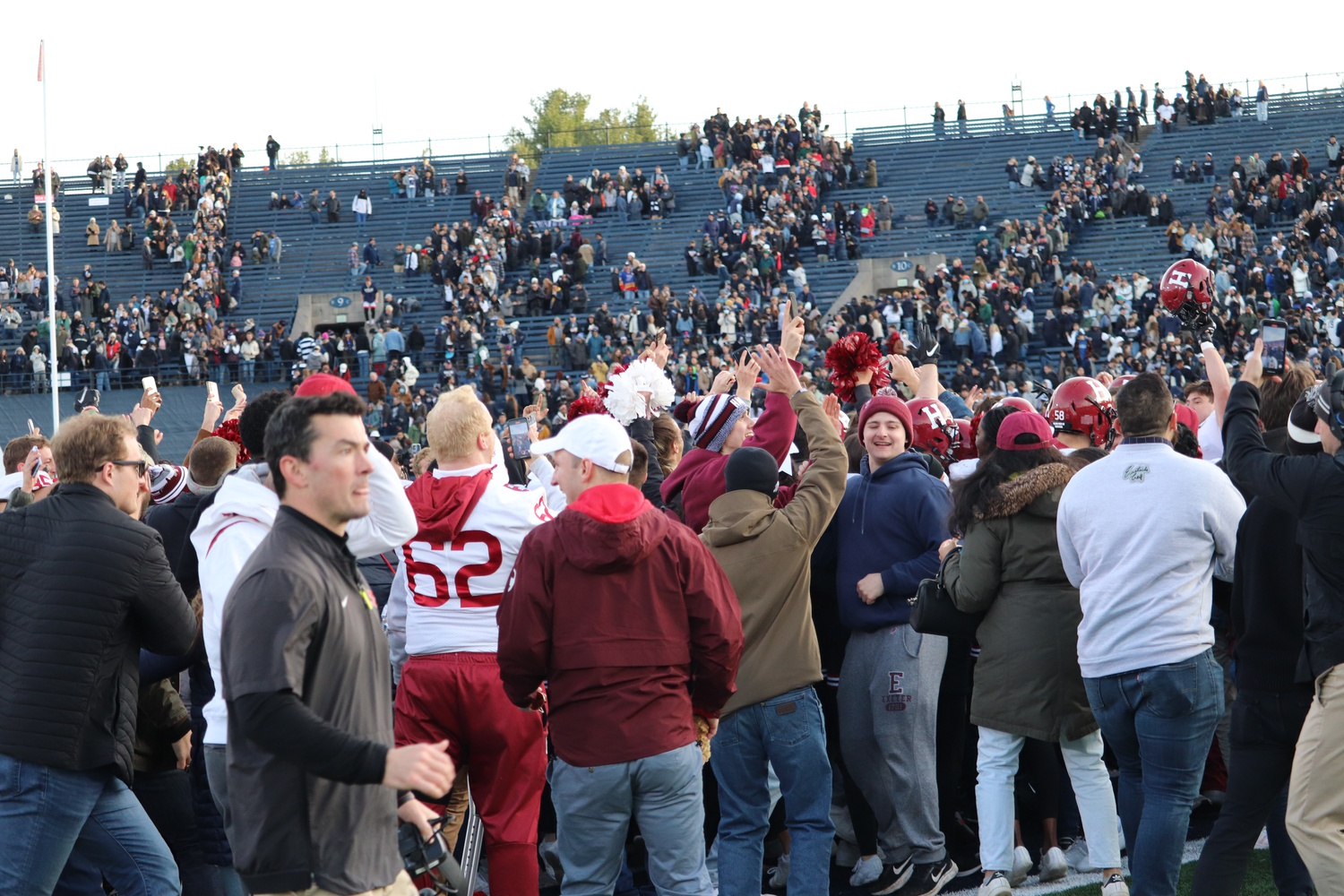 Harvard fans and players spill onto the field at the Yale Bowl after the Crimson's 34-31 victory in the 137th edition of The Game on Nov. 20, 2021. By Truong L. Nguyen

“I was looking for my mom and dad, and I remember standing on the bleacher, and then the first person I saw … was [Murphy],” Wimberly said. “I hopped off the bench and literally gave [Murphy] the biggest hug ever. I literally had him in the air.”

While it was Emge’s perfect pass and Wimberly’s tough catch that delivered a victory for the Crimson, none of it would have been possible without Murphy’s leadership. The wide receiver lifting his head coach in the air, screaming in jubilation as Harvard students surrounded the pair on the field, seems to perfectly encapsulate the most recent installment of a legendary rivalry.

In a capstone to its successful season, a battle-worn team, held together through unfailing trust, put the finishing touches on an instant classic. The 34-31 comeback victory over Yale will not soon be forgotten in Cambridge, thanks in large part to one wide receiver and his head coach, who, with an entire school rallying behind them, helped produce the most unlikely drive in one of the most unlikely seasons in Harvard football history.