Stakeholders throughout higher education — and Harvard itself — are split on the role that standardized tests like the SAT and GRE should play in admissions. 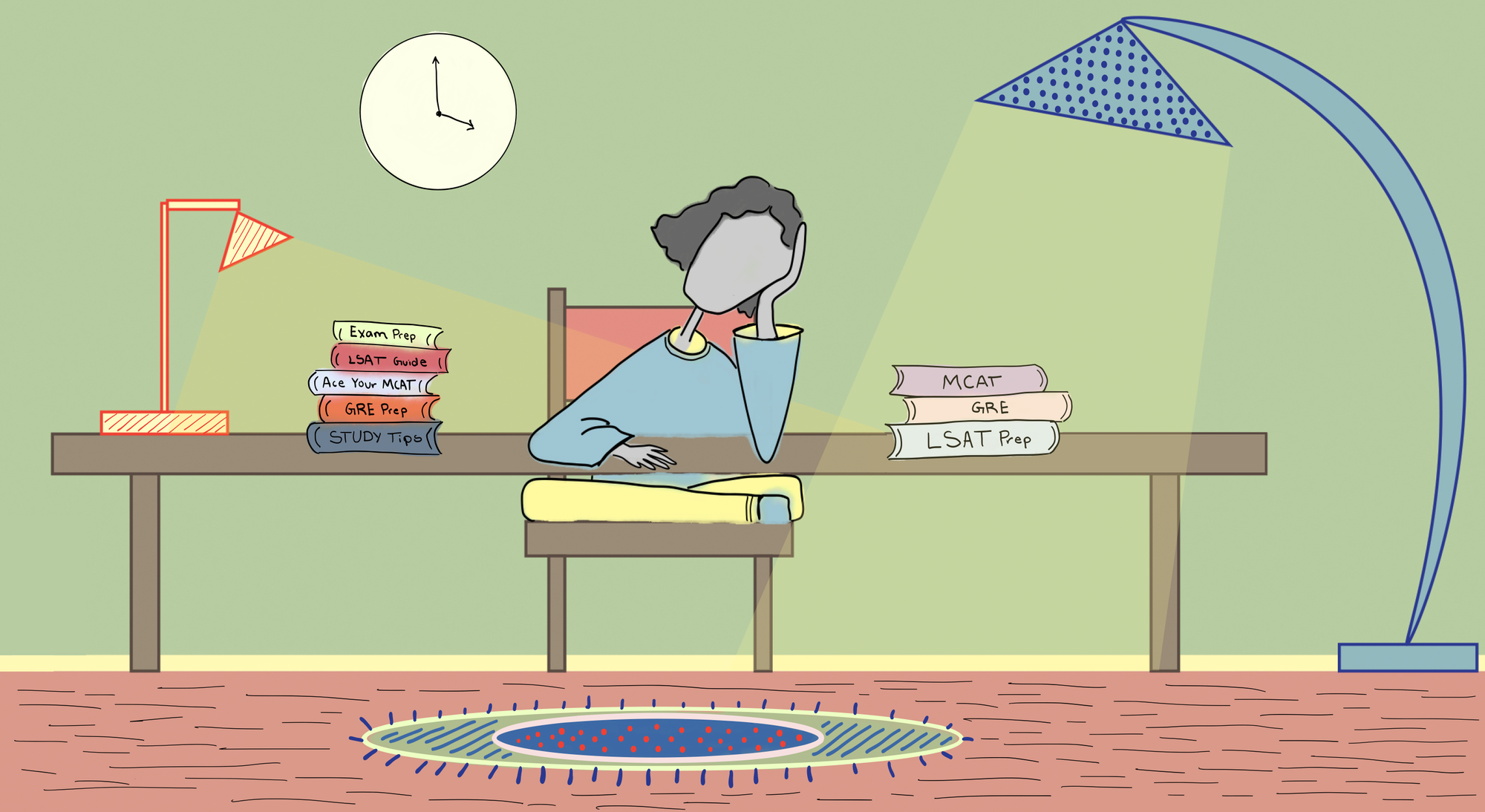 Stakeholders throughout higher education — and Harvard itself — are split on the role that standardized tests like the SAT and GRE should play in admissions.
By Alexander I. Fung, Paton D. Roberts, and Eric Yan

In 2019, a high school student checking off the list of requirements for their college application may have needed to sharpen their number two pencils in preparation for the SAT.

Harvard — alongside many of its peer institutions — lifted its undergraduate testing requirements for the duration of the pandemic, and the College announced last December that it will extend its test-optional policy for at least the next four years.

At Harvard’s Graduate School of Arts and Sciences, just 24 of 76 degree programs required applicants in 2021 to submit scores for the GRE — the standardized test that has historically been required by graduate schools.

Many programs within the University’s other graduate schools — including the Harvard Divinity School, Harvard Graduate School of Education, and the Harvard School of Public Health — have also removed their GRE requirement for the upcoming application cycle.

As graduate schools ponder the future of standardized testing in their admissions process, some students, administrators, and higher education experts argue that testing requirements impose financial and logistical hurdles that limit the diversity of applicant pools.

“It’s been proven that relaxing the test requirement removes a barrier [and] increases applications from underrepresented students, and that’s a good thing,” Jay Rosner, an admissions test expert, said. “What remains to be seen is things like how long test-optional lasts — how long test-free lasts.”

At GSAS, the shift away from standardized testing began when the school removed its GRE general exam requirement in the spring of 2017.

GSAS spokesperson Ann Hall wrote in an email that the school made the change following an inquiry from the Astronomy department “about the validity of the GRE General Test as a tool for measuring PhD student success.”

The decision allowed each department to decide whether it would require or allow applicants to submit GRE scores. Previously, applicants to any degree program were required to submit GRE general exam scores, while subject test requirements varied by program.

The Astronomy department subsequently lifted its testing requirement, becoming the first Harvard department to do so. Since the 2018-2019 admissions cycle, the department has not accepted GRE general exam scores.

David B. Charbonneau, who serves as the department’s chair of admissions, said concerns about the high cost of the exam and the ability of international applicants to access tests played a role in the decision to eliminate the requirement.

“If you know only someone’s test score, the thing you can best predict actually is their race and gender,” he said. “Since we can just ask people about that without charging them any money, we thought there was no need to do that.”

Charbonneau added that following the decision, the department saw a “statistically significant” increase in applications from underrepresented minority students in the United States, as well as female international students.

Some GSAS faculty involved in graduate admissions for their departments similarly said they believe the information they garner from GRE scores can be determined from other components of the application.

David F. Elmer, department chair for the Classics department, said the writing sample required by his department gives him “much more confidence” in a candidate’s analytical and writing skills than the GRE. The submission of GRE general scores will be optional for Classics Ph.D. applicants for the first time this fall, in what Elmer described as a “trial” run.

“We’re going to see how it goes, evaluating these applications just on the basis of other components,” Elmer said. “They require a lot more care and consideration, but in some ways, they’re also a richer dataset.”

John A. Girash, director of graduate education at the School of Engineering and Applied Sciences, said undergraduate transcripts reveal “much more fine-grained information” about an applicant.

“The transcript tells us exactly what courses the applicant took and their grades,” Girash said. “The GRE doesn’t tell us that — if they get a low score, it tells us there’s something that they're missing, but it doesn’t tell us what.”

Since the Astronomy department led the shift away from standardized testing for Harvard’s graduate programs, several schools across the University have followed suit.

Currently, Harvard’s School of Public Health, School of Engineering and Applied Sciences, and Divinity School all do not require standardized test scores in applications to some master’s or Ph.D. programs. The GRE is optional for the HGSE’s master’s programs, but required for Ph.D. applicants.

Other schools at Harvard have moved to test-optional temporarily in light of the pandemic or have adopted varying standardized test policies by program.

The Rise of ‘GRExit’

As early as 2016, graduate programs nationwide began dropping GRE requirements, with the life sciences at the forefront of the movement. According to an analysis conducted by Science Magazine, 44 percent of molecular biology Ph.D. programs and approximately one-third of neuroscience and ecology programs stopped requiring GRE scores by 2018.

As part of a coalition nicknamed “GRExit,” scores of graduate students, activists, and professors from across the U.S. are pushing to eliminate GRE requirements.

Rosner pointed out that the willingness of several prestigious schools to forgo standardized tests has boosted public confidence in test-optional application processes.

“Moving away from the test implies to some people — wrongfully — that you’re lowering standards,” he said of common misgivings. “Now to make that argument, today, one is going to have to say that UCLA and Berkeley and Caltech are lowering standards by not requiring the test.”

University of Southern California Rossier School of Education professor Julie R. Posselt criticized the use of standardized tests, noting that the social identities of test-takers — and related stereotypes — can impact test performance.

“People earn significantly different scores based on whether the proctor of the exam is of the same social identity that they are as a test taker,” Posselt said.

She added that other considerations, such as grade point average, do not result in disparities across genders and racial groups. GPA is “more predictive of student success in the long-term than are GRE scores,” she added.

Mayank D. Kumar, an HDS student who was not required to submit scores, cited both test anxiety and Covid-19 as reasons for avoiding the GRE.

“A lot of people have issues with the cultural references — things like that — that are in the reading [and] writing sections that make it hard for people to do well,” he said. “But that doesn’t necessarily mean that they don’t have the competency to read and write well and think critically.”

Despite the growing popularity of test-optional admissions, many schools have yet to make the switch. For Harvard Law School, accreditation remains the deciding factor in setting its testing requirements.

Harvard Law School moved to allow applicants to submit either the GRE or LSAT in 2017, following a 2016 study that demonstrated the two tests equally predicted academic performance at HLS.

Christopher F. Chabris ’88, a cognitive psychologist at Geisinger Health System, said he believes standardized testing allows admissions officers to find applicants whose scores make them “stand out” from their background, such as high school students who live in poor school districts but perform well on exams.

“On one hand, I know that they are not necessarily the best measures of a student’s ability to be successful in college,” she said. “But at the same time, data in education is really important for us to be able to measure if our systems are equitable, or they’re improving, or if they’re helping students achieve the outcomes that we want them to achieve.”

‘Can We Make It More Equitable?’

As schools grapple with the question of whether to eliminate or continue requiring standardized tests, higher education experts stress the importance of crafting application processes that promote equity in access to graduate education.

Joshua S. Wyner, the executive director of the Aspen Institute’s College Excellence Program, which aims to improve student outcomes, argued that calls for equitable access to education need to extend beyond the undergraduate level.

“If it takes a graduate degree to get into certain professions — and we know it does — then we need to focus on equity in graduate education, but we tend to stop with undergraduate degrees,” Wyner said.

Stella M. Flores, a professor at the University of Texas at Austin, said higher education institutions should focus on finding a better alternative to current tests rather than eliminating testing altogether.

“Getting rid of one doesn’t mean another one won’t come in its place,” she said. “If there’s going to be another form of assessment, can we make it more equitable?”

Wyner similarly called for schools to consider how they might use standardized tests to further goals of diversity, dismissing the idea that anti-test movements such as GRExit will provide a panacea to issues of accessibility.

“Standardized tests are a tool that can be used for good but also used for discrimination,” he said. “We act as though they’re inherently good or bad, when in fact, they are a tool and the question is, ‘What are you trying to accomplish with them?’”

“I worry quite a bit that we believe that if we eliminate a tool or use a tool, that it will get us all the way there,” Wyner added. “And the answer is it won’t.”