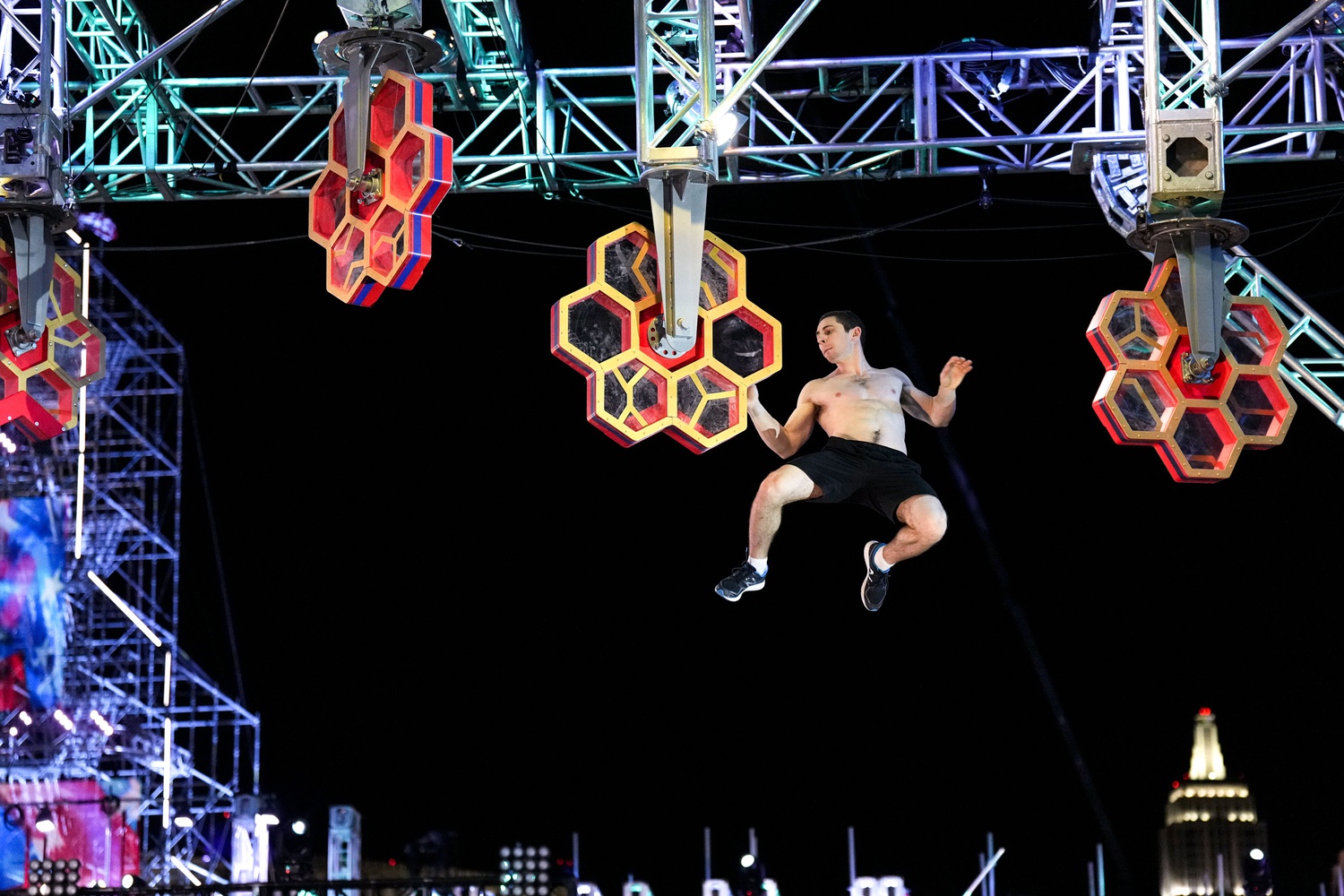 Levin leaps from one handhold to another on the Beehive obstacle. By Courtesy of NBC Universal Media
Advertisement
Advertisement

Levin finally made it onto the eighth season of American Ninja Warrior in 2016 and was named Rookie of the Year. He returned again in 2017 and 2018, each time making it to national finals. This year, for season 14, Levin returned to the American Ninja Warrior stage for the first time since 2018, falling just short of the $1 million dollar prize.
By Claire Yuan

Josh C. Levin, a recent graduate of Harvard’s Graduate School of Education and a professional rock climber, walks into the Boston Bouldering Project with an orange-striped skateboard and a Harvard Basketball shirt.

Dropping off his bag and skateboard by the bouldering wall, Levin looks around for a quiet spot to talk before we climb.

Levin is popular among the climbers, and a friend catches him almost immediately to say hi. Another introduces Levin to a few novice friends as the best climber in the gym.

For Levin, climbing has always been in his blood.

“My parents would tell you all sorts of horror stories about trying to find Josh as a young child and not really knowing where I was, but then looking up into a tree like, ‘Ah, that’s where he went,’” he says.

When Levin was four years old, his parents decided to find a constructive outlet for his boundless energy. So, they signed him up for rock climbing classes at a nearby gym.

“From that point on, I just fell in love with movement-based activities,” he says. From martial arts to flying trapeze to, most recently, skateboarding and waterskiing, he’s tried them all.

Despite his natural affinity for climbing, Levin was a shy child who disliked group lessons so much he nearly quit the sport. Nonetheless, his head instructor, Stacey Collver, saw his potential.

“It was the first time someone outside of my immediate family believed in me even when I didn’t believe in myself,” Levin says. “That made all the difference in the world.”

The two soon formed a close bond, and under Collver’s coaching, Levin soared to success. After winning his first national speed climbing title at only nine years old, he went on to become a 19-time national climbing champion and represented the U.S. at the Youth Olympics in 2014 and 2018.

But tragedy soon struck: when Levin was 10, Collver developed lymphangioleiomyomatosis, a rare lung disease that required a double lung transplant. Though Collver’s steadily decreasing lung capacity forced her to lug around an oxygen tank, she never stopped climbing.

When Levin joined American Ninja Warrior in 2016, 12 years after Collver successfully received the lung transplant, he was inspired to use the show as a platform to support others going through similar struggles.

“My big vision and drive to compete on American Ninja Warrior that first time around, and since then, has been to raise awareness for organ donation and advocate for people to register as organ donors,” he says.

To Levin, the show means more than just the physical challenge.

“It’s not only about doing these really advanced obstacles on a course, but it’s also a platform to understand how to overcome obstacles outside of that,” he says. 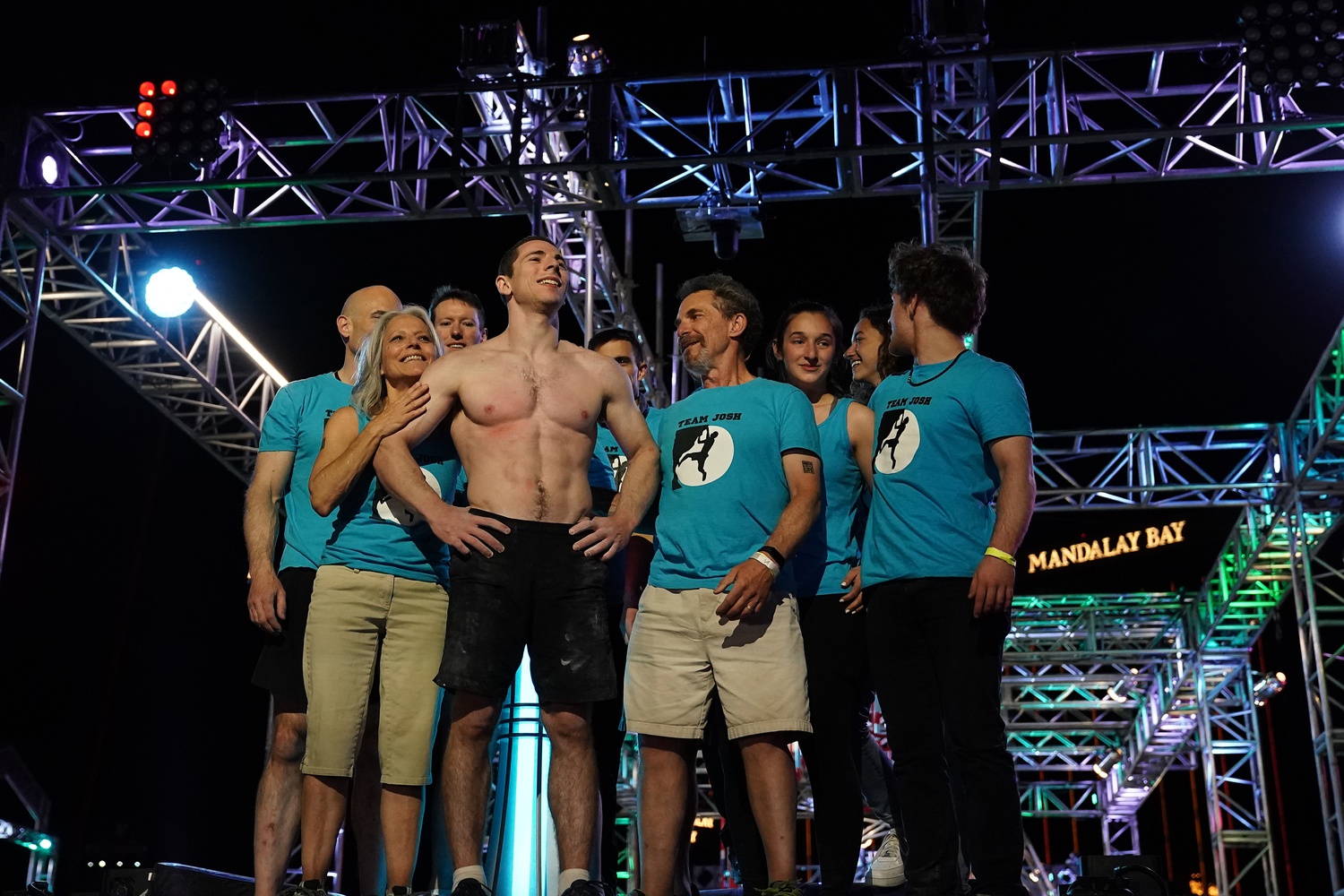 Levin poses with his family and friends at the finals. By Courtesy of NBC Universal Media

Before his first competition season, Levin, too, faced challenges in his personal life and academic life as an undergraduate at Northeastern studying mechanical engineering. Already struggling through a breakup and a difficult semester in which he earned a D in thermodynamics, Levin underwent surgery for a shoulder injury, putting a stop to all athletic activity for four months — including his plans to compete in American Ninja Warrior.

“It was the first time in my life where I really felt like the things that I identified with — namely, being strong academically, strong physically, strong emotionally — were all being pushed out,” he says. “I couldn’t have that same faith in my abilities that I used to have.”

Hoping to switch focus and escape Boston for a while, Levin accepted an internship at the NASA Jet Propulsion Laboratory in California as a member of the Mars Perseverance Rover group. In the process, he gained perspective on the struggles of recent months.

“People were taking the same passion I had for climbing and applying it to solving these truly groundbreaking challenges, like putting a new rover on the surface of Mars,” he says. “That completely blew me away.”

Newly inspired to rise to his own full potential, Levin finally made it onto the eighth season of American Ninja Warrior in 2016 and was named Rookie of the Year. He returned again in 2017 and 2018, each time making it to national finals. This year, for season 14, Levin returned to the American Ninja Warrior stage for the first time since 2018, falling just short of the $1 million dollar prize. In the intervening four years, Levin reached for new heights in climbing and fine-tuned his academic interests.

When rock climbing was introduced for the 2020 Tokyo Olympics, Levin focused his efforts on his Olympic dream. He placed seventh at the U.S. Olympic Trials, falling short of the top four ranking required to qualify.

Around the same time, an opportunity knocked on Levin’s door. Levin’s former high school teacher had been developing a new American Ninja Warrior-themed physics curriculum at the Synapse School, a K-8 school in California. The teacher, who had seen Levin compete on the show, asked if he would like to be a guest instructor for the pilot course.

Levin was thrilled. “I sat there sitting at my phone like, ‘How can I say yes faster?’” he says.

In the following years, Levin worked with the Synapse School to develop a project-based model of learning that would bring the physics of the American Ninja Warrior obstacle course into the classroom.

“This opportunity for me to teach this class — which combines my three passions of education, plus technology, plus Ninja Warrior — was just the perfect intersection,” he says.

Realizing that he had developed an interest in teaching, Levin decided to pursue a master’s degree in education, enrolling in the Learning Design, Innovation, and Technology program at the Graduate School of Education.

Levin returned to the Synapse School this fall to take on a full-time teaching position dedicated to interdisciplinary, hands-on learning.

Still, no matter where Levin’s teaching and American Ninja Warrior dreams take him, he’ll never let go of the rock climbing journey that started it all.

“It’s very much a lifelong pursuit,” he says, scanning the crowded gym. “I know plenty of people in their 70s who still climb to this day, and I hope to be climbing to that age and beyond.”

His enthusiasm for the sport convinced me to try my own hand at climbing.

I ask about the most difficult path on the wall, and he agrees to demonstrate. He scales the wall with ease, leaping from one electric blue handhold to another. As he flies through the air, shouts of awe erupt from the mats below.

I try my luck on easier terrain. When I hit the ground again, chalk dust smeared on my jeans, I can see his knack for teaching. “See?” he says, giving me a high-five. “It’s just problem-solving.”

— Magazine writer Claire Yuan can be reached at claire.yuan@thecrimson.com.