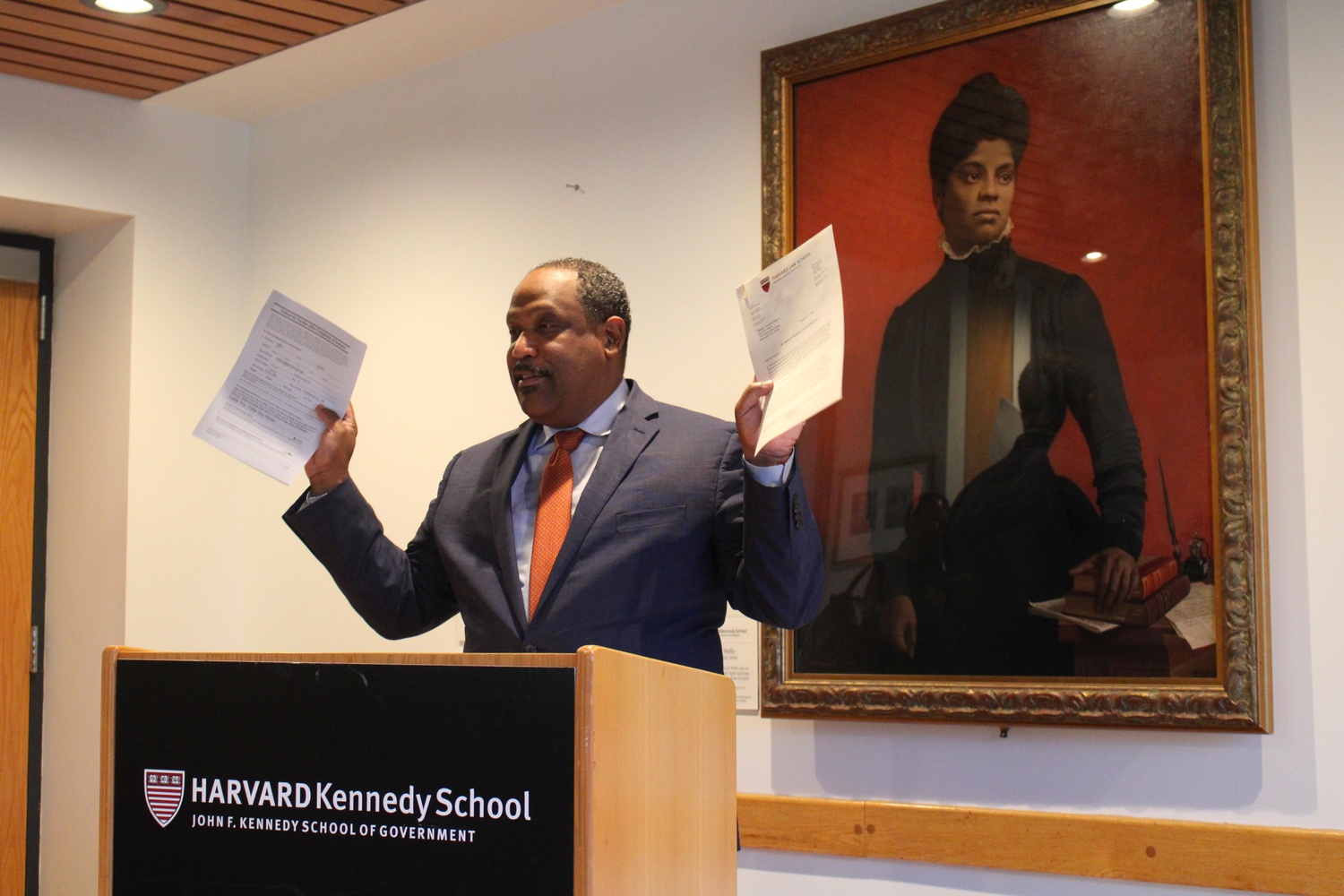 Harvard professors and representatives from Black women’s rights organizations unveiled a petition for a posthumous presidential pardon for Callie G. House, who was described as “the foremother” of the slavery reparations movement during a press conference Wednesday.

Standing in front of a portrait of Ida B. Wells in the Harvard Kennedy School’s Fainsod Room, HKS professor Cornell William Brooks called on President Joe Biden to pardon House, saying the move was long overdue.

Brooks was joined by Ronald S. Sullivan Jr., a Harvard Law School professor; Lynn V. Dymally, acting president of the National Congress of Black Women; Erika Swaringen-Blankumsee, a representative of the National Association of Colored Women’s Clubs; and a group of Harvard students who helped draft the petition.

Born into slavery in Tennessee in 1861, House later co-founded the Ex-Slave Mutual Relief Bounty and Pension Association, an organization that lobbied the United States Congress to provide reparations for ex-slaves in the 1890s. At its peak, House’s organization boasted hundreds of thousands of members, drawing the attention of several federal agencies that aggressively investigated the group. With scant evidence, House was sentenced in 1917, to a year in jail after she was convicted of mail fraud by an all-white male jury.

“As a consequence of her advocacy, she was targeted, charged, convicted, and incarcerated in her own country,” Brooks said during the press conference. “So here we are, 100 years later, seeking a pardon for a woman — the vindication of a legacy, and exoneration of history.”

Lindsey Batteast, a second-year master’s of public policy student at the Kennedy School who worked to draft the pardon petition, said the students were inspired by how House overcame numerous obstacles in her life to become a leading figure in the reparations movement.

“There’s this saying that you die twice: one time when you stop breathing and the second time is when someone says your name for the last time,” Batteast said. “We cannot allow for the legacy and leadership of Callie House to die.”

“Callie should be a household name without any debate,” Batteast added. “Her legacy should be honored — not stained with an unjust conviction.”

Swaringen-Blankumsee said the reparations movement led by House “should have changed the trajectory of where we are today in this country.”

“Callie House — a true American hero — deserves to have her name spoken in great regard and reverence,” Swaringen-Blankumsee added. “So today, we all stand before you giving Callie House the support that she really deserved, the voice that was stripped from her.”

Sullivan called on Biden to quickly approve House’s pardon, which he has “exclusive and nearly unfettered authority” under the Constitution to do.

“It was an awful, awful conviction designed only to stop a reparations movement,” Sullivan said. “It’s a horrific injustice that has to be remedied.”

The petition was sent to the Department of Justice and to the White House after the end of the press conference, according to Sullivan.

In an interview on Tuesday, Brooks said he expects Biden to quickly approve House’s pardon.

“I fully expect my students and our colleagues to go to the White House to celebrate the righting of a historical wrong,” he said. “There’s no question as to the guilt of the federal government in prosecuting an entirely innocent woman.”

“President Biden has a great many difficult decisions related to climate change, related to Ukraine, related to inflation, related to gas prices,” Brooks said. “This is not a hard decision.”