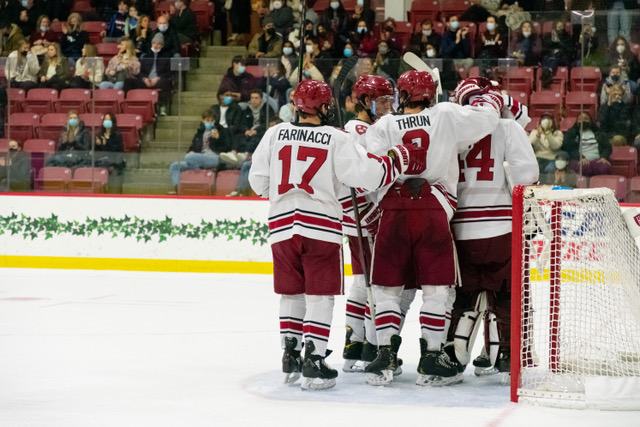 The Harvard men’s ice hockey team faces a daunting schedule in the coming weeks, with home games against No. 16 Cornell and No. 1 Quinnipiac preceding the first round of the Beanpot Tournament against No. 18 Boston College. Despite returning key players to the lineup in the past few weeks, including senior forward and captain John Farinacci, the Crimson is still searching for consistency as it looks to move past a mixed winter break and hit its stride through a challenging schedule.

“I think we're still forming some chemistry and different combinations,” head coach Ted Donato said. “We have to be able to…find different ways to be successful when teams try to be very sound defensively and clog up the neutral zone. I think we’ve got to find a way to…use our speed to get in on forechecks and be able to play and generate offensive chances that way.”

In its first game back from winter break on December 30, the Crimson battled the No. 5 Boston University Terriers at Walter Brown Arena in a top-10 showdown. Terriers forward Quinn Hutson scored on the power play just over two minutes into the game, but senior goaltender Mitchell Gibson and BU goaltender Drew Commesso quickly took control. Despite allowing the early goal, Gibson put together an exceptional performance, and Commesso matched him save for save until a late tying goal from sophomore forward Matthew Coronato. Despite Harvard forcing overtime late in the third period, Terriers captain Domenick Fensore scored off the rush with less than a minute remaining in OT, securing a hard-fought 2-1 win for BU.

“I felt like we battled, but I don't think we were as sharp as we could have been,” said Donato on the loss to the Terriers.

Despite suffering a difficult defeat less than 48 hours earlier, Harvard started 2023 on a strong note, defeating the Northeastern University Huskies 8-4 in front of a sold-out home crowd on New Year’s Day. Six different Crimson players scored, including junior forward Ryan Drkulec and first-year forward Philip Tresca, who each recorded their first collegiate goals. Despite Harvard controlling play early and maintaining a 3-0 advantage early in the second period, the Huskies quickly came to life, tying the game by the late stages of the period. However, late second-period goals from first-year forwards Casey Severo and Joe Miller restored the Crimson advantage, and Tresca and junior forward Alex Laferriere put the finishing touches on the victory in the third period.

Harvard began its first road trip of 2023 against the Princeton Tigers on January 6. After a scoreless first period, the Tigers took control in the second period, riding two goals from captain Liam Gorman to a 3-0 lead entering the final 20 minutes of action. However, the Crimson refused to go away quietly. Coronato cut into the deficit on the power play midway through the third period, and goals from Miller and Coronato 16 seconds apart late in regulation sent the game to OT tied at 3-3. In overtime, an outstanding individual effort from Laferriere provided the game-winner, completing Harvard’s comeback and the Crimson’s season sweep of the Tigers.

Despite the thrilling win over Princeton, Harvard’s momentum ground to a halt the next night against the Quinnipiac Bobcats. The Bobcats, currently ranked No. 1 in the NCAA, are second nationally in goals per game and first in goals-against per game. Quinnipiac put two goals on the board in the first period, creating offense on a partial breakaway and off a well-executed give-and-go. The Bobcats extended their lead in the second period by cleaning up a lively rebound in front of the net, and while sophomore forward Alex Gaffney pulled the Crimson within two with a goal early in the third period, Quinnipiac goaltender Yaniv Perets, who ranks fourth in the nation with a 1.75 goals-against average, slammed the door on a potential comeback with a strong third period, handing Harvard its first defeat of 2023.

“Quinnipiac I thought played a very good game,” Donato said. “We weren't able to get enough going in the first few periods to be able to not chase the game.” 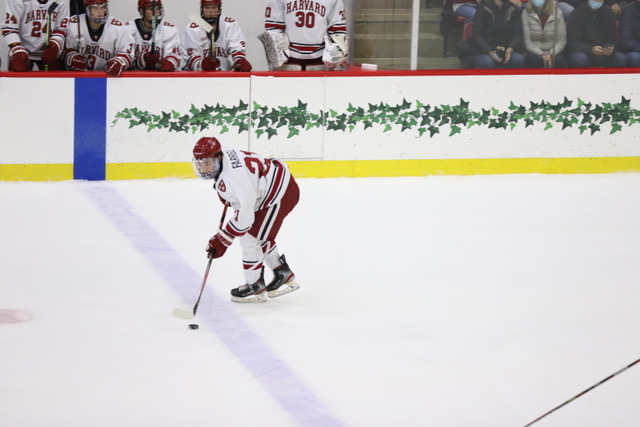 Junior forward Sean Farrell goes on the attack against Cornell on Nov. 5, 2021. Farrell is the Crimson’s leading goalscorer on the season. By Owen A. Berger
Advertisement

Back at home on January 13, Harvard overcame an early deficit to defeat Clarkson University 4-1. Junior goaltender Derek Mullahy, seeing his first action since November, posted an excellent performance, saving 25 of 26 shots. Farinacci also rejoined the lineup for his first action of the season, recording two power play assists in his return from injury.

“Feels nice to be back, with a long, long couple of months being out. Physically feeling a lot better,” Farinacci said. “There's nothing like playing games.”

Within the first six minutes of the game, Thrun was forced to the box for interference and gave the Golden Knights a power play, which they converted via a goal by All-American Alex Campbell. Coronato responded immediately, capitalizing on Harvard’s first power play to tie the game at 1-1 after the first period. The Crimson dominated the second period with 19 shots on goal, but Clarkson goaltender Ethan Haider kept the onslaught at bay. Harvard continued the offensive aggression into the third period, starting with a power play advantage carried over from the end of the second. Again the Crimson capitalized, as junior forward Sean Farrell put Harvard in front 2-1. Goals from Gaffney and Miller later in the third period provided critical insurance, giving the Crimson a 4-1 victory in its captain’s return to action.

“John is a real important part of our group…he's been a leader for us and a real productive player all over the place in all situations; an older, more mature center-iceman that's been through some big games, whether that's in the league or even U.S. World Juniors,” Donato said.

The following night, with Mullahy again between the posts, the Crimson welcomed the St. Lawrence Saints to Bright-Landry Hockey Center. Harvard started with a dominant first period, scoring three goals on 13 shots, with Farrell tallying two goals and Miller recording one. Miller and first-year defenseman Ryan Healey capped off the scoring with second period goals, and Mullahy continued his strong weekend in net, posting 23 saves for his first career shutout.

“I think that we've had some guys in and out of the lineup, which a lot of teams do, but I thought we made a step in the right direction last weekend,” Donato said.

In the Crimson’s second meeting of the season with Yale on January 20th, Harvard took down the Bulldogs in a 3-2 OT win. With Gibson back in net after a weekend off, the Bulldogs gave the Crimson all they could handle, taking the first lead of the game midway through the first period. Harvard failed to respond for the remainder of the first, but came out swinging in the second, with goals from Miller and first-year defenseman Mason Langenbrunner (the first of his career) putting the Crimson back in front. Yale tied the game four minutes later, and after a scoreless third period, the bitter rivals headed for overtime tied at 2-2. After a back-and-forth extra session, Coronato tallied the winning goal with 19 seconds to play, using a series of moves in the crease to slide home the game-winner and secure Harvard’s season sweep of the Bulldogs.

Despite the thrilling victory on Friday, Harvard fell flat in a Saturday night defeat against the Brown Bears. Brown came out quick, scoring within the first three minutes of the game. However, Farrell answered less than a minute later, recording his 14th goal and 29th point of the season. The game remained tied until the second period, when the Bears potted two goals to claim a 3-1 advantage heading into the third period. The Crimson turned up the pressure on Brown in the third, outshooting the Bears 19-2, but despite a late tally from Farrell, Brown held on for a 3-2 victory.

With players moving in and out of the lineup, Harvard’s line combinations have frequently been in flux, but Farinacci believes the team’s strong chemistry will make any adjustments seamless.

“We're all pretty close on the team…you can kind of throw anybody together and kind of make things happen, which I think is a great part about our team,” Farinacci said. “Whatever comes our way, I think everybody's kind of ready for it.”

Harvard has a two game homestand this upcoming weekend, taking on ECAC rivals Colgate and Cornell. Both will bring competitive hockey to Bright-Landry, especially on Saturday against longtime rival and No. 16 Cornell.

“Our guys will be excited to have these intense, emotional, important games coming up,” Donato said.