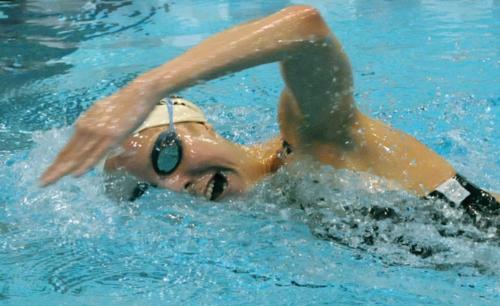 This week, The Full-Court Press takes you to Blodgett pool where, after racing against some of the top five schools in the nation earlier this month at the Georgia Invitational, the women’s swim team is back in training mode preparing for the spring season. Leading the charge are seven seniors, including Eliot resident Katherine Pickard. If there’s one thing to know about the senior from Phoenix, it’s that she absolutely loves Frosted Flakes, or as her teammates say, “you don’t get between Pickard and her flakes.” In this exclusive interview, Katherine talks about flakes, Shamu, and most importantly, beating Princeton. Every week The Full-Court Press gives you the sort of personal scoop that you’re not likely to hear at a typical press conference.

Stats: In Pickard’s first collegiate race at Harvard, she won in the 500-yard freestyle against Cornell. Since then, she’s racked up 11 top-three finishes at the annual Ivy Championships, provisionally qualified for NCAAs every year, and now holds four school records.

Frosted Flakes, the breakfast of champions.

It changes from meet to meet but “Infiniti” by Guru Josh Project, “Yeah 3x” by Chris Brown, “Dangerous” by the Ying Yang Twins, “Sexy Bitch” by David Guetta.

Princeton so we can jump in their pool and celebrate when we win.

Spontaneous dance party to “I’m On a Boat” while also eating pizza.

5. Most embarrassing moment you've had in the pool.

Dropped my pants in the locker room in front of my male assistant coach (on accident).

I would say Shamu because my tricks look pretty but I have a vicious bite.

7. Most ridiculous thing you have heard a fan yell at a meet you were swimming in.

I’m not much of an athlete out of the water, but definitely tennis so I could wear the cute outfits.

I’m terrified of heights so I wouldn’t play.

I would have a picnic with Nathan Adrian on the beach.