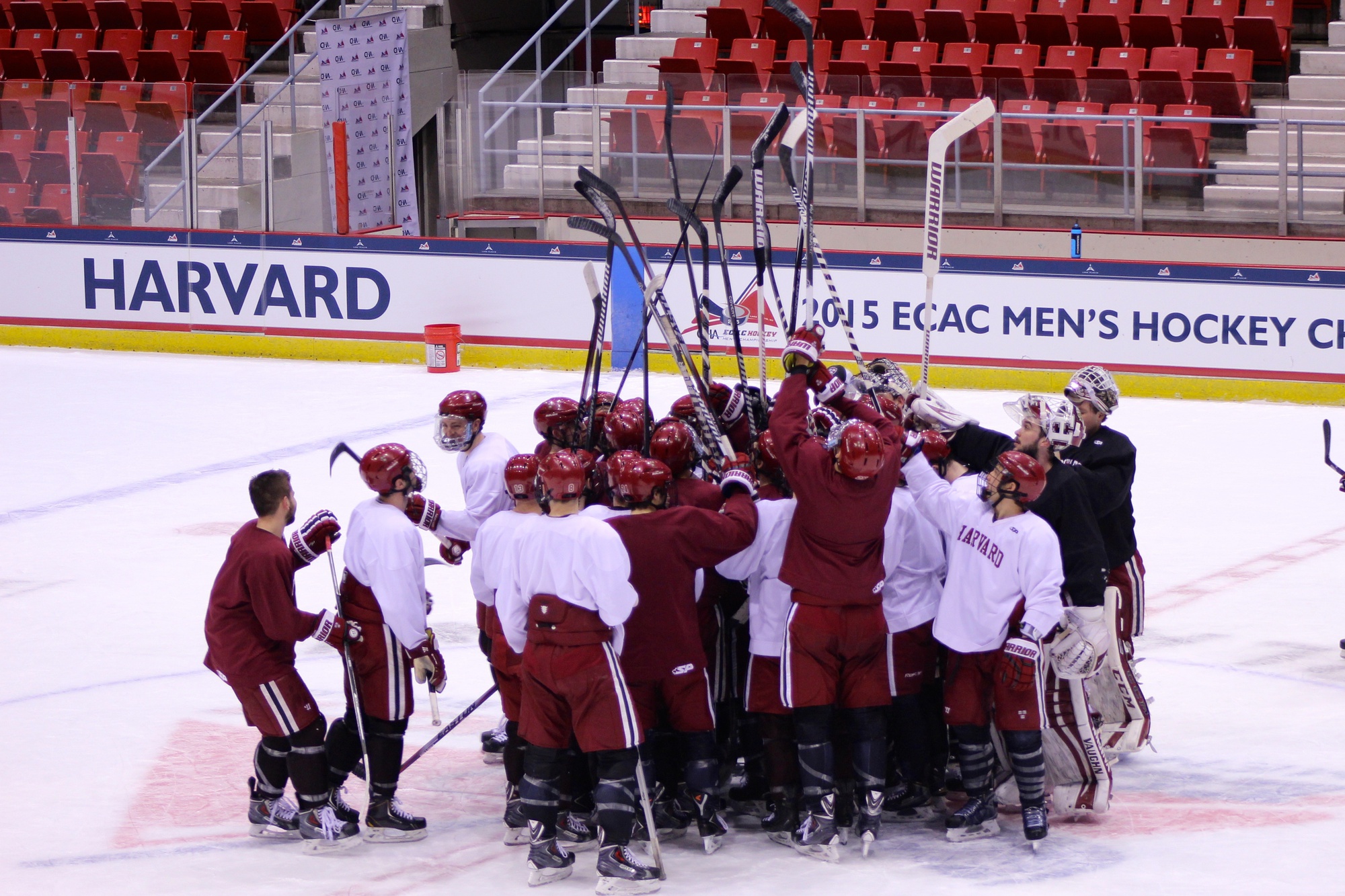 With just one game of ECAC hockey left to be played, the Harvard men’s ice hockey team has the NCAA tournament in its sights. Having beaten top-seeded Quinnipiac, 5-2, on Friday to advance to the conference championship game, the Crimson has an 81 percent chance of advancing past this weekend according to College Hockey News. Here, The Back Page takes a look at some of the possible scenarios where Harvard can advance.

All listed rankings reflect the latest Pairwise rankings, a highly predictive method of determining which 16 teams will advance to the NCAA tournament. The 16-team field officially will be announced on Sunday at noon. All times are listed in EST.

If the Crimson can pull out a win on Saturday, it can put its calculators away. With a victory over No. 13 Colgate in the ECAC title game tonight, Harvard will secure an automatic bid to the NCAA tournament. The Crimson currently ranks 11th in the Pairwise but could move up to as high as 8th, which would likely give Harvard a two-seed in the tournament next weekend.

If the Crimson loses, Colgate will instead punch its ticket to the tournament. However, Harvard’s season still has a good chance of continuing. But the Crimson’s fate will lie in the hands of several teams around college hockey.

Back in Boston, No. 3 Boston University takes on UMass Lowell in the Hockey East championship game Saturday night. The River Hawks are tied for 16th in the rankings and are currently on the outside of the field looking in. The Terriers will be playing in the NCAA tournament regardless of the result, but a win for UMass Lowell will knock one bubble team out of the field. Should Harvard lose and BU win, the Crimson will have a spot in the field. But should Harvard and BU both lose, the Crimson has to turn its attention elsewhere.

The other action Saturday that has an impact on Harvard’s chances will be taking place in the Big Ten and the National Collegiate Hockey Conference. No. 10 Minnesota takes on No. 19 Michigan for the Big Ten Title at 8:00 p.m., and No. 6 Miami (Ohio) faces No. 9 St. Cloud State for the NCHC title at 8:30 p.m. Meanwhile, No. 2 North Dakota plays No. 7 Denver in the NCHC consolation game.

If Harvard and BU each lose, the Crimson will need wins from Minnesota, St. Cloud State, and Denver in order to advance. Harvard would receive a four-seed in the tournament in this scenario.

Elsewhere across the ECAC, despite losing to the Crimson in the conference semifinals on Friday, Quinnipiac has all but secured its spot in the field. The Bobcats are currently tied for 14th in the PairWise but can not fall any lower than 15th, meaning their 5-2 loss to Harvard will not be the final result of the season for the ECAC regular season title winners.

Meanwhile, No. 18 Yale has a 28 percent chance of advancing as well, but the Bulldogs will need their fair share of help. Yale has a chance to advance if both the Crimson and the Terriers can pick up wins in their respective championship games. The Bulldogs fell to Harvard in a three-game quarterfinal series at Ingalls Rink last weekend.

Scenarios for Harvard To Advance: