Penn Serves as Kryptonite for Football 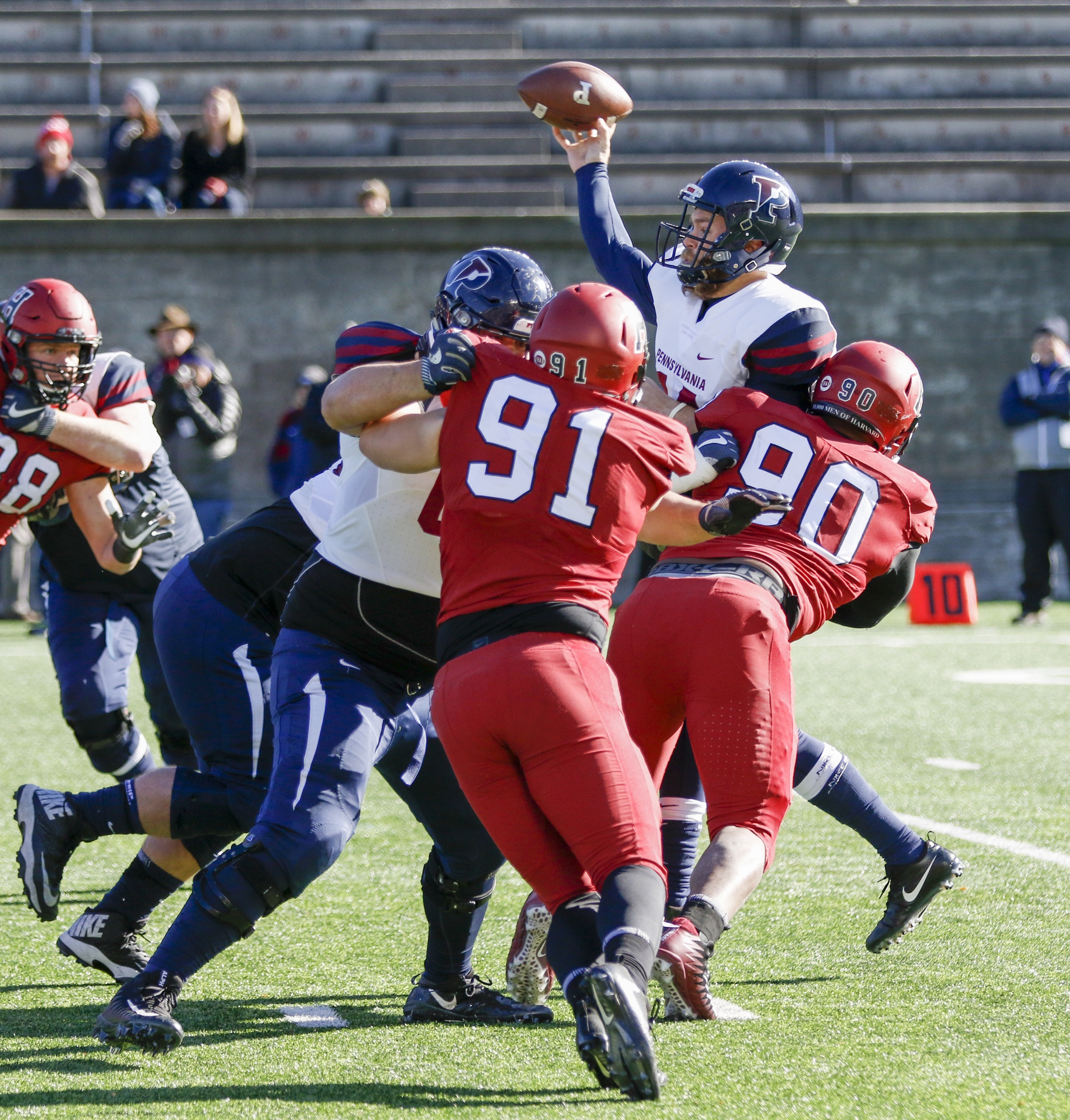 Harvard senor defensive tackle Stone Hart delivers a blow on Penn senior quarterback Will Fischer-Colbrie. The Penn signal-caller completed 13 of 25 passes for 130 yards and a score against the Crimson. By Timothy R. O'Meara
By Cade Palmer, Crimson Staff Writer

When it comes to Ivy League football, Harvard and Penn are the proverbial measuring sticks.

Since 1997, the Crimson and the Quakers have combined to capture the Ivy League title 18 times, each claiming a share nine times apiece. Inevitably, the grudge match before The Game has division title implications. That did not change last weekend when Harvard’s Ancient Eight title hopes were dashed by Penn, a team that began the season 2-4 but has not lost since.

This year isn’t the first time that the Crimson has been downed its Pennsylvania rival. Particularly in recent years, the Quakers have been a dangerous team for the Crimson.

Harvard outmatches every single Ivy League opponent in series records since 1992 save one—Penn. In the last 26 seasons, the Crimson has been moderately consistent in beating every other team in the Ivy League, winning at least 65 percent of the time in each Ancient Eight rivalry. At it’s worst, Harvard is 17-9 against Princeton and Cornell. At best, the team outpaces Columbia 22-4.

The Quakers serve as a clear outlier to the Crimson’s Ancient Eight dominance. Against Penn since 1992, Harvard has a .346 win percentage. That means that the Crimson has won only nine of the last 26 games.

These past few seasons have proved especially brutal to Harvard, with Penn stealing wins from the Crimson at the exact wrong time.

In 2015, Harvard had not lost in 22 games. Going into the half, the Crimson led by four. A third quarter pass gave away the lead, but it wasn’t until the fourth quarter that the deal was sealed.

In front of an opposing crowd, sophomore wideout Justin Watson took a sweep and sprinted down the sideline for 79 yards and the final points of the game. In matchup, Harvard lost the game, the outright Ivy League title, and a 22-game win streak. In 2015, Penn, as well as Dartmouth, claimed the Ancient Eight title alongside Harvard.

In 2016, the story did not vary much. The Crimson sported a flawless divisional record at 5-0 and was one game away from a share of the Ivy League crown as the team went into the game against the Quakers. This time, Harvard was down four going into the half but tied it up at 14-14 with 3:23 left in the game.

Watson, now a junior, scored again to take the victory, this time through the air and with 15 seconds remaining until the whistle. Penn tacked on another touchdown as the final buzzer sounded to take the game, 27-14. Needing one victory to earn a championship ring, the Crimson missed its shot against the Quakers, and the following loss to Yale kept the team from the 2016 crown. Penn and Princeton shared the top spot for the 2016 season.

In 2017, the Quakers came back to Harvard Stadium and did nearly exactly what they had done the last time they stepped into the historic venue. On the first play from scrimmage, running back Tre Solomon took the sweep right and ran for 77 yards—only two yards less than Watson’s run in 2015.

That sprint, like Watson’s, sealed the deal, as the Crimson never broke six points even though Penn continued to build on its initial seven-point lead. With the 23-6 loss, Harvard fell out of contention for the Ivy League title. Now, the only implication for The Game is whether or not Yale will win the division title outright.

The Quakers succeed against the Crimson by halting Harvard’s offensive production. In the 2017 episode, the Crimson scored in the single digits for the first time in 80 straight games, and only the second time in 147 contests. The last team to keep Harvard below 10? Penn in 2009.

Last year’s game was similar. On the night, the Crimson netted 14 points, its second-lowest on the season. The team fought for 25 points in the 2015 loss to the Quakers, its third-lowest of the season’s 10 games.

That defensive prowess relies, in part, on the team’s affinity for hurries and sacks on the Crimson quarterback. In every one of the last three matches, Penn has outpaced Harvard in sacks. As a result, the Crimson’s pass game has suffered. This year, senior quarterback Joe Viviano dropped far less than he threw, many times forced to escape the pressure within the pocket. Viviano actually led Harvard in the rushing category on Saturday with 58 yards—not because of designed quarterback runs but because he had to run a lot.