O-Line Down But Never Out

Plagued by injuries and ailments, Harvard's offensive line looked to be a liability. But the emergence of young talent—­­in addition to the strong play of key veterans—silenced any and all doubts 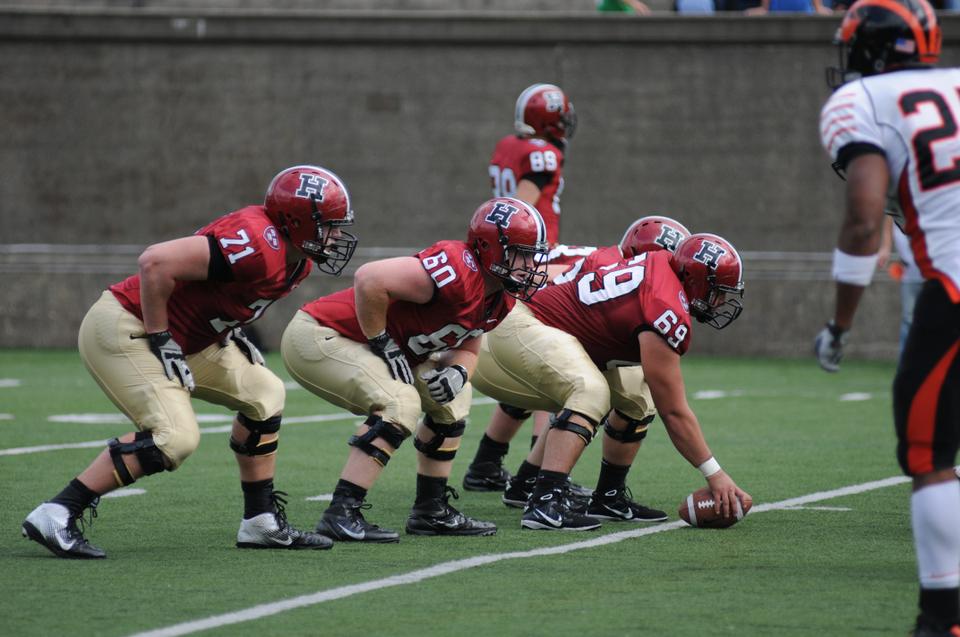 The offensive line was not initially a concern for Harvard coach Tim Murphy and the Crimson football team this season.

“With all the guys that we had to replace, there was a lot of uncertainty coming into the season,” senior quarterback Collier Winters says. “We definitely asked a lot of those guys, and they’ve done more than what we expected.”

The team suffered its first setback when senior Ben Stabler was diagnosed with a brain tumor. The 6’5, 300-pound lineman appeared in all 10 of Harvard’s games last year, starting the final five.

“[Stabler] would have been one of the top players in the Ivy League at his position this year,” Murphy says. “That was a very tough loss for us as a team, not only because he was such a good player and hard to replace, but when you consider the seriousness of his illness, it’s an emotional blow to the team.”

But Stabler’s fight has also motivated the entire football program.

“Ben comes by when he can,” Murphy says. “He’s with us on the sideline for every home game. His presence when he’s around is really a joy for a team.”

Junior tackle Matthew McCarthy was the next Crimson offensive lineman to go down.

Appearing in five games last year, McCarthy was expected to be a key part of the front line this year until he suffered a shoulder injury in the offseason which required surgery and has kept him on the sideline indefinitely.

McCarthy’s impact on the team was obvious both on and off the field.

“[McCarthy] is probably one of the most well-liked and respected guys on the team,” Murphy says. “He’s extremely tough, extremely committed, and has a super personality. He’s selfless, funny, and witty, yet understated. Everybody loves him.”

Murphy was confident that junior tackle Nick Scheidler, who appeared in just three games last year, would play an important role in McCarthy’s absence. But Scheidler’s season quickly came to an end when he suffered a severe concussion during Harvard’s preseason training camp.

“When you’ve just lost [McCarthy], you think Nick Scheidler can step up and do the job,” Murphy says. “Then we lose him in the offseason. We were in a little bit of a state of shock in the offensive line.”

Fortunately for the Crimson, several players have stepped in to fill the void.

Left tackle Kevin Murphy has become a stalwart in the trenches. The 6’7, 295-pound senior was tabbed a second-team All-Ivy League selection last year and a preseason All-Ivy League selection by Phil Steel’s College Football Preview this season. Tim Murphy says that Kevin Murphy may be the best Harvard lineman since Matt Birk ’98, an NFL Pro Bowler who now plays for the Baltimore Ravens.

But it may be Murphy’s contributions as a mentor that are most significant to the team. His leadership has helped the less-experienced Crimson linemen—like freshman Will Whitman—make an immediate impact on the team.

Coach Murphy had never before started a rookie offensive lineman, but Whitman has bucked the trend.

The 6’6, 280-pound rookie has started every game for Harvard this season, becoming the only lineman to be named to the watch list for the Jerry Rice Award, which is given to the best freshman in the Football Championship Subdivision (FCS).

And as other position players recognize, the list of impact linemen

“[Junior center] Jack Holuba, [junior guard] John Collins, [and sophomore guard] Austin Scheufele, they’re all doing a wonderful job this year,” says junior running back Treavor Scales. “They take pride in their job, and that’s one thing you can’t teach. It’s one thing you can’t coach, and they do it. It’s a beautiful thing.”

Despite the adversity, the offensive line has not missed a beat, making major contributions to the Crimson’s offensive production this season.

Allowing just 24 sacks in nine games, the offensive line has helped Harvard quarterbacks throw for just under 250 yards per game. It has also paved the way for the  Crimson running game, which has amassed over 1,600 yards on the ground.

The success of the offensive line has not gone unnoticed.

“A lot of times, the offense goes as far as the offensive line does,” Winters says. “To play as well as we have all season, a lot of that goes to the offensive line. They’ve done a great job buying time for protection and making holes for our running backs. We have a lot of talent at the skill positions, but the only reason we’re able to use it is because of them.”