Linebacker and captain Alex Gedeon has led by example, filling many roles for Harvard 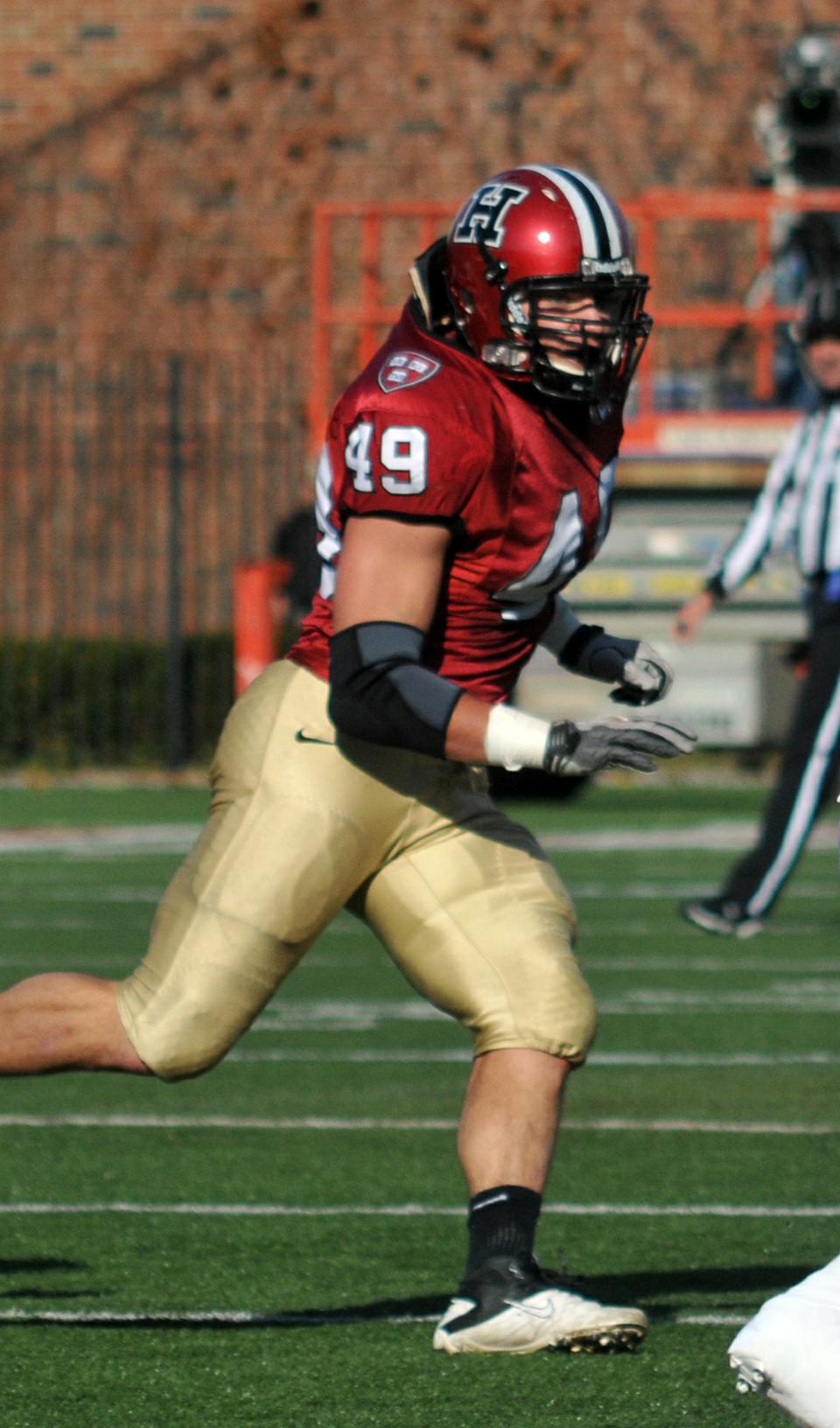 Since he arrived in Cambridge as a multi-talented recruit four years ago, Harvard middle linebacker Alex Gedeon has done everything his coaches and teammates have asked of him.

On and off the field, the senior has met every challenge he’s been faced with head-on —and sometimes even foot-on.

The latter undertaking came before a November game against Columbia last year, when Crimson head coach Tim Murphy called on the linebacker to fill in as an emergency punter after sophomore Jacob Dombrowski was involved in a car accident the previous night.

“The day before the game, we had a walkthrough on the field,” Gedeon recalls. “I was just kind of kicking the ball around, telling [special teams] coach [Tony] Reno I still had some punts in me.”

But all of a sudden, the linebacker was being asked to perform double-duty in an actual game.

Though special teams wasn’t exactly new to the senior—whose versatility had impressed Murphy when he was being recruited—the 6’2, 230 pounder had only expected one of his high school roles of quarterback, linebacker, and punter to come in handy at Harvard.

Yet when the telephone rang that Friday night, Gedeon accepted Reno’s challenge and gave special teams a try.

Surprising many of his teammates, the linebacker averaged 36.8 yards per attempt on that chilly November afternoon, topping both Lions punters. He even placed one inside the 20.

“It was one of those things where I hadn’t done it enough to put pressure on myself,” Gedeon says. “I wasn’t thinking of technique or anything. ... Once the nerves set in, I got off a couple of good ones.”

Though Gedeon found success in his new role, on the whole, the Hudson, Ohio native certainly made the right decision to focus on linebacker when he joined the Crimson in the fall of 2008.

After being named to the preseason All-Ivy League team this season, the senior has lived up to that billing and more. Gedeon’s 83 tackles lead Harvard by a wide margin, and he has not had fewer than seven tackles in any game this year.

The linebacker has also played a big role in helping Harvard achieve its league-high plus-seven turnover margin. In three midseason contests, Gedeon forced a fumble that resulted in a Crimson touchdown against Lafayette, had a key red-zone interception against Cornell, and had a win-sealing interception against Princeton.

“There aren’t enough words to describe how much he means to the team,” junior cornerback Brian Owusu says. “He knows football front and back, he’s a playmaker, he’s fast, he’s just one of those guys the whole team looks up to.”

Just as important as Gedeon’s play on the field has been his leadership off of it. A year ago, the senior’s teammates voted him Harvard football’s 138th captain, in part for the willingness to do whatever was best for the squad that he displayed against Columbia.

“Among a great senior class, he was the guy that almost everybody felt was the best guy to lead this team,” Murphy says. “His work ethic and his leadership by example are tremendous. He’ll do anything for this football team. He’s got the poise and confidence and personal qualities that you would want any captain to have.”

Perhaps most impressive was the rapidity with which Gedeon was able to earn his teammates’ admiration.

The linebacker barely played at all as a freshman and sophomore, as a number of injuries led to his recording just nine total tackles in 2008 and 2009 combined. But during those years, his coaches saw a determination and work ethic that they rewarded with a starting spot when Gedeon arrived in Cambridge for his junior season.

And the linebacker in turn paid back his coaches for that choice, establishing himself as one of the stars of the defense in a breakout year. He finished fourth on the team with 49 tackles—including a career-high 17 (with 1.5 sacks) against Yale—and ranked second on the squad with two interceptions, despite playing in just eight games.

“He’s just one of those guys that’s relentless in his pursuit of excellence, both on and off the field,” Murphy says. “That’s something you can’t coach—either you have it or you don’t.”

After that performance in 2010, Gedeon’s teammates knew he was the best man to lead them in 2011.

“It was really special,” Gedeon says of being named captain. “To be able to represent this group of men that has so many leaders and that is such close friends and has been through so much together, it was an honor.”

This season, Murphy couldn’t be more pleased with the job his middle linebacker has done leading the coach’s sixth Ivy League championship squad.

“We’ve had a lot of great captains here, but I don’t know if we’ve ever had a better captain than Alex Gedeon,” Murphy says. “He is the consummate student-athlete. He is an incredible leader, [he’s] humble, selfless, and a great player, one of the best linebackers in the country.”

Gedeon, for his part, has greatly enjoyed his time as captain.

“It’s probably been the best experience of my life,” he says.

Next year, the senior has already accepted a position at the Chicago branch of Bain Capital, a private-equity firm where he will work alongside classmate and Crimson cornerback Matthew Hanson.

“As I’ve moved through college, my interest in business and how to drive growth in businesses has grown,” Gedeon explains. “I think the work is going to be challenging and interesting.”

His coach has no doubt that Gedeon will succeed in his new endeavor, just as he did when he took on punting last year.

“He’s one of those guys that’s very goal-oriented,” Murphy says. “When he puts his mind to something, he’s going to do it.”

One thing’s for sure: at Harvard, Gedeon has already proven to be an asset with quite the return on investment.