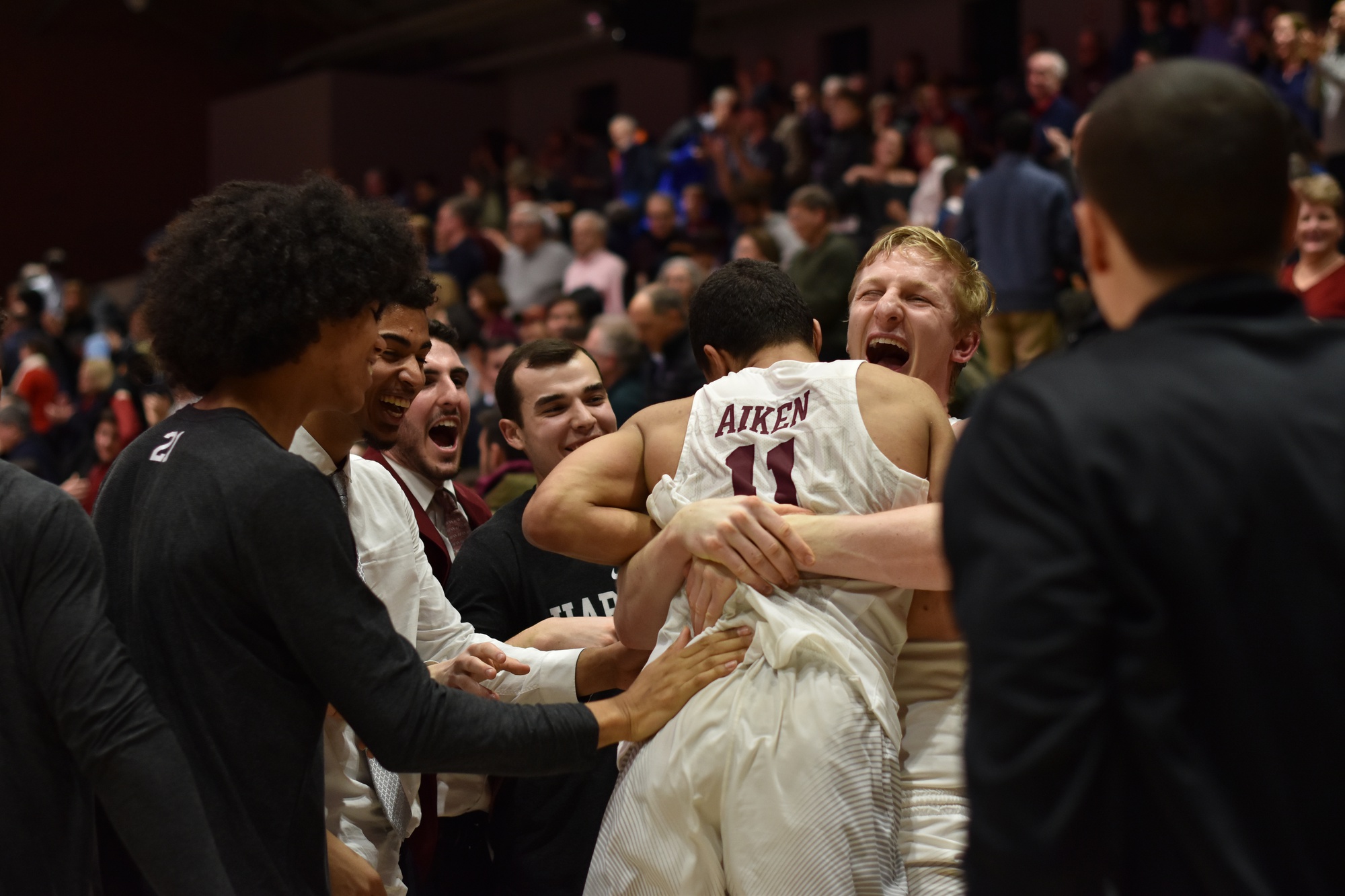 The team rejoices after its triple overtime victory over Columbia. By Quinn G. Perini
By Henry Zhu, Crimson Staff Writer

Where do I even begin?

To encapsulate a game so heart-throbbing, so unimaginable, so exhilarating in a few words? That is simply impossible. You have to have been at Lavietes Pavilion in the flesh on Friday, February 8th to understand truly how incredible a game that was.

For those folks who received texts around 9PM, saw the madness on Twitter, or somehow was watching television when the Crimson headlined SportsCenter at 11PM (or later ESPN’s Top Play of the Night), I will do my best to contextualize this wild experience.

Before I get to the fact that this game went into three overtimes (yes, three), let me also throw in that Bryce Aiken put up 44 points — just one shy of a program record — Friday night. Quite literally, this game (which may have seemed rather humdrum at first glance) would stand on the brink of the history books by the sound of the final buzzer. And yes, the buzzer did finally sound after what appeared was turning into a midnight matinee with no end in sight.

It wasn’t just the fact that fans were treated to 15 minutes of free basketball. Let me remind you that it took two unbelievable three-point heaves and a bevy of more jaw-dropping moments for fans to see this one to the end, with a few more gray hairs and potentially a heart examination in sight.

The first buzzer-beater came from the fingertips of a Columbia Lion, second-year Gabe Stefanini, to send it into overtime. Yes, the fadeaway triple over Aiken’s outstretched arms was impressive, but could the underdog Columbia team that held in check to the Crimson truly pull this one off?

It sure appeared so. The Lions roared out of extra time with a three, lay-up, and another three, and the Crimson slumped to a six-point deficit with less than two minutes left. Amidst the dejected energy in the crowd though, a few Harvard bench players clapped their hands and gave a look of confidence in that ensuing timeout.

The Crimson would need every bit of that positive energy, and frankly, some luck out of a magician’s hat. Down three and having four seconds-and-change to score from the opposing baseline, Aiken was stopped in his tracks still far away from the three-point arc. Stuck in the air, the point guard had to double-clutch and somehow mustered enough force to get that ball in the air.

Let’s be honest. The way that ball was released, I for one thought it had no chance. I’m sure most of the 1,636 in attendance thought the same.

But how on earth did that orange leather ball go in? It seemingly defied physics. 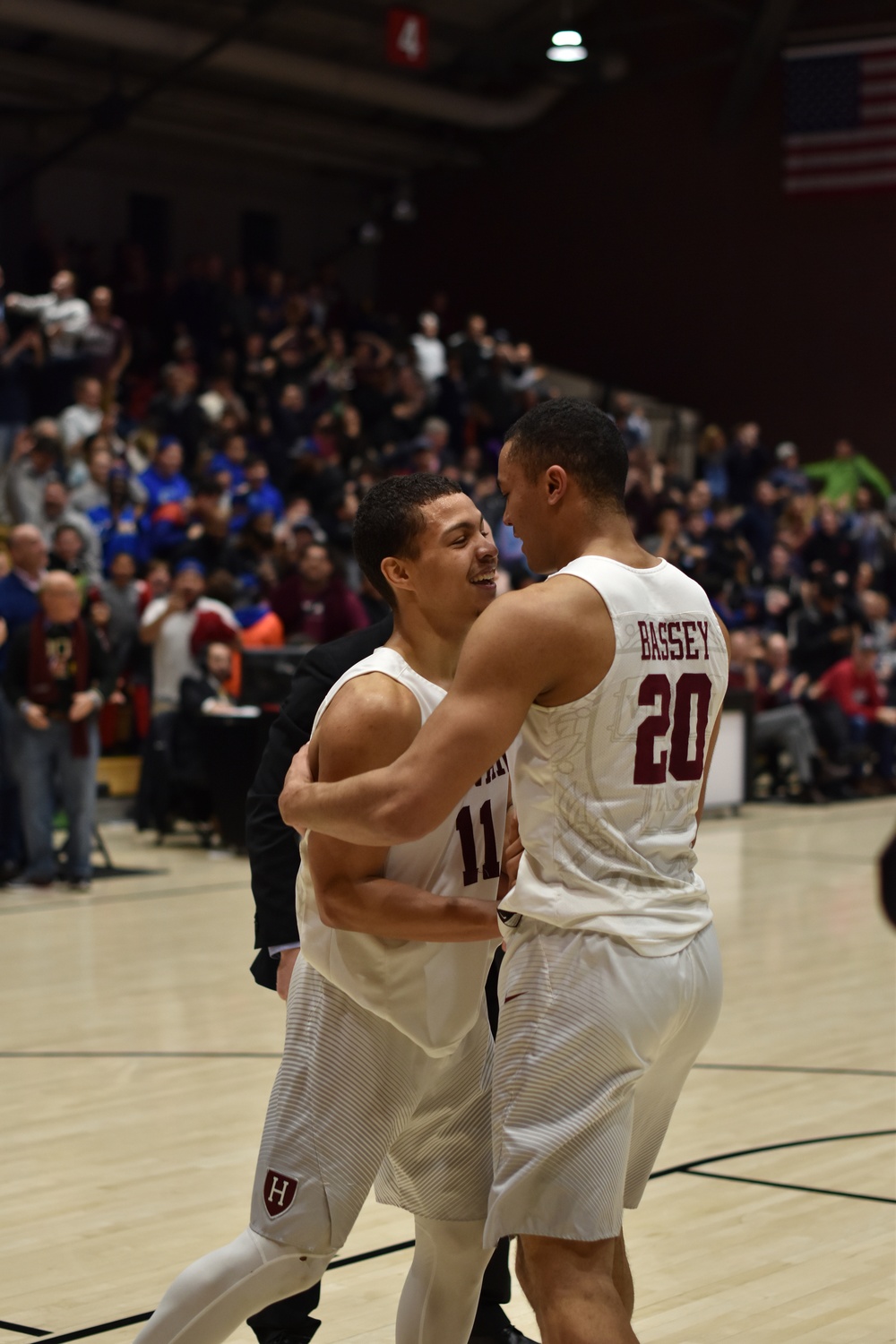 Bassey and Aiken combined for 89 minutes of action on Friday night. By Quinn G. Perini
Advertisement

At that moment, it appeared as if the gods decided to take off their light-blue and put on some crimson-red to rescue the home side. But only temporarily.

The second overtime finish saw Lions guard Jake Killingsworth drain a corner three(why anything else?) to once again force another five minutes of play.

At that point, the emotions in Lavietes Pavilion were a mix of confusion, shock, excitement, and must I say, apprehension? In the rush of human emotions from polar opposite ends of the affective spectrum, this quickly turned into a war of attrition for both sides. Players on both teams were approaching minute totals in the forties, and the exhaustion of tired bodies could be vicariously felt even in the upper rows.

The crowd though, persisted in keeping a Lavietes Pavilion not accustomed to such “late-night” madness alive. You could feel the seats shake on each Columbia free throw. A rather dormant crowd in the regular two halves of play finally awoke. I think Bryce even earned a few “MVP” chants.

The last overtime felt more like a blur, as many were readying themselves emotionally for yet another five minutes. But a nice hustle play by junior guard Justin Bassey off a missed three, a dagger-like corner triple from freshman Noah Kirkwood, and a bizarre ending that involved an ill-advised foul in the final second of play followed by a missed free throw at last allowed those at Lavietes Pavilion to exhale.

Exhale and still be shell-shocked by the whole bonanza. I still am, for sure.

The funny thing about it all? There’s another game tonight against the Big Red.

This is why I love Ivy League basketball.