Harvard Yard and the Abstraction of Climate Change 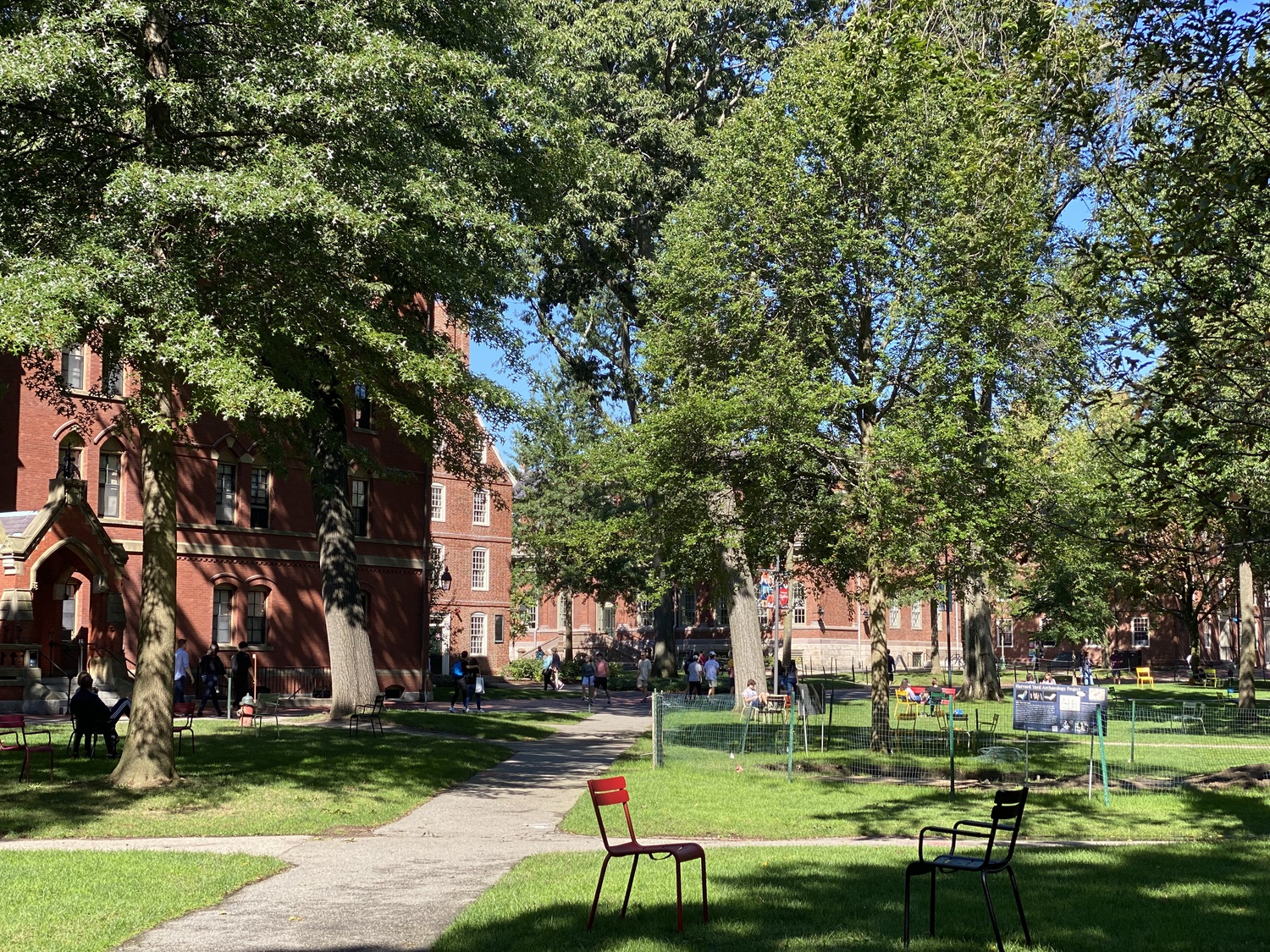 Harvard’s campus is teeming with picturesque courtyards and foliage, brick streets lined by lush shades of green that transform into different colors throughout the year. Perhaps the most famous greenspace on campus is the Yard. Originally a cow pasture, Harvard Yard was placed on the National Register of Historic Places in 1973. The greenspaces at Harvard are beautiful, making you wish you could save the memory for later.

Sustainability has had a varied history at Harvard, though the last two decades have seen substantial progress. Most notably, the Harvard Green Campus Initiative was launched in 2000 by faculty and staff, ushering in a new era of prioritizing sustainability. In 2004, Harvard adopted six sustainability principles to guide future green development on campus, and in 2008, then-University President Drew G. Faust established the Greenhouse Gas Task Force to examine greenhouse gas emissions at Harvard. This task force proposed a short-term goal that Harvard would reduce greenhouse gas emissions by 30 percent below its 2006 baseline levels by 2016. Though Harvard achieved this goal, the University still fell short in other measures.

With the climate crisis an ever-looming threat, Harvard very recently announced its decision to fully divest from fossil fuels. Though Harvard divesting is a great announcement, it is one that came only after a decade of calls to do so from students, activists, faculty, and alumni; University President Lawrence S. Bacow publicly opposed fossil fuel divestment as recently as two years ago. Despite Harvard’s announcement on divestment, the timeline is still unclear, and organizations like Fossil Fuel Divest Harvard still intend to hold the University accountable for further action to mitigate climate change. As Jade O. Woods ’22, who is involved with Fossil Fuel Divest Harvard, said in an interview, “There’s still so much that Harvard needs to do, and that’s part of what the new purpose of our campaign is going to be doing, because we’re staying and continuing the fight to hold Harvard’s feet to the fire and see this commitment through.”

It’s an interesting juxtaposition that Harvard maintained investments in fossil fuels until recently — investing in an industry that has significantly contributed to climate change — while also maintaining beautiful courtyards filled with flora. The picturesque greenspace of Harvard Yard is in stark contrast to a polluted atmosphere and a scorched Earth. So what is this disconnect? Why was it so difficult for Harvard to cut ties with fossil fuel investments while so easily participating in actively recycling, composting, and being energy efficient on campus, among countless other sustainable initiatives?

Though Harvard has a multitude of outdoor courtyards, these spaces can be described as a more filtered view of nature, ones that are constantly pruned and maintained. Providing students with more opportunities to get out into more naturally occurring environments rather than man-made ones would allow students to develop a deeper connection with the environment as a whole. This connection can bring deeper meaning and more relevance to everyday actions of sustainability, because “it becomes very abstract when you’re just like ‘Oh, I’m composting because I’m supposed to’” as Cole Petersen ’23, the Office of Sustainability’s representative for Quincy House through the Resource Efficiency Program, described in an interview.

Being outdoors and actually seeing nature gives people a better sense of what will be lost if the adverse effects of climate change are not curbed quickly enough. As Petersen explained, “Personal connection to your space and to your greenspace is incredibly important for motivating sustainability because it kind of reminds you of what the goal is.”

Harvard should sponsor more initiatives to both expand the greenspaces on campus, as well as fund opportunities for more students to go and explore nature, in addition to continuing to take action to fully divest from fossil fuels. Groups like the Harvard Outing Club and programs like the First-Year Outdoor Program do a good job in exposing students to the great outdoors beyond Cambridge, but more institutionalized and broad initiatives aimed at teaching all Harvard affiliates to become better stewards of the environment would be extremely beneficial, and would allow discussions about climate change to transform from abstract to urgent.

Though Harvard Yard probably won’t be able to revert back to a cow pasture, the University can still be a more positive agent of change when it comes to protecting the environment by expanding access to nature, as well as follow through with its promise to divest from fossil fuels.

Picturing Harvard Yard as a wasteland is jarring — but not a reality too far off if we do not begin treating climate change with the urgency it necessitates.