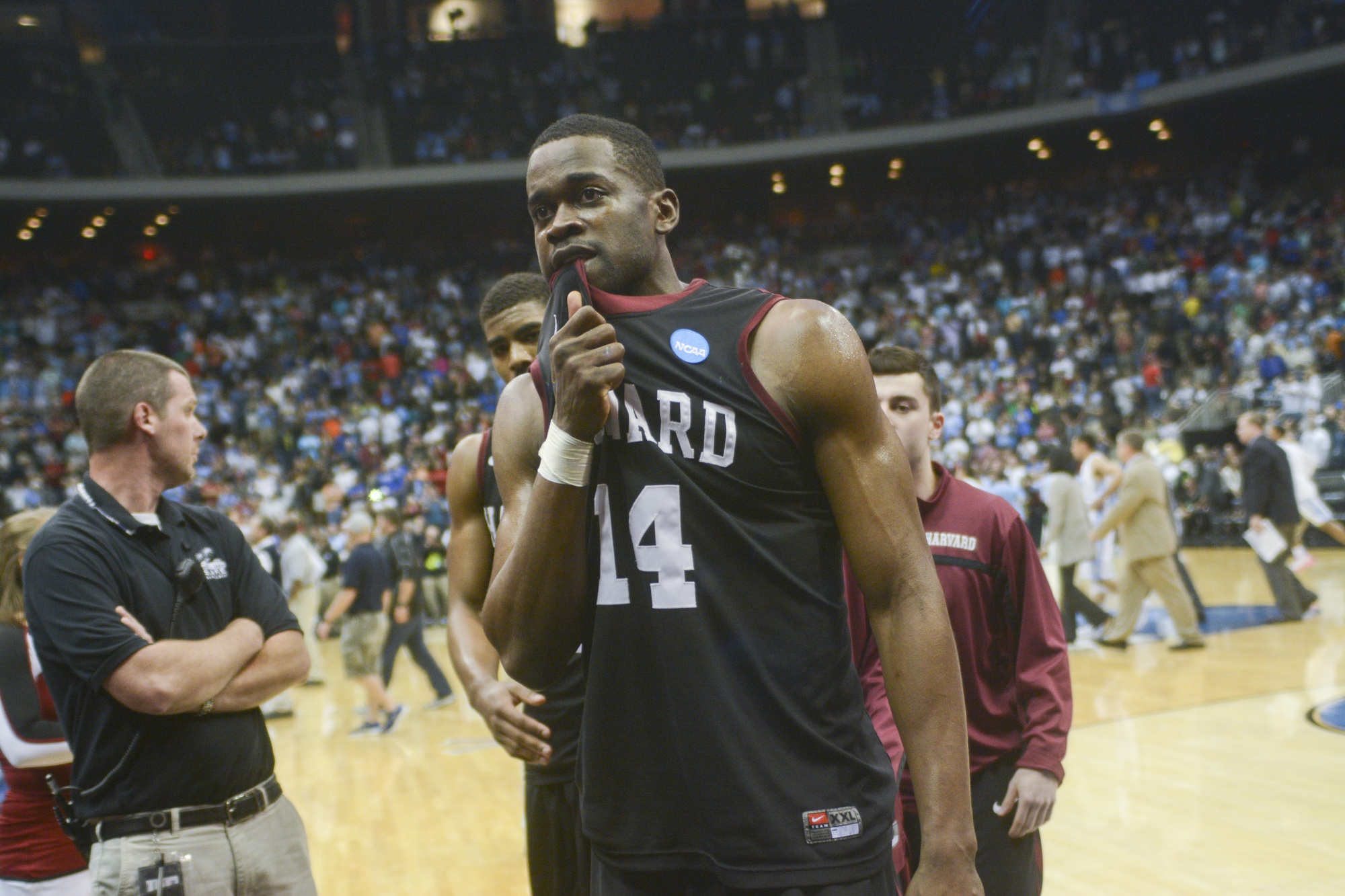 A missed three pointer and a close loss to powerhouse UNC could be the defining moment of this year's men's basketball season.
By Jacob D. H. Feldman, Crimson Staff Writer

How do you prevent a bad ending from ruining everything else? How do you remember a season for what it was rather than how it concluded?

These are not rhetorical questions. I really don’t have answers.

I hoped co-captain Steve Moundou-Missi might, for his sake and mine. Talking in hushed tones in the Harvard men’s basketball locker room after the season-ending 67-65 loss to North Carolina last Thursday, I asked him:

How long will the sting of this loss blot out all the highs of this season—a fifth straight Ivy championship, a Defensive Player of the Year Award, a thrilling win over your archrival in an Ivy Playoff Game? How long will it take before you can look at all of that in proportion rather than just thinking about what just happened?

That can’t be right, can it?

Entering a losing locker room in the NCAA Tournament feels like walking into a painting. Players known for their movement are deathly still. A team that has learned to communicate so well is absolutely silent. It feels like the kind of place where the word somber was invented.

The players sit in a near-perfect circle, slouched in their chairs or curled into their wooden lockers, heads cast either up or down, eyes red and puffy.

From a young age, basketball players are drilled to not linger on the past. “Next play, next game” coaches repeat incessantly.

But what about when there are no more nexts?

The easy thing to do would be to shift that one-play-at-a-time mentality to thinking about the last play, that three by senior wing Wesley Saunders that bounced off the backboard and caught the wrong part of the rim.

“It looked like it was going in,” senior Jonah Travis said after the game. “From my view, it looked pretty good.”

Travis did not dwell on the miss at the time. His sole thought when the ball hung in the air?

“Go get the damn rebound,” he said.

It would be so much better for the players if they could just skip back a couple plays and dwell on a better one, like junior co-captain Siyani Chamber’s and-one three that put Harvard ahead of UNC with a minute to play, a string of words that would have seemed unfathomable a few years ago.

Chambers taking on of the country’s best point guards one-on-one after Saunders tapped him an offensive rebound? Him going around a screen, pulling up, and burying the shot?

That moment would be more representative of this team’s season.

This season, that started with a win against MIT and then a loss to Holy Cross. This team, that was ranked in the top 25 preseason but lost back-to-back games to nonconference opponents for just the second time since 2008; that took a one-game lead in the Ivy race, lost it, watched Yale squander its chance to clinch the conference championship in its final regular season game at Dartmouth, and then sent the Bulldogs home with a game-winning shot in a rare Ivy Playoff game; that never dominated but also never quit; that went 5-1 in one-possession games before facing UNC.

And Harvard battled against the Tar Heels, chipping away a 16-point deficit until Chambers gave his team its proverbial One Shining Moment.

“I think one thing we learned about this team is that we are fighters,” Moundou-Missi said. “No matter how tough the situation is, we can figure out a way to somehow get out of it.”

But there just wasn’t time to battle back once more after Justin Jackson made a jumper to tie the game and dunked to take the lead in the closing seconds Thursday.

Afterwards, though, a team cannot celebrate its fight. There is only win or loss, and postgame locker room scenes are equally binary in the NCAA Tournament.

This is the fault of the coach’s mantra. Next-play theory requires that the thrill of Chambers’ three must be forgotten before the ensuing inbounds pass is thrown. Meanwhile, the last feeling in a game seeps outside the moment, lingering with nothing to succeed it. Sitting behind the podium during the post game press conference, Saunders could not smile about the 26 points he scored. He could only cry about the three points he did not.

The same holds over the course of a season. Monumental wins like Harvard’s at Yale or against Yale in the Playoff are magical in the moment but then are immediately relegated to ‘part of the journey.’ And in a sport set up so that all but one of the country’s most successful teams end their years with a loss, that journey is almost guaranteed to end in disappointment, casting a shadow over all of the steps taken along the way.

But this is not just a basketball problem. It’s an everyone problem. We are all terrible at handling ends. In our minds, moments always lose out to results—in classes, in relationships, in any pursuit, really. Pre-terminal moments only get their due in regards to vacations, obituaries, and long-running television shows. Otherwise, in bundling all the memories together, we actually stack them, with the last one glued to the top.

Reflecting on his season, Moundou-Missi said, “This year especially was a roller coaster,” adding, “but that’s what makes it fun. It makes it exciting. We live for those moments.”

But what happens when those moments stop?

Before leaving the locker room so that the players could reflect—or at least try to—in peace, I talked to Travis. A smart guy whose biggest contribution to this Crimson team has been his unending motor and never-quit attitude, maybe he would have an answer to my question.

How long does it take to see more than just this loss when you think about this season, I asked.

“I honestly have no idea,” Travis said.

“I guess we’ll see,” he added, his voice shaking slightly.