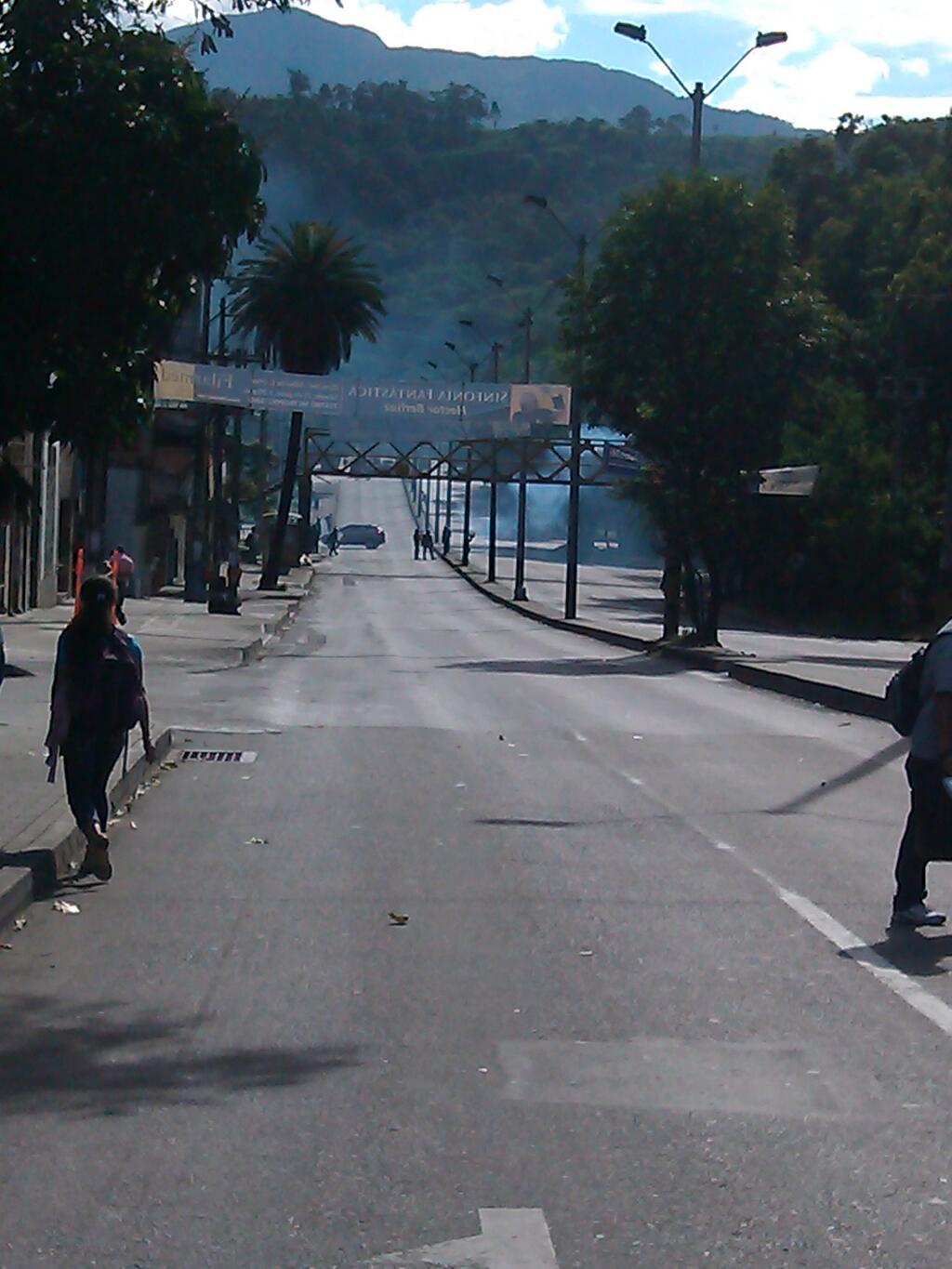 Tear Gas in the Distance after the Street was Cleared by Police. From @xanderotalvaro
By Michael C. George

I was chatting with the barista at the coffee shop outside my office in Medellin, Colombia as I watched him make my coffee—about his plans for college, the tattoo on his knuckle, about the peculiar version of paisa Spanish spoken in the city. My friends waited outside as the sun, a constant presence in the “city of eternal spring,” beat down on the people walking on the sidewalk. Cars honked as traffic snarled.

At first, I didn’t notice the growing cacophony of shouts, as the voices blended in with the ambient noise of the street. Suddenly, what sounded like an explosion pierced through our conversation, forcing me to look up from my coffee. Two of my friends shouted:  “Run! Run, Michael!”

“Run!” I looked up and saw it, a foreboding cloud rolling down the street, grey tentacles stretching towards me.  Soon, I felt it—my eyes stung as tears suddenly flowed down my checks. I froze for a moment and saw shrouded hooded figures emerging from within the cloud, trying to outrun its advance, before my smarting eyes forced me to join the fleeing crowd.

We ran back into our office and wondered what had just happened as the dull boom, boom of explosions continued, close to us—where had the tear gas come from? With memories of the Boston Marathon fresh in my mind, I was struck by the calm of everyone around me: the man with dreadlocks across from me was nodding his head to his Beats; the person beside him calmly typed away at her laptop.

I eventually wandered over to the office next door and asked some Colombians what was going on. Amused by my concern, a young man looked up and said, casually, that I shouldn’t worry.

It was only once I got home that I was able to find a news report describing what had happened: students known as encapuchados (“hooded ones”) had staged riots at the University of Antioquia across the street, forcing the evacuation of the school. They broke into the laboratories of Biology professors, threatened those present, and then turned their offices into a “war room,” to make home-made bombs known as papas bomba (“potato bombs”).  The rioting, and the large numbers of undetonated explosive devices with shrapnel necessitated the intervention of the National Police’s Anti-Riot Special Operations Forces and its Bomb Squad.  News reports linked the protests to the Revolutionary Armed Forces of Colombia, or the FARC, a guerilla group that has been in armed conflict with the government for 50 years.

My Colombian roommates later laughed when I told them I had been scared, explaining that such protests with papas bomba were common at public universities throughout Colombia. “The University of Antioquia has some of the best engineers in the country,” she said, “so they just use the chemicals they can get in their labs.” This cool, nonchalant non-response struck me as absurd when I tried to imagine a similar situation in the United States—Harvard students breaking into labs, preparing explosives, and lobbing them at the police.

Medellin is a city transformed. Twenty years ago, the “city of eternal spring” was the most violent in the world, with daily bombings and a terrifying murder rate of 381 per 100,000 people in 1991—if New York City had the same murder rate Medellin once had, 32,000 people would have died in 2012 rather than 414. Although Medellin’s current murder rate of 60 per 100,000 still dwarf’s New York City’s 3.8, the former headquarters of cartel leader Pablo Escobar has left its violent image far in the past: a shining new metro system has integrated the poor hill-side comunas into the city, and the government is building new schools, libraries, and parks in areas formerly paralyzed by chaos.

But how does a city with a history of violence, murder, and terrorism cope with violence in the future? What struck me is how the normalization of violence can change our reactions to shrapnel-filled bombs, explosions, tear gas, and sirens.

What happens when bombings become boring?

Times are changing in Medellin—the Association of University Professors released a statement declaring that the school could not be turned into a “battlefield.” “We expect expeditious and decisive measures,” they said, “beyond the usual routine announcements that are exasperating and useless.” The day after the riot, professors from the University’s Institute of Biology launched an indefinite strike in protest.

That day, I tried to focus as much as I could on my work, even though the Top 40 I was listening to was surreally interrupted by the deep roar of explosions every few minutes, followed soon after by the shrill wail of police sirens.

After one particularly loud explosion, a fellow intern and I could only look at each other and laugh at the absurdity.

“We have become used to these acts of vandalism being forgotten the next day,” the Vice Rector of the University would later note. “It cannot go on like this."