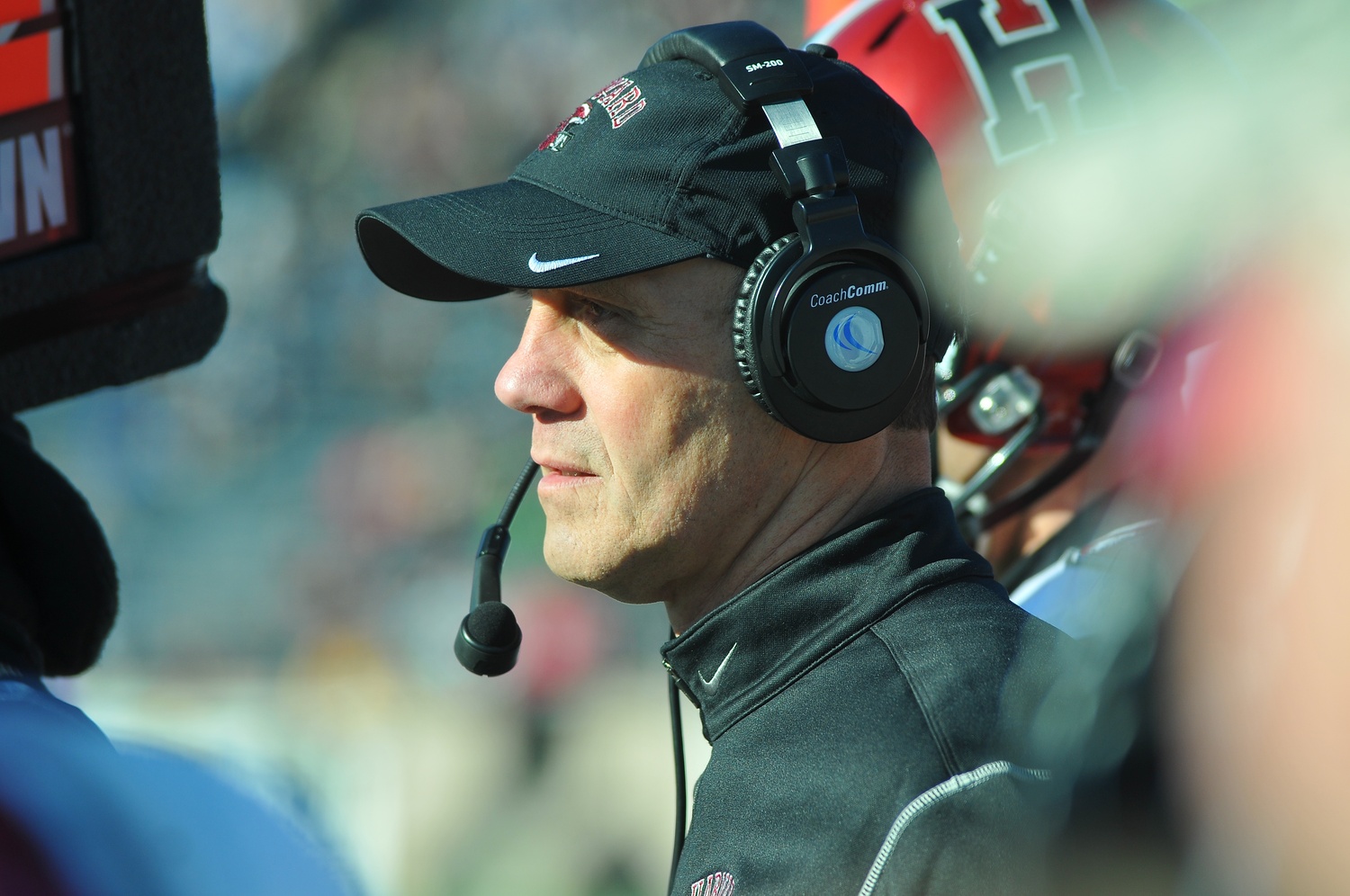 Harvard coach Tim Murphy led his team to a third-straight Ivy League title, which the squad clinched with a 38-19 win over Yale. By Robert F Worley
By Samantha Lin, Crimson Staff Writer

Murphy’s Law is a commonly known adage which posits that anything that can go wrong, will go wrong.

But just because your last name is Murphy does not mean that this law applies, especially if your first name is Tim and you coach the Harvard football team. In fact, there seems to be a very different Murphy’s Law in place in Cambridge, and the result is a system that not only doesn’t fail most of the time, but also refuses to fail.

The power of this system was out in full force on a crisp Saturday afternoon at Yale, as the second-longest college rivalry was set to play for the 132nd time.

Had the traditional Murphy’s Law held, the home team should have won—after all, Yale was facing a Harvard team that was reeling from its first loss since Oct. 2013. Harvard had seen its shot at an outright conference championship slip away with the defeat, and was dealt another blow when the team lost its top running back, senior Paul Stanton, who was so instrumental in the last two showdowns against the Bulldogs.

Murphy’s Law should have predicted that things would continue to unravel for the Crimson. That without Stanton, the offense would sputter and struggle to jumpstart as it had the past few weeks. That the defense, shaken from its confidence after giving up 35 points and essentially a share of the title to Penn, would falter.

And three-and-a-half minutes into the game, it appeared that this might be the case. The Bulldogs took the opening kickoff and marched 75 yards down the field, ending with a beautiful 28-yard touch pass from quarterback Morgan Roberts to receiver Chris Williams-Lopez to give Yale the early advantage.

But Saturday was not governed by Murphy’s Law, as the Bulldogs would quickly find out.

Under a minute later, the offense answered, through the form of freshman wide receiver Justice Shelton-Mosley, flying past his corner, to catch the 53-yard ball from quarterback Scott Hosch, in stride all the way to the end zone. The Crimson hadn’t scored in the first quarter in nearly a month, and this boost seemed to be all that its compatriots on the other side of the ball needed.

The defense, as if not at all rattled by the early touchdown, proceeded to hold Yale to 28 yards total offense over the next five drives. The Bulldogs did not make it into Harvard territory until the final drive of the half. Kicker Bryan Holmes lined up to try the 30-yard field goal attempt after being iced once with a Harvard timeout. Yale snapped, the kick was up, and looked good. But before the referees raised their arms, the sideline referee ran out—Murphy had called another timeout.

Was the second timeout excessive? Not in Murphy’s world. A minute later, Yale snapped the ball once more, Holmes booted the ball, and this time, it sailed wide right.

Murphy, it appeared, was making his own laws, because on Saturday, it appeared that Harvard could do almost no wrong. Setbacks became opportunities, and mistakes seemed to do no harm.

Not having Stanton shined the spotlight on Hosch, and the senior took advantage, surpassing Harvard’s single-season passing record en route to tossing for 320 yards and four scores. And even Hosch’s lone sizeable error—an interception late in the second quarter—became simply a two-minute interlude in the Crimson’s scoring deluge as the defense forced Yale to punt for the sixth-straight time. Less than three minutes later, Hosch found senior tight end Ben Braunecker, who clung onto Hosch’s fadeaway 18-yard touchdown pass.

Even when the Crimson couldn’t punch it in for six, sophomore kicker Kenny Smart—not the most reliable kicker in the Ivy League with a 56 percent field goal success rate—came through. Smart split the uprights on a 38-yarder, two yards shy of his career high.

A late comeback attempt by the Bulldogs might have worked against a different team, but not on this Saturday, not against this Harvard team, led by this particular senior class. The most recent group to spend four years in Murphy’s system, the 30 seniors on the 2015 Crimson squad will never know what it feels like to suffer defeat in The Game, have only lost four times in a Harvard jersey and were merely freshmen the last time a different Ivy team took home the conference title.

However, (Tim) Murphy’s Law is not applicable only to veterans. Sophomore Semar Smith, just two weeks back from injury, filled in for Stanton on Saturday and ate up precious clock with bruising runs to kill Yale’s comeback en route to the 38-19 win. Shelton-Mosley, in just his third month of Division I college football play, danced and spun his way to 153 all-purpose yards and four touchdowns.

This year will be remembered as a year when the Harvard football team made history with its first ever three-peat, and the players of this squad are certainly a large part of that success.

But even after Smith and Shelton-Mosley depart Cambridge and a completely new set of players enter the Harvard system, as long as Murphy is still at the helm, it’s hard to imagine that he won’t still be making his own laws, shaping those players into champions of their own right, and cementing his place in the history books.

—Staff writer Samantha Lin can be reached at samantha.lin@college.harvard.edu