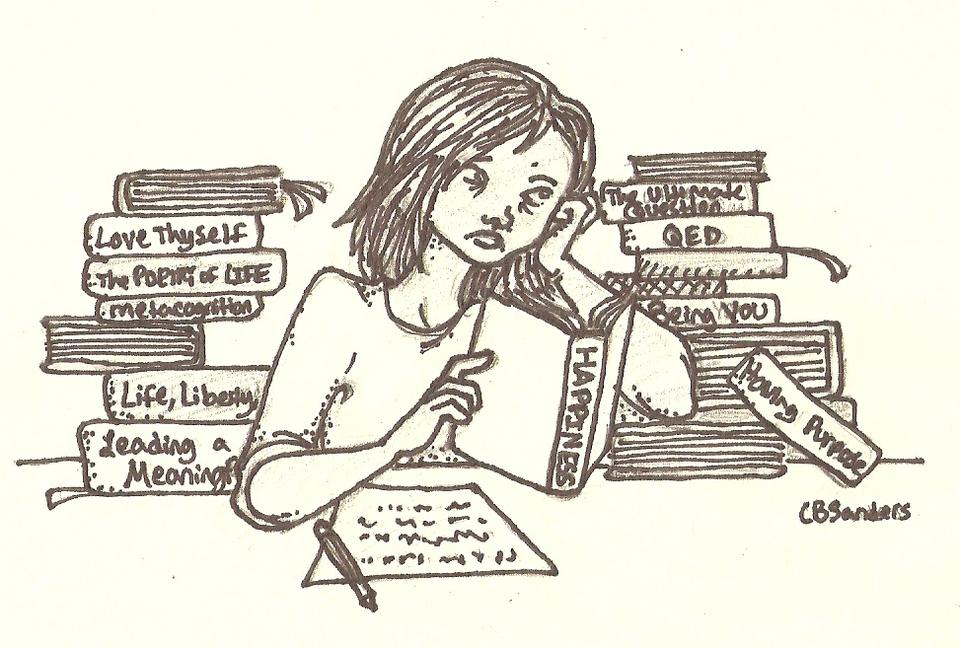 I said it to my Social Studies tutorial sophomore year and I’ll say it again: I’d be a happy pig over a miserable man any day. Mill offers various reasons why he thinks few people would agree to become one of the “lower” animals, including pride, independence, power, and dignity. None of those things really get me inspired to be an unhappy human being. And I certainly wouldn’t care much about them if I were a pig (though future pig research may prove me wrong). Give me some slop and some mud, and you can go on contemplating the meaninglessness of life.

The memory made me wonder whether Harvard students’ intelligence may be the cause of our higher-than-average rates of depression and suicide.

Many point primarily to Harvard’s pressure-cooker failure-shaming environment. Lord knows that there is truth to that characterization, though I would argue that your average Harvard student pressures himself infinitely more than anyone else does.

What, though, converts this pressure-induced stress into chronic depression and suicidal thoughts? High intelligence may be the culprit.

Though I could find no study showing a correlation between generic depression and intelligence, psychologist James Webb reports that highly intelligent people are more likely to suffer from what he terms “existential depression,” which entails struggles with certain basic issues of existence: mortality, freedom, isolation, and meaninglessness.

Translation: Death is inevitable. No one can decide what life path you should choose but you, and there are no absolute standards by which to judge your decision. No matter how close you grow to another person, a gap will always remain. “Meaninglessness stems from the first three,” Webb explained after waking up on the wrong side of the bed. “If we must die, if we construct our own world, and if each of us is ultimately alone, then what meaning does life have?”

Existential crises are a universal phenomenon, of course, but they seem to happen particularly frequently and severely with Harvard students. Perhaps our analytical or secular tendencies stubbornly refuse to allow us to ignore the absurdities of life. Perhaps Harvard students take an unusually nasty shock to their sense of place in the universe when they discover that they are no longer smarter than everyone around them or destined to change history.

Woody Allen once said, “It's very hard to keep your spirits up. You've got to keep selling yourself a bill of goods, and some people are better at lying to themselves than others. If you face reality too much, it kills you.”

Cynical? Sure. True? For a lot of students here, yes.

My hunch is that being intelligent makes it harder to sell yourself a bill of goods. A lot of Harvard students are overextended, unhappy, concentrating in subjects they dislike, and entering careers they have no interest in. They know it, too, but won’t take the pressure off themselves for fear of admitting defeat. For some, depression and suicidal thoughts may result.

For many Harvard students, college is a brutal cycle of crushing course loads, demanding extracurriculars, endless deadlines, lack of sleep, frayed nerves, loneliness, and numbing, debaucherous escapes. Some eventually question whether Harvard is really worth it in the end.

“Why can’t I hack it? Besides, is the opportunity to go spend a few more years of my life in another potentially highly stressful environment – whether it’s Wall Street, consulting, medical school, or law school – worth being unhappy and stressed during the four years that many of my friends are spending at party schools? If it’s not, then why am I here? And how could I leave without having to endure the barely concealed judgment of classmates, friends, and family who thought I could handle Harvard?”

Obviously I cannot presume to fully understand anyone else’s depression, and the picture of mental health at Harvard that I’ve sketched is not comprehensive. But I believe it is part of the reality, and having a better understanding of why the Harvard personality type may be converting school stress into existential crises allows us to more effectively help those suffering from depression on campus. For better or worse, we are a campus closer to the Socrates end of the spectrum than the fool end. We need mental health resources that can address the accompanying unique concerns (since pig reincarnation, scientists tell us, is decades away).

Oftentimes, though, no therapist or Tumblr or voice on a hotline (useful as they are) can substitute for another regular human being who’ll sit in front of someone they can sense isn’t quite right, look him or her in the eyes, ask what’s wrong, mean it, and listen. We all have a responsibility to be that person, and there’s no shortage of students here waiting for someone to reach out.

Wyatt N. Troia ’14, a Crimson editorial writer, is an economics concentrator in Winthrop House. His column appears on alternate Fridays.