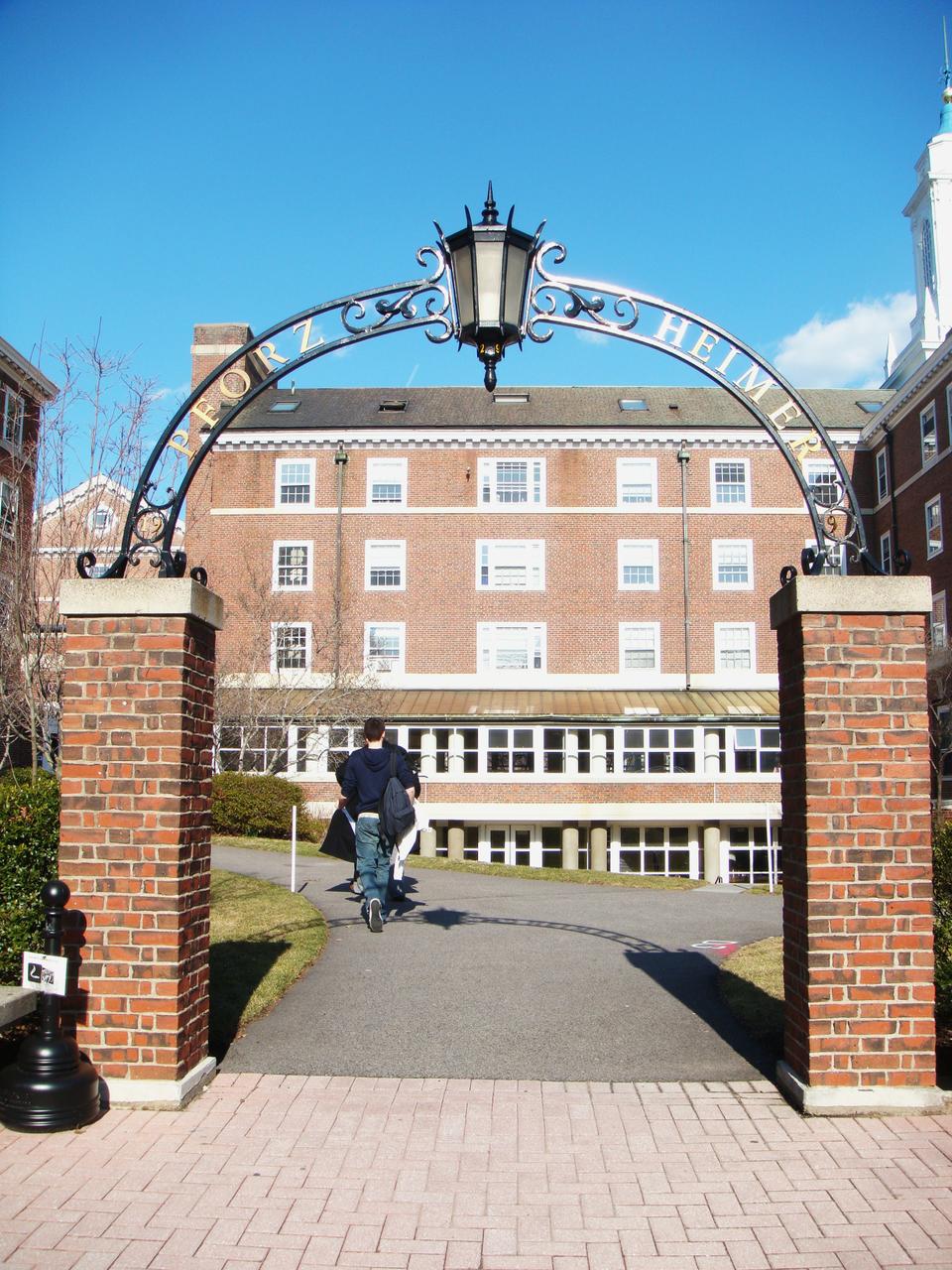 “Pfuck my life” is what you might mistakenly think upon discovering a Pfolar bear at your door on Thursday morning. Sure, there are closer places to live than Pfoho, but the rabid enthusiasm of Pfohosers, tutors, and House Masters alike is a testament to the fact that Pfoho is among the better Houses. Pfoho is a tightly-knit, pfamily-style community of pfriendly people who like to hang out and have a good time. Incredible rooming and a social layout make Pfoho an awesome place to meet new people while not getting too n-1 close for comfort. Home, sweet Pfohome.

Dining Hall: Although all HUDS food has that I'm-not-quite-sure-what-this-is-but-it’s-probably-chicken taste, Pfoho boasts some of the (comparatively) most delectable food on campus due to simply having fewer mouths to feed. Pfoho's bright linoleum palace is home to the only two-tiered dining hall on campus. The lower level is more social, and tables are often combined for a large group dining experience, while the quieter upper level is perfect for homework, intimate conversation, and avoiding people—a sometimes impossible task in the community-oriented Pfoho. The hilariously awkward Lover's Balcony protrudes over the rest of the dining hall and provides one of the most romantic yet voyeuristic dining experiences on campus.

Pfoho also has arguably the best brain break in the Quad, and hungry Currierites and CaBOTS can be found scavenging late at night when their own d-halls have proved scarcer. The Pfoho d-hall may lack the portraits-of-old-white-guys charm of some of the River Houses, but there's never that awkward moment when you cannot locate a seat.

Score: -100 for boring linoleum and so-so decor, +75 for being able to find a seat without bribes or death threats, +25 for Adams D-hall swipe access

Common Spaces: Pfoho is home to arguably some of the most utilized common spaces of any House on campus, probably because the old Harvard pretension is sacrificed for practical utility and student needs. The Holmes Junior Common Room is not glamourous, yet its central location, pool and ping pong table, proximity to the Grill, and constantly-tuned-into-football TV make it a sure bet for finding another pfolar bear to chill with any night. The Wolbach JCR is also heavily used—its kitchen and DVD player make it a common study break location and couch potato convention center. The Holmes Living Room, Senior Common Room, and Comstock Living Room are less heavily utilized but have more old-Harvard elitist charm.

Most Pfohosers have a love-hate relationship with the Pflibrary—love in the sense that you can show up in your pajamas, slippers, and Snuggie; hate in that it's a library and who ever looks forward to that? Nonetheless, the House Elves and House Masters Nicholas and Erika Christakis make work more bearable by bringing in occasional treats and baked goods for the late-night long haul.

Score: +15 for the average number of bros watching football at the Holmes JCR TV

Rooms: Un-pfreaking-believable. Almost everyone (except for a small population of unlucky sophomores) is guaranteed a single for all three years. It's possible for sophomores at the bottom of the housing lottery to get something as excessive as a 230 sq. ft. single. Sophomores live in mostly smaller suites of connected (but not walk-through) singles while juniors and seniors can take their pick of a top floor duplex suite in one of the three “bricks” (Holmes, Comstock, or Moors) or a highly prized wood-floored gargantuan suite in Wolbach. Jordan overflow housing—the Quad of the Quad—is actually highly desirable, as accommodations resemble DeWolfe without doubles—complete with cable TV, massive common rooms, and a kitchen. Sociable hallways in most of the House create a better sense of camaraderie with fellow floormates than the sometimes isolating and stair-intensive entryways of other Houses (by the way, we have elevators). Pfoho is also home to the infamous Belltower Suite, which consists of three interconnected quads, making it a 12-person party room complete with a built-in bar and the one of the largest common rooms on campus.

Score: +230 for the size in sq. ft. of this correspondent's sophomore year single

House Spirit: It is impossible to escape Pfoho pride. Brace yourself to have the letters pf attached to everything, an endless source of glee to those who spend 90 percent of their waking hours on Pf-Open—the be all and end all of House open lists that has posts ranging from event advertisements, requests for missing socks, to rabid pflame wars when someone gets “offended."

Pfoho's small size and sociable layout make it feel like a big family. The House staff is unbeatable and extremely popular. New House Masters Nicholas and Erika are very well-liked and known for occasional mischief (such as dressing up in a Pfolar bear suit and attacking a fake Kirklandite to celebrate Pfoho's victory over Kirkland in the House Life Survey). Other notable House figures include “Super” Mario, the beloved building manager and the Harry-Potter-esque House Elves.

Pfoho hosts some of the best d-hall dances on campus, such as the 90s dance and Make it Rain, which some old pfalums even flew in from around the world to attend this year (kind of wish we were kidding about this). The annual Miss Pfoho and Pfamily Pfeud events give House mates a chance to embarrass each other and themselves. It's the people and House spirit that really give Pfoho its oomPf.

Location: Great—if you're into cross-country running, waiting for broken down shuttles in the rain, and getting stabbed in Cambridge Common. Yes, your River friends are going to complain every time you beg them to come visit you. Nevertheless, the distance is over-exaggerated (it's a tad closer to the Science Center than Mather House is) by whiny Harvard students. The perception of Pfoho as literally “in the North Pole” and the lack of Harvard buildings on Garden Street make the House seem mentally farther away than its equidistant River counterparts. But despite the Quad's perceived isolation, some appreciate the separation of class and home, nearby Fresh Pond, and large selection of new restaurants and stores on Mass Ave. Plus, legend has it that 90 percent of Pfohosers meet their future spouse on the 9:50 a.m. shuttle. Legend also has it that 90 percent of accidental ass-grabbings occur on the absurdly overcrowded 9:50 a.m. shuttle.

Score: -400 for every tear shed watching the empty Mather Express drive by 8238494372 times at the Memorial Hall shuttle stop, +25 for Shuttleboy, a chivalrous gentleman who ALWAYS texts back

Quirks: Make the other Quad Houses jealous at the Pfoho Grill, an essential stop for that late-night mozzarella stick. Be sure to attend a Pforum, a roughly monthly occasion in which big names from a variety of fields (Daniel Gilbert was one of this year's guests) come to speak to Pfoho after a tastier-than-dining-hall meal. There's a sound studio in the basement for the musically talented, and noise-proof music rooms for the not-so-musically-talented. Plus, there's Pfojo, Pfoho's brand new yoga/dance/martial arts studio. Finally, be sure to check out the sexist remnants of the Radcliffe days, such as three-paneled mirrors in every hallway that everyone subtly uses to check him/herself out, and hooks to prop open the doors a few inches (literal cockblocks).

+1971 for the year that Radcliffe merged with Harvard