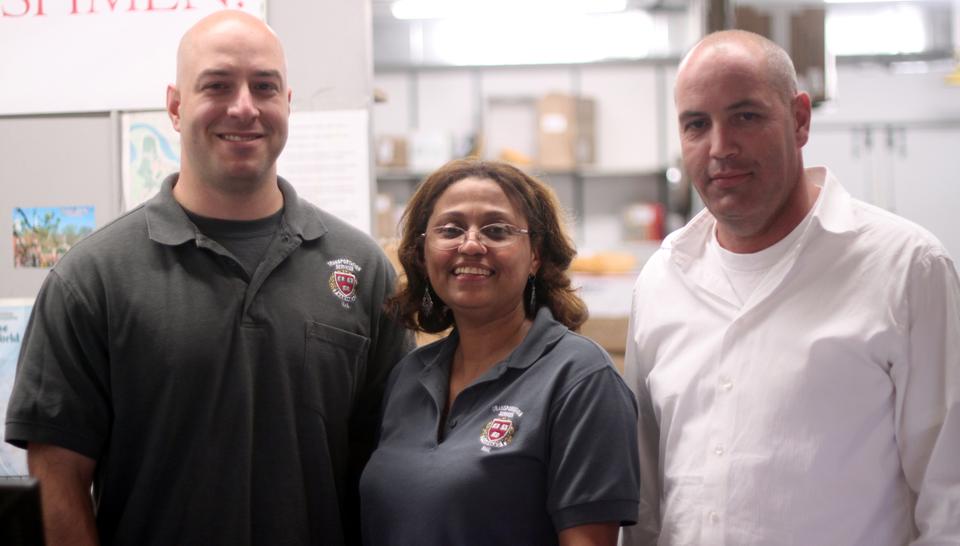 Originally from Algeria, Kerkache moved to the United States in 1994. "Love brought me to America," he said, declining to divulge any further explanation. His second day in the country, Kerkache signed up for English as a Second Language classes and began looking for work. "I worked at Stop & Shop for a month; I worked for two months in a bakery in Watertown … I worked at Harvard Law School—as a counselor to the lawyers," he said with a laugh. Eventually, however, Kerkache found a lasting home at the Harvard Yard Mail Center, where he has worked for the past 15 years.

"I liked it here, so I stayed here," Kerkache said. Initially hired as a casual employee, Kerkache worked his way up from the part-time position. "Now, I am a general with three stars." Perhaps no other general responds to the call of duty quite as enthusiastically as Kerkache. Commuting an hour from his home in Cumberland, Rhode Island, he arrives at the mail center each morning ready to work. "I open the place up, I start checking e-mails from Harvard, and I wait for the happy faces," he said, referring to his co-workers.

Indeed, it is the happy faces and camaraderie among the mail center employees that Kerkache said makes his job more fun. "We have a very enjoyable atmosphere here. That's the personalities of the others and myself," he said. "We all get along." Kerkache also enjoys the diverse backgrounds of his co-workers, who hail from the Dominican Republic, Senegal, and America. "It makes it so spicy. It's a very good taste when you have people from all over the world."

The colorful personalities and friendly atmosphere of the mail center—a place where banter and laughter flow freely—have also allowed Kerkache and his co-workers to form unique friendships with students living in the Yard. "We love them, and they love us," Kerkache said. "Sometimes they don’t have any packages, and they just come to say hello." And while seeing freshmen leave the Yard each May is sad, Kerkache said that many continue to stop by the mail center even after they have moved into upper-class houses. "They keep coming to visit—they like it," he said. "They're great. A lot better than Yale University students."

With colorful co-workers, friendly students, and the occasional canoes and car parts that come through the mail center, Kerkache said that he loves "everything" about his job. "There is no place, no department like this department. I love it here. Harvard is everything I love. That's why I come here so early."