Harvard Beats Yale ... When It Comes to Trademark Rules 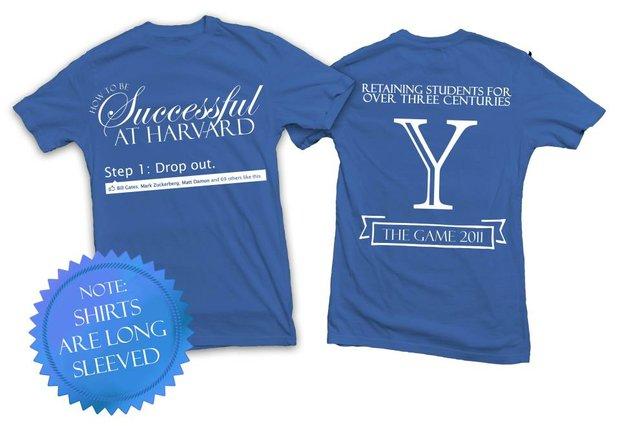 Harvard denied Yale the satisfaction of printing one snarky t-shirt as the Yalies wanted, scoring a Crimson victory in the world of trademark restriction before the victory that we all know is coming on the football field on Saturday. The original design for the shirt in question, which was created by the Yale Freshman Class Council, showcased the words "How To Be Successful at Harvard." Under that, the words "Step 1: Drop Out" were printed in the style of a Facebook post. That supposed post was "liked" by  "Bill Gates, Mark Zuckerberg, Matt Damon and 63 others."

But when the Yalies brought their shirt to their dean's office, according to the Yale Daily News, they were told to contact Harvard's trademark office before going to press. And that was where things got messy.

In an emailed statement, the trademark office explained to Flyby that it objected to the use of celebrities' names in connection with Harvard.

"We have a long-standing policy that does not permit the use of Harvard's trademarks with third-party trademarks or celebrity names," the office wrote. "The Harvard Trademark Program asked that the design be modified before approving it in accordance with the University's licensing policies."

The new version of the shirt makes reference to the star Harvard dropouts without giving their names. Instead, it reads: "People who like this also like Social Networks, Personal Computers, and Roads Not Taken."

But we already knew that Yalies appreciate "roads not taken." They haven't taken the road to victory since 2006.