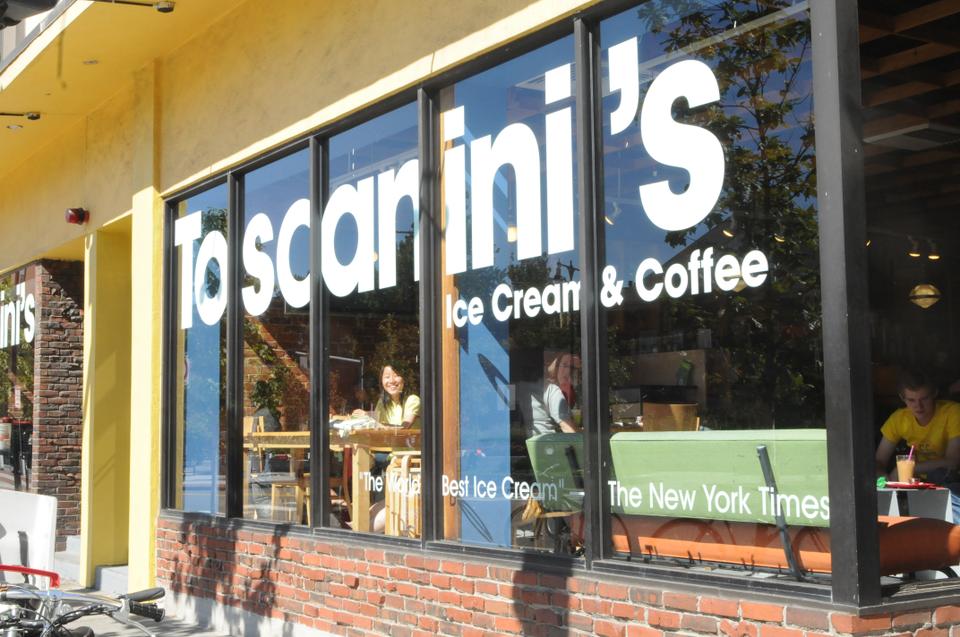 We love Finale as much as the next people, but constantly kicking it Square-side can get a little dull. In the spirit of changing things up, we decided to visit three sweet eateries that are ever so slightly off the beaten path. Each is within fifteen minutes of the Yard, and well worth the minor trek. Let your sweet tooth spread its proverbial wings!Toscanini's

Though we can't find documentary evidence of such an occurence, Toscanini's website proudly proclaims that the Central Square establishment has been hailed by the New York Times as having "the best ice cream in the world." After journeying to the storied storefront, we are inclined to agree. Once we explainined our mission to the employee "on line" (a taste of Toscanini vernacular), we were offered samples of some of Toscanini's most popular flavors.

First on the docket was B3 (brown sugar, brown butter, brownies). Sales of this flavor are exponential (get it?), and having experienced its milky decadence, we understand why. Next we tried burnt caramel. This is a more polarizing flavor on account of its bitterness. We were a perfect case-in-point. ("Meh," said Connie. "DELICIOUS," gushed Emma.) Third up to bat was khulfee, which our server offered us as an example of a flavor you won't get anywhere else, and as representative of the diversity of the Central Square community. Khulfee is an Indian flavor combination that joins cardamom, almonds, and pistachio nuts.

As we indulged in our samples, we chatted with our server, a Cambridge-raised three-year employee who cited "proximity to ice cream" and a community of regulars as her favorite parts of working at Toscanini's. She told us that each day brings changes to the menu. Over the course of the year, 300 to 400 flavors will appear on the list of daily offerings. This wealth of options ensures that at Toscanini's, there is something to satisfy any palette. And for those wary of flavors off the beaten path, all your standards are still represented. Most days, there are even vegan options. Not a fan of ice cream (there must be one of you out there)? Toscanini's doubles as an espresso bar, complete with pastries and tea.

Variety isnt the only thing Toscanini’s has going for it. The ice cream you eat here is all made in the back. In our opinion, its quality is unparalleled. We're fans of J.P. Licks (albeit, not of its bagels), and Emma has paid an estimated ten visits to the Ben & Jerry's Ice Cream Factory, but a single trip to Toscanini's was enough to convince us that, when it comes to ice cream, Central Square is where it's at. And since the location is computer friendly in the extreme (there is reliable Wi-Fi and a centrally located table equipped with outlets and Lamont-style lighting), we plan on returning during reading week to drown our doldrums in several scoops of ice cream.

Sofra, an offshoot of the celebrated sit-down restaurant Oleana, has been open for almost five years. Following our visit, we are determined to spend the remainder of our Harvard careers making up for this half-decade of lost time. Each dish we sampled was truly unique and delicious—a couple, mind-bogglingly so!

To understand the mission of this tantalizing storefront, one need look no farther than the awning. Manager Ayse shared, "Sofra is a shared Turkish and Arabic word meaning 'a spread'—a table that has an array of dishes from sweet to savory… a table of celebration, of hospitality." In keeping with this emphasis on inclusiveness, Sofra's menu draws inspiration from a wealth of Middle Eastern cuisines. Turkish, Moroccan, Lebanese, and Egyptian all figure into the unique equation that makes this bakery unlike any other. Ayse explained that most of Sofra's recipes are not adapted from a single dish from a single country, but rather, "draw on the crossover of recipes."

I (Emma) do not think it is an exaggeration to dub the tiny mug of Turkish coffee I enjoyed a revelation. It is usually a good sign when your first thought is, "Does this contain chocolate?" It turns out all it is, is finely ground, unfiltered, stovetop brewed coffee, helped along only by a tablespoon of sugar.

Over the course of an indulgent half hour, we sampled eight items. Our agreed upon favorite was the kunefe. Ayse told us that this pastry, a sweet cheese custard that is soaked in star anise and clove syrup and topped with shredded filo dough, is often overlooked on account of its size (it is on the smaller side) and foreignness. But she thinks it's one of the best pastries Sofra has to offer. We concur.

Ayse described the pistachio Pop-Tart as a prime example of Sofra "taking ingredients that are traditionally used in the Middle East and twisting them into an American pastime." Compared to ordinary Pop-Tarts… well, there is just no comparison! Sofra's take on the pre-packaged snack boasts an exterior that is equal parts flaky and chewy, and a chunky pistachio filling. Biting into the whole of it provided just about the most unique experience of textures we have ever encountered.

The most popular pastry we tried was the morning bun. This item, which consists of chunks of croissant glued together by orange blossom glaze, has apparently developed something of a cult following. We empathize wholeheartedly with those who have fallen under its sticky-sweet spell.

Za'atar finger bread is not as obviously decadent as some of its pastry counter companions, but its taste is the one that has remained most in our minds. Za'atar is a spice mix that combines wild thyme, sumac, and sesame seeds. It is common in Palestine, Lebanon, Israel, and if we had our way, would be as perfunctory a condiment stateside as salt and pepper.

Even if most Harvard students haven't visited Flour, they are familiar with its story. Joanne B. Chang '91 graduated from Harvard with a degree in Applied Mathematics and Economics. She entered the culinary world several years later, after deciding she would rather be a cook than a consultant. In 2000, following stints at a handful of well-known restaurants, Chang opened the first branch of Flour. The bakery/café is now among the most celebrated storefronts in the Boston area.

Connie was feeling sick the morning we'd appointed for our trip to the MIT branch of the famed eatery, so I (Emma) hopped aboard the bus solo. Less than fifteen minutes later, I was contemplating my breakfast options. Flour boasts a spacious storefront, with a long counter and a large number of shockingly un-crowded tables. As I waited on line I noted the following options, each of which looked just as delicious as its name suggested: berry bread pudding, sticky bread pudding, two varieties of breakfast pocket, breakfast pizza, vegan chocolate cake, sour cream coffee cake. There were also a variety of muffins, and enormous airy meringues (so enormous, in fact, that the corner of one shielded the product's official name from view). After a deliberation session that endured as long as the line did (and could have continued), I settled on the breakfast special: French toast on focaccia with maple syrup.

I don't ordinarily go for daily specials, but this is an occasion where I am proud to have strayed from the beaten path. In recent years, there's been a perceptible movement toward the outrageous in the world of French toast. Cheesecake or strawberry stuffed incarnations of the simple dish have become increasingly common. Having sampled each of these fussy variants, it was a true delight to enjoy a slice of simple, delicious French toast. Where ordinary bread often tends to go to mush under the pressure, the sturdiness of the focaccia enabled it to hold up in the face of being drenched first in egg, then in syrup. Its chewiness, and slightly sour aftertaste, lent the dish a lunch-like, savory dimension that played well against the sweetness of the sugar and syrup.

I had the good fortune of sitting next to a family that decided to sample a variety of items. The sticky bun was described as "amazing;" the orange juice as "absolutely fresh." High praise also went to the quiche: "It has the texture of custard. It's wonderfully delicate and delicious."

They also tried the breakfast sandwich. Had I not been reluctant to go savory, considering the sweet bent of this article, I would absolutely have ordered this popular offering. As I sat enjoying my French toast, I had plenty of opportunities to admire it the sandwich from afar: creamy pat of egg (also described as custard-like), shiny arugula, puffy roll. I will return for you!

The atmosphere of Flour is almost as inviting as its menu. The breakfast area buzzes with the conversations of families and friends; an MIT student sat to my left, simultaneously working her way through a berry muffin and a p-set. Dishes are created in full view of customers: employees hard at work crafting sandwiches and cakes alike are backlit by a wall that bears the admonition: "make life sweeter…eat dessert first!"

If you say so, oh divine bakery.