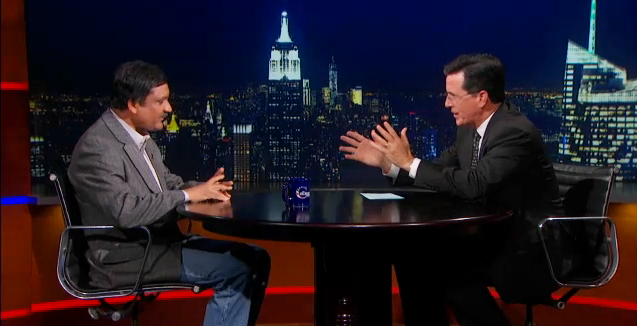 In an appearance on the Colbert Report Wednesday night, the MIT professor laughed and went on the defensive as his host poked fun at what he once referred to as “the edX.”

As Agarwal described edX’s mission of providing college courses over the internet, Colbert cut in. “University of Phoenix, you can do that. No, I’m serious. You can do that. They advertise on my show. Right? Same thing!”

Agarwal clarified that these courses originated from top-tier institutions including edX founders Harvard and MIT, prompting Colbert to quip that he had “heard of” those universities.

(Heard of? Good to hear that your hour-long interview at the Institute of Politics from 2006 was so memorable, Stephen.)

Above all, the satirically right-wing TV pundit was aghast over edX’s free offerings.

“I don’t understand,” Colbert lamented. “You’re in the knowledge business in a university. Let’s say I had a shoe store...and then I hired you to work at my shoe store. And you said, ‘Hey, I’ve got a great idea! Let’s give the shoes away for free.’ I would fire you and then probably throw shoes at your head.”

Colbert also alluded to the debate between access and exclusivity, questioning whether edX diminished the value of a college diploma. “Let’s say I go to your Harvards or your MITs or your Berkeleys out there,” he quipped. “I get to say, “I went to Harvard.” That’s half of what you’re paying for.”

In an afterthought, Colbert added, “Actually you wouldn’t say, “I went to Harvard.” You’d say, ‘I went to a small college in the Boston area.’”

In response, Agarwal acknowledged that online education cannot replicate the “on-campus magic” of learning in a traditional college environment. He named peer interactions, late-night discussions, and inspiration from professors as irreplaceable aspects of campus life—but not before Colbert could chime in with his own addition to the list: “homoerotic frat hazing.”

“Online, no one’s going to ask you pass a greased 45 record from buttcheek to buttcheek before they’ll call you brother,” Colbert said.