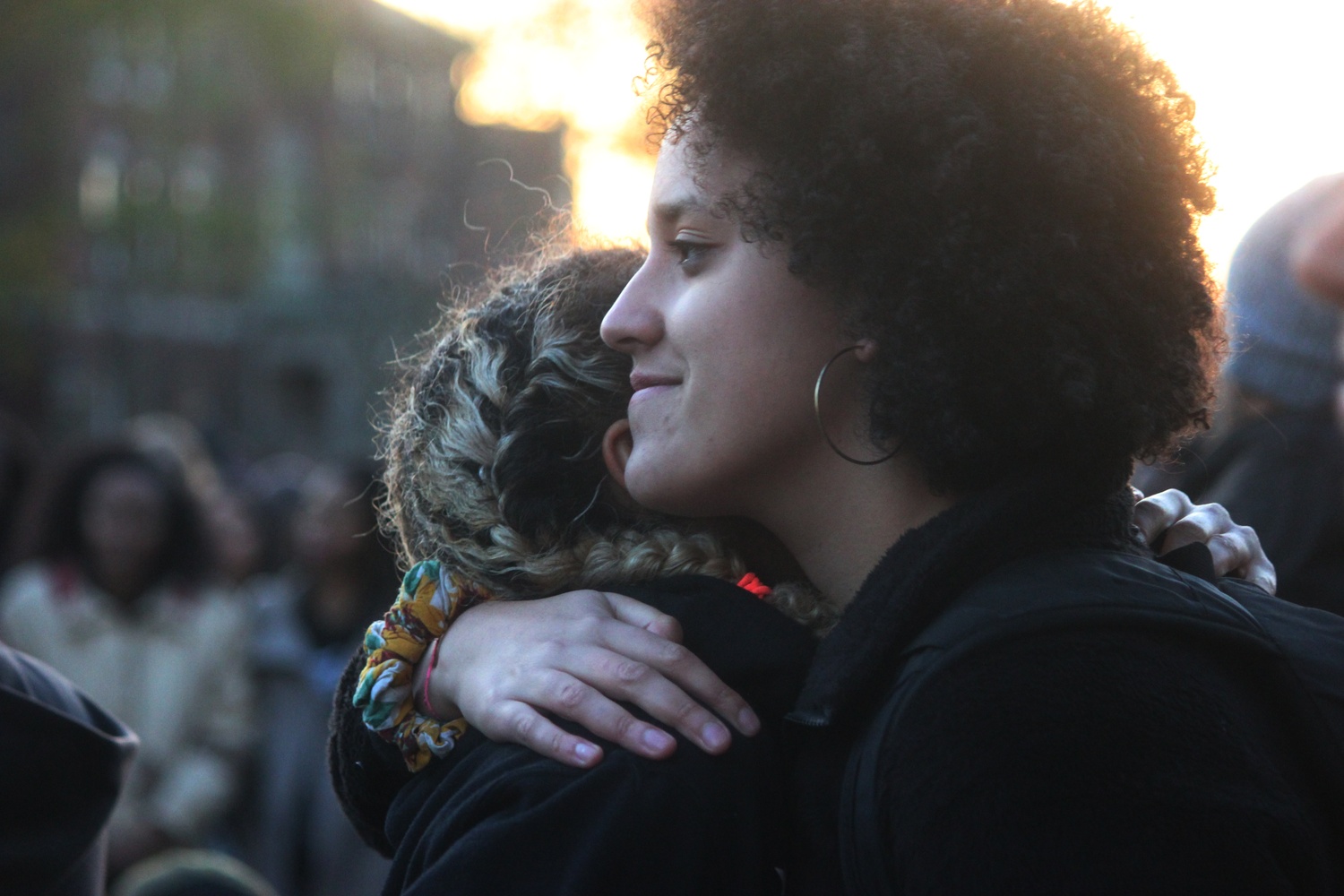 Kimiko M. Matsuda-Lawrence ’16 and Jenny A. Gathright ’16 embrace after performing a spoken-word poetry piece during a rally for National Call to Action Day. Members of the Harvard community gathered to march in solidarity with those who have been affected by recent incidents of racism and discrimination on college campuses. By Lauren A. Sierra

Hey, Harvard. There are just eight more days of classes, so get psyched for finals. In more relevant news, today is the anniversary of the Gettysburg Address.

Get ready for a cloudy day today with temperatures in the low 50s and a chance of rain in the early evening.

Turkey and cranberry sauce in the sandwich bar

Biscuits and pound cake with toppings

Meet the Scooterers of Harvard
Come on, we all get jealous of them as they scooter past us to class.

Love it or Hate it: Iced Coffee in the Winter
Very contentious.

Radiate: The Harvard-Yale Tinder
An app for meeting new friends this weekend.

Dear Dartmouth, Here’s Some Advice
We have some advice for you about the housing system #youareverywelcome

Anatomy of a Harvard Yale Outfit
You may have it all figured out, but you’re missing one key detail. What are you supposed to wear to the The Game? FM is here to help with some basic pointers for the clueless collegiate.

Students Rally in Support of Black Activists at Peer Schools
Dozens of students and Harvard affiliates gathered in the Science Center Plaza on Wednesday afternoon to rally in support of black student activists on other college campuses, where mass protests against racism have erupted in recent weeks.

HBS Receives $20 Million Gift From Kraft Foundation
The Robert and Myra Kraft Family Foundation, Inc., has pledged to donate $20 million to Harvard Business School to endow a fund to support research and the advancement of precision medicine.

UC Candidates Debate Free Speech and Final Clubs at IOP
Debating at the Institute of Politics on Tuesday, candidates in the Undergraduate Council’s ongoing presidential election weighed in on recent debates about race relations at peer schools and the role of Harvard’s final clubs on campus.

Fitzsimmons Voices Concerns About Common App Alternative
Weeks after a consortium of more than 80 colleges and universities said it would release an application platform to rival the Common Application, admissions experts and Harvard officials are skeptical that the new portal will actually make higher education more accessible to under-resourced students, as the group claims.

If you’re interested in 3-D printing at Harvard come to this introductory session at Harvard Hall 103 at 6:00 p.m. There will be pizza and the chance to have your creation printed. RSVP at http://goo.gl/forms/z1EbkvDkAs and download Fusion 360 before the event.

The Harvard-Radcliffe Orchestra is putting on a concert with pieces by Prokofiev, Ravel, and Rachmaninoff in Sander’s Theatre at 8:00 p.m. Tickets are available at the Harvard Box Office, from HRO members, online, and at the door for $10/15 for students and $20/25 for adults.

Stand with Sexual Assault Survivors: Harvard Rally for Action is today at Massachusetts Hall from 2:00-4:00 p.m.

DAPA and The Center for Wellness are hosting Beyonce Glow Yoga, glow in the dark flow yoga set to Beyoncé songs, in Harvard Studio 74 from 9:00-10:00 p.m. Make sure to RSVP online.